‘Modern life is against crime and the enjoyment of crime’

A veteran of children’s books and crime fiction, Anthony Horowitz tells Bhavya Dore why he chose to change the rules of the murder mystery 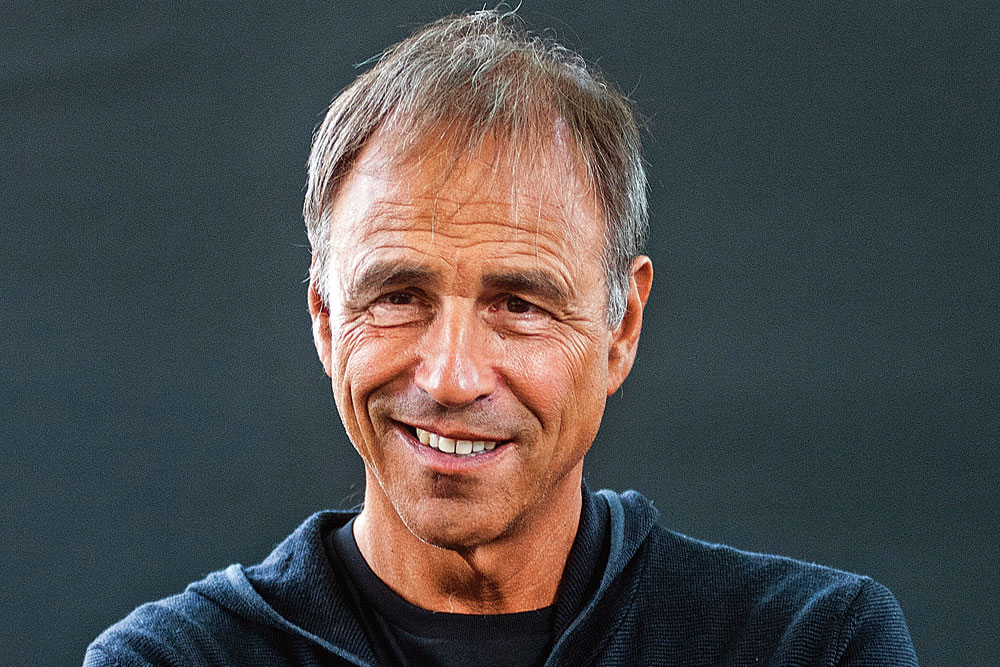 
BRITISH NOVELIST AND screenwriter Anthony Horowitz is most well known as the best-selling children’s author of the Alex Rider series which follows a teenager recruited to spy for MI6. He has written 50-plus novels; Poirot and Midsomer Murders, detective series for television. He was commissioned by the Arthur Conan Doyle estate to write the first official Sherlock Holmes novels since Doyle, The House of Silk (2011) and Moriarty (2014). He has also written two official James Bond novels, Trigger Mortis (2015) and Forever and a Day (2018), following a commission by the Ian Fleming estate. Horowitz’s latest novels The Word Is Murder and The Sentence Is Death feature himself as a writer following Hawthorne, a sharp, brooding detective as he solves a crime. On the fringes of the Tata Literature Live festival in Mumbai, he explains how crime fiction fulfils a very human yearning for the truth. Edited excerpts from an interview:

How did the Hawthorne series start and why did you put yourself in the books?

It began when my publisher asked me to write a series of murder mysteries. I’ve been writing murder mysteries on television all my life. But never in books. I began to think, what can I do that’s different? So I started with who is the detective? Is he going to be English or from somewhere else, tall or short, male or female, married or unmarried, gay or straight? The more I thought, the more I realised everything had been done. There’s been every sort of detective there can be—even a robot and a vampire detective.

So I began to think, how can I change the whole structure of the murder mystery? I had this idea, if the author is inside the book, everything changes. Because normally Agatha Christie or Arthur Conan Doyle sits on the mountaintop and sees everything. Before the book begins, the author knows who did the murder. But if the author is in the book, he knows nothing. And I am in the book as the most stupid person. I don’t even have a book unless Hawthorne solves the murder. It makes it more fun for me, and I hope for the reader, who is getting the same clues, suspects and red herrings, but in a way that is fresh and unexpected.

It still plays off the all-knowing detective against the bumbling counterfoil familiar from Christie and Doyle.

Conan Doyle is the grandfather of the modern detective novel and his invention was to have Sherlock Holmes as clever, distant, superhuman, somebody who isn’t even very likeable. And Doctor Watson, what we now call the sidekick, the friend, the person like the reader who knows very little. And Christie admitted she borrowed from Doyle. It’s a brilliant triangle: detective, sidekick and reader; and reader and sidekick are on the same level.

Is there something distinctive about British detective fiction? Why has it been so successful?

England lends itself well to murder fiction, being small, full of little villages. Murder somebody in a village and everybody knows immediately. They also know everything about that person, because in an English village, everybody knows everything about everyone. That’s why these books do well in an English climate. Also, the English has a characteristic, we tend to hide our emotions, we don’t wear our emotions upfront… What’s great about detective fiction is it pulls apart those curtains.

What did you change when you moved from children’s books to adult books?

I’m not the sort of writer who is completely aware of technique. I know I do things differently but I’m not entirely sure how. I think it’s just the characters are more grown up, the emotions are more adult, there is some sex, the violence is slightly more explicit. What still matters to me is the pace, the adventure, the surprises and the narrative. I think of books as being like a river and what I’m looking for when I write is the flow, when you dive in you’re swept down the water and carried away.

Does it make it harder to write whodunnits now that we have gadgets, modern crime-solving techniques, forensics, CCTVs?

It does. I like writing novels set in the 1950s because life is slower and you have more time to think. One of the problems of writing mysteries in the 21st century is the answer is in your telephone. Holmes can work out everything about you by looking at you. I can work out everything about you by Googling you. The first is more fun and interesting so I prefer leaving technology out of it. But don’t forget, with modern crime, most murders are solved in 24 hours. When you commit murder… you will be caught. You will leave your DNA. Modern life is against crime, and the enjoyment of crime, for that you have to go back to the golden age of crime, which is what I most enjoy writing.

Along with crime fiction, true crime is also booming. Why?

I think lots of things are happening. We have a thirst for truth in the 21st century, with politicians telling so many lies, with the media so untrustworthy, how do you know what the truth is anymore? Crime fiction fulfills a very human yearning for the truth and is one of the few forms of fiction where at the end of the book, every ‘i’ is dotted, every ‘t’ is crossed and you know the truth. True crime does the same thing. We take mysteries in this world and want to unravel them. There are other reasons too. If a horrible murder is committed… there is a prurience. Murder opens doors into people’s lives, nothing is hidden. The man or woman who looks respectable has dark secrets. We all have dark secrets and an interest in knowing what those secrets are.

You are so prolific. Writers often complain that writing is hard.

I never use the word ‘hard’. If it’s hard, something has gone wrong. I was born to be a writer. It’s the only thing that I’ve enjoyed in my life and makes me happy. Sometimes you come to challenges or something doesn’t work, but the actual writing itself is like a river. There are rapids and rocks and fish with teeth, yes it’s difficult to stay alive, but you go with the flow. You can’t stop and say, ‘Should I stop, should I get out?’ You just swim.

What were the challenges in writing new stories for beloved, well-known characters like Holmes and Bond?

The first challenge is not to write anything the fans will be angered or upset by. For example, Bond smokes, if I said he was vaping, they would be angry. Knowing the rules is important. The style is instinctive. Fleming is a magnificent writer. He had a style which is difficult to explain or capture, a sort of tiredness with the world. He writes atmosphere and landscape brilliantly but he’s also a superb master of action. To try and write as well as Fleming is insanely challenging, because it’s impossible.

The Doyle books are well-written too but more distant. Because they were written at the end of the 19th century, they are easier in a way to capture. There are very few writers who write atmosphere as well as him. Half the work is done for me because if you’re given Holmes and Watson you already have two of the greatest characters and the greatest friendship in fiction. If I’m writing Bond or Holmes, I’ve already been given a gift, these characters, this world. For the rest of it I have to really raise my game to be as good as what I’ve been given.

How do you write characters set in the past while being conscious of contemporary values?

That is the problem. The way Fleming saw women was different from how we see women now. For example, Pussy Galore is a wonderful invention but if in a modern novel I created a character of a woman who was raped by her uncle at 15 and had been a lesbian all her life and then transforms into a heterosexual the day she meets Bond and then I called her Pussy Galore, that would be the end of my career. It’s good we have changed, of course, I support that. But to be true to Fleming without being offensive is my first goal. That said, Fleming did have a healthy respect for women.

In The Word Is Murder the Horowitz character wonders how to portray a homophobic, problematic figure like Hawthorne. Is that a concern when you write?

The modern writer has to tread carefully. That’s a shame. Writers should be creating trends, not following them. Society has moved very quickly and in certain matters a writer is foolish to court controversy, particularly in Britain, where people are fast to get angry.

It’s making me more cautious. I don’t disagree with political correctness. To make jokes about a person’s gender, colour, sexuality, that’s good we don’t do it, but that said, are we moving into an era where to create a character like Hawthorne, who has some objectionable views, is not permitted simply because to express those views, even if you question them, is not allowed? That’s a step too far.

Crime fiction fulfils a very human yearning for the truth and is one of the few forms of fiction where at the end of the book, every ‘i’ is dotted, every ‘t’ is crossed and you know the truth

But readers can differentiate the authorial voice from the views of a character.

Readers must be allowed to continue to do so. The danger is that it’ll become so restrictive that writers will no longer have the freedom even to debate ideas people no longer agree with. I can give you a tiny example. My American editors asked me to take out the word ‘crazy’ [from an Alex Rider book], in ‘that’s a crazy idea’. They said its pejorative to people with mental health issues. That to me is worrying, because language is flexible. We know that to call somebody who has mental illness issues ‘crazy’ is pejorative and one doesn’t say it, but to say ‘that’s a crazy idea’ has a different meaning. One mustn’t get into a state where everything is black and white, one mustn’t forget the shades of grey.

Would you write a character of a different identity? I’m referring to the debate Lionel Shriver sparked off about writers and cultural appropriation.

I’ll just say this: in an ideal world, writers should write what they want to write, they should not be afraid of offending anybody or be kowtowed by modern sensibilities. In the world in which we live where social media is so strong and the dangers are so great for freedom of expression, the freedom to be offensive, to be contrary, these are important, but I have a feeling they’ve already been lost.