The Meek Must Protect the Earth

Four novels answer the question of justice and law 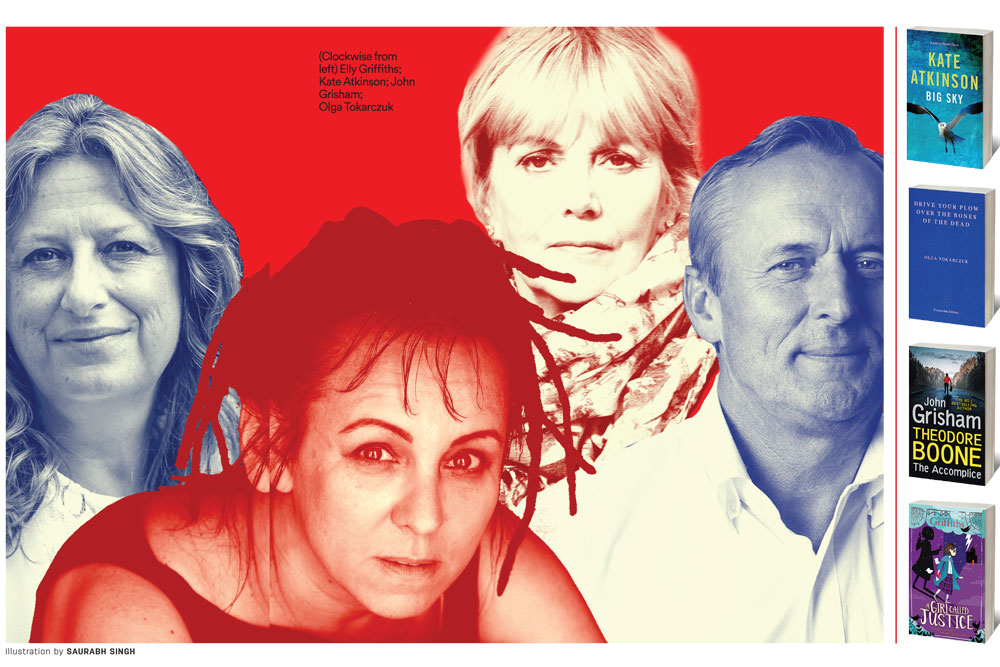 
WHAT DOES JUSTICE have to do with the law? Everything, you may say, but what if we think of law as a set of rules of conduct backed by state-enforced penalties for their transgression? Then justice need not have anything to do with it. You can have laws that are considered unjust by many—think of the Nazi sterilisation law of 1933 that subjected many to involuntary sterilisation in the name of racial hygiene. Justice is a judgement of value which each of us holds about rendering to each person what he or she deserves. Conceived substantively, justice speaks to the ‘correctness’ of the outcome of individual cases. In the books reviewed here, the characters have different answers to the question of justice and law. But for all, rest assured, it is only a matter of time before justice catches the perp.

BIG SKY (Random House UK; 368 pages; Rs 599), Kate Atkinson’s fifth instalment of the Jackson Brodie series, opens with two pretty sisters from Poland being interviewed via Skype by an Anderson Price Associates representative. They are offered positions in top hotels in London. Atkinson tells us: ‘They weren’t stupid, they knew about trafficking…but APA wasn’t like that. They had a professional website…all kinds of testimonials.’ They accept. The representative turns the screen off. Yes, you guessed right. Fake office, fake jobs. Only his Rolex was real. Right, the main plot is about human trafficking and other awful sexual abuses.

Enter Jackson Brodie, ex-military, ex-Cambridge Constabulary who has lost the fortune he got from a client and is now a private investigator in a seedy seaside village in North Yorkshire. While working on a routine case of shadowing a philandering husband, Jackson spots a girl carrying a backpack with the picture of a unicorn hitching a ride. The car drives away before he can warn her about the dangers of hitchhiking. He yells at his surly teenaged son to take a picture but the number plate is blurred. The next day Brodie finds a backpack washed up on the beach and immediately goes to the police to find out if any girls similar to the one he had seen had been reported missing. If you have a bad feeling about this one, hang on to it.

Atkinson meanwhile has had us hop into the head of another character, Vincent Ives, a telecom equipment area manager going through a divorce, who is on the green at the Belvedere Golf Club with his ‘golf-friends’, Tommy the rich owner of a haulage company and Andy, a travel agent who runs a failing hotel with his formidable wife Rhoda. This trio, a canny reader thinks, will have links to the main plot, as will Tommy’s trophy wife (Crystal), his teenage son (Harry) and two young police detectives who are tying up the loose ends of an old case, you guessed right, human trafficking. Harry has a summer job at the local variety theatre, which puts up a third rate show with an ageing comedian (also interviewed by the young detectives with regard to the old case), and a cross-dresser who becomes friends with Harry.

We are off on a rollercoaster ride through the riveting emotional landscapes of these characters who view human trafficking from different and conflicting positions. All through, Brodie forms the common link. One of the detectives is from his past; she rescued him from drowning. Jackson rescues Vince from making a mistake. Crystal thinks someone is following her, and she hires Jackson to investigate but he doesn’t do a good job. He does, however, find a link with Crystal’s past. Old secrets emerge.

Atkinson is a master at playing with the story arcs of her characters, each of whom is at a particular point in their individual life story. She makes some arcs intersect at the beginning of their stories, others converge in the middle, and for all, the arcs collide at the end and the story is resolved. Old secrets and hurts emerge and clichés involving the passiveness of the powerless are upended. Atkinson gives these characters the ability to strike back, which emerges from their strong sense of what constitutes justice.

Funnily enough, Jackson Brodie is less interesting than the other characters. By page 11 we learn that Jackson and the mother of his son are toe-to-toe in the grief stakes. By age 13, Jackson’s mum was dead of cancer, his sister had been murdered and his brother had killed himself, helpfully leaving his body for Jackson to find. Phew! Julie, the actress-mother of his son who edges forward in the trauma stakes: ‘Oh and don’t forget Daddy’s sexual abuse,’ she reminds him. ‘Trumps to me, I think.’ Atkinson’s dark humour and mockery at the detective genre’s trope of piling on tragedies in the protagonist’s life shines here. Her insouciance at using coincidences (Jackson sees a hitchhiker get into a predator’s car) to power the narrative is part of the send-up.

By the end, we realise that for some if not all the characters, law has little connection with justice.

HOW CAN YOU resist a voice that begins: ‘I am already at an age and additionally in a state where I must always wash my feet thoroughly before bed, in the event of having to be removed by an ambulance in the Night’? Janina is an ageing but supremely quirky caretaker in remote southwest Poland straddling the Czech border. She spends her days studying astrology, translating William Blake, and looks after the summer homes of the rich Warsaw lot during the bleak winters. The title is drawn from Blake’s Proverbs of Hell in The Marriage of Heaven and Hell. A snippet from Blake’s book captures Janina’s spirit.

‘Once meek, and in a perilous path
The just man kept his course along
The vale of death.’

Janina has lost her two dogs, ‘my daughters’, she calls them and is prone to Ailments (‘for months my eyes had never ceased to water; my tears would flow for no reason, out of the blue’). She is passionate about animals—foxes, wolves, deer—in the surrounding forests. She abhors hunting in a community where the mayor, other notables and even the priest are hunters. Not surprisingly, she is treated as the village eccentric, to be humoured but not taken seriously. Then comes the vale of death. Bodies are found in strange circumstances, starting with her neighbour whom she calls Big Foot. Nobody believes Janina’s theory about a common link between the murders. To help her prove the whodunit she commandeers an unruly, free spirited and eccentric band of friends with monikers such as Oddball, Dizzy and Good News.

Janina’s idiosyncratic yet deeply honourable regard for nature lingers in the mind long after. The more you chew on the ideas sparked by the book, the more satisfying the taste. Not dissimilar to a character in an earlier Jackson Brodie novel who is incensed by the heedless cruelty of man towards fox cubs. It is up to the meek to protect the earth, for them as just men and women to rage in the wilds (Blake). I will leave you to discover Janina’s answer to the question: What does law have to do with justice?

Drive your Plow over the Bones of the Dead (Translated by Antonia Lloyd-Jones; Fitzcarraldo Editions; 272 pages; Rs 1,757) is a brilliant and deeply reflective ecological thriller/literary novel by Olga Tokarczuk, the winner of the 2018 Booker prize.

IN JOHN GRISHAM’S The Accomplice (Hodder; 240 pages; Rs 299) you’d think that a 13-year-old boy who can’t wait for the years of school and law school to pass before he can become a lawyer wouldn’t have much in common with free-spirited Janina or gloomy Jackson Brodie. But no. They all seek justice for the meek. For Theodore Boone, a child of two successful lawyers, law and justice are synonymous. He lives and breathes law. He haunts the local courts, knows the local policemen, argues cases in Animal Court where his clients are dogs and rabbits accused of shattering the peace. In short, Theodore lives an idyllic Enid Blytonish life.

His friend Woody is not so lucky. Woody’s mother is struggling to put the pizza on the table, a dad and a step dad who have checked out of their lives, and a 16-year-old brother who is already on probation. The brother’s friend embroils them in a robbery with a water pistol, which under the law is armed robbery. Theodore has to get Woody out by using his wits and his knowledge of the law. Written for children, its simple language sometimes veers into talking down rather than talking to. Nevertheless, it is a charming read.

A GIRL CALLED JUSTICE by Elly Griffiths (Quercus; 320 pages; Rs 499) is a more solid Enid Blyton’s Malory Towers meets country house murder and Harry Potter. Justice Jones, the daughter of a famous barrister, homeschooled till now by her mother, begins her first term in Highbury House Boarding School for the Daughters of Gentlefolk.

‘As soon as she saw the school, Justice Jones knew that it had the potential for murder.’ This is in the 1930s, an era of Morse codes and ‘broadsword calling danny boy’ radio communications. Her taxi driver tells her that a chambermaid Mary, has died very suddenly. He hints at foul play. Justice, who fancies herself as a sleuth and has devoured the mysteries written by her late mother, gets down to finding out the truth about Mary’s death. Justice receives an anonymous note asking her to come at midnight to the tower (supposedly haunted). A second murder occurs when the school is snowed in.

While tracking down the killer without becoming a casualty herself, Justice has to navigate the usual shoals of boarding school life—finding friends, dealing with snippy peers, a brusque Matron, the hearty games teacher and the mysterious and capable headmistress, and of course, the soggy grey potato-ish lunches and dinners. Add suitably icy surroundings and Morse Code and we are in a scrumptiously eerie boarding school world of midnight feasts, tuck boxes and a juicy mystery.

Griffiths, who writes the popular Ruth Galloway series for adults, shows a knack for writing for children too by treating them as peers. While Grisham’s Theodore is still childish, Justice is more self aware, matter of fact and intelligent in the way she solves the mystery. I am looking forward to the next installment.