Masih Alinejad: ‘What made me different was that I took action’ 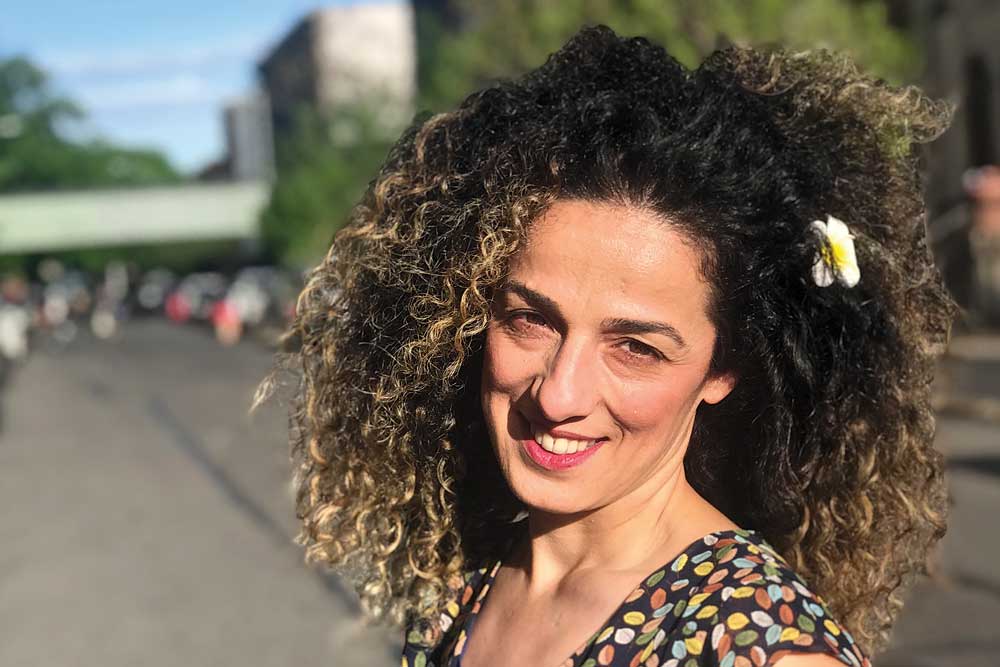 HER CRIME WAS dance. Eighteen-year-old Maedeh Hojabri was an Instagram celebrity with videos of her swaying and shimmying, pirouetting and pouting to Iranian and Western pop music, including Shakira and Justin Bieber. Her oomph quickly attracted thousands of likes and shares on social media. But then she was arrested by Iranian authorities. In July, a state-run TV programme showed her weeping and stating, in what was a “forced confession”, that the videos weren’t to attract attention, but for her followers—“I did not have any intention to encourage others doing the same.” She was released on bail later.

In the early 90s, Iranian journalist and activist Masih Alinejad was arrested for being part of a political group in her high school. She was kept in a dank cell for days and forced to write her confessions over and over— who were her friends, how did the group come together, did she ever think about killing a leader. News of Hojabri’s arrest surfaced just weeks after Alinejad’s memoir The Wind in My Hair: My Fight for Freedom in Modern Iran (Little, Brown and Company; 400 pages; Rs1,932) was published, proving that when it came to women’s freedom, little had changed in Iran in over two decades.

“I was 19 when I gave that false confession in Iran. I saw Maedeh’s clip, and it took me back to that dark time when I was scared and miserable. The government and the situation of oppressing people, forcing them to give false confessions hasn’t changed. But what has changed is us,” says Alinejad, over a Skype conversation from her home in Brooklyn, New York. Shortly after Maedeh’s arrest, Alinejad started a hashtag on Instagram, urging women to dance in her support. Soon, dozens of Iranian women were flooding social media with their dance videos, some within their homes, others in public parks and on the streets. The women’s rebellion embodied a key feature of Alinejad’s own journey, political and personal—the power of saying no.

Alinejad grew up in Ghomikola, a tiny village of 100 or so families in northern Iran. She was the youngest of six children, and also the most distinct looking—slight and dark-featured, her hair “coils of thick snarling curls”. In 1979, when she was just a toddler, the Islamic Revolution erupted, overthrowing years of rule by Persian kings. This spelled doom for women’s rights—compulsory hijab became the law, the value of a woman’s testimony became half of a man’s, and beaches, cinemas and other public spaces were segregated. Alinejad’s father—Aghjan—enlisted in the Basij, a paramilitary group created to protect the regime.

In the new regime, girls were expected to stay indoors and out of sight. While her brother Ali played for hours in the summer sun, she was told “girls can’t do that”. The women in the family had to wear head scarves at all times, even while asleep. But Alinejad was “never the obedient child”. At a school event where she was chosen to recite the Quran, she began by intoning a holy verse before switching to a love poem by the influential Iranian poet Ahmad Shamlou. She challenged the religious teachers in school with questions on god’s existence and abandoned the chador, much to her father’s chagrin.

“We’re just taking our voice back, our body back and our visibility back. And eventually, our country back” – Masih Alinejad

“As a kid, I never had a clue about feminist movements, equality, or even discriminatory laws. I was exactly the same as other girls, wondering why boys could go out and play freely, while we couldn’t. Why Ali could jump into the river and I couldn’t,” she says. “What made me different was I took action.” One afternoon, she recalls, when Ali sneaked out of the house to go to the river, she woke up her mother to tell her that he was missing. “I ruined his freedom, to make him understand that if he wanted to enjoy it, he had to help me get out of the house.”

She started a revolution from the family kitchen—which was designed for women given their height—by placing a chair for Ali so he could sit and work. “My mother worked as hard as my father in the farm, and I worked as hard as Ali. Women joined the war during the revolution and are equal to men in every aspect, except when it comes to human rights. According to Sharia laws, they’re not allowed to get a job without getting permission from their fathers, can’t go to university and can’t travel abroad unless a male member of the family approves. Even the divorce and marriage laws benefit men.”

ALINEJAD’S MOTHER NEVER had a chance to go to school, but she was hard-working, sage and clear-sighted. When her daughter was expelled from high school, she asked an official of the Board of Education to reconsider their decision by offering an analogy of a tree hit by blight. The tree needed love, just like Masih, whose faith was weak, needed nurturing instead of abandonment. In another incident the family had gone to visit Ali, who was in jail for his involvement in the same political group as his sister. There, they learned that Ali had lost his visiting privileges because of his refusal to join the Friday prayers. His mother proceeded to throw all the food and tea they had brought for Ali on to the ground, in front of the official to prove how he was breaking a mother’s heart. When he finally relented, she refused the “charity”, saying she didn’t want to beg for what was her right.

Even today my goal is just to share my pain—as a girl from a village who didn’t have a chance to be heard or seen. I now give a platform to other women who haven’t had the chance to be seen or heard” – – Masih Alinejad

Alinejad notes that her penchant for writing and public advocacy is a gift from her mother. “My mom is an example of so many mothers in Iran. She helped my father in the farm but when that wasn’t enough, she taught herself how to sew and started her own business. She found her agency through her needs, her pain, rather than victimising herself. I used her as an example in the book to show women that you don’t need to get an education in a high-profile university or be a well-known feminist to fight for your rights,” she says. “When you see yourself as powerful, you can raise powerful children like me.”

After she moved to Tehran with her husband Reza, Alinejad worked at a state-owned radio and TV station, getting people to fill questionnaires on the programming. After a few years, Reza fell for another woman and with the divorce, she lost custody of her four-year-old son. Not one to curse her fate, she became fiercely independent, refusing to move back to her parents’ house and realised her writing dream, by joining a daily newspaper—affiliated with reformist political parties— as a journalist. Her first story made it to the front page and she soon became a Majlis (parliament) correspondent. As she openly criticised the president’s politics, it became dangerous for her to stay in Tehran and she fled to London.

“I had tried everything, to be loud, to ask questions, but it didn’t work. As a young student who got involved in political activities and went to jail, it was really hard. I had these scars and wounds and was looking for a platform to talk about it. That’s why I decided to be a journalist. Even today my goal is just that, to share my pain—as a girl from a village who didn’t have a chance to be heard or seen. I now give a platform to other women who haven’t had the chance to be seen or heard,” she says.

For the 41-year-old, compulsory hijab is the most visible tool of women’s oppression. In 2014 she posted a photo of herself running through London’s cherry blossom- lined streets, her hair wild and free, on her Facebook page. The photo went viral, and My Stealthy Freedom was born, as women across the world began posting pictures of themselves without the hijab, among them many Iranians, risking arrest. “We’re not talking about a small piece of cloth. Compulsory hijab helps to censor women, to keep them silent and invisible. People were already unhappy about hijab laws and I used social media to mobilise them,” she says, citing Maedeh’s example.

For 41-year-old Alinejad, compulsory hijab is the most visible tool of women’s oppression. In 2014 she posted a photo of herself running through London’s cherry blossom-lined streets, her hair wild and free

“I was bombarded with videos of women dancing. Social media does not only break censorship, but empowers people against hostage takers. For four decades, the Islamic Republic of Iran took us, our bodies hostage, not allowing us to talk. We’re just taking our voice back, our body back and our visibility back. And eventually, our country back.”

From the days when she grew up watching hard-line clerics on the black-and-white TV in her village, Alinejad is now on the other side. “They call me a prostitute, a CIA agent, an MI6 agent but I’m the one who’s talking, and they’re listening. Through my campaigns, millions of women are finding their agency,” she says. She recently posted a video of a woman fighting the morality police in Iran, telling them what she wears was none of their business. The video has over six million views. “Even the Supreme Leader of Iran doesn’t get those views,” she says, chuckling.

Today, Alinejad has taken the stage at Tina Brown’s Women in the World Summit, met Sheryl Sandberg—the Facebook COO who urged her to write her memoir—and continues to fight against the ruinous politics of the Islamic Republic. In March this year, she received a death threat from a prominent Basij for fighting compulsory hijab. She tried to file a complaint with the Iranian interest section at the Pakistani embassy in Washington, but couldn’t because she refused to wear the hijab.

“I grew up hearing that my body and personal freedom is not important. In the West I faced another argument, about Islamophobia. Many Western feminists, who’ve never experienced discriminatory laws, believe there are problems bigger than the hijab issue. Whether in Iran, India or Middle East, I want women to read my story and understand the power of saying no and be their own saviours, rather than waiting for someone to rescue them. I want them to start the revolution from their own homes and then challenge the whole system.”

She now lives in exile in New York with her husband, Iranian-American journalist Kambiz Foroohar. She calls him her true partner, in life and campaigning. “I am full of energy, always jumping around while he is cool and calm. In the past four years, there have been moments when I thought I can’t take the personal attacks, vilifications and threats anymore. But Kambiz pushes me to be stronger. He says, ‘This is not about you anymore. You have given hope to millions of women. They are ready to fight for their rights but they need you to be just as strong.’”