In a Sacred Grove

In praise of eco-friendly Hinduism 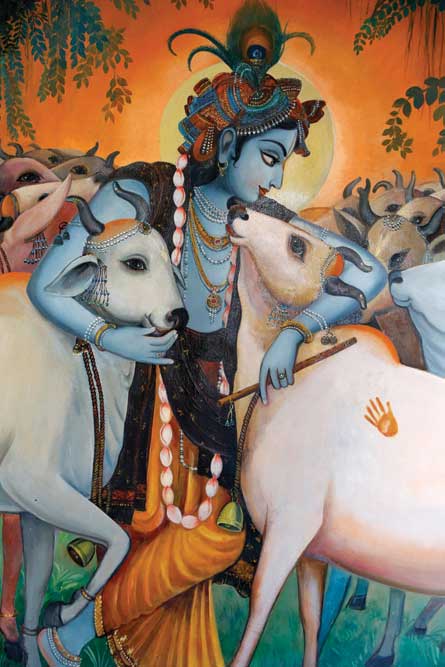 ‘HINDUISM HAS A cosmic, rather than anthropocentric, view of the world,’ explains Nanditha Krishna in this concise but comprehensive study of Hinduism and the environment. Hinduism’s reverence for nature is not just built into its scriptures, but is encoded, as it were, in its DNA—its understanding of the cosmos and its devotion to the welfare not just of human beings but of all creation: plant, animal, or other.

Krishna, a historian and ecologist who heads Chennai’s respected CPR Environmental Education Centre, covers the lot—groves and gardens, waters, plants, animals, nature itself—with reverence that befits a subject sanctified, for her, by divinity. She is a devoted Hindu and a passionate animal rights activist: ‘The Divine is all and all life is to be treated with respect,’ she affirms, buttressing her environmentalism with extensive quotations from and references to the Vedas.

The result is a detailed and thorough book which will provide plenty of material to anyone interested in textual evidence of Hinduism’s respect for nature. Hindus are expected to see the world around us as something of which we are an interdependent part; we are embedded in, indeed part of, nature and individual humans are microcosms of the universe. The five elements—space, air, fire, water and earth—are the foundation of an interconnected web of life. The essence of the earth, the air we breathe, the water we drink, is no different from the tree we chop down, the cow we milk, or the mother we love: all are different manifestations of the same divine spirit or atman into which all will ultimately merge. The Hindu (and Buddhist and Jain) idea of ahimsa or non-violence applies to all forms of human, animal and plant life; violence against any of these harms the same divine essence of which we ourselves are a part.

Hinduism is therefore arguably more profoundly concerned with the relationship between humans and the environment than any other faith. The scriptures urge people to use the world unselfishly and with respect for the rest of creation. Environmental movements like the Chipko Andolan, in which hill-dwelling women hugged trees to prevent them being razed by timber contractors, and cultural practices like vegetarianism reflect a deep-seated respect for life and for the environment that is inbred in most Hindus.

Only Hinduism could have created such a strong belief in cow-worship and opposition to cow slaughter. Only Hindus could worship nature—many Hindus see the Ganga as a goddess, for instance—and see the presence of God in the environment. The Hindu respect for frugality and asceticism, the instinct to recycle and re-use rather than discard, are all born of consciousness that nature should be treated with care.

As Dr Krishna’s extensive quotations testify, Hinduism contains numerous references to the worship of the divine in nature in its scriptures, in particular the Vedas, which reflect a strong practice of nature-worship, but also in the Upanishads, Puranas, and other sacred texts. Many Hindus recite mantras that reflect praise for and concern about the well- being of rivers, mountains, trees, and even animals. Dr Krishna argues that the Hindu belief in dharma includes the responsibility to care for nature, and that our treatment of nature affects our karma in the life beyond.

Hindu traditions envision the earth as a goddess, Devi, a mother deserving of our respect and gratitude daily for her sustenance of us. Many Hindus are brought up to touch the floor before getting out of bed every morning, to beg the goddess’ forgiveness for walking upon her. Dr Krishna begins her book with the image of the Hindu housewife cleaning the space outside her doorway to create a kolam, a beautiful design made of rice flour—both as an offering to Devi and as an aesthetically pleasing work of art, but also as a practical way of keeping ants out of her home by feeding them outside.

All this is beyond cavil. But if there is a criticism that can be expressed, it is that in her own reverence for Hinduism and for nature, Nanditha Krishna is insufficiently critical. Her account works better in theory than as a depiction of the reality we live in—our squalid streets with their overflowing mounds of garbage, the ubiquitous plastic litter that is a permanent stain on the environment, the sludge and toxic waste that blights our dying rivers, including the divine Ganga, the contrast between spotless Hindu homes and our indifference to dirty public spaces, and the rampant exploitation of the environment, of women and Adivasis (the very indigenous peoples whose right to live amongst nature we trample upon in our urge to achieve ‘development’). When she talks about the ‘proven antimicrobial properties’ of Ganga water, one does not know whether to laugh or to cry: the sacred Ganga is a toxic sewer, bathing in which (downriver) is likely to leave you in need of a scrub.

However, as an environmentalist and environmental educator, she has spent the last 30 years fighting environmental issues in Tamil Nadu, training teachers and educating children about the environment, besides restoring 53 sacred groves. At least she has practised what she preaches.

Nonetheless, this is an important and useful addition to the volumes we have about Hinduism, since it treats a subject that many have for too long taken for granted, and does so with impressive mastery. Thoroughly researched and extensively documented, Hinduism and Nature provides more than enough material for scholars of religion to cite in defence of Hinduism as for environmentalists to base their justified condemnations of the actual behaviour of today’s Hindus.

‘Faith groups can play an important role in the effort to protect nature and the environment,’ writes Dr Krishna. ‘Hinduism, with its ancient tradition of respecting nature, should re-invoke its rich heritage to ensure that people, animals and all of nature live together in harmony, and recreate the beautiful environment of ancient India.’ It’s a tall order. But this book offers a good place to start.