Haunted By the Nation

In Sugata Bose, the personal and the historical mix ineluctably even if the picture produced is too optimistic to be real 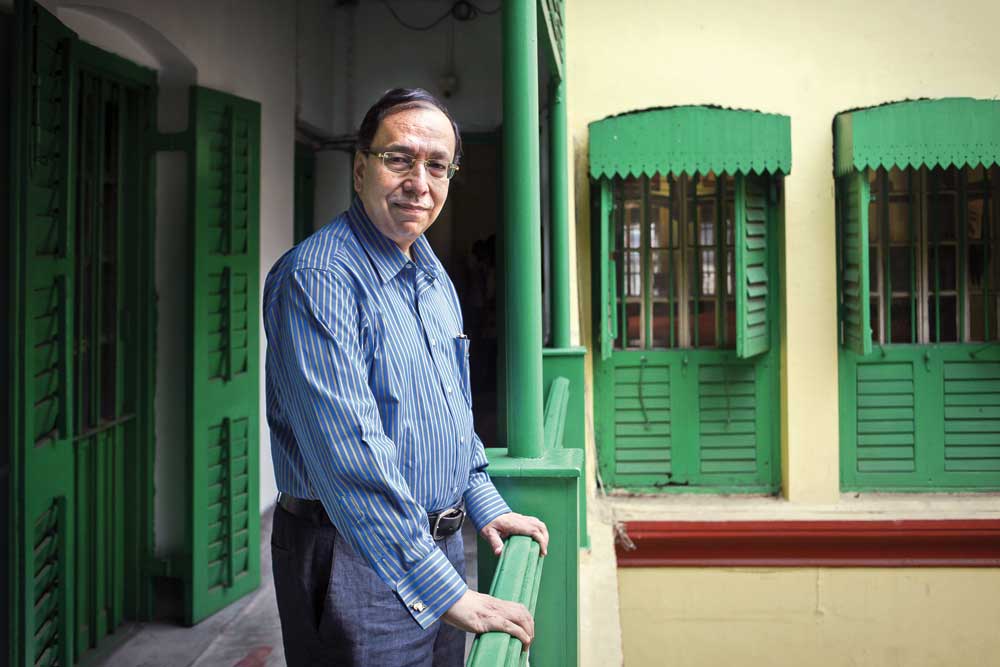 IN THE SIX months before Independence, Mahatma Gandhi spent the better part of his time dousing flames of sectarian violence across India—from Delhi to Noakhali in Bengal. When August 15th came, he had little to celebrate. In violence-marred Calcutta, he used the only weapon he had—a fast—to calm things down. This bit of India’s history is well- known, captured in books and films alike. Less known are Gandhi’s attempts to keep India united in these months when by each passing day it was becoming clear that holding India together—as it had been known since the 19th century when the British unified the Subcontinent under their Raj—was impossible. In this, he was let down by his erstwhile lieutenants, Jawaharlal Nehru and Vallabhbhai Patel. This revisionist history is, again, known. If it were only this, then The Nation as Mother: And Other Visions of Nationhood (Viking; Rs 499; 272 pages) would be just another book. But in the hands of its author Sugata Bose, Gardiner Professor of Oceanic History and Affairs at Harvard University, it is much more. Part history, part reflection and partly a record of his contemporary career as a member of the Lok Sabha, it is an attempt to blend many things. The writing is seamless even if the ideas it addresses form the core of disputations in modern Indian history.

Bose picks up the threads from the middle of 1947 when it became abundantly clear that Bengal and Punjab would be partitioned for the creation of a strong centralised India in contrast with a loose federation of states where the centre would be at the mercy of constituent units. The idea did not wash with Nehru and Patel, even if influential Bengalis—for example Bose’s grandfather Sarat Bose, the brother of Netaji Subhas Bose—wanted a united Bengal. It was a choice between an India run from a weak centre—but with its unity intact—and a strong, centralised India minus the parts hived off to Pakistan. Much like his grandfather, this has affected Bose as well. Seventy years later, it has shaped his views on subjects as diverse as freedom of expression, Kashmir and the nature of federalism in India. While others may see these as different matters, the historian in Bose considers them linked.

“I strongly believe that a free and flexible federal Union of India will in the long-term be a stronger Union. There are limits to artificially imposing authority from above or a centre,” he says in response to a question about bringing far-flung and fractious states together. It is an outlook that is not fashionable in contemporary India. In contrast to the ideas of modern India’s founders, Nehru and Patel, Bose harks back to the idea of layered and shared sovereignty whereby local autonomy and larger—national—sovereignty can exist at the same time.

“If we look at the history of both political thought and political practice in India,” he says, “there is no doubt that in pre-colonial India and also in our anti-colonial political thought, most of the sophisticated thinkers had advanced concepts of layered and shared sovereignty.” Bose says that one of the major themes in his book is the federal idea that was enunciated with great skill “by most of our leaders in the early part of the 20th century”. “Even in economic matters they were talking about fiscal federalism.”

This is an idea that goes back to the heart of debates about Indian identity and sheds much light on current political divisions. Is India a civilisation or a nation- state? Can a civilisation turn itself into a nation-state? At one level, these are fashionable questions that have motivated a lot of output in the Western academy. In India, the questions are prosaic: What to do about the long-running insurgency in Kashmir? How to bring closer the distant states of the Northeast that are so remote from, to use an indelicate expression, mainstream India? The historian in Bose, moved by his study of pre-colonial and colonial India, informs the politician in him: the way forward is not to impose central power but to “bring in” more people into a better union.

Citing Rabindranath Tagore, he says, “[Tagore] had a very telling sentence in his Bengali essay Bharatvarsha: ‘where there is genuine difference it is only by recognising and respecting that difference and then restraining it in its proper place that it is possible to achieve unity.’ You cannot achieve unity by issuing fiats that everybody is one.” What he fears, Bose says, is that “if there are fiats that are issued from the top that we are one, that may be an attempt to impose uniformity”: “That is not the organic unity that we should all be aspiring for.”

It is an interesting thought. When, as a counter, he is asked whether ‘recognising the differences’ has gone far ahead of ‘restraining them’, Bose offers a careful answer, one that gently elides what is being hinted at: “You are emphasising fissure, I am stressing fusion. I am suggesting that it is through a respectful attitude to differences that we can fuse together our different peoples…We should encourage all of our different peoples to contribute to a new discourse on the Indian nation. If we invite them in, we will have a better chance to forge a longer-lasting unity.”

These obvious difficulties notwithstanding, the professor has a large store of optimism: Where did we learn the concept of unitary or monolithic sovereignty? From the British. If the British can change their mind and overcome conceptual barriers—with regard to shared sovereignty about Northern Ireland— why can’t we do that? The answer sounds pleasing even if there are plenty of doubts about the applicability of a solution from the British Isles to the much more difficult plane of Indian realities.

“Now there is a kind of a defensive reaction, whether in Trump’s America or in Modi’s India, and there is an appearance of a reassertion of nationalism. But I think the idea of layered and shared sovereignty, and variants of federalism have become more salient today than before,” he says.

In these polarising times when the walls between academic reflection and personal opinion have been demolished for all practical purposes, Bose is a rare exception in sticking to his guns without reducing an argument to crass politics. In the introduction to The Nation as Mother, he writes, ‘Belonging to a generation bred in Nehruvian secular tradition, it seemed especially important to me not to continue making the mistake of regarding religion as the enemy of the nation.’

Now that seems puzzling. After all, the contemporary distempers affecting India (and Indians) have a lot to do with religion and the nation, with some saying the gap between the two bodes ill for India’s future and others claiming that a tighter fit will lead to disaster.

In response to a question on whether Nehru’s heirs and followers made an error in taking religion as an enemy of the nation, the Harvard professor is felicity itself. “Yes. Secularism as a system of values [was] replaced [by] secularism as an ideology of state to buttress centralised administration. And certainly by the 1980s, secularism as well as socialism began to lose their sheen,” he says. But even before the last word is done, he is quick to add “and religious majoritarianism was already resorted to as a replacement, to, you know, defend the centralised state from a variety of regional challenges. All that the BJP and its allies have done is to have a more organisationally cohesive and ideologically committed formation than the Congress, which was already doing more or less the same thing.” It is tempting to call this an example of how to hold on to one’s view, give something in turn, and carry on with the debate—a quality all too rare in current debates on issues as complex as the role of religion in a nation’s life. A better explanation would be that as a keen historian, Bose knows—all too well—the integral role that religion plays in the lives of people in a conservative country.

These qualities of gentle argumentation come across clearly in The Nation as Mother. When viewed in isolation, the essays and speeches appear to have been plucked from their original contexts—as lectures or as contributions to periodicals. But seen in the context of Bose’s commitments as a historian of India, and now as a parliamentarian, the book’s transition from history to topical events is smooth. It is obvious that he is a liberal at heart, whether it is due to a close observation of past events or other influences. But unlike the latter class of intellectuals, he does not run down the role of religion and other traditional motivations in the life of India. In that both the book and the writer make for pleasant engagement.