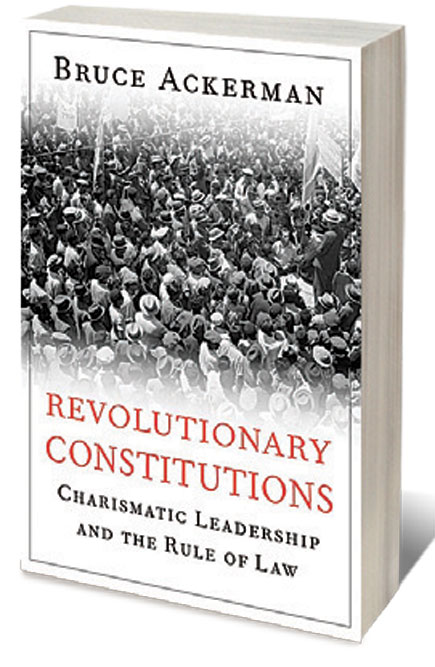 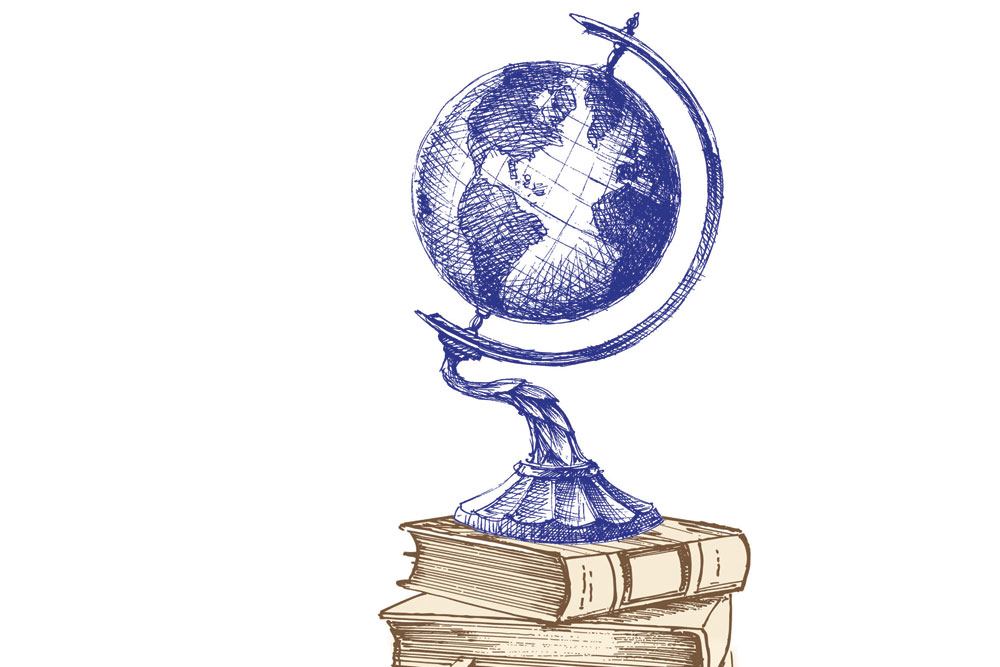 
BRUCE ACKERMAN, A professor at Yale Law School, is an academic and lawyer of substantial repute. The books he has written have invariably been well received. In We the People (2018), a grand three-volume work, he chronicled the development of American constitutional law with élan. In it, he propounded a theory of dualism, by distinguishing ordinary laws from the Constitution; the latter, he wrote, was a product of a higher power founded and established by the sovereign authority of the people. But as memorable as We the People was, the first part of Ackerman’s latest three-volume work, Revolutionary Constitutions: Charismatic Leadership and the Rule of Law (Harvard University Press; 472 pages; Rs 3,266), is deeply disappointing. So much so that in reading the book it’s difficult not to wonder why it was at all written. Not only is its primary hypothesis unclear, its effort at expounding a comparative perspective between different constitutions is perforated by claims ultimately demonstrated neither by evidence nor argument.

In Ackerman’s belief, a greater understanding of the past will help us better confront the constitutional crises erupting throughout the world. But how precisely is knowledge, say, of India’s history in overcoming colonial rule going to help Britain overcome its Brexit woes? Ackerman doesn’t quite give us an answer. No doubt, he admits, that reducing the complexities of global experience into a singular and ‘compelling comparative framework’ may be fraught with trouble. But he nonetheless asserts that such an exercise is essential for us to understand the different conduits to constitutionalism that countries may have taken, and this, he believes, might ensure that people aren’t tempted into thinking that every constitutional crisis is a symptom of the same disease—‘so-called populism’—and that therefore they can be ‘cured in similar ways’.

Now, for one, I am not entirely sure that people actually believe that every constitutional crisis stems from the same cause. But even if one were to concede that such a belief exists, it’s perplexing that Ackerman would add that the aim of his project is not to suggest measures for reform but to merely diagnose the different predicaments confronting countries. Such a diagnosis, he writes, will enable citizens and politicians to understand the challenges before them better, while, at the time, sustaining their ‘distinctive traditions into the twenty-first century’. But if this were the objective, what, one might ask, is the necessity for a comparative exercise? Shouldn’t countries look to their own histories to grapple with their respective problems? To this, Ackerman says a comparison of the kind that he makes will allow national politicians ‘transfixed by the seemingly unique features of their domestic crises’ to challenge common dilemmas that their country might share with others which might have escaped their attention. As is manifest, the thesis now runs athwart the book’s initial claim: that there is an attraction in believing that constitutional crises around the world are symptoms of the same disease.


How precisely is knowledge, say, of India’s history in overcoming colonial rule going to help Britain overcome its Brexit woes? Ackerman doesn’t quite give us an answer

The basic thesis apart, Ackerman says there are three different yet definite pathways through which constitutions around the world have secured legitimacy. In the first category are countries in which revolutionary outsiders have helped oust repressive establishment insiders through constitutional order. In this, Ackerman includes countries as diverse as India, South Africa, France, Italy, Poland, Israel and Iran. In the second pathway, establishment insiders use the constitution to make strategic concessions to revolutionary movements before they themselves can gain power. Britain, for Ackerman, provides the paradigmatic example. In the third scenario—Spain, Germany and Japan are included here—even as government begins to unravel, ordinary citizens remain passive allowing the political elite to create a new constitution.

In this, the first volume of the three-part effort, Ackerman deals only with revolutionary constitutions. Despite the manifest differences between the countries grouped together, Ackerman says the constitutions of these nations ‘are rooted in a common experience’. This experience, he argues, can be seen through a ‘four-stage dynamic’: Time One, where revolutionary outsiders assert political authority through sustained dissent, not by relying merely on brute force but by groundbreaking declarations of principle; Time Two, where, in Ackerman’s words, revolutionary charisma is constitutionalised through the careful drafting and establishment of a new constitution; Time Three, which is marked by a series of succession crises, during which new political leaders emerge within the constitutional framework; and Time Four, where constitutionalism is consolidated through acts of judicial supremacy.

I may not be qualified enough to consider whether these four stages are equally prevalent in the nine countries that Ackerman discusses. But it’s likely that this isn’t the case because his discussion of India and advent of constitutionalism in the country is filled with claims that are either plainly erroneous or are unbacked by evidence. Most notably, Ackerman asserts that the Indian National Congress was a hegemonic movement party, that its effort at winning control of the state was made as part of a larger quest for a revolution. But as Arun Thiruvengadam, professor of law at Azim Premji, for example, has shown, there are a number of scholars who have presented vast evidence on the Congress’ decidedly elitist goals. Ackerman, however, simply doesn’t engage with these arguments.

On Time Two, Ackerman is equally unmindful. He overcomes the Indian Constituent Assembly’s lack of sovereign legitimacy by citing Jawaharlal Nehru’s famous ‘Tryst with Destiny’ speech as ‘an ecstatic assertion of charismatic authority’ as constituting a transfer of revolutionary power from the Congress to the Assembly. He then proclaims that the Constitution, which the Assembly chaired by BR Ambedkar drafted, was revolutionary in character. In doing so, he once again fails to engage with scholarship that convincingly sees India’s Constitution as a charter of colonial endurance. No doubt, it’s possible to make the argument that the Constitution is a transformative tool, that it seeks to reverse centuries of oppression by both colonial and non-colonial powers alike—indeed, Gautam Bhatia’s book, The Transformative Constitution: A Radical Biography in Nine Acts, published in March this year, makes precisely this argument. But what’s explicit is the Constitution is certainly not revolutionary for the reasons Ackerman offers.

Given the flawed premise underlying the book’s documenting of the first phases of India’s constitutional transition, Time Three, where it charts Indira Gandhi’s often-authoritarian premiership, also lacks in vigour. But in Time Four, the narrative unravels. Here Ackerman lauds the ‘professionally disciplined development of constitutional doctrine’ and the concern that the justices of the Supreme Court have showed towards the ‘fate of the downtrodden’ which has allowed the court to present itself as a ‘bastion of integrity’ helping consolidate constitutionalism in the country. There are a number of problems with this framing, including one, the court’s appalling record in defending basic civil liberties; two, its unprincipled loosening of the requirements of legal standing in bringing a case before it; and three, its increasing usurpation of executive and legislative authority under the guise of ‘doing complete justice’.

Having framed the thesis thus, Ackerman then asks if the Court’s consolidation of constitutionalism is compatible with the revolutionary paradigm that legitimates the Indian regime. This question, he says, was raised by the sweeping electoral victory of the Bharatiya Janata Party led by Narendra Modi in 2014. But in asking this not only does the book make broad generalisations, such as a reference to secularism as a basic facet of the Congress ideology, but it also draws attention to an oncoming assault on constitutionalism by making reference to a case that scarcely fits the portrait.

The Government’s effort at establishing a National Judicial Appointments Commission in 2014, Ackermans says, wasn’t vastly dissimilar to Indira Gandhi’s attempt to manipulate judicial appointments in the 1970s. But unlike the Court’s earlier capitulation, here, in the book’s argument, the Court refused to allow the initiative to go forward, striking down the measure as a violation of the Constitution’s basic structure. The Court’s decision, Ackerman argues, leaves room for a great deal of manoeuvring should interbranch confrontation escalate between ‘Hindu nationalists in the government’ and ‘Enlightenment secularists on the Court’. The first thing to ask here is this: where exactly are these supposed Enlightenment secularists on the judiciary? A reading of the Court’s history will show us that several of its members have been happy to go along with the majoritarian proclivities of different governments, including that of the present regime. What’s worse, Ackerman’s conception ignores decades of developments that culminated with the Court’s decision to invalidate the judicial commission. Among other things, he simply fails to engage with the fact that the present system of appointing judges was installed by the Court in a manner wholly incompatible with the Constitution’s text and history.

All of this makes it difficult to lend much credence to Ackerman’s larger postulation. His belief that the judiciary stands as a last bastion against the majoritarian impulses of government ought to have been systematically destroyed by the Court’s judgments on various critical issues over the last five years. But those decisions—among others, the Court’s failure to strike down clear abuses of constitutional process, such as the enactment of various laws as money bills; its intervention in putting in motion a harrowing updating of the National Register of Citizens in Assam; its decision to uphold a law criminalising defamation—simply do not find mention in the book’s telling. Ackerman says it’s clear that the battle between secularist and Hindu nationalist forces will only be settled by ‘another round of high-energy politics, in which one side finally gains the charismatic authority to reaffirm or modify Nehruvian principles in the name of We the People of the Twenty-First Century’. But if there’s one thing that isn’t clear in India today it’s precisely this claim that Ackerman makes.