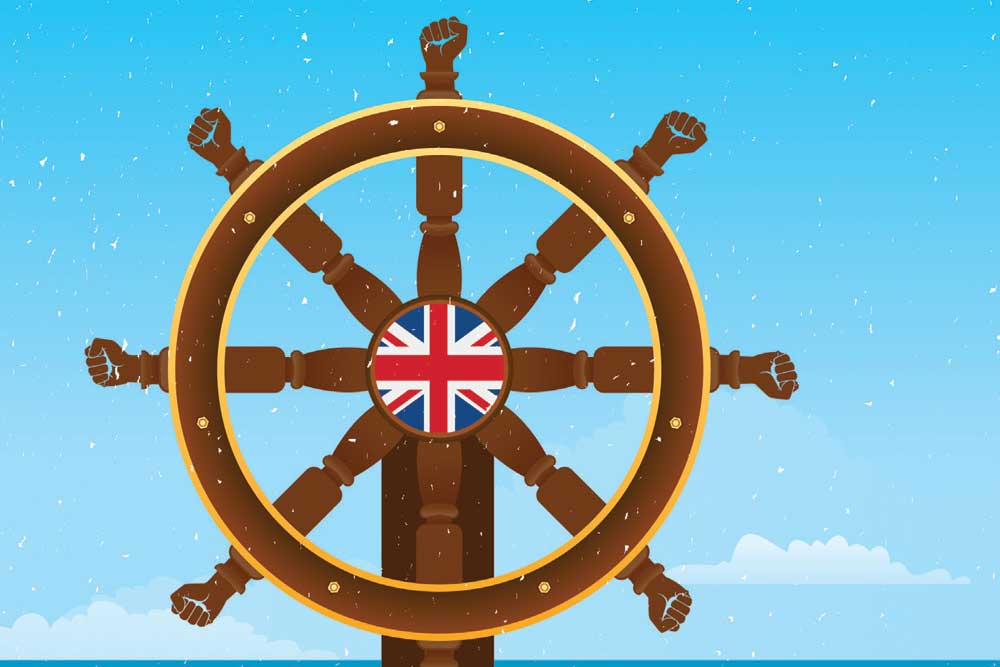 IN 1816, PANDOORANG Dhamdhere—scion of a wealthy Maratha family—embarked on a pilgrimage to Varanasi. Escorted by an armed guard, Pandoorang took a leisurely amble through central India before reaching the holy city. The trip made a hefty dent on his balances, leaving him almost half a million rupees in debt. Pandoorang insisted that all wings of his family should help repay the debt, including the branch led by his deceased brother’s grandson—a boy named Moro Raghunath. A protracted legal battle followed. By 1924, Pandoorang managed to convince the East India Company’s courts in Pune—a city under their control only since 1818—to order Raghunath to pay Rs 245,762 and to place him under house arrest until he coughed up the money. Two years later, the boy’s father-in-law trekked up to Bombay, where he petitioned a tribunal of British judges independent of the Company.

As the so-called ‘King’s Court’ heard the matter, East India Company officials grew concerned. They thought that the case could strike at the foundation of the Company’s power in India. These concerns were not ill-founded. In 1928, the ‘King’s Court’ issued a writ of habeas corpus, demanding that Raghunath be freed and brought before them. The governor of Bombay, John Malcolm, believed that there was ‘more danger [in the dispute] than in the defeat of our armies or the loss of provinces’ and that if the matter was not favourably resolved it might force the Company to ‘shut up shop’ altogether. Indeed, the Moro Raghunath case underscored the confusing agglomeration of British establishments in various parts of India and their conflicting jurisdictions under the Company Raj. And it set the stage for the move towards establishing a more centralised state with unified systems of command.

Historians have seen the ensuing attempt at rationalisation and codification in 1830s as a moment of imperial self-confidence: influenced by the ideas of Utilitarians like Jeremy Bentham, the British allegedly undertook a sweeping exercise in reforming their empire in India. Jon Wilson, however, argues that this is a fantasy. ‘In fact, the paths that led the East India Company to assert its authority more systematically over India were far more unsteady and anxious.’ The Raghunath case was only one among many events that forced the British to improvise at various points.

A historian at King’s College London (where we were formerly colleagues), Wilson claims that his tribe has taken the imperialists’ projections rather at their face value. British rulers from Robert Clive to Mountbatten, he writes, ‘were desperate to convince themselves and the public that they ruled a regime with the power to shape the course of events’. Pax Brittanica was a myth. ‘In practice, the British imperial regime in India was ruled by doubt and anxiety from beginning to end. The institutions mistaken as means of effective power were ad hoc measures to assuage British fear. Most of the time, the actions of British imperial administrators were driven by irrational passions rather than calculated plans. Force was rarely efficient…violence did not create power. Most of the time it only temporarily upheld the illusion of authority.’

This argument powers Wilson’s sweeping narrative from the beginnings of British presence in India in the 1600s down to their departure in 1947. Only a few historians have attempted an overall survey of the British empire in India. The existing works fall into two categories. On the one hand, we have textbooks aimed at students of history. The best of these, such as Sekhar Bandyopadhyay’s Plassey to Partition, provide excellent syntheses of the enormous and growing scholarly writing on the subject. But they naturally focus more on historiographical debates and advances rather than providing a narrative. On the other hand, we have books by popular writers, such as Lawrence James’ Raj, which seek simply to tell a good story—often shot through with clichés that have long since been demolished by professional historians. Wilson’s book is a refreshing departure from both these genres. Not only is it informed by an extensive knowledge of existing academic work and archival sources, but it also makes effective use of the narrative to convey its central argument. As such, the book will appeal equally to other historians and to lay readers.

The book has at least three more appealing features. The first is the space and attention that Wilson devotes to the period preceding the Battle of Plassey and the onset of British control over Bengal. There is a fine chapter, for instance, on series of ‘forgotten wars’ waged by the Company on India’s western seaboard— including the disastrous defeat at Anjengo fort (near Kochi) in 1721. This helps set the context for Wilson’s argument about the pervasive nervousness of British officials of the Company. The second noteworthy aspect of the book is the attention paid to Western and Southern India. Although Wilson cut his teeth as a historian working on 18th century Bengal, he does not—unlike many scholars of Bengal—assume that Bengal can stand in for the rest of India. For instance, his account of the administrative reforms of the late 18th century, including the Permanent Settlement, begins with Polavaram and Rajahmundry in the Telugu- speaking country north of Madras.

Equally welcome is Wilson’s emphasis on the role of violence, not only in the conquest of India but in the sustenance and winding-up of British rule. Here Wilson departs both from certain brands of empire nostalgia purveyed by conservative British historians and from the trend among more radical historians to focus on the ideological and cultural armoury of the Raj. Indeed, Wilson goes to considerable lengths to refute claims of any moral or ideological purpose to the imperial venture in India. The British, in his view, sought power for the sake of power. And by analysing this power at the point of its application rather on high, he makes an important case for avoiding an aggregated view of British power in India. There was plenty of violence, but it was driven by emotions rather than cool rationality. The words ‘anxious’ and ‘anxiety’ can be found on practically every page of this book. It is worth pointing out, however, that historians who share Wilson’s premises have reached quite different conclusions—Bhavani Raman’s excellent book on colonial South India is conspicuously absent in Wilson’s capacious footnotes.

WILSON’S ARGUMENT IS quite convincing for the period of the Company Raj. Using a diverse range of materials, he shows how fraught and nerve-wracking was the Company’s encounter with India. As John Malcolm wrote in 1832, ‘our Eastern empire…has been acquired, and must be maintained, by the sword’. He was clear that the British could ‘never expect active support in the hour of danger from the mass of the population of India’. These sentiments would be echoed almost verbatim by Viceroy Lord Linlithgow in early 1942. Nevertheless, Wilson underestimates the shifts that occurred in the wake of the great rebellion of 1857 as well as the extent to which the Indian population was ‘demilitarised’ in the following decades.

By the time Wilson gets into the 20th century, his narrative seems out of steam and the argument about violence becomes more fuzzy. This is not to claim that violence ceased to remain important—think only of the massacre in Jallianwala Bagh. Rather it is that the application of violence in this period was quite different from that in the middle decades of 19th century. For example, the use of force in internal security duties during the inter-war years was hedged with many restrictions. To be sure, these were thrown overboard during the Quit India rebellion of 1942. But the patterns of violence did differ over this long period.

The larger problem is that despite the centrality of violence to Wilson’s narrative, he does not discuss the main instrument of force: the colonial Indian army. As historians like Dirk Kolff have shown long ago, one of the keys to the East India Company’s success was its ability to corner and eventually monopolise the fluid military labour market in India. Similarly, the ability to raise and train, equip and finance a large standing army from Indian resources was a key achievement of the Company. The changes wrought after 1857 in the structure, composition and function of the Indian army were critical to sustaining the Raj without frequent displays of force. In neglecting these aspects of power and violence, Wilson follows a well-established tradition among historians of India, but it is a move that undermines his own arguments.

This blind spot on the actual workings of power is also visible in the scanty treatment of the economic history as well as the relationship of the Raj to the wider world. This leads Wilson curiously to argue that before World War I, India was of no strategic import to the wider empire—a claim that would have astounded imperial managers in the late 19th century. Notwithstanding these quibbles, Wilson’s book stands as the best general overview of the British empire in India from the vantage point of the rulers. With its wide research, strong argument and fluent prose, India Conquered will be difficult to surpass.

(Srinath Raghavan is a senior fellow at the Centre for Policy Research, New Delhi. His latest book is India’s War: The Making of Modern South Asia, 1939-45)