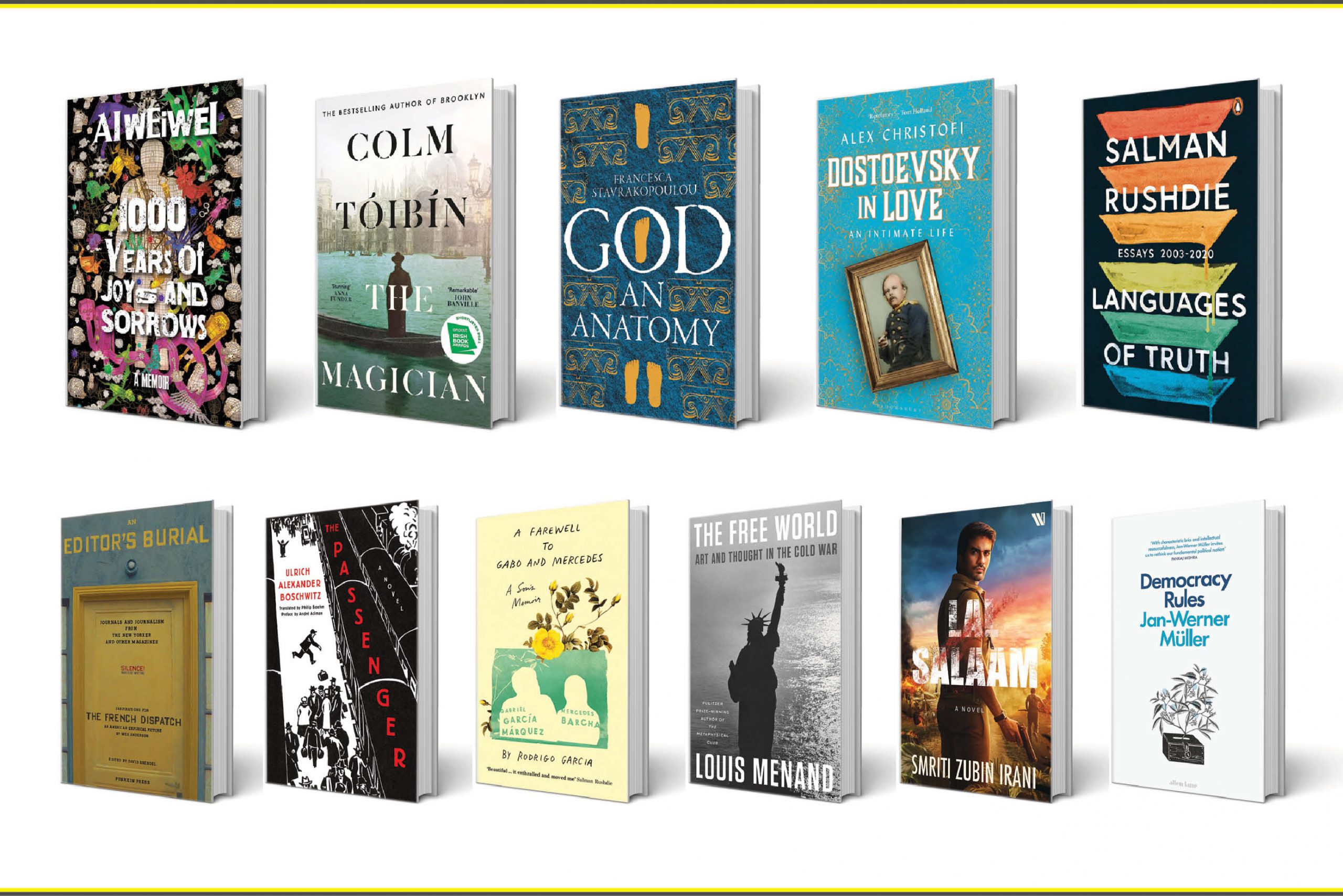 IS IT THAT WE GET TO read more stories, and are surprised by the way they are told, in non-fiction now? I still remain a fiction junkie but the stories, non-fictional stories, that kept me awake ranged from the cultural portraits of the past to the mental sketch of novelists, from God’s autopsy to the last, lost, days of greatness. Dostoevsky’s life is as eventful as his fiction, and biographers and critical readers still search for the man and his struggles behind some of the greatest novels ever written—and for me the greatest won’t ever surpass The Brothers Karamazov. Alex Christofi’s Dostoevsky in Love: An Intimate Life (Bloomsbury Continuum) is a rare kind of biography. The author uses texts from the writer’s oeuvre to contextualise a life that found its fullness of passions in extremes. His childhood, his exile, his poverty, his romance and his triumphs are better told by weaving passages from Dostoevsky’s work into the writer’s life story. An Editor’s Burial: Journals and Journalism from the New Yorker and Other Magazines, edited by David Brendel (Pushkin Press), is an anthology that is meant to contextualise the new film by Wes Anderson, The French Dispatch (which I hope will come on a streaming service sometime soon). The film is apparently an homage to magazine journalism and built around the vintage New Yorker, The French Dispatch of the film, and populated by characters resembling some of its famous bylines. The book, which also carries an interview with the filmmaker, has some wonderful pieces of narrative journalism, including one by Ved Mehta. Here’s one writer remembering his beginning at the New Yorker in the Seventies: “At the magazine, it was plain that any show of friendliness was thought to invite bad luck. No one invited me to pass the time of day with him. The editors and other writers on the staff appeared not to see me; against my will. I had become invisible to everyone except the elevator men.” In A Farewell to Gabo and Mercedes: A Son’s Memoir of Gabriel García Márquez and Mercedes Barcha (HarperVia/Kindle Edition), Rodrigo García relives the last days of his father, whose best advice to his son was: “There is nothing better than something well written. If you can live without writing, don’t write.” Poignant, intimate, and lovingly intrusive, it’s a little book of personal trivia that portrays Márquez on his deathbed, without memory, which was his “tool and raw material” (‘The Last Days of Márquez,’ Open, August 16th, 2021). Salman Rushdie is a novelist who is in a permanent argument with the world, and his dissent extends beyond his fiction, his “wonder tales.” Languages of Truth (Hamish Hamilton), a collection of essays he wrote between 2003 and 2020, is a storyteller’s testament, and a celebration of the story itself, which he thinks is fast vanishing from the cool memoirists of the everydayness, Knausgaardians. The fabulist ploughs his own furrow (‘Testament of the Wonderstruck,’ Open, June 7th, 2021). Louis Menand is one of those academics who can combine scholarship and journalism with such narrative panache. A professor at Harvard University and a staff writer at the New Yorker, he continues to produce weighty tomes and sparkling essays, including one in the latest issue of the magazine. The Free World: Art and Thought in the Cold War (Farrar, Straus and Giroux) is a sprawling cultural history of a period marked by the most intense power struggles. It begins with George Kennan, the diplomat-scholar and the author of the containment theory, who “thought that Stalin was a particularly brutal and cunning dictator, but that Soviet paranoia and insecurity were not the products of the Russian Revolution and had, at bottom, nothing to do with Communism,” but Russia’s historical relationship with the West—and ends with the Vietnam war. Communism, remembers the Chinese artist in exile, Ai Weiwei, makes memory an enemy of the state, and a secret burden for the living. His memoir, 1000 Years of Joys and Sorrows (Crown), can be read as a secret history of a revolution that devoured its ideals and its children with such brutal relish—and the best parts are devoted to his father, a famous poet who was Mao’s contemporary and a Cultural Revolution survivor (‘The Sublime Subversion of Ai Weiwei’, Open, December 13th, 2021). God: An Anatomy (Picador) is scholarship at its audacious best. Francesca Stavrakopoulou, an English professor of theology, remakes the Biblical God in man’s image, but every physical part larger than the usual human size. God is real, and too human to be trapped forever in metaphors and allegories preferred by philosophers. “If it were the corpse of the Biblical God laid out on a slab before us, (we would see) a supersized, human-shaped body with male features and shining, ruddy-red skin, tinged with the smell of rain clouds and incense,” Stavrakopoulou writes after a thrilling exploration of religions and cultures (‘The Shape of God’, Open, December 20th, 2021). We must have by this time read enough democracy-in-decline punditry, some even offering esoteric alternatives such as epistocracy. Here comes Jan-Werner Müller, and his optimism is refreshing in this season of gloom. The professor of politics from Princeton makes a lucid case—maybe not as lucid as his earlier book What Is Populism?—for the glorious uncertainties of democracy, which allow people to change their mindset and the idea of democracy itself (‘Three Cheers for Democracy’, Open, July 26th, 2021).

WISH I HAD read more fiction this year, but reading The Passenger (Metropolitan Books), a novel rediscovered more than eighty years after the tragic death of its author Ulrich Alexander Boschwitz at the age of twenty-seven, was richly rewarding. He wrote this novel as an exile from Nazi Germany, at the onset of Kristallnacht, the Night of the Broken Glass, in 1938. Re-edited and newly translated from German, The Passenger tells the story of Otto Silbermann, a Jewish businessman and war hero who doesn’t look like a Jew. As he becomes a lone railway passenger running away from the November terror of Kristallnacht, he sighs, “They have declared war on me, on me personally.” This novel, raw and spontaneous, can stand alongside the best of Primo Levi and Elie Wiesel (‘If This Is a Man,’ Open, July 19th, 2021). The Magician (Scribner) brings together two of my favourite novelists separated by time and style. It’s Thomas Mann, author of one of the greatest novels of the 20th century, The Magic Mountain, as imagined by Colm Tóibín, who had done this before with Henry James in The Master. The novel is a linear, unhurried, biographical portrait of Mann as a sexually conflicted writer and exile, and the imagination is never overwhelming, maybe as poised as the story of Hans Castorp in The Magic Mountain. Smriti Irani’s first novel Lal Salaam (Westland) is an important work because she, an original from the right side of Indian politics, dares to redeem a subject from the rhetorical inanities of both politicians and sub-rural thugs pretending to be revolutionaries. Set in the tropical badlands of the so-called Maoists, this pacy whodunit demystifies as well as humanises an idea that India is still fighting against. Irani wields the power of imagination with a touch of lightness but without ever losing the seriousness of her creative intentions.