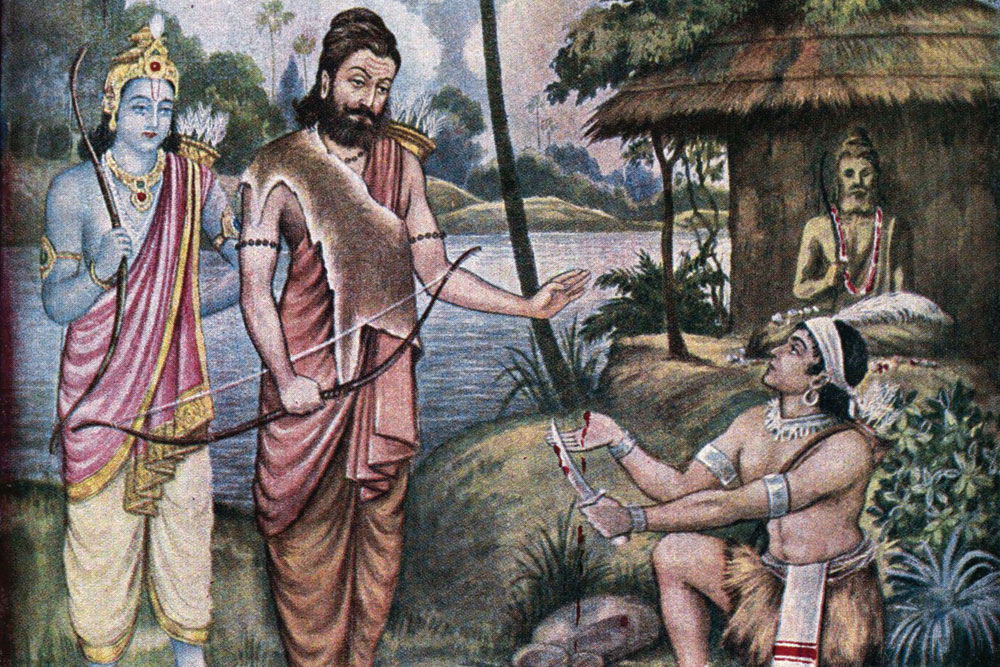 IS THERE A ‘HINDU way of diplomacy’? This is the intriguing premise of Deep K Datta-Ray’s book The Making of Indian Diplomacy, which argues that the roots and wellsprings of India’s diplomatic engagement with the world are fundamentally different from those of the West. Written for a DPhil in International Relations from the University of Sussex, the book is a provocative and original, if highly debatable, contribution to a little- trodden field of academic endeavour.

Dr Datta-Ray, an assistant professor at OP Jindal Global University’s School of International Affairs, points out in an early epigraph that Westerners have found it difficult to understand Indian diplomacy. ‘India is a democracy,’ observed Henry Kissinger in his Does America Need a Foreign Policy? (2001). ‘Its ruling group speaks excellent English… All of its leaders have studied in Western universities. Yet Americans have great difficulty in coming to terms with the way Indian leaders approach foreign policy.’

The only outsider to have been embedded in India’s notoriously opaque and inaccessible Ministry of External Affairs (MEA), Datta-Ray was attached to India’s Government and saw its workings intimately. His purpose, he argues, is to explicate the rationale behind Indian diplomacy and refute the idea that Indians have derived their diplomatic traditions from the West.

Using a ‘producer-centred-research’ (PCR) approach—one which seeks to present the world in terms of the people being studied—and anchoring it, forgivably, in academic theory, Datta-Ray argues that Indian diplomatic thought is not Eurocentric but anchored in the Mahabharata, which predates modern Western diplomacy by several centuries.

The book, as befits a doctoral dissertation, is scholarly, and starts with a fair burden of theory, with obligatory references to ‘cognitive reflexivity’, ‘anomie’ and ‘intertextuality’. Fortunately, however, it then settles down to become both readable and anecdotal. It must be the only doctoral thesis to have incorporated references to the cocktail parties at which Indian diplomats unwind!

Datta-Ray sees anarchy, alienation and civilisation as the three ways in which modernity has been used to contain Indian diplomacy within Eurocentric ideas of progress. But this modernity, he says, is merely the West’s reassertion of its own culture. Diplomacy, as seen by the West, operates within the conceptual framework of International Relations theory, which is anarchical and binary, and rests on the expectation of violence and denial of unity. Indians are different, since thanks to Hindu philosophy, we do not see violence and conflict as endemic to human society.

Since the Treaty of Westphalia in 1648, Datta-Ray argues, the Western theory of the sovereign nation-state and its pursuit of narrow self-interest at the expense of the common good of all nations are the fundamental evils of the international system. International relations are a zero- sum game in Western ‘power politics’— one nation’s win is another’s loss. This makes violence endemic to the Western approach, whereas India sees the totality of human civilisation.

Datta-Ray argues that the Mahabharata and its concepts are the ‘tool kit’ of Indian diplomacy, one that thrived long before European modernity. He demonstrates that the Mahabharata can be seen more as an intellectual text and not a religious one. The values embedded in it (such as dharma) represent a higher form of rationality than Western International Relations theory.

Our nationalist movement invented its own tropes. Gandhi’s was a Hindu mind’s resistance to Western rule. His legacy informs Indian diplomatic practice even today. The author describes Satyagraha as ‘no more than the logical outcome of a rationality that governs the everyday lives of the sort of people who become Indian diplomat’.

As is apparent, this is contestable ground. Former Foreign Secretary Jagat Mehta is quoted as having said of his report on the Sino-Indian border issue, “Our report was not a doctoral thesis on the merits of the case. It was advocacy to support the given stand of our government.” Dutta-Ray’s book is both a doctoral thesis and, as theses are required to be, impassioned advocacy for the argument it makes. As such it makes for stimulating reading, even though I find its argument overstated.

Delving into India’s traditional thought to claim that the Indian approach to the world is based on non- violence anchored in the Hindu spiritual tradition is debatable. The Hindu philosophical approach to the world stressed the concept of contextualism and is fundamentally distinct from the intellectual history of the Christian, Muslim and Jewish faiths. To Datta-Ray, the Mahabharata is a prime example of the fact that philosophical Hindu texts do not spell out what is right and wrong; unlike the linearity of Western thinking, they require the individual to judge each situation in its context, within a framework of dharma. Given the Hindu faith’s emphasis on the interconnectedness of all beings, violence is rejected as ultimately a form of self-harm.

Datta-Ray gets carried away, applying his views of the Hindu faith to the innate Indian character, and arguing that this explains why Indian Muslims had also proven less susceptible to radical jihadist propaganda as Muslims living in other parts of the world. This denies the prevalence of diverse forms of thought and philosophical influence on the Indian palimpsest, as well as the modern precepts of foreign policy-making that are drilled into every Indian diplomat from his trainee days to mid-career courses at Harvard or the Fletcher School of Law & Diplomacy.

Thus Datta-Ray seizes on the Indo-US Nuclear Deal to argue that India has always been exceptional in the nuclear debate and has remained unique even after joining the international nuclear community. He sees it as a triumph of Hindu diplomacy, through which India deconstructed the West’s nuclear order erected after World War II, broke a Western- led international cartel, and secured exceptional privileges for itself without giving very much in return—becoming a part of the global nuclear system while changing it utterly.

This, frankly, is fantasy. Yes, one can concede that the concepts of non- alignment, peaceful co-existence, and Panchsheel were new to global diplomacy when they were propounded, but the extent to which they were ‘Hindu’ rather than merely ‘post-colonial’ remains debatable. One can see the Hindu idea of ‘neti, neti’ in the famous concepts India has propounded that, through negations, transcend the negative: non- violence is not passivity, non-alignment is not neutrality, and non-interference is not abstinence from action. But nuclear negotiations followed a structured logic of geopolitics where Washington’s interests, as seen by the Bush administration, coincided with New Delhi’s. They had nothing to do with the Mahabharata.

Is ‘vasudevakutumbakam’ substantially different in either precept or practice from Western universalism and the ‘One World’ movement of the 1940s? As for Indian foreign policy under the BJP, the diplomatic techniques used by Krishna as the Pandavas’ emissary to the Kaurava court in the Mahabharata are hardly those of Narendra Modi in China or the MEA in Nepal.

Indeed, where is Hindu non-violence in India’s nuclear policies, its military postures, or such recent events as the raid into Myanmar? The Government led by the avowedly Hindutva-professing BJP is, by Datta-Ray’s yardstick, the least ‘Hindu’ of India’s governments because of its robust desire to demonstrate its own muscularity: There had been nine such raids in the past, but none announced in the bellicose language as the one the current Government had chosen to use.

For Datta-Ray to claim a tradition of Indian spiritual thought based on non-violence, forgiveness, truth and the unity of all creation is to overlook counter-examples even in the Mahabharata itself. Where does the story of Ashwathama—where Yudhisthira lied to Guru Dronacharya in order to demoralise him in battle—or the Ekalavya episode fit into Datta-Ray’s vision? Ray’s case that the Mahabharata tradition makes Indian diplomacy more receptive to the other side’s arguments in negotiation flies in the face of widespread perception on the part of foreign diplomats (as cited by the astute diplomat and analyst David Malone) that more often than not, Indian diplomats are better at winning arguments than friends.

The usefulness of categories such as ‘Indian’ and ‘Western’ in a world where there is so much inter-penetration of ideas and lifestyles is limited. Nehru’s, for instance, was not a purely ‘Hindu’ mind; deeply influenced by his extensive readings of Western works and his education at Harrow and Cambridge, he was impatient with many aspects of the Indian way of doing things, dismissive of sadhus and maulvis, and rarely alluded to the sacred texts or the epics. Some of his critics called him the ‘last Englishman left in India’. To suggest that this agnostic rationalist—the undisputed progenitor of Indian foreign policy— was anchored in the Mahabharata is, to put it mildly, a stretch.

The argument also falters on the specifics. For Datta-Ray, the principle of tolerance and forgiveness towards enemies is seen to be an essentially Hindu idea based on the Mahabharata—but surely it is nowhere better applied than by Muslim Bangladesh following the bitter war of 1971 with Pakistan, where despite the genocide of a million innocents by the Pakistani Army, Pakistan was hailed as a friend within five years.

As the author of The Great Indian Novel, which built an entire satire on the premise that the Mahabharata can be used to explain much about India’s society and politics, I am more than a little receptive to Datta-Ray’s thesis. But he goes too far with it. Still, this is a valuable contribution to the limited canon of literature on Indian diplomacy. By offering original ideas in a field dominated by Western theory, he has stirred a pot that had stopped simmering. I look forward to his next work.