×
Books: I Know What You Will Read This Summer

Our contributor offers a noir formula to thriller seekers 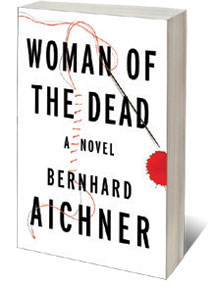 A revenge story—one where you sit with the heroine in the payback time chair. In the first chapter, ‘Eight years earlier’, Brunhilde Blum (she hates being called Brunhilde), 24, drowns her adopted parents while out on a fishing trip. She was adopted by a couple who ‘trained her like a domestic pet.’ Blum marries Mark, a policeman, who hears her cries in the boat and gathers her in his arms. Eight years and two kids later, Mark is run over by a car. At first, she thinks it is an accident, but when she is clearing out his belongings, including his cell phone, she hears a recording of Mark’s interview with a woman. Blum tracks down the woman and hears a horrific story about rape, murder, sodomy and other brutalities inflicted on her and two others by five men in masks—the photographer, the huntsman, the priest, the chef, and the clown. Blum hunts them down because one of them killed her husband who was getting too close. Blum has access to everything that is needed to murder and make the bodies disappear. A roller coaster of a revenge fest. 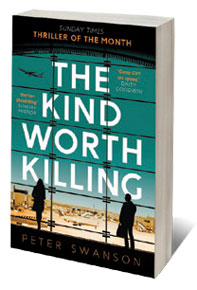 The Talented Mr Ripley meets A Stranger on the Train is the way one can sum up the latest offering by Peter Swanson. At first glance, it is a simple and age-old story. Husband suspects wife of having an affair with the house contractor. Meets a woman in the airport who turns out to be an old acquaintance of the wife. Confides in her since they are, after all, in the airport bubble of time. The duo concoct the nitty-gritty of the wife’s murder. Husband returns to his life. Then come the twists, and this is what makes the book such an addictive read. The real story is the cat and mouse game after the first murder, and not the initial set up. It all hinges on the way Swanson alternates between putting the reader inside the heads of the husband, the wife, the stranger and the police detective. It allows us to view the doer, the deed, and the chase from different angles. This adds layers and texture to the tale. Styled like a noir thriller, where the characters try to be the murderers rather than the victims, The Kind Worth Killing’s snappy pace and twists make it an enjoyable read. 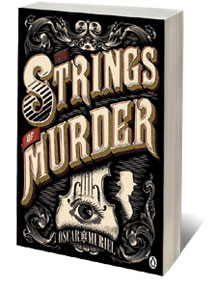 A fastidious Englishman is sent undercover to Edinburgh, or to quote him, ‘Edin-bloody-burgh’, to solve the murder of a violinist who may or may not have been killed by a Jack the Ripper copycat. It is 1888, the height of the Ripper scare. Inspector Ian Frey joins a new subdivision under the watch of Inspector ‘Nine-nails’ (a story there) McGray, devoted to investigating apparitions. The politically incorrect McGray who, to Frey’s horror, seems to believe in ghosts, is a great foil for a rationalist like Frey who struggles to understand Scottish brogue and the uncouth provincials who eat haggis and live in urine-soaked squalor. The description of Edinburgh transports us to a world of ‘raven-black columns of smoke hovering above the city’ and dark streets where horrors reside. Oh, and a violin owned by the most virtuoso violin player in history, Paganini, is involved. 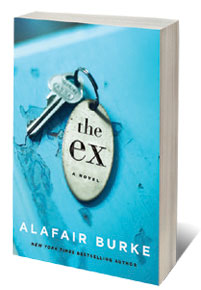 Most of us are ashamed of some things we have done in life, and would love to get a chance to fix it. Olivia Randall has been a two-timing cheat and a compulsive liar with her ex-fiancé, Jack Harris. The book begins with a phone call 20 years later. Her ex-fiancé’s daughter is on the line. She wants Olivia, now a successful criminal defence lawyer in New York, to find out why the police have her father, and whether he has been arrested. Olivia discovers that Jack, now an accomplished writer, is facing charges of a triple murder, and one of the victims is the father of the boy who went on a killing spree in Penn station and shot dead Jack’s wife and two others. Jack was on the scene, and his story about an online date with a woman whom he had met while jogging is not credible to the police. Is Jack the killer? Does he have a dark side? Or has he been framed? Olivia teeters between believing in his innocence, and suspecting that he is guilty. Olivia’s flaws humanise her character in a way that readers can easily empathise with her. Yet, her actions are motivated by a sense of wanting to absolve herself of the guilt. Representing Jack is her way of making amends for a decision she had made 20 years ago that had tragic consequences. The Ex can be devoured in one sitting on a summer afternoon with the air conditioner or the cooler on (if you are in sweltering Delhi). 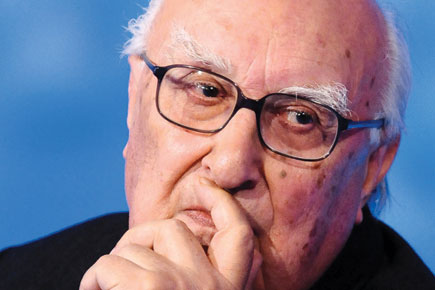 It is 1985. Vigata on the banks of a vivid blue sea in sunwashed Sicily, a foodie’s paradise, awaits the arrival of Inspector Salvo Montalbano, who, to his relief, has been transferred from a bleak mountain town to this coastal city. He arrives incognito and witnesses a youth jump out of a car and assault a middle-aged man. Montalbano corrects the car registration noted by the traffic cop (a wiser soul who was otherwise engaged—chatting to a couple of dogs, as it happened…), and finds himself called to court as a witness in the assault case. It draws him into the web woven by a dangerous mafia family. Ensnared in this web is a mysterious 18-year-old girl, a domestic, who seems terrified but is in the courthouse each day with a gun, which she finally brandishes at a judge. The judge is one of the few who has done nobody any harm, so why does she have a vendetta against him, wonders Montalbano. We see all the elements—the sly humour, snappy dialogue, connoisseurship, intuition and devil-may-care attitude—that have made Montalbano so beloved among mystery aficionados. The anthology includes 20 other stories from different stages in Montalbano’s career. The ‘Cat and the Goldfinch’ with its eccentric characters and ‘Mortally Wounded’ with a delightfully twisty tale are other gems in the volume.

OLD FAVOURITES WORTH a visit include Boris Akunin’s Erast Fandorin series in Tsarist Russia; Josephine Tey’s The Daughter of Time and Brat Farrar in mid-20th century Britain; Colin Cotterill’s Dr Siri Paiboun, the twice retired ex-National coroner of Laos who has shamanistic powers, eccentric friends, and a very sardonic sense of humour best viewed in the early books in the series such as The Coroner’s Lunch and Disco for the Departed; anything by Adrian McKinty who seems to be able to write gritty Irish noir as well as switch to the point of view of a female cop from Cuba (Fifty Grand); and Maurizio de Giovanni leads the Italian brigade with his Commissario Ricciardi series, a policeman who can see dead people in Fascist era Naples. As for humorous cosies, MC Beaton’s Agatha Raisin series (especially the earlier ones) is definitely worth reading, as are Simon Brett’s mysteries set in Fethering, and John Mortimer’s Rumpole of the Bailey. Further back in time, ancient Rome (Steven Saylor’s Gordinius the Finder), Shrewsbury Abbey (Ellis Peter’s Cadfael) and a Benedictine monastery in northern Italy ( the incomparable and much mourned Umberto Eco’s The Name of the Rose) are wonderfully evocative of times past. And finally, anything by the grand dame of the golden age of mysteries— Agatha Christie. So many mysteries, so little time… Happy Reading!