CP Surendran: ‘Poetry is the handle to the door of human experience’ 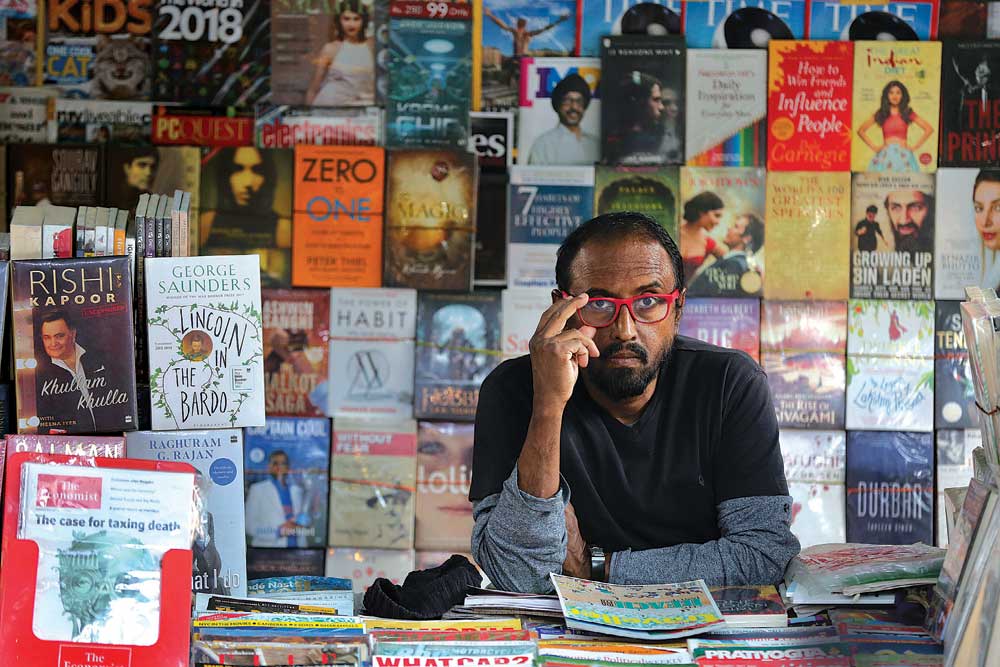 CP SURENDRAN WRITES at a long black table, marked with rings from tea- cups, empty but for his laptop and a glass of water. He doesn’t write by hand. The computer, he finds, “understands some humans are deficient.” He sits off-centre on the bench, so he can exit with ease, as he says, in an emergency. The habit is from his schooldays, when he sat impatiently at the end of the bench, to slip out quickly when the bell rang. The table and bench were custom- made to his exact measurements by a Parsi woman in Mumbai out of sheesham. When he writes for hours—eight to 10 when he’s working on fiction—he says, “the hard wood reminds me how uncomfortable I am with the world.” Above the table, two photographs hang on the wall. Surendran travelled back to Trivandrum to photograph a road in front of the house he lived in as a child, and also a bearded dwarf who lived as a statue on the parapet of a neighbouring house. Though the dwarf’s house remains, Surendran’s is gone.

His earliest memory of writing is of a friend in kindergarten, Hari, drawing alphabets of an “occult language” in the air. It wasn’t Malayalam—the language whose strange sounds they were learning. The mesmerised Surendran watched Hari shape his lips to “mouth the sounds of his secret script”. He says, “I think he was practising English, a language I didn’t know at the time, and now know in parts and in spurts.”

He has just published a new collection of poems, Available Light (Speaking Tiger; 239 pages; Rs 499 ). “What the hell to do next?” he asks, “Should I stop writing poetry? Did I write all this? How?” Works from four previous books of poetry combine with his new poems to form this latest collection. The older books are important to him in their own way—Gemini II for its innocence, Posthumous Poems for its persistence, Portraits of the Space We Occupy for the 39 poems in it on his father, a writer who died of Alzheimer’s. He says, “It’s when I wrote ‘Catafalque’ that I realised how beautifully I could have loved him. You are taught when you write.” In Available Light, his hope is that he has “moved from earlier self-imposed limitations to a larger universe, both politically and poetry-wise.” He believes he is, “now a little more in control” of his material: “I believe good poetry happens when words and life-experience meet like coordinates in a graph.” Though he has moved on, he finds that critics remain fixated on his early work and do not allow for his poetry’s growth.

In compiling Available Light, he has culled the weak and the repetitive. The weak poem, he believes, is one “where the feeling is shallow, the heart missing, the line not tight.” The good poem “quivers, like a dart that has just gone home.” He brushed up some of the older poems to make them stronger. The revised ‘The Colours of The Season’s Best Dreams’ , for example, is a letter addressed to a character who was not even present in the poem’s earlier version.

Many of the poems in Available Light are political. In ‘Sparrows’, he slows down time to record the moments before, during and after a bomb explodes. Other poems echo this concern with the loss of human lives as the rest of the world moves forward. In ‘The Plain of Jars’, he writes, ‘…it might rain anytime.’ In ‘Headcount’, he finds a new day ‘clear, loud’ as ever, and ‘shorter by a head’.

‘The political poems are not deliberated upon and forced into existence. They are precipitated by the painful absurdity of the events around us ’

“All poems tend to slow time down. That is what poetry is. A fossil of time,” Surendran says. “The political poems are not deliberated upon and forced into existence. They are precipitated by the painful absurdity of the events around us. The phrase ‘shorter by a head’ is from a poem about Mohammad Akhlaq who was lynched in Dadri in 2014 for dealing in beef which magically turned out to be mutton. Perhaps, it takes a murder to bring out the true nature of meat.”

The general state of political poetry in India worries him. Performance poetry, he feels, values empty rhetoric over the literary value of a poem. The trouble with political poems, he says, is that they “run every danger of becoming a pale version of Maya Angelou’s best rhetoric creations.” He acknowledges that in a country like India, it would be a luxury to separate political realities from literature. He cites literary stalwarts like Chekhov, who argued that for literature to last, “one must not dwell on politics of the moment.” The conclusion he draws is that “one must take care that the righteousness of the cause of the political poem is no guarantee of its literary value. I am hoping I have somewhat been able to practice that ideal.”

Who are the writers who have been instructive to his craft? Unexpectedly, he says detective fiction has given him “a sense of pace and events”. Books by James Hadley Chase, Hammond Innes, Alistair Maclean, Jim Thompson. And Durga Prasad Khatri, a Bengali detective novelist of the last century whose translations in Malayalam he read in his village library “with the sense that a new planet was rising” right in front of him.

His sense of place and prose comes from Malcolm Lowry, Hemingway, Camus, Joyce, Lawrence Durrell, TE Lawrence. Gabriel Garcia Márquez showed him what could be done with the novel format, and taught him “how a sentence could have an epic telescoped in it.” Though, he’s certain that Márquez’s One Hundred Years of Solitude would have been rejected had it been sent to Indian publishers for “meandering”. Jorge Luis Borges revealed to him “how the most inconsequential thing could turn out to be the obsession that organises the mystery of a work”.

As for poetry, Geoffrey Hill showed him “the darkest poetry is burning with light at its heart”, Ted Hughes “packed muscle in a line”, Eliot told him “a mental disorder can be made up of beautiful startling phrases”, and Charles Simic explained “how poetry could be built of a series of simple absences”. And Graham Green for presentation of a scene; and for showing lust in kindness, kindness in lust.

What he values in poetry is how “a turn of phrase throws a new light on an old thing. It is the handle to the door of the human experience. When Hamlet says, ‘To be or not to be’, it is just six words. But how they sum up life. To tap the same Shakespearian vein, ‘Whether ‘tis nobler in the mind to suffer / The slings and arrows of outrageous fortune, / Or to take arms against a sea of troubles, /And by opposing end them?’ These few words squeeze into their small physical circle the vast existential dimensions peculiar to man.”

At the moment, he is looking for a publisher for his latest novel, Ceremony of Innocence, which includes a fleeting appearance by a publisher who only encourages poetry by way of nursery rhymes. If and when he writes poems again, they “will need to break fresh ground”. But for now, he laments, “there is not a single good thought as a sentence in my head. Not one. It’s emptiness interspersed with reddish-orange streaks of a vague anxiety. That’s terrible, don’t you think?”