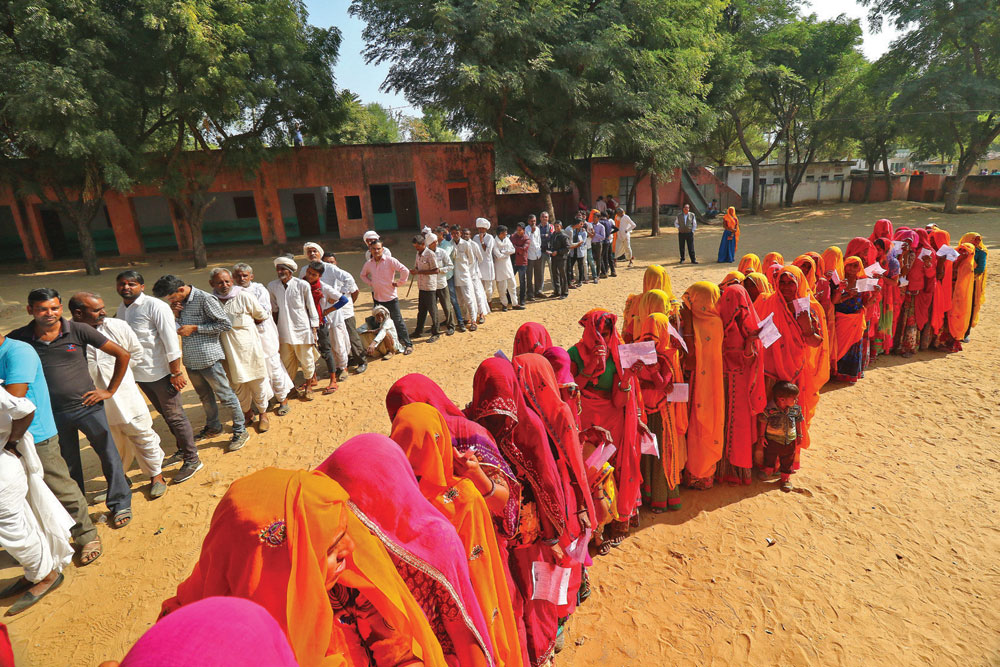 VOTE IS TO politics what money is to economics. It is the foundational transaction that grants moral authority to our elected representatives to rule and legislate on our behalf. It must however be noted that elections are only a process, they are not the product. They are only a means to an end. It’s a mechanism devised to filter and consolidate what Rousseau called the ‘General Will’ but how effectively do the elections aggregate the General Will that is so fragmented and polarised, that is uneducated and ill-informed, so poor and open to corruption—is the challenge that faces the Election Commission of India from the first election till date.

Secondly, no ruling party has ever managed to secure a clear majority of over 50 per cent votes. Indian elections almost invariably put political parties in power with less than 35 per cent of electoral vote, which means that 65 per cent of popular votes have gone against it. Such being the case, is it correct for a leader of a party that comes to power with only about one-third of popular votes to speak on behalf of 125 crore Indians? Well, such are the vagaries of democracy.

Thirdly, if winning elections at any cost, or having lost elections and then forming coalitions with parties that have no commonality of vision or programme and grabbing power, does it still represent the popular will? The distortions of our democracy raise serious questions on its viability and authenticity. The constant electioneering mode of the present times has led some analysts to call the present trend as more of a ‘psephocracy’ than democracy.

The two books by our former Chief Election Commissioners (CEC) detail the grandeur of the largest democratic experiment on earth wherein about 834 million voters cast their vote in 2014 and handed over the affairs of their life to about 550 members of Lok Sabha making them the ultimate arbiters of governance.

The Great March of Democracy, edited by former CEC SY Quraishi presents the views of an eminent bunch of experts, most of who have either been involved in conducting elections or researching into the subject. One of the most fascinating accounts is by Dr Ornit Shani who writes about ‘The Origins of Trust in India’s Electoral Process’ wherein she notes the diligence and meticulousness of the Constituent Assembly Secretariat that went about collecting the first electoral rolls in September 1947, well ahead of the enactment of the Constitution. Some of their correspondence, particularly with the border states of Bengal and Punjab during the turbulence of Partition may still be relevant now as we face the momentous and controversial task of preparing a new National Register of Citizens in Assam today. Their sensitivity and diligence in an era when there were no emails and every letter had to be addressed and sent back by post reflects an unparalleled commitment to ensuring the right of every Indian to vote, no matter what his religion, caste or region was. And, of course, there is a write-up by TN Seshan, the man who put the fear of god into our politicians, and the other by Christophe Jaffrelot on him. Another fascinating article is by Taylor C Sherman on ‘The First and Last General Election in Hyderabad State’ that brings out not only the uncertainty of elections in the Nizam’s kingdom but also the conflicting nuances between the Hyderabad State Congress, the communist Andhra Mahasabha and the Majlis-e-Ittehadul Muslimeen and its Razakar volunteer force, as they fell upon each other to persuade the Nizam and one another to either join or remain out of the Indian Union. There are some illuminating essays by Bhiku Parikh, Somnath Chatterjee, Yogendra Yadav, SY Quraishi and of course by Milan Vaishnav who is now the best-known expert on the role of money and muscle in Indian politics. A rather unexplored issue is the role of women in the Indian electoral system and that gets highlighted by Naina Lal Kidwai and Ela R Bhat who focus on the empowerment of women through vote.

The other book, Every Vote Counts by Navin Chawla, on the other hand is a labour of love, love of himself. One feels that the author is constantly justifying his position in the Election Commission, having been elevated to the position of CEC in April 2009, in the midst of an ongoing national election, under very controversial circumstances. The widespread belief that he was a Congress appointee to counter the BJP-leaning Gopalswami did sully the reputation of the Election Commission at that time. Goplaswami, then CEC had alleged that Chawla discharged his duties as Election Commissioner in a partisan manner, seeking to further the interests of ‘one party’ and also that Chawla ‘would take breaks during crucial meetings and secretly confer with Congress party functionaries’ and therefore sought his removal. Of course, neither the government of the day (of the Congress party) nor the Supreme Court agreed with Gopalswami. There is an unusually long chapter on this episode with several editorials by N Ram of The Hindu annexed in support of Chawla’s position. Gopalswami’s subsequent appointment as head of a RSS affiliate Vivekananda Education Society amply substantiated Congress’ misgivings.

Coming back to the book by Chawla, one must commend his tenacity in covering every aspect of the subject at hand from electoral rolls, to the introduction of EPIC (Electoral Photo Identity Cards), to the controversy surrounding the EVMs and the introduction of VVPAT, the rise of paid news and the new social media channels and the role of Cambridge Analytica, etcetera. He also dwells at length on the power of money and the role of criminals in elections and the need for electoral reforms that have been taken up by successive Election Commissioners and the determined resistance by the political class in preventing the same. While almost all these subjects are covered in the book by Quraishi, there are a few new chapters on issues such as Maoist Violence and Elections, and the famous J&K elections of 2008, probably the last one with a record turn-out of voters and the most free and fair elections since then, despite violence and the threats of boycott by the Hurriyat Conference. Chawla’s book is an elaborate examination of all the strengths and weaknesses of not only our democratic process but also of the problems inherent in the Election Commission, particularly when a Chief Election Commissioner decides to undermine an Election Commissioner, a plight faced by the author. The excessive details of his day-to-day fighting with N Gopalswami mar the value of the book which is otherwise an exhaustive compilation on our election process and its deep -rooted faultlines.

The fact that Chawla soon asserted his independence by his extremely professional and efficient conduct of duties and took action against the alleged malpractices of Congress governments in Rajasthan, Andhra Pradesh and Assam did much to establish his reputation as an impartial and independent arbiter.

Of the two books, the one edited by Quraishi stands out as a more fascinating account of our grand democratic experiment with some magical moments in its history. Chawla’s book on the other hand is more like a CAG Report that gives exhaustive details of an entire institution with the whiff of a scam in the end.