Nicolas Hénin: ‘France Should Not Make the Mistake the US Made After 9/11’ 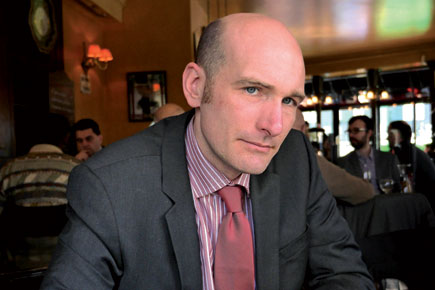 French journalist Nicolas Hénin wrote the best-selling Jihad Academy: The Rise of Islamic State after he was released by ISIS in April last year, 10 months after they captured him from the Syrian town of Raqqa and held him in inhuman conditions. He was held hostage along with James Foley, Steven Sotloff, Alan Henning and David Haines, whose videotaped executions shocked the world. In his book, Hénin dwells at length on his ordeal. He also talks about his meeting with Mehdi Nemmouche, or ‘Jihadi John’, one of his kidnappers, many of whom watched Hollywood movies and appeared to have little association with Islamic ways. Hénin says that the exodus of refugees to Europe is a blow to IS propaganda that Western societies are not suitable for Muslims. “That is why they are targeting places like Paris for attack,” he says, emphasising that Europe must not fall prey to Islamist designs like the US did, which after 9/11 went for an indiscriminate war on Iraq, where the IS was born. The IS later expanded to Syria and now presides over the destiny of more than 10 million people. He spoke to Executive Editor Ullekh NP from Paris. Excerpts

As someone who has spent 10 months as a captive of the IS, what do you think are the key factors that motivate that organisation?
The IS is looking at the destruction of Western society. They want to force the rest of us to live in fear. They terrorise their own people and those elsewhere. They want to constantly provoke Western countries and make them respond in a manner that will be counter-productive to the interests of those countries. They are striving to change the mindsets of people in Western societies and to change the way they typically react.

Could you elaborate on what kind of reaction they seek?
Yes. What is needed is not always revenge, but deliberation. It is the nature of the West’s response that decides whether an Islamist terror strike is a success or a failure. According to me, 9/11 was the beginning of a strategic failure. Osama bin Laden and his team provoked, and the US fell into their trap of responding the way Al-Qaeda wanted the Americans to respond: create a lot of chaos in the Middle East and the Muslim world. And in these very difficult days in France we shall remember the lessons from 9/11, which marked the beginning of a catastrophic failure. The completion of the attack in New York—the real success, I mean—was not the collapse of the twin towers. It was the destruction of Afghanistan and Iraq, the whole war on terror. Naturally, Iraq was destined to become the hotbed of Islamism.

How was life as a hostage?
The months I spent with IS militants made me more powerful. For most people, IS guys are remote terrorists. They are something totally strange. They are mostly known to people in the outside world only through their propaganda videos. I got a unique perspective because I saw these people up close. As I lived among them [and] even though I was a hostage, I know them intimately enough not to be afraid of them anymore. Because these people want the world to look at them as if they are the epitome of evil—in truth, they are not evil, they are only the symptoms of evil. I have explained all that in detail in my book, Jihad Academy.

Now, you have to understand that the global community doesn’t really discover truths easily. They need some faces, like that of James Foley, my cellmate. The fact is that Syrian people were killed and continue to get killed now, before and after Foley’s death. All lives are equally important.

Who is evil then?
From a practical point of view, IS is an improved Al-Qaeda. It is from Al-Qaeda that IS learnt their lessons. Apparently, they have learnt quite a lot. They have learnt from the weaknesses and strengths of Al-Qaeda and have adapted very well. The point to stress is that IS happened thanks to the mistakes of global powers. The real evil in Syria is the president of Syria, Bashar Hafez al-Assad.

France is known to have sold weapons unscrupulously, without worrying about who gets to use these arms. So are these attacks in Paris a case of chickens coming home to roost?
Somehow, yes. The real problem is the relationship France has developed with Gulf nations such as Saudi Arabia and Egypt. Our political stance is in total contradiction with our engagement alongside the Syrian people. We cannot say on one hand that ‘we stand along with you and we understand your message and the need for freedom and political inclusiveness’ to Syrian people and on the other use Saudi Arabia as a cash machine for our arms companies. See, Saudi Arabia is indeed a cash machine for France because Saudi Arabia buys weapons from us in large quantities—that country doesn’t acquire weapons and ammunition only for themselves but also for neighbours, and countries like Lebanon and Egypt besides others. We as a country also tend to ignore the crimes being perpetrated on the Egyptian people by its rulers.

Do you still believe that Bashar al-Assad is far more dangerous to the Syrian people than IS itself? After all, IS is an exportable idea.
Of course he is. The figures tell you the story. They are explicit. For every civilian killed by the IS, two dozen civilians were killed by the Assad regime.

What are the political changes that you foresee after the latest attack in Paris?
I would be extremely worried to see Bashar al-Assad comfortably in the saddle. His regime is more responsible than anyone else for the attack that happened in Paris on Friday night. Yes, it has not happened on his orders, but remember it is he who let the IS flourish… He saw the IS as a threat to [his] moderate opposition and so he didn’t touch the IS until it became a bigger entity. The moderates came under attack from both under the Assad regime.

Who do you think finances the IS? Do you think weapons from Western countries may have landed in IS hands?
They finance themselves. They hold territory and they have local resources to do it. When you have money you can always get arms. There is a large flow of weapons available in Syria. France never provided weapons to the IS.

What about the US?
The Iraqi army had a lot of American weapons. IS captured thousands of Humvees and weapons from the Iraqi army, especially after the fall of northern Iraq city of Mosul.

How serious is the threat of jihadis infiltrating Europe along with refugees from Iraq and Syria?
Refugees were a blow to the IS agenda because its propaganda [says] that Western societies are not suitable for Muslims and that Muslims should leave Western societies and emigrate to Muslim lands. Look at the whole picture now. That is why I think they are trying to make Western people close their doors to refugees from Muslim-dominated countries.

France has shut its borders to refugees now. How do you think it will affect the idea of France as a multi-cultural society and champion of pan-Europeanism?
We are currently heading for various elections in this country. And such a scenario opens the doors for populism and unwanted patriotism, which, to my opinion, are totally counter-productive. Targeting refugees is a big mistake.

What should be done to manage security threats?
All problems come from Syria. The solution should also come from Syria. I don’t believe that increased bombings will be a solution. What we have to do is create a political roadmap for an exit of Bashar Hafez al-Assad and the end of a civil war. Any such roadmap is an illusion with Bashar al-Assad at the helm. See, what happened to us is terrible: first the Charlie Hebdo attack and then this one. I am not underestimating our suffering. But let’s not forget that over the last four years, 200 Syrians have been killed every day.

Are there lessons from the Syrian experience for countries like India, which is home to the world’s second-largest Muslim population?
I’m not specifically aware of community issues in India. But… harmony between different communities is key. Populism will not help. We should not allow communities to ghettoise. There should be greater interaction between religious communities to preserve a democracy.