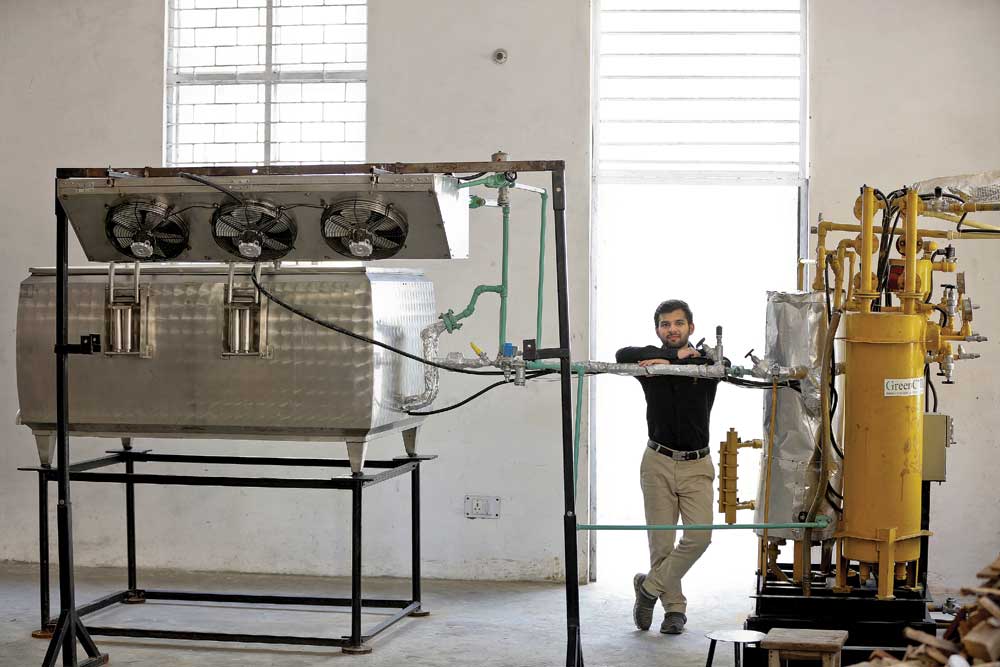 IT WAS THE winter of early 2014. Akash Agarwal had just reached Saharanpur, on his way from Delhi to see his grandparents, when he noticed milkmen with huge cans of milk standing on both sides of the road. It was late afternoon, and a curious Agarwal stopped his car to chat with them. “They were waiting for a pickup truck to take the milk to the nearest processing centre, which is 40-50 km away in Badaut,” says the 25-year-old. “There was no storage facility or cold storage nearby. If the pick-up didn’t happen for some reason, they would sell their milk at throwaway prices only because they couldn’t store it.”

Agarwal left for Delhi the next morning, but the idea of doing something to help the milkmen stuck with him. He discussed the idea with his father Anurag Agarwal, a mechanical engineer from IIT Kanpur. Together, they started researching how to develop small cold storages that would not be prohibitively costly. Today, their company New Leaf Dynamic is trying to transform not just the milk trade in the countryside with low-cost chilling units that run on farm waste, but a host of other farm-produce markets that have been stunted by gaps in the country’s farm-to-fork cold chain.

Right from his student days at Delhi Public School, Vasant Kunj, Akash was keen on starting something on his own rather than looking for a job. His father had worked for companies like Hero Motors and HCL Ltd before turning entrepreneur. “There was so much happening in India in the 90s and I had varied experience across the industry,” says the father. “I started developing software for companies and it worked well.” He would always encourage Akash to do something that could help those who lived in villages. At the end of his schooling in 2009, Agarwal headed to University of Utah in the US for a degree in Marketing and Sales. “My objective was to learn and study how new businesses are being developed across the globe and which are the industries that would flourish in the coming years,” he says. After two years, he decided to take a break from studies and came back to India to do some ground-level research and hunt for business ideas. “Mere education wouldn’t help [I knew],” he says, “I needed to have a clear idea of what I was going to do before taking my studies further.” He zeroed in on green technology. “It was just the early evolution phase of green technology and everyone was talking green,” he adds. “Given the changing environmental conditions, a robust idea in green technology would sustain [the planet] and help mankind.”

Agarwal returned to the US in 2012 to complete his higher studies but was back two years later raring to press again with a business of his own. The Saharanpur experience had set his mind whirring about the practical aspects of a green venture. Local conditions had to be met for any project to succeed. “I was sure that our product shouldn’t be dependent on electricity or generators, as it would be a challenge for small farmers to get constant power supply, and it’s not viable for them to use just any kind of fuel,” he says. “It must use farm waste as fuel.”

The next few months were spent on finding the right technology for such a chiller. The father-son duo travelled to countries such as Germany, China and Japan to see what was happening around in the world on this front. “The German technology [we saw] was closer to what we were trying to get, but it was not compatible with Indian conditions,” says the father. They came back to India and sifted through sheafs of research papers, trying to spot large-volume refrigeration systems that would gel with what they had in mind.

BY THE END of the year, the Agarwals had exactly what they were looking for. And by March 2015, New Leaf Dynamic had developed and launched its high-volume refrigeration units under the brand name GreenChill. The first product was its Off-Grid Bulk Milk Cooler, which could store 500-1,000 litres of milk. Next came the brand’s Off-Grid Cold Storage, with a storage capacity ranging from10 to 15 metric tonnes.

Our product is the most cost effective solution, with no damage to the environment

The company has set up a plant in Noida on a capital outlay of Rs 4 crore. “Currently, we are not manufacturing the products because of high machine and labour cost involved,” says Agarwal. “We are ordering different parts from some companies in Faridabad and the assembly takes place at the factory.”

Both products are priced in a range of Rs 14 lakh and Rs 20 lakh, depending on the storage capacity. “Also, there is a certain amount of customisation required for each installation, which increases the cost a little,” says Agarwal. “Our solutions need minimum space of 380 sq ft, which is the lowest for any kind of refrigeration system. You can call it a ‘mini cold storage’, especially meant for the use of farmers and milk producers.” The cold storage units can be used to store vegetables, fruits, seafood, grain, flowers or other horticultural products that need to stay in a temperature range of -5 to 20º Celsius—as the machines maintain. “If the system remains switched on for six to eight hours, then it can maintain the set temperature for 24 hours,” claims Agarwal. “At this rate, it is the most cost-effective solution, reducing operating costs by around 50 per cent and doing no damage to the environment.”

Since the products do not need the electricity grid, New Leaf Dynamic hopes to plug gaps in the country’s cold chain infrastructure in places where power supply is patchy. “India is the world’s largest milk producer and its second largest producer of fruits and vegetables, but roughly accounts for wastage worth Rs 44,000 crore annually,” laments the father. “One of the major causes of food loss and waste in low-income countries is mainly connected to financial, managerial and technical limitations in storage and cooling facilities in difficult climatic conditions.” He claims that the company’s product will not only save tonnes of produce, while doing the ecosystem a good turn, but also provide a sense of security to farmers who have no guarantee of how much they can earn from the perishables they produce.

When Agarwal was looking for energy options, a solar energy powered product had also come to mind. “But it was expensive and our solution offers more capacity at lower cost than solar,” he says. He recalls his excitement on securing the company’s first order. It was in August 2015. Surprisingly, though, it was not from a farmer or a milk producer, but an institution. They had been asked to make a pitch to the National Institute of Science and Technology, Berhampur, Odisha, which needed a chiller for its canteen. “The Institute used to purchase vegetables from the local mandi on a weekly basis and needed something to store and use it over the week,” says Agarwal. “Our first product was deployed at the canteen with a storage capacity of 10 tonnes, which runs on the waste generated daily in the canteen.”

The company has executed three other installations at different places across India. Agarwal expects demand to pick up once word gets around and is aiming for 30 installations by March 2017. However, it will be a while for the firm earns a profit. “For breaking even, we need to do 50 installations and I am aiming to achieve this by the end of 2017,” says Agarwal.

Meanwhile, New Leaf Dynamic has tied up with IIT Patna for further R&D. It has also signed an agreement with the Assam government to establish storage facilities for farm and fishery products at the district level in the state. The sales team is currently working in Gujarat, Haryana and UP, among other states, and will soon expand to Punjab. “The market potential is huge. We can offer these solutions to African countries later on,” says the senior Agarwal. “Going forward, we can also make air conditioners that would run on farm waste and that can be used in the manufacturing sector, real estate and what not. But right now, the idea is to create a market for the current products.”

Generating demand is tough, given rural India’s vast distances and the wide dispersal of the company’s target customer base. But these are early days yet, and Agarwal is convinced that the company’s offerings are the need of the hour. The satisfaction of existing customers also serves as encouragement. “Earlier, we were spending Rs 450 on ice slabs every day to store the remaining milk that wasn’t sold in the market from our dairy,” says Ami Chand, a milk producer from Saharanpur. “Now with GreenChill, we are not only able to store the milk at no cost, but are also able to supply fresh milk to the market the next day.” The government also offers farmers a subsidy to buy such products, which reduces the cost by almost half.

It is a huge country, however, and there is a lot to do. Agarwal has been going from one state to another to promote the idea. “It’s a phase which every new idea and business goes through,” he says. “I have the patience to wait for people to accept it.”