The Power of Diaspora Politics 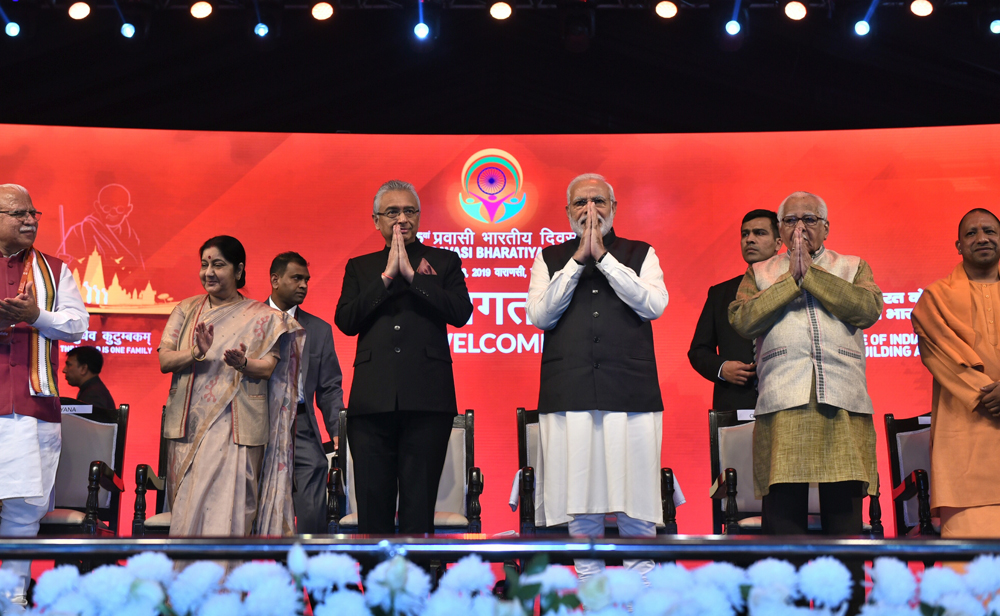 There are certain things you can be sure of the moment you set foot in Varanasi. For one, it’s not a city of deception. There is a sense of spontaneity, which adds magic to the mundane. Throbbing with life, its lanes and alleys speak of reverence, much like the legendary Kashi Vishwanath. The Benares pandas still play middlemen between God and mortals and in their mirthful ritual owe allegiance to none other than Mammon himself. The waning and waxing of the sacred and the profane in a 3,000-year-old civilisation makes Varanasi a contender in the universe of oneness. A ‘way of life’, if you will, to call on a motley collection of folks of Indian origin settled overseas, the Pravasi Bharatiyas, to mark what has come to be known as the Pravasi Bharatiya Divas (PBD).

It’s one of those early mornings in Godowlia, the commercial hub of the city. The locality has been spruced up for the PBD. Municipal workers are sweeping the road with brooms. At one corner of the street, people queue up for their traditional breakfast of deep fried puris, steaming sabzi and melt-in-the-mouth jalebis. Elsewhere, groups of people are gathering at a paan shop. Their conversation veers around politics and the upcoming General Election. They discuss with concern whether Prime Minister Narendra Modi would contest the next election from Varanasi or whether he will be elected the Prime Minister again. With Modi contesting the polls from Varanasi, it has a direct bearing on the city’s development. For one, the city was flushed with funds after he came to power in 2014 and was given a makeover. Arguably, the gathering at the paan shop seemed concerned whether Modi would indeed return.

At this juncture, a man walks down to the group of bystanders and announces, “It will rain tomorrow!” But it is bright and sunny. “Yes, yes, get ready for the rain, Modi is coming tomorrow,” says another member of the group. The Prime Minister was to be in Varanasi to address the 15th Pravasi Bharatiya Divas. Surprisingly, the prophetic words of the man came true as the city witnessed a light shower the day Modi landed in the city.

The scenario at Lalpur, a nondescript village, on the outskirts of Varanasi, which is also the venue of the PBD convention, is in complete contrast to Godowlia. With well-planned landscape, wide roads and modern architecture, the zone gives a glimpse of another world and has become a ‘local’ favourite. The venue, Deendayal Hastkala Sankul, houses a craft museum, an auditorium and a rash of handicraft emporiums. The locals proudly claim that Modi himself laid its foundation when he came to power and it was completed in record time for the occasion. The place is abuzz with Indian diaspora delegates flying into the city from different parts of the world.

Here, though the setting is different from the one at Godowlia, the tenor of the business and networking conversation invariably steers around Modi and the upcoming election. “Modi has energised the Indian diaspora. We want to contribute to India’s development but for politicians like Mayawati and Mamata Bannerjee, we have to give a second thought while investing in India,” says V Srinivasan from Virginia, the US, one of the delegates. Jayesh Trivedi from Mauritius, a globetrotting businessman, feels that Modi has added soft power to the country’s image. “He is known everywhere and as a result we are looked upon more favourably than in the past. We no longer face harassment at the immigration counters,” he says.

But among the diaspora, there is another group that feels that there is enough work to be done by the Modi Government. They believed that although the country has had political stability during the Modi regime, economic growth has been uneven. “While certain sectors have benefitted disproportionately, those like basic education, health, food industry and environment, have been neglected. India is a high-density country and if sensitive issues are not taken care of, there are chances that certain diseases, which have been eradicated now, may strike back with a vengeance,” says Anil Titus who runs a business in Bahrain and is well-informed about Indian politics.

A. Prakash, 32, a researcher based in New York whose father migrated to the US in 1997 is working on a book on nationality and the right-wing shift in the global politics. He says he belongs to the ‘ABCD’ (American Born Confused Desi) generation and was missing the peer group of his generation at the convention. “Most people who are here to attend the function are those who had migrated out of India between 1960 and 1980. They are BJP’s loyal supporters as they found new identity under the new dispensation. However, the children of NRIs are much different. They do not support right-wing nationalism and neither support Trump, nor Modi. They are progressive and supportive of liberal ideology.”

In the US, there is a sharp generational divide within the Indian community as Sanjoy Chakravorty, Devesh Kapur and Nirvikar Singh, in The Other One Percent points out. While the first-generation of Indian-Americans channelised their energies in building Indo-US relations, the preference of the second generation lies with US politics and dealing with their racial identity. The case of Tulsi Gabbard and Kamala Harris as presidential aspirants for the 2020 US election drives home the point. The influence of second-generation American-Indians are further going up, as some 300,000 youth will be hitting the age bracket of 25-45 years by 2030. They are not going to be only socially and economically powerful, but politically as well.

There is however a flip side to diaspora becoming too powerful in recent times. There are examples of backlashes from the country they live in. This is more so in countries whose borders have become permeable to migration and diaspora formation. Klaus Stierstorfer and Janet Wilson in The Routledge Diaspora Studies Reader, say that what were earlier outdated concepts of fixed belonging, ethnicity and nationhood have assumed new significance in the light of growing right-wing nationalism in the US and some of the European countries. The ideas of national sovereignty, economic protectionism and ‘authentic origin’, which are anathema to diaspora formation, have come to occupy centre stage in global politics.

At the convention though, a vast majority of the delegates swore by the BJP. After all, no other Indian political party has formed, cultivated and nurtured its systematic engagement with the Indian diaspora as well as the BJP. It was Atal Behari Vajpayee who in 2000 conceived and implemented the idea after a high-level committee report of LM Singhvi, and subsequently, the first PBD was inaugurated in Delhi in 2003. Modi has pursued the tradition more aggressively and has been able to create a global network of soft political support for the party across the globe. The huge turnover of the Indian diaspora at Wembley Stadium in London in 2015 and Madison Square, New York, in 2014 were signs of an emerging class of the politically conscious diaspora willing to engage with India, while retaining their roots overseas.

Although the diaspora is yet to be vested with voting rights, the non-resident Indians who can cast their votes, seldom exercise it being out of the country during elections. So, while they may not add votes to the party, they have engaged themselves in fund collection, running virtual campaigns through social media and lobbying for political parties, especially in the US, the UK, Australia and Canada. Aam Admi Party has been a major beneficiary to this emerging trend as 30 per cent of its funds were collected overseas during the previous Delhi Assembly election. To add moral support to the party in the Punjab Assembly election, Indian immigrants from Canada had hired a chartered plane, which flew in the Sikh diaspora to campaign for the party in the Punjab Assembly election.

No such practice however has been observed either in the BJP or the Congress parties despite the BJP having an ‘Overseas Friends’ in its cell, which is active in enlarging its support base abroad. During the Punjab Assembly election, the Canadian president of the Overseas Friends of BJP, Azad Kaushik, had said that they had no plan of sending volunteers to India to campaign for the party as it was not a political party. However, sending volunteers on a personal basis can’t be ruled out in future given the charged political atmosphere in the country.

Kanwaljit Singh Bakshi, a member of New Zealand parliament and a speaker at the inaugural PBD 2019 event, suggested granting dual citizenship to the members of the Indian diaspora to allow them to play a more active role in Indian politics. Many countries like Australia, Belgium, and Canada allow for dual citizenship but India has been walking a tight rope. The country has scuttled any discussion in this direction for fear for external influence and interference in its electoral process. Nevertheless, the clamour for dual citizenship among the Indian diaspora has been gathering steam. “India should consider granting dual citizenship and voting rights to its diaspora as it will help in improving its political governance by way of adding new perspective, progressive ideas and new voices,” says Rupesh Shrivastava, an IT engineer who has now acquired US citizenship.

Saurabh Katiyal who migrated to Thailand in 2008 and is now running a successful business there says, “India should energise its diaspora for politics. They [Indian diaspora] are deprived and alienated and suffer from ‘guilt’ for not doing enough for their home country. The government should channelise their ‘guilt’ in the right direction for the good of the country.” Trance Naidu, who is a third-generation immigrant in Malaysia, feels that the Indian diaspora, a minority community in the country of his residence, should be allowed to participate in their homeland politics lest they are further alienated. Rajiv Mehta, who migrated to Singapore in 1997, says Indian expatriates should have a say in their country’s politics. It will further strengthen the fabric of Indian democracy. They already wield enough power as they influence their families, friends and relatives in voting choices directly or indirectly,” he quips.

However, the 31.2 million-strong Indian diaspora have a long way to go as far as dual citizenship is concerned. A Bill granting proxy voting rights to NRIs is still pending in the Rajya Sabha and doesn’t seem to be moving anywhere before a determined effort is made after the 2019 General Election. Simply put, the NRIs have to wait it out till the 2024 General Election.

Apart from politics, the growing economic power of the Indian diaspora which remits home a whopping $69 billion (2017) is yet another reason why political parties are backing them for funding the electoral process. Although remittances are largely individualistic and consumption-driven, their role in politics is set to increase with political parties establishing cells overseas giving an impetus to fund collection.