Swami Aseemanand: Myth of the Monk Who Preached Terror 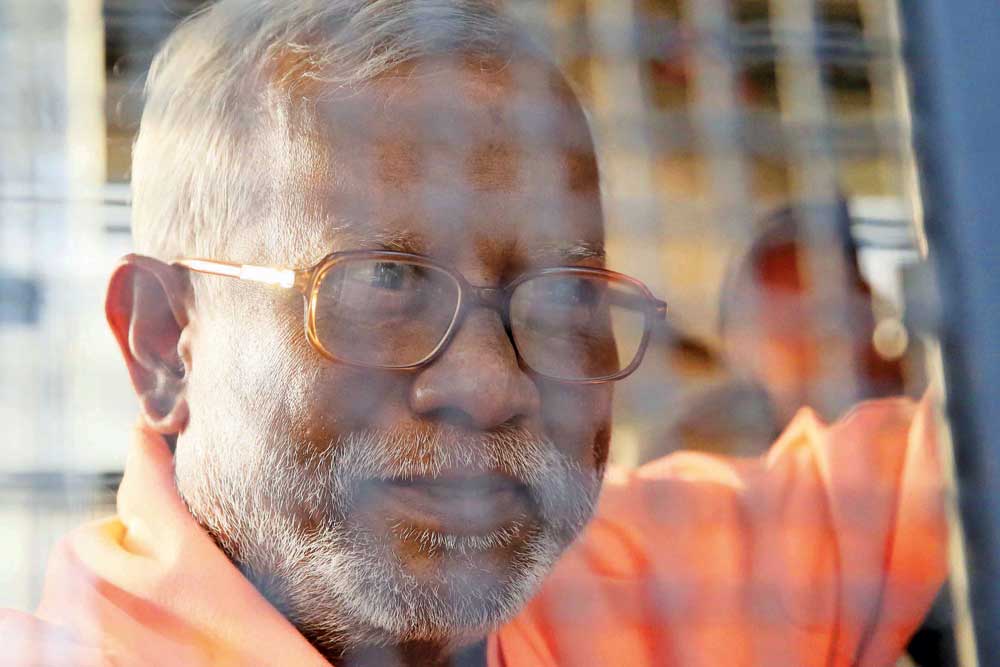 SWAMI ASEEMANAND, Bengali by birth and a resident of Gujarat, was a name familiar to Christian missionaries ever since he launched a movement against conversion in the tribal belt of Gujarat. Originally from Hooghly district, he made the western state his base in late 1990 for a reconversion drive in Dang district to bring Tribals back into the Hindu fold. This district is one among many along a long stretch from Gujarat to Odisha in the east that are populated largely by Tribals.

Several missionary organisations allegedly had a free run in that tribal belt whilst the UPA was in power at the Centre. It was also during the Congress-led coalition’s tenure that the saffron- clad Swami was charged with being among the masterminds of three different bomb blasts in 2007: the Samjhauta Express explosion of February which took the lives of 68 people; the Mecca Masjid one in May; and the Ajmer Sharif blast in October.

Aseemanand was arrested in Haridwar, Uttarakhand, by the CBI on November 19th, 2010, in connection with the Mecca Masjid attack that had killed eight people in Hyderabad during Friday prayers on May 18th three years earlier; five more people were killed in police firing on the crowd outside the mosque, bringing the total dead to 13. The prosecution claimed that he had ‘confessed’ to plotting the explosions at mosques along with like- minded accomplices (he later said that he was forced into making that confession, and withdrew it). India’s Home Minister under the UPA, P Chidambaram, had coined the term ‘saffron terror’ back then to describe the bombings. Presenting this as a clear and present danger to India, the Government of the day had sought to equate it with the threat of Islamist terror, suggesting those of Hindutva conviction had also begun to plan and execute acts of terror.

On April 16th, Ravinder Reddy, a special court judge in Hyderabad, delivered the verdict of the trial, saying the National Investigation Agency (NIA) had failed to prove the charges against the accused. No single charge that the prosecution had levelled against Aseemanand could be proved, said the judge, pronouncing him ‘not guilty’ of any role in the Mecca Masjid case. Hours after his verdict, Justuce Reddy resigned from his post, though the High Court rejected his resignation. In one fell stroke, the judgment crushed the false equivalence drawn by the Congress and its allies between extremists of India’s two largest faiths. Aseemanand’s acquittal, along with that of four others, has dealt a blow to the politically-motivated ‘saffron terror’ theory.

The court’s clearing Aseemanand and his alleged accomplices of all charges has come as an embarrassment to those leftists and civil rights activists who celebrated each let-off of a jihadi terror accused as the victory of an independent judiciary and even as evidence of a communal police force and investigative agencies that they claimed was trying to frame innocent Muslim youth as part of a vast right-wing conspiracy. Many of those acquittals were on account of a poorly prepared prosecution that was unable to prove the guilt of the accused beyond reasonable doubt. Ironically, conspiracy theorists would allege foul play even when the same courts convicted the likes of Afzal Guru and Yaqub Memon.

This was second case against Aseemanand in which he has been acquitted, the first being the Ajmer Sharif blast. His arrest had come in handy for those who raged against ‘saffron terror’.

On April 16th, when special court judge Ravinder Reddy delivered the ‘not guilty’ verdict, he said no single charge that the prosecution had levelled against Aseemanand could be proved

The verdict comes as a huge embarrassment to some top Congress leaders. Digvijaya Singh had gone to the extent of alluding to the killing of Hemant Karkare, the police officer martyred during the 26/11 Mumbai attacks of 2008, as an assassination by hitmen ordered to thwart his probe of a ‘Hindu terror’ module. Singh’s tale unravelled thanks to the bravery of a Mumbai constable called Tukaram Omble, who sacrificed his life for his colleagues to apprehend Ajmal Kasab, a terrorist whose testimony made the Pakistani plot clear. However, taking a cue from his senior party leader, even Rahul Gandhi, now president of the Congress, expended much energy echoing Singh’s specious supposition. In cabled reports of conversations that WikiLeaks made public, Gandhi spoke of the ‘threat from Hindu terror’ with top US diplomats in Delhi. In July 2009, he had told Ambassador Timothy Roemer at a luncheon hosted by Prime Minister Manmohan Singh that “radicalised Hindu groups might be a bigger threat than the local support to terrorist groups like the Lashkar-e-Toiba”.

LAST YEAR, A Jaipur court acquitted Aseemanand and six others in the Ajmer blast case at the shrine of the Sufi saint Moinuddin Chishti. Three other accused were convicted for the blast, but not Aseemanand. Out on bail in the Samjhauta case, the trial for which was still underway, he was given the lead role in the ‘Hindu terror’ drama. This was exposed by the observations made by special NIA judge Dinesh Gupta in the Ajmer Sharif case. Justice Gupta raised questions over why Aseemanand was produced in the capital in the first instance, although the Ajmer blast case was registered in Hyderabad, where a city court was examining Aseemanand’s statements since his arrest. In his judgment, Justice Gupta asked why the Delhi magistrate before whom he was first produced did not note down any reason given by the Investigating Officer for why the accused was taken to the national capital and had his ‘confession’ recorded there. At the time, Aseemanand was in Mumbai with the Investigating Officer, and could easily have been taken to Hyderabad to record his statement. Yet, he was inexplicably transported to Delhi and produced before a magistrate on December 16th, 2010, where he reportedly confessed to the crime and expressed repentance.

No confession by Aseemanand was recorded in the Ajmer case and so the prosecution had to rely on what he had said in the Mecca Masjid case. Both cases were related, according to the public prosecutors, who claimed that one of the many SIM cards used to plan the Ajmer attack also featured in the Hyderabad plot, and that this established Aseemanand’s complicity in both cases. Since his ‘confession’ was recorded by a judicial magistrate in Delhi, they argued that it was both legally valid and credible. Once he retracted it, saying it had been made under duress, the case against him came apart.

In their bid to get him convicted, the authorities made one bungle after another. Aseemanand’s CBI custody, for instance, was to expire on December 18th, 2010, and he was to have been produced before a judge in Hyderabad on that day. But, suspiciously, he was shifted to Delhi just three days before that and sent to judicial custody until December 18th. To explain its action, the CBI had to send a fax to the Hyderabad court on December 18th seeking an extension of his remand for two days. Taking note of all this, the judge remarked that the Bureau could have saved itself embarrassment had it taken him to Hyderabad from Mumbai, instead of rushing him to Delhi.

THERE ARE OTHER signs that the CBI under the UPA had tried to twist a case against Aseemanand for the Ajmer attack to suit a sordid agenda. The Bureau’s Investigating Officer had deposed before the special court hearing the case that Aseemanand wanted to repent and had said so in a written statement. But this document was not part of the application presented in court by the officer; nor was it signed by the accused. The absence of a signed confessional statement made a mockery of the Bureau’s case against him.

After his arrest in November 2010, Aseemanand was taken to Hyderabad to appear before a magistrate there. Initially, he was sent to judicial custody, but the magistrate on November 27th granted the CBI his custody for interrogation and verification of facts. The court had at the time made it clear that when the Investigating Officer interrogates Aseemanand, the latter’s lawyer had to be present. Although this was ordered by a judicial magistrate, no lawyer was provided to him, though legal aid services exist for exactly this.

There were plenty of other gaping holes in the so-called confession story as well. The special court judge pointed out that in Aseemanand’s deposition, when he was asked why he wanted to confess, he had supposedly said that a Muslim youth called Abdul Kaleem, also accused in the blast case, had looked after him so well in Chanchalguda Jail that he was overcome with contrition. But upon enquiry, the court found that no Kaleem was arrested in the Mecca Masjid case. Also, Aseemanand was kept in isolation under strict security, given a possible threat to his life. During his stint in prison, he was allowed out only for 10 minutes at a time, and that too with no contact permitted with any other prisoner.

During the trial, the judge frequently pointed out gaps in the prosecution’s argument. According to one official in the know, it appeared as if almost everyone except the CBI knew that Swami Aseemanand would walk out a free man.