Kashmir: The Price of Soft Secessionism

The current political experiment in the Valley has failed badly 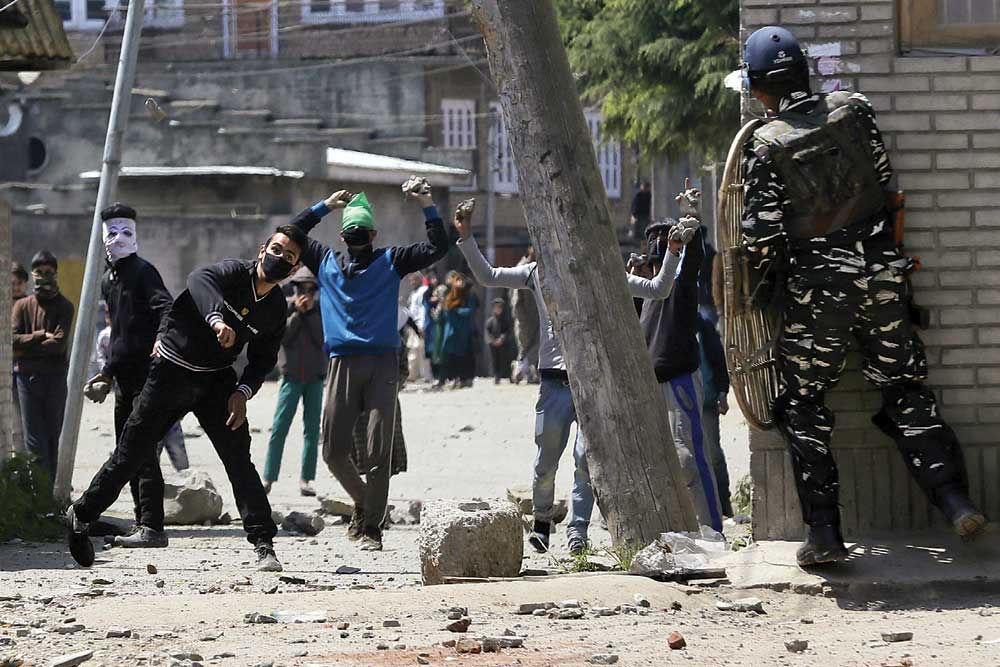 IF YOU DID not know much about Kashmir and were shown a video clip that has surfaced recently—of a few paramilitary soldiers being teased and kicked and hit by a few unruly youth, while some record this on their mobile phones— you’d think that India has withdrawn its forces from Kashmir and Indian soldiers do not want to engage with men whose shouts of ‘Go India Go Back’ they’ve acceded to. India is not going anywhere because Kashmir is India. But it is really a disgrace what we are asking our soldiers to endure for the sake of an electoral process that has in any case failed because the state has failed to protect its interests. Showing restraint in the face of provocation is one thing, but not being able to act when a man is kicking you or hitting your head with brute force is a shame that no sovereign nation allows its soldiers to go through. Imagine where that video clip has travelled, across Kashmir and outside, and what message it conveys.

Had someone asked the soldier why he took the blows silently, he would have said, ‘Upar se order hai (it’s an order from above).’ Above, of course, is the BJP-run government in Delhi, which in its greed to be in power in Jammu & Kashmir does not seem to care about the fact that the humiliation of a soldier is the humiliation of the state—a conclusion that Pakistan sympathisers and those who advocate Islamist caliphate in Kashmir take no time to draw.

But does it make sense to retain such hangnail political power in Kashmir? The voter turnout for the Srinagar parliamentary seat, an election held on April 9th, was an abysmal 7 per cent. This is a stark fall from 2014, when Srinagar registered a figure of 26 per cent. There were rallies all over, including several by BJP supporters. But in 2017, even for areas like Budgam district (part of Srinagar constituency), which had remained trouble-free since the mid 90s and has recorded a much higher voting percentage, the turnout this time has been poor. Dozens of clashes took place, leaving eight persons dead. The results have emboldened separatists so much that they have now asked people to gather in Budgam on April 14th for demonstrations. The situation is grim. The Centre has quietly acknowledged this by postponing polling for the Anantnag parliamentary constituency, scheduled for April 12th. The ruling party’s candidate himself made an appeal to put off the election till later.

The poor turnout, as many would like to tell you, is not a vote against the state’s BJP-PDP government. If that were the case, people would have come out to vote for the National Conference. Its Srinagar candidate, Farooq Abdullah, tried his best to sound as the biggest separatist in Kashmir by saying that Kashmiri youth were pelting stones “for nation” and that they were “sacrificing their lives” for a Kashmir resolution. That is just opportunism that New Delhi has encouraged for several decades, a part of the disastrous impression at the Centre that nobody can function in Kashmir’s politics without sounding anti-Indian.

The truth is that there is a complete law-and-order breakdown in several parts in Kashmir, especially the southern region. The situation has gotten so bad for the first time since the peak of militancy in the early 90s. There is an atmosphere of fear and intimidation, which has forced many people to stay indoors on polling day. Participating in the electoral process could have consequences that include having one’s property burnt or even life taken. The miasma of azaadi is also gone. It was a veneer that has now worn off. Young militants have made it clear that their fight in Kashmir is not for an independent state, but for establishing Islamic rule.

It is not as if many Kashmiris cannot see how that goal will alter their lives. They want to reject it. But they have no sense of protection. Over the years, they have seen various governments embrace the staunchest of separatists and pro-Pakistan elements in Kashmir. In current times, even police officers have become targets of mob ire. Many of their houses have been burnt and several officers have not even been back home for months, fearing reprisals from angry mobs or militants. In such a scenario, it would be illogical to expect ordinary people to ignore threats to their lives and come out to vote.

Compare this with the 60s. In 1965, a Kashmiri Gujjar spotted a group of armed men near a meadow in north Kashmir where he had gone to graze his cattle. Mohammed Din Jagir, a resident of Tangmarg, was asked by these men to help them get into the town; they wanted him to arrange Kashmiri clothing for them so that they could enter without arousing suspicion. But instead of doing that, Jagir informed the police.

The information turned out to be crucial; the armed men had infiltrated the state from Pakistan to launch Operation Gibraltar, a secret Pakistani mission to annex Kashmir. It ended up in failure, thanks in part to Kashmiris like Jagir who reported their activities to the authorities, enabling India to foil Pakistan’s designs. The Centre announced a Padma Shri for Jagir and the then Prime Minister Indira Gandhi is believed to have personally asked him if she could do something for him. Jagir asked for two things: a Philips transistor and intervention with the father of a woman he wanted to marry but had been turned down. The transistor was gifted to him on the day he received his Padma Shri along with the likes of the scientist Satish Dhawan and the artist MF Husain. Later, a junior administrative officer was sent to his village who convinced the woman’s father to get his daughter married to Jagir.

In 1965, a handful of people in Kashmir may have thought of Jagir as a traitor, but nobody harmed him or burnt down his house. In 1990, after militancy broke out in Indian’s northern-most state, Jagir was killed by terrorists like so many other pro-Indian individuals there. Today, were someone like Jagir to spot any suspicious activity in the state, he would just turn away. This is because New Delhi’s failures have meant there is no stake for anyone in Kashmir whose heart may lie with India, out of patriotism or practicality.

The situation in 2017 is a result of what the Kashmiri journalist Ahmed Ali Fayyaz calls ‘Delhi’s licensed separatism’ in Kashmir. In its bid to create ‘assets’, the Indian security grid has created a monster that refuses to die. Even now, some like former IB chief AS Dulat are advocating that India needs to initiate a dialogue with the separatist leader Mirwaiz Umar Farooq. Meanwhile, the Mirwaiz is tweeting that ‘this [low voter turnout] is a clear ideological, political and moral victory’ for the people of Kashmir.

IT IS THIS murky approach to secessionism which has resulted in the mess Kashmir is in today. The Home Ministry should understand once for all that engaging with anyone from the Hurriyat is a waste of time. The Hurriyat is a part of the problem and its foremost agenda is to keep Kashmir burning so that its leaders remain relevant and fatten themselves on money pouring in from both Indian and Pakistani agencies. It is this bad call over Kashmir that has got the likes of Syed Salahuddin and his Pakistani handlers laughing at us. Which government facilitates the transfer of the son of its most-wanted terrorist from a medical college in Jammu to Srinagar and then creates conditions for him to practice as a doctor in a government-run medical institute? There is another separatist leader who has reportedly been paid money by intelligence agencies because he has promised them that when a plebiscite happens in Kashmir, he will ask his supporters to vote for India.

There is an understanding within the RSS that the BJP needs to create an alternative to both the NC and PDP, parties that engage in competitive secessionism whenever it suits them. That will take time and will not become possible till a clear message is sent to Kashmiris that their future lies with the rest of India and that no fissiparous tendencies will be encouraged. Perhaps New Delhi should begin with an acknowledgement that the current political experiment has failed and that Jammu & Kashmir should be placed under President’s Rule for the time being.