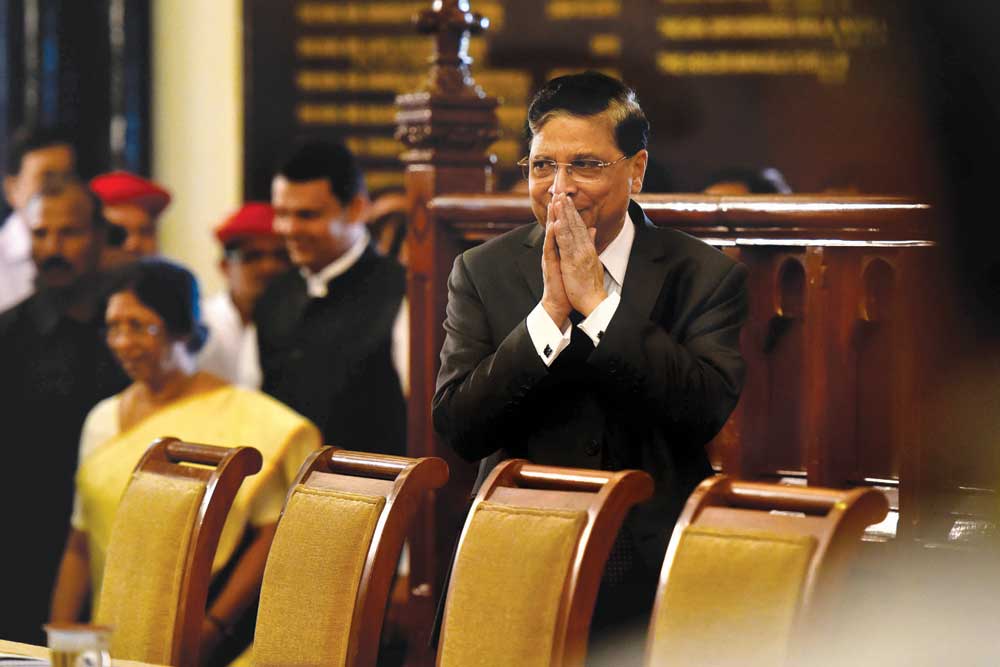 AS CHIEF JUSTICE of India, Dipak Misra is a person of quiet demeanour who says little outside the four walls of the institution he heads. That reticence, however, has not prevented his name from being dragged into unseemly controversies since he took his position as the head of India’s Judiciary.

In mid-January this year, four senior colleagues of his expressed their anguish, among other things, over the manner in which the Chief Justice of India (CJI) was allegedly allocating cases “selectively” to judges. “Sensitive” cases, it was alleged, were being handed to benches, bypassing established norms on the process. If that unprecedented press conference was not enough—judges of the Supreme Court never express opinions on matters of the house in other fora—a letter on the issues raised by the four judges went public. It was perhaps the first time that India’s higher judiciary found itself in the eye of a storm.

Less than a fortnight later, Sitaram Yechury of the CPM raised the spectre of impeaching the Chief Justice. On January 23rd, just days before the Budget Session of Parliament commenced, he said, “The independence and integrity of the judiciary are non- negotiable. As far as the legislature is concerned, the only option open to Parliament is to tackle this through an impeachment motion. The point is to set the system right. If inadequacies are found, it is incumbent on the legislature and the executive to address them in the interest of democracy and the nation.”

In the months since, there has been speculation on the motion to impeach Justice Misra. The move is reckless for many reasons. For one, except for some vague reference to the matters raised by the four senior judges, no substantial charge of ‘misbehaviour or incapacity’, the only grounds on which a judge can be removed, has been levelled or discussed on public record. There have been impeachment cases in the past, but all have involved allegations of corruption or some other serious issue. In one case, that of Soumitra Sen of Calcutta High Court, the charges were upheld by a Parliament-appointed committee. But the judge resigned before he was forced out. In any case, proving misbehaviour is an extremely difficult task, more so in case of a judge whose only fault—if one can say that—has been to earn the disfavour of some politicians.

But away from the noise and headlines lies another factor: it is not easy to impeach judges of the higher judiciary. The Constitution has very demanding requirements to oust a judge. A double majority is required in each House of Parliament for an impeachment motion to succeed. But even before such a motion is rolled out, the procedure laid down under the Judges (Inquiry) Act of 1968 prescribes a formal inquiry into allegations of ‘proved misbehaviour or incapacity’ made against the judge in question. To cap it all, voting on the motion has to take place during the same session that it is moved. These onerous conditions are aimed at securing the independence of judges from political whims.

SO FAR, THERE are only press reports that suggest an effort to impeach the Chief Justice of India. Even within the opposition Congress, there are voices that have cautioned against doing anything rash. The party’s former Law and Justice Minister M Veerappa Moily had cautioned against such action in January when the original scheme was hatched by Yechury. Then, there are other opposition parties such as the TMC, DMK and the BJD which have expressed reservations against any precipitate step. This is especially notable in the case of the TMC, which is otherwise known for its eagerness to oppose the Narendra Modi Government. If anything, it places India’s regional parties—often considered myopic in their pursuit of political ends—in positive light.

The plan to impeach Justice Misra must be seen in the context of political currents in India today. The link between goals and political activity has broken down, reminiscent of the situation that prevailed in the 1970s and 80s. To give another example, consider the fate of the no-confidence motion against the Modi Government that was moved by the TDP. This motion was moved after the Government cited its inability to grant Special Category status to that party’s home state of Andhra Pradesh. In the weeks since the TDP’s notice, the Lok Sabha has scarcely seen order even for a day, which is held as an explanation for Speaker Sumitra Mahajan not taking it up. It makes for a strange spectacle to behold: a group of opposition parties are in favour of a debate followed by a vote of confidence, but another set—the AIADMK among them, notably—has not allowed Parliament to proceed. The AIADMK says it wants the Cauvery issue to be taken up.

Instead of attempting better coordination among opposition parties, the TDP claims that the ‘scuttling’ of its motion could set a precedent that would threaten any such move in the future by a fragile government trying to prolong its survival. In reality, it is a simple matter of the opposition thrashing out a viable course of action. All parties know the possibility of the BJP-led NDA losing a vote of confidence in the current Lok Sabha is remote. Hence, a strategy of noise over action serves their purpose. The message that is sought to be conveyed is that the Government does not want to face a test of support in Parliament.

Something similar is at hand with the plan to impeach Justice Misra. Even if an adequate number of MPs sign the move to initiate the proceedings, it is well known that the Chairperson of the Rajya Sabha can reject such a motion. Section 3 of the Judges Enquiry Act, 1968, is clear on this score: the power of the Chairperson of the Upper House (or of the Speaker of the Lok Sabha in case the motion is moved in that House) is absolute in this regard and has no riders attached.

Alarmingly, there are speculative reports suggesting that in case the Vice-President rejects the motion, political parties behind the impeachment plan may move the Supreme Court against him. This would be an unprecedented and extremely damaging step from an institutional perspective. Imagine that the move to impeach a sitting Chief Justice of India has been rejected and then a plea against him lands in the very court he leads. Not only would this be an attempt to pit a judge against a judge, it would threaten the integrity of an independent institution that’s vital to the working of democracy in India.

Much of the politics around the impeachment plan has to do with Justice Misra’s attempt to craft a working relationship with the Government. In October 2015, after a Constitutional amendment that led to the creation of the National Judicial Appointments Commission was struck down by the Supreme Court, relations between the Executive and the Judiciary became frosty. The tenure of Chief Justice of India JS Khehar passed in formalising a Memorandum of Procedure (MoP) to appoint judges. The back-and-forth between the Government and the Judiciary on the MoP finally came to an end with the decisive intervention of Justice Khehar’s successor, Justice Misra. A section of ‘activist’ lawyers, however, tried to exploit a controversy that broke out over the RP Luthra case—which the Chief Justice had recalled from a particular bench. What was essentially an in-house issue of the Judiciary was sought to be used for political ends.

An independent judiciary has served India well and has been essential for the country’s democratic vitality. Cases of malfeasance and misdemeanours on the part of ministers and high functionaries have often been handled carefully by the top courts. The examples of arbitrary allocation of natural resources like coal and corruption in spectrum allotment, among other cases, speak amply of the higher judiciary’s role in India. But there have been instances of judicial overreach as well. Justice Misra is a rare judge who understands that independence does not necessarily mean confrontation. Wild speculation about the Chief Justice of India being disposed ‘favourably’ to the Government has continued unabated since the press conference held by the four senior judges. Never mind that the issue has not been raised publicly by them again. The real problem is different: there is now an active constituency of lawyers who have expanded a ‘rights jurisprudence’ of sorts that they think depends on the Judiciary and the Executive being in a permanent state of opposition to each other. This comes close to activist politics that succeeds by bypassing established ways of doing political activity, through elected representation in legislative bodies. If the Supreme Court, led by a Chief Justice who understands the dangers of sustained friction between the courts and the Government, tries to find a way out, it goes against the grain of what these lawyers seek.

This has not prevented political mischief by a few political parties. With the Budget Session coming to a close on April 6th, those parties are out of time. But the rashness with which a blatantly political agenda has been disguised as an effort to ‘save’ the Judiciary will be remembered for a long time.