With the J&K Assembly dissolved, it is perilous to ignore lessons of the past 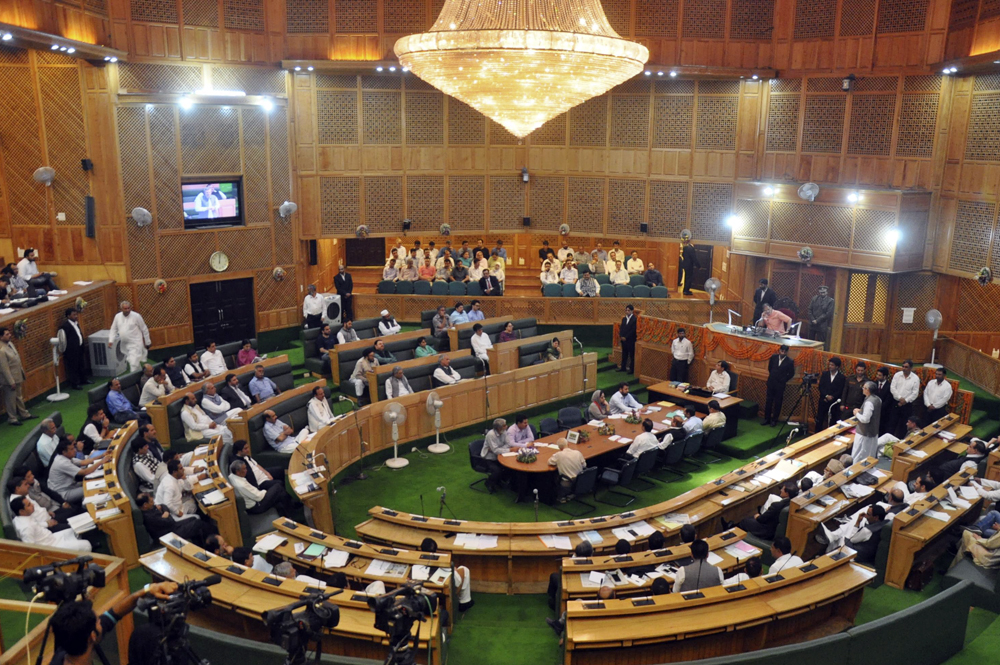 The hurried dissolution of the Jammu and Kashmir Assembly was a bit like sweeping away the queens, knights, castles and most of the pawns from a chessboard after just the first few moves of an intense round of chess. It has severely limited the Centre’s options. It will cause early elections, which nobody except the National Conference wants. Elections will create another security challenge, which few sensible folk want.

Yet, that sudden, untidy sweep across the chessboard happened. It was done to prevent the formation of a government of three secular parties—which was even farther from New Delhi’s carefully laid out game–plan than fresh elections. Some of those who call the shots at the Centre intended that Governor’s rule would last for a few more months, and a government led by their favourite would then be installed for the rest of the Assembly’s term.

Why wasn’t such a government installed already during the first five months of Governor’s Rule, one might ask. Well, that was only part two of the plan. Part one is that Governor’s Rule be utilised to clean up the system, give responsive administration, and end corruption.

Given the extent to which the system has been twisted out of shape in this state, that is a tall order. Ill-timed too, given the security challenge. It is also an invitation for the Leviathan of the state’s administrative system to strike back—quite likely, in deviously unexpected ways. For, even twisted out of shape, the system is well-entrenched. One may even argue that it goes back (with gaps over this long stretch of time) to the days of Rajatarangani more than a millennium ago.

But the plan was not shaped with an eye on such cultural and historical facts. Nor did phase two—installation of a new government—consider the streams of political affiliation in Kashmir. The National Conference draws its core strength from memories of land reforms, and the jobs the party has disbursed while in government. And it represents the politics of Kashmiri autonomy. Mufti Sayeed, on the other hand, put together a coalition-within-a-party of various other streams of Kashmiri politics, including the support base of the Jamaat-e-Islami, several former leading lights of Abdul Ghani Lone’s People’s Conference in north Kashmir, the Shia support base of Iftekhar Ansari, and what remains of the party Mohiuddin Kara formed in 1953 in Srinagar’s Batmaloo.

Talking of ending ‘dynastic politics’ by backing Lone’s son Sajad, and Ansari’s son Imran, makes no logical sense. Worse, it treats all Kashmir-based parties simplistically as just that, Kashmir-based, ignoring the social, ethnic and locality-based political affiliations of each party within Kashmir. That’s like treating backers of the Nationalist Congress Party and the Shiv Sena as interchangeable since they are based in the same state—or the Samajwadi Party and the Bahujan Samaj Party!

The dissolution brings another set of dark players on board—terror operators who might seek to disrupt elections. By law, a new assembly ought to be elected as early as possible, but it has not even been possible to hold a by-election for the Anantnag seat in the Lok Sabha—such is the disturbed security scenario. That seat fell vacant after Mehbooba Mufti took over as Chief Minister in April 2016.

To be sure, elections for municipalities have been held, and panchayats are being elected right now. But, on the ground in many places, these have been a sorry apology for grassroots empowerment. Not only was the turnout very low for most municipal contests, almost no municipal candidate was known to prospective voters; most kept their identities secret, and did not campaign at all. Several were elected by the votes of a part of their immediate family, with less than ten votes cast in total. There were no candidates at all in a number of towns. In others, several candidates were elected unopposed. The social standing of some of those who did stand is another story; the less said the better.

Providing security to conduct assembly elections will be a challenge of a different order. While the coordinators of insurgency did not try to disrupt the grassroots elections much, they might have a more trenchant attitude to assembly polls.

From the Centre’s viewpoint, conducting assembly elections before the Lok Sabha polls next April would entail two sorts of political risk. One, the outcome may bring an NC-led government to power, perhaps supported by the Congress—possible the PDP too, in a repeat of the sort of tri-party alliance that was planned last fortnight. The BJP would not like the political message that sort of outcome could send in the run-up to national general elections.

Two, a major terror attack, or an extremely low turnout, could tarnish the image of the BJP government at the Centre. Since it prides itself on robust security stances, a security setback during elections in Kashmir could dent its image in the run-up to the crucial Lok Sabha polls. There is a good logistical reason too for waiting till after the Lok Sabha elections: many of the large numbers of paramilitary security personnel who provide security for the Lok Sabha polls can be redeployed to Kashmir.

Although the security forces have had a string of major militant kills, more boys continue to go underground in south Kashmir. This flow of new recruits continued last month even after the three or four remaining leading lights of militancy stopped calling for fresh recruits—their morale having dipped after Mannan Wani, the PhD scholar at Aligarh who became a militant, was killed.

The continued flow of fresh militants in south Kashmir, combined with the large number of foreign militants lurking in north Kashmir, does not augur well.

This dramatic dissolution is also unfortunate for its impact on the credibility of the Indian constitutional system. Governor Satya Pal Malik has publicly defended his decision as even-handed, calculated to prevent horse-trading. But a claim from three parties with established numbers cannot be called horse-trading, bracketed along with a claim based on the presumed support of groups of dissidents—of which only one group of five or six MLAs of the PDP is known.

The key fact is that Lone’s claim was based on the support of the 25 MLAs of the ruling party at the Centre. While trying to defend his action, Malik candidly revealed last week that the BJP government at the Centre had asked him to install Lone as the chief minister that dramatic evening when he dissolved the House instead. He retracted that assertion soon after, but that was like trying to get a launched missile back into its silo.

The question mark that now hangs over the transparency and fairness of the constitutional system is particularly dangerous in a place like Kashmir, where anti-India forces have argued even at the best of times that the system is biased, manipulative and repressive. The argument has stretched in recent years: many radical youth now reject not just particular rounds of elections as rigged, but the entire system of democracy as a fraud. Many young Kashmiris have bought into radical Islamist arguments which hold that the entire concept of a nation-state is tainted. In this context, it is even more important to uphold the credibility of democratic institutions and the rule of law.

Former Chief Minister Mehbooba Mufti has alleged that central investigative agencies, such as the NIA, tried to coerce MLAs to support the claim built around BJP MLAs. One MLA is said to have been given a weird but stark choice: two years in jail, or two years as a minister. But the BJP’s top leadership is said to have told Mufti that they had not authorised any such moves.

This sort of sordid tactic could nevertheless remind Kashmiris of the sort of moves that some Kashmiri leaders, including Sheikh Abdullah, have used in the past. A police officer delivered the same sort of message to one of his senior party colleagues—join the ministry, or go to jail. At that time, such tactics were wrongly attributed to the Centre. Now they will be credibly attributed. If it happened, and without the knowledge of those in charge at the top, it is a sad commentary on their grip over things.

This dissolution will be unfavourably compared with earlier dissolutions of the state assembly. The J&K House was first dissolved in March 1977 by the then governor, LK Jha, a year before its prescribed six-year term would have ended. The Congress government in New Delhi, which was on its last legs following the Emergency, had wanted to install a Congress government in the state—led, ironically, by Mufti Mohammed Sayeed.

Jha—a veteran bureaucrat like the recent governor, NN Vohra—has been acclaimed as a bold and independent man who upheld the spirit of the Constitution. Although Abdullah headed a lame-duck government after the Congress had withdrawn support, Jha accepted his advice to dissolve the assembly and call for fresh elections. He was vindicated when Abdullah won a resounding victory in the elections that were held in July that year.

The assembly was dissolved again in 1986. The Centre had sent Mr Jagmohan to the state two years before to implement a palace coup for which his predecessor, BK Nehru, was unwilling. The post-coup government was unstable from the start. So the Centre got him to install an NC-Congress coalition in 1986 and call for fresh elections. A group of Islamist and other parties unexpectedly came together at the beginning of 1987 to contest those elections as the Muslim United Front. The People’s Conference founded by Abdul Ghani Lone was a constituent. Adding irony to turbulence, the Election Commission fixed polling for March 23rd, which is Pakistan Day. The ham-handed rigging of those elections led to even greater turmoil.

What happened between 1984 and 1987 ought to be a severe lesson on the perils of trying to manipulate politics in Kashmir.

Jagmohan returned as governor in January 1990. He dissolved the assembly about a month after the state government led by Farooq Abdullah had resigned on January 18th. He did so without consulting Prime Minister VP Singh, who was so livid that he wanted to sack Jagmohan. Ironically, it was Mufti Sayeed—along with another cabinet minister, Arun Nehru—who persuaded Singh to let Jagmohan stay. Jagmohan may even have had their covert approval for the dissolution, for Mufti’s ambition, even while he was the Home Minister of India, was to become the chief minister of the state.

It is the aftermath of that dissolution that bears an ominous lesson for the current situation: it led to more than six years of Governor’s Rule and President’s Rule. The Constitution had to be repeatedly amended to allow those extensions, until elections were finally held in 1996. The uprising that had reached feverish proportions in the couple of months before the 1990 dissolution led to widespread militancy, and then proxy war. The Valley’s three seats in the Lok Sabha elected in 1991 were never filled—just as the Anantnag seat in the current Lok Sabha remains vacant after the by-election which was due on April 12th, 2017 had to be postponed owing to massive unrest during the by-election for the Srinagar seat three days earlier. The Lok Sabha elections at the end of 1989 had already had an abysmal turnout—just like many of the municipal elections recently held in the Valley.

While the forces’ recent successes give cause for hope, it is foolish to ignore these lessons of the past.