The Sleeping Giant of Tumkur and the Missing Gandhi of Bidar 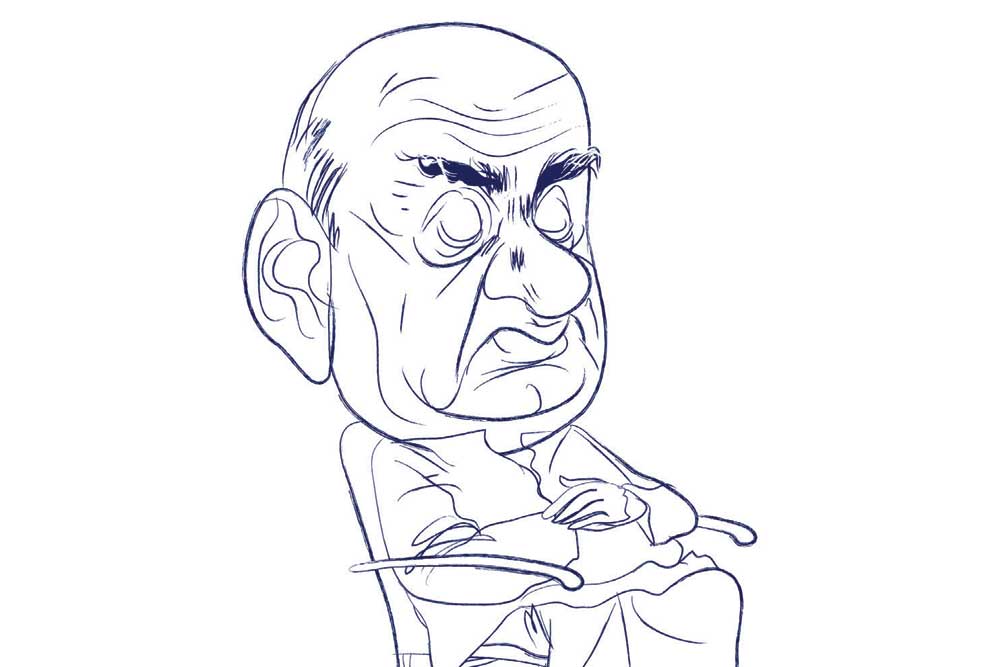 ONLY THOSE  who have been struck by lightning once believe that lightning can strike at the same place twice.

On June 1st, 1996, in circumstances comprehensible only to astrologers, a patriarch from Karnataka Haradanahalli Doddegowda Deve Gowda became the 11th prime minister of India. He lasted only 10 months, being abandoned by his principal coalition partner, the Congress, in April 1997. Those few who remember that little interlude in our national history recall a rather merry laissez faire Government; no questions were asked and none were answered as those so inclined made hay in that brief sunshine.

Better known is the remarkable consistency with which Deve Gowda would fall asleep during public functions. When a newspaper published a photograph of the dozing prime minister, he commented: “I may be a sleeping politician. But one should know that a sleeping politician is always awake about national politics. I am not like politicians who sleep on national issues though they may be awake physically.” So that’s all right, then.

Twenty-two years later, Deve Gowda is convinced that he will become prime minister again. His astrologer has told him so. If you ask him, he passes a broad hand across a broad forehead, indicating that if such glory is written in his destiny, it will happen. This is why Deve Gowda, now 86, is a candidate, once again with Congress as partner, from the Lok Sabha constituency of Tumkur.

MY FRIEND Gopal Hosur and I set off from Bengaluru on the morning of March 31st, a Sunday, and reach Tumkur in about 90 minutes. We enter town through a breezy flyover; the first urban sight is a technology institute to our left, and then we turn into streets claimed by stores and citizens. The shop names are metaphors for aspiration and arrival. Red Chilliz. Sukanya’s One Gram Gold. Royal Boutique. Suman Jewellers. Raja Cycle Mart. Vivo. Comfort Collection underwear. A mini mall under construction. Small boutiques, jewellery stores, and wine shops with martini glasses on glass shelves. Administrative buildings and amenities like bus stations are far superior, all across Karnataka, to most other states.

Tumkur always had a reputation far bigger than its size, as home to the Swami Siddaganga Mutt; its venerable founder died recently at the age of 105, and his disciple-monks continue the excellent charitable work he began, feeding 10,000 impoverished children twice a day. He is remembered in large portraits that dominate both public and private space. Politicians take care to seek the mutt’s blessings.

Today, the once small town has become a |teenager, well on its way to an adult city. The bustle of open shops and family restaurants becomes audible by noon, when the city begins to converse with itself.

ROTI IS made of rice in Tumkur. It is called, accurately, akki roti, or rice-roti. It is thin, flat, rolled, spread, served with enough dry red chilli to fill an old gun with powder. It is eaten without accompaniments, like vegetables. It is delicious; but I could barely finish one akki roti.

The restaurant is in the market, in front of a car park, hemmed in on two sides by shops that are beginning to find customers. The most prominent clothing outlet is named Gujarat Fashion, and does well enough to afford marketing; there are arrows on the way leading towards it. The merchandise is a mix of styles but the young, inevitably, are winning the battle for display space.

The lunch conversation at our long table is, naturally, about the elections: what else is there to talk about this summer? It becomes clear very quickly, even in this high-profile constituency, that the General Election is about one person: Narendra Modi. You either want him for another five years, or you do not. A convivial meal loosens tongues from the strictures of partisan loyalty. If the contest had been with just the BJP, Deve Gowda’s perennial ‘Mannina Mega’ (Son of the Soil) line, despite being passé might have worked yet again. But he is also up against Narendra Modi, and the final consensus on his chances is “50-50”.

THERE IS some good news for the non-partisan onlooker: the jokes are getting better. “Thank God,” says one BJP leader, “that Deve Gowda doesn’t have 28 grandchildren, or all the constituencies in the state would have been taken by them.” At the moment, just two of them, Nikhil Kumaraswamy and Prajwal Gowda, have become candidates, the former from the family fiefdom, Mandya, and the latter from Hassan. His son, HR Kumaraswamy, is chief minister of the state.

Dynasty has two barrels in Karnataka: the Gowdas, and of course, the triangle of middle-aged Gandhis—Rahul, Priyanka and her husband Robert Vadra. The two are yet to ensure harmony between the lower rungs of their parties. Deve Gowda grieved publicly about sabotage. Maybe the story is bigger. When his minister convened a meeting in Mandya to plead for amity, there was confusion when some of those present began shouting pro-Modi slogans.

As a political proposition, dynasty might be losing some muscle.

IT IS INTERESTING how both the subjects stay the same, and the arguments similar, whether you are talking to people in Tumkur or Hospet or Bellary or Dharwad or Belgaum. Rahul Gandhi is not seen as a credible claimant for the Prime Minister’s Office; indeed, that is why Deve Gowda fancies his own chances. In Kolkata, Mamata Banerjee told a press conference in the last week of March, “He [Rahul Gandhi] has said whatever he felt like. I won’t like to make any comment on it. He is just a kid.” Which sums up the feeling across party lines, although it is a bit odd to describe a 49-year-old as a kid.

The question that has risen to the top of Karnataka’s discourse is this: why did Rahul Gandhi reject Bidar as his saviour constituency and opt for Wayanad in neigbouring Kerala? If Bidar is not safe, which seat is safe?

Some political mathematician should check what Congress has lost in order to gain a seat for its president. In Wayanad, Rahul Gandhi has become a supplicant before a dominant Muslim League; he cannot afford to criticise the heirs of Jinnah. If Rahul Gandhi only wanted Muslim support, he could have gone to Bhopal, where he would also have faced the BJP. Instead, he chose to challenge Marxists with the support of the Muslim League. That is the message that has gone across the country.

WHENEVER I THINK about the trials of election candidates I am reminded of the North American crow which can hide seeds in as many as 6,000 locations and remember each one of them. This is the kind of memory that a candidate needs to have. He must recall thousands of names and faces among his supporters. These are the influence merchants who demand, and respond to, name recognition. It singles them out from the ‘unnamed’. Traditional politicians were—and indeed are—brilliant at this art. Those who cannot do this often have name-whisperers close to one ear. It works.

I HEARD THE finest analysis of demonetisation, the preferred subject of former governors of the Reserve Bank of India and wannabe finance ministers, from a manager who lives near Bellary, keeps his ears close to village conversation and was quoting what he had heard. “The cow that gives milk kicks a little.”

OUR NATIONAL highways sparkle; lesser roads are being upgraded with a visible emphasis on deadline. Research and technology add quality, add life to product. The soil around the ore-heavy Bellary is soft; in the past, roads would crumble quickly. Now they hold firm. In the public mind, the new infrastructure is synonymous with Narendra Modi and Nitin Gadkari.

At Hospet, I witnessed how the prime minister has personalised development for the voter. An enthusiastic Modi supporter was predicting an election result far in excess of even BJP’s assessments. Then he added, “I got the road built from Hospet to the coast.” How? “I wrote to PM, and when the road started I got an email saying that work had begun.” We all know that roads are not built on the basis of an email, but the thoughtful reply from the Prime Minister’s Office had made one voter in Hospet a shareholder in a national mission: Development for All. This is the dividend in an election where above 80 per cent of voters want progress to be the central theme of governance. A multiplier effect has made Modi the man who brought change to your door.

WHAT DO YOU DO on a long road journey, from Bengaluru to Belgaum, through Tumkur, Bellary, Koppal and Dharwad. You glance at the fleeting landscape, dip into Agatha Christie, ponder over a line from a magazine. A column in the British magazine Spectator set me thinking. The ancient Greeks believed that ‘at the moment of death, we can see the future’. If true, what does this mean? Are we condemned to know the future only when we can do nothing about it? Is a grave or a crematorium the only real future, and the rest an illusion? The temptation to turn morose is pronounced in the loneliness of a long road. The agreeable remedy is to put ancient wisdom into current context. At which moment does a losing candidate realise that the future is the desolation of defeat? No serious candidate enters the fray to lose. But there comes a moment when you realise that there is no hope. If you are lucky, and realise this sooner rather than later, you can at least stop the spending.

RUMI, THE 13TH century Persian poet of divine ecstasy and earthy human wisdom, is always a charming companion: you can dip into a Rumi collection at random and come up with a jewel, each jewel distinct from the others in his treasury. My eye stops at this verse:

Imagine a man selling his donkey to
be with Jesus.
Now imagine him selling Jesus to get
a ride on a donkey.
This does happen.

Indeed it does, in electoral politics.

Every morning begins with tea and newspapers. The March 31st edition of a famous Bengaluru newspaper published this report, which I reproduce verbatim: ‘With the polls approaching, sales of T-shirts and merchandise branded with PM Narendra Modi’s slogan Main Bhi Chowkidar have spiked over the past 10-15 days. Satyanarayan Prasad, a vendor, said nearly 15,000 T-shirts were sold by him in the last 10 days. According to him, the clothing is being bought not only by BJP supporters but by all youngsters. The T-shirts are priced between Rs 120 and Rs 250. “Never in last few Lok Sabha elections, were the sales of T-shirts on so high,” Munna Kumar at Birchanpatel path said.’ There was a picture of one such T-shirt as illustration.

Decoding this story leads one to the following conclusions:

1. Support for Modi extends far beyond the BJP base.

2. The T-shirts had not come from sophisticated factory; the image on them was slightly off-kilter.

3. The pricing indicated that purchasers were from the middle and lower-middle class; the young, in other words, who had not got employment according to opposition allegations. Whether this was true or not, Modi is the hope icon of the young.

4. There is no market for Rahul Gandhi T-shirts.

5. Sub-editing skills on newspaper desks is in urgent need of better skills, but that is a separate story.