The battle against body shaming 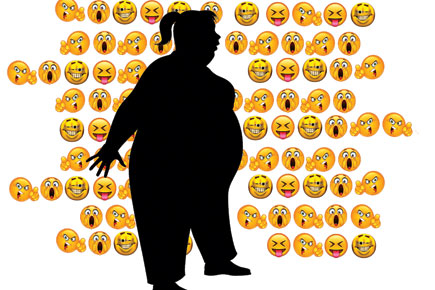 She was the only member of her family who tested positive on a test conducted at a health camp in November 2011. Rhema Mukti Baxter was diagnosed with hypothyroidism, a condition where the thyroid gland does not make enough of the hormone. If one doesn’t have enough, one’s body processes slow down, which results in less energy, and one becomes sluggish. To overcome this, Baxter’s doctor prescribed a pretty strong dose of the hormone. A former student of Delhi’s Indraprastha College for Women, she gradually began to gain weight. People who have hypothyroidism need to exercise twice as hard, given their low metabolic rate. As she had always been slim, the gradual and stubborn weight gain hit her hard.

Not everyone was kind to this change in her appearance. That she was still as witty, retained the mischievous glint in her eyes and would flash her toothy grin didn’t make any difference. Some people, without even saying ‘hello’, would immediately comment on how ‘fat’ she’d become, not caring about how it made her feel. Baxter wore black, had pictures taken at a certain angle in the famous hands-on-waist posture—anything to feel better. People still flung the three-letter adjective at her, and it hurt. “Being called ‘fat’ is never a nice thing. As a kid, ‘moti’ was a term used to tease those not liked. When we grew up, we kind of realised that ‘fat’ had more meaning attached than we thought before. It was worse. It was derogatory. It went on to signify that you didn’t fit in with the stereotype. Being called fat became the one thing everyone avoided,” she says. But when the remarks about her weight didn’t stop—words which some people defended with ‘but we’re only being honest’—Baxter took a photo of the medication she was on, and wrote a post on Facebook and Instagram, explaining what she was going through. It was a bold move, and, for a change, it got people to listen.

Baxter was a victim of ‘body shaming’, where people are mocked for their appearance. They could be fat, skinny, short, have acne, or even be bespectacled. Body shaming tends to leave indelible marks on the shamed, with the shamer hardly acknowledging or even aware of the hurt caused. Just like Baxter called out her shamers, there are now organisations that provide a platform to those who’ve been shamed. Endangered Bodies, Everyday Sexism, and Facebook groups bearing the name Stop Body Shaming offer a voice to individuals who always wanted to but didn’t know how to express their opinions.

These organisations not only allow people to say what they feel, but also provide help and words of encouragement to those in need. Their aim is to get people to be proud of their bodies and appearance, and to sensitise others of the consequences of their unkind words. As Susie Orbach of Endangered Bodies explains, “We need to instill body acceptance from childhood on. Talk to your friends about how you feel and make a promise not to be critical of oneself.” According to its website, Endangered Bodies is ‘a local- global initiative launched by the international Endangered Species summits in March 2011, held in London, New York, Buenos Aires, Sao Paulo and Melbourne’. By engaging people, its activists ‘challenge the current toxic culture that promotes negative body image.’ Orbach, a psychotherapist, social critic, activist and the convenor of the UK arm of this organisation, says, “Our bodies are being reshaped by cultural dictates, egged on by huge industries—beauty, fashion, food, diet, gym, cosmetic surgery—making it hard for people to feel comfortable in their bodies. Instead we can feel our bodies are something we have to change, fix, perfect, even manufacture. And this is a damaging idea and a damaging practice except for the profits of those corporations.”

We’re not alien to how advertisements and magazines across the globe desperately—and successfully— sell ‘the perfect body’. People are goaded to feel ashamed of being overweight. Some of our film actors are a living example, many of whom lost ‘oodles of weight’ to enter the industry and ‘fit in’. Recently, Parineeti Chopra shared pictures of herself that showed her drastic weight loss. Apparently, she “felt obese”, and thus decided to do something. While some people praised her for the effort put in, others felt there was no need for her to lose weight. This brings us to another actor, who has always been mocked at, whether for the size of her ‘broad forehead’ or her body type. Sonakshi Sinha has always faced her shamers head-on. She once even shared a photograph of a skeleton on her Instagram page, slamming people trying to body-shame her.

But, online or offline, the world would make one believe that people don’t lose any chance to ridicule ‘large’ body types. They’ll typically say, “But being fat is not healthy.” What they don’t get is that fat or thin, the other person’s body type is nobody else’s business but that individual’s. Sharada Annamaraju is a Hyderabad- based freelancer, and knows different species of birds and insects like the back of her hand. A lover of all things Bollywood, she’s a level-headed girl who seems to understand the mind of shamers rather well. “If you’re body shaming someone for being too fat or too skinny according to your mindset, you have a problem. If you have to put others down, concern troll them about ‘health’, you’re shallow. You can’t question their talent or intelligence—so you feel small and attack the easiest, most visible thing about them that reminds you of what you hate about yourself.”

There are times when people don’t really mean to be vicious when they say certain things, but it’s the nonchalance with which they say it that makes you wonder about their intentions. If you’ve watched episodes of Pretentious Reviews on YouTube, hosted by the now popular stand-up comic duo of Kanan Gill and Biswa Kalyan Rath, you’d remember how Gill ends the review of Gunda. “Biswa is from IIT and his mom is fat,” he says, and cracks up, wondering how it’s possible for the mother to be fat while the son is so thin. Rath is rendered speechless.

While it’s not a crime to be fat, why do people feel so bad about it? Baxter explains, “Of course it’s not a crime, but it should be made criminal to be mean; and that’s what most of the people who call a person who isn’t even overweight ‘fat’, are. It’s like [saying], ‘We are just informing you that you have put on weight.’ Because that’s something we wouldn’t notice otherwise.”

Women are not the only targets of such shaming. Society expects men to conform to a set of rules as well. As Laura Bates of Everyday Sexism says, “It’s important to say that men also deal with increasing levels of body image pressure, with an idealised male form presented in the media from adverts to movies.” Judging by ads that feature topless, hairless, chiselled-out-of-stone models, it seems that men who are less than delectable to look at are also being made to feel unworthy. Ask politician Shivam Chhabra, who is short, stout and uses humour to fend off shamers. “I had a complex [about my height] when I was younger, but I soon realised that my sense of humour had made me popular. I led a normal life, like many others. So where’s the need to feel bad?” Chhabra says he doesn’t take such shaming to heart as he saw that his height and weight were not really affecting his career or personal life. “You just need to be confident about yourself. Accept the reality of your appearance, because having a complex is no solution,” he adds.

And if you think only fat people are shamed, think again. Bombay-based marketing consultant Pallavi Singh greets you like you’re an old friend. She ensures you’re comfortable before she settles down in her Andheri home and begins to talk. Singh is a strong-willed, independent young woman, and has always been skinny. But she never knew she’d be mocked for it. All through her childhood and early adolescence, she was made fun of for being skinny. People ‘concern trolled’ her parents, telling them their eldest daughter (she has two younger siblings) may not get married because she’s so skinny. These comments didn’t contribute to many happy memories for Singh, who says she’d begun to feel unattractive. Things changed only after she moved to Pune for her MBA. “I just happened to notice myself in the mirror and liked the person I saw,” she says, “And then things changed.” Singh is now an award-winning fashion blogger, and one of the aims of her blog, quirkily titled Moda Ninja, is to stop all kinds of body shaming.

While people like Baxter and Singh have been on either side of the scale, some others have been on both sides of it, and have usually succumbed to ‘peer pressure’. August Gunwall had seen so much body shaming around her that the frustration and eventual relief on knowing she could make a difference formed the basis of her Facebook group Stop Body Shaming. Through the group, Gunwall and her team encourage everyone to share stories, questions and comments. The 22-year-old mother of one aims to give her child the best she can by encouraging her not to be self-conscious or feel discouraged, as Gunwall once did. “It seems like everyone has some kind of insecurity. I have been on all sides of the weighing scale. I was ‘chubby’ in high school and constantly teased by friends and family. Once I lost weight and began to feel comfortable in my skin, people began to ask me why I wasn’t eating. They told me I was anorexic, joked about seeing my bones. I felt like no matter how hard I tried people would always have an issue with my body. But then I realised their issues with my body aren’t my problem. The only way I’ll be happy is to start loving my body and stop tearing it down.”

Calling out body shamers is certainly a step in the right direction. As Bates says, “We hear from a huge number of men who say the project has opened their eyes and changed their behaviour, and from many women who have reported an assault or discrimination case for the first time because it has made them realise they aren’t alone and they have the right to stand up.” Recently, actor Kate Winslet too came out against body shaming by sharing a close-up image without a trace of makeup. Why is this important? Perhaps Meaghan Ramsey, who conducted a TED talk titled ‘Why thinking you’re ugly is bad for you’ last October, has answers. By Ramsey’s Twitter bio, she’s an ‘ambassador for girls’ confidence’, but she delivered the talk as Global Director of the Dove Self-Esteem Project.

Through her talk, Ramsey attacked the disturbing trend of popular hashtags such as #thighgap, #thinspiration, #proana (pro anorexia) and the phenomenon of men also being put under pressure to have chiselled jawlines and six-pack abs. She spoke about how it’s time we stopped paying attention to appearances and focused instead on people’s efforts and actions. “Let’s build self-esteem into our school curriculums. Let’s each and every one of us change the way we talk and compare ourselves to other people.” Now, that would be a good beginning.