Two Men on a Mission in the Valley

Can Narendra Modi and Mufti Mohammad Sayeed afford to miss history in J&K? 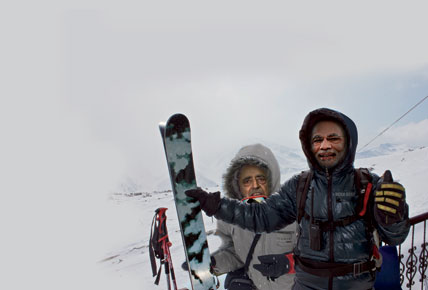 Mufti Mohammad Sayeed is an ardent Atal Bihari Vajpayee fan. And the patriarch of the People’s Democratic Party (PDP) believes that he can do business with the man he considers to be Vajpayee’s successor, Narendra Damodardas Modi. Curious.

The hawk-nosed, white-haired Mufti, at a robust 79, is not your average Valley neta. He is a man who knows the difference between a politician and a statesman, and it was very much on display when he joined the then VP Singh-led National Front-Left Front coalition in New Delhi in the late 80s—a government at the Centre that was kept afloat by external support from the BJP despite sharp ideological differences. Years later, statesmanship was the very quality he sensed in Prime Minister Vajpayee’s approach to the Kashmir issue: a genuine political willingness to resolve grievances. “His approach to Kashmir was not partisan. He was genuinely interested in resolving the Kashmir tangle,” he tells Open in a candid conversation.

Within the leadership of the PDP—it was formed in the late 90s after a decade of violent, armed battles against the government and the near-complete takeover of the ‘azaadi’ plank by dangerous Pakistani-directed groups such as the Lashkar-e-Toiba and Jaish-e- Mohammad— there is a strong belief that the BJP-led Government headed by Vajpayee was far more responsive to widespread grievances among Kashmiris than any of those led by the Congress. Sayeed buttresses that contention by citing one small incident: “As Chief Minister, I visited New Delhi, and during talks with BC Khanduri [the then Surface Transport Minister], requested that our demand for two road projects be prioritised. I barely returned to Srinagar that evening when I found a signed fax from the Minister approving both projects without ado.”

This may be the Mufti’s last chance at chief ministership of Jammu & Kashmir, but he thinks that the PDP and BJP have been enjoined by history to transform the Kashmir narrative in tune with mainstream India. Alienation, his party leadership contends, is unlikely to be resolved by merely injecting huge doses of money into the state, but by first addressing the everyday vocal grievances of beleagured Kashmiris and by being seen as sustainably delivering such essentials as food, water, shelter, employment and infrastructure. Professor Sumantra Bose, a noted scholar on Kashmir, maintains that the Mufti and his daughter, at the end of a futile decade of interminable internal violence that laid to waste a whole generation, were highly sensitive to the fact that there was ample space for the formation of a regional party divorced from militancy and keen to participate in the country’s electoral process to voice Kashmir’s grievances far more effectively than the National Conference had done thus far. With better political success at every successive election since its birth, the PDP is better positioned to be an agent of change in J&K.

Mufti Mohammad Sayeed was India’s Home Minister in 1989 when militants chose to kidnap his younger daughter Rubaiya Sayeed as a potent target to highlight their cause. This high-profile event marked a significant turning point in India’s shared history with the erstwhile princely state. Two-and-a-half decades later, the Mufti is keen that Kashmir “jettison the baggage of the past ” and his party rewrite history in a constructive partnership with the Modi Government at the Centre.

No less curious than the Mufti’s open admiration for one of BJP’s tallest leaders is the initiative taken by the PDP in the wake of the recent Assembly polls to discuss a possible coalition government in Srinagar with India’s ruling party. Teasers had promised an awkward tango of a couple of splayed-footed suitors, seized upon promptly by cynics for target practice. Ideologically, both parties are located at opposite ends—the BJP is steadfastly opposed to the very existence of Article 370, which grants J&K its ‘special status’, while the PDP is insistent on it being honoured. The latter is also determined to push through its demand for a phased, time-bound revocation of the Armed Forces Special Powers Act (AFSPA), and favours involving separatist leaders of the Hurriyat Conference in any peace talks.

The two sides are in the midst of a dialogue to ink a common programme prior to government formation in Srinagar. There is cautious optimism on both sides that a historic arrangement can be put in place by February end at the latest.

Meanwhile in the Valley, the PDP’s arch-rival National Conference is watching developments keenly, waiting for the proposed Mufti-Modi grand coalition to fail and strengthen its own popularity for the next round of polls.

That does not bother the Mufti in the least. “We will work hard to bring the state back on rails,” he says, “If we fail, let them exploit the situation. I am not worried. In any case, it would be another mainstream party that would exploit the situation. But I am confident that the new government will be able to perform well.”

In New Delhi, BJP leaders admit that it is a challenge to find mutually acceptable language to state a common position on key issues such as Article 370 and AFSPA, but are dismissive of cynics going ballistic. “Politics is the art of managing contradictions of an ideological and programmatic nature,” says a senior BJP leader, “History is witness to many such post-poll alliances of parties with diametrically opposite worldviews working successfully together in regions, even those with situations of prolonged alienation from the mainstream… The BJP will of course never enter any agreement that endangers national interests in the remotest manner. And the attempts to write obituaries for the PDP-BJP alliance government, which is now a work-in-progress and is awaiting formalisation, is premature and knee-jerk.” He adds, “The focus should remain not on the differences between our two parties, but on the common intent of both parties to put J&K back on the mainstream path of integration and a healthy economy. Our objective is to provide an efficient workable government that will resolve key grievances and directly address sentiments of alienation, and one that is inclusive of all of the state’s people, whether in the Valley, in Jammu or in Ladakh.”

The formation of a BJP government in Srinagar, albeit in alliance with a regional party, would signal the surmounting of a historical challenge. Political analysts point out that the BJP’s fundamental beliefs have traditionally included the abrogation of Article 370, the construction of a Ram Temple in Ayodhya, and the implementation of a Uniform Civil Code. However, by the time the NDA came to power at the Centre, the strobe lights had dimmed somewhat on all three as a measure of political pragmatism. In addition, a set of actions taken by the Central Government had rendered Article 370 far less potent than it was before the 50s. In recent years, the BJP has also calculatedly chosen to abandon the trifurcation line it had been pushing unsuccessfully during earlier election campaigns. The apparently polarised mandate thrown up by the electorate, they contend, has delivered a clear message that demands that both the BJP and PDP give up their old established positions and make a new start in the relationship not just between Srinagar and New Delhi, but also between Jammu, the Valley and Ladakh. This calls for asymmetrical thinking rather than conventional tried-and-failed responses.

It was in the same vein that former Prime Minister Vajpayee had pressured Kashmiri politicians to visit Belfast in Northern Ireland and study the implementation of the 1998 Good Friday peace agreement. “Kashmir requires out-of-the-box thinking for a solution to its problems and Vajpayee was cognizant of this,” says the Mufti, “The introduction of the bus to Lahore, the re-establishing of trade ties, all of these were proof that he was a leader who had the will and determination to figure out a solution to Kashmir’s travails. In 2001, Vajpayee understood the urgent need for reconciliation in the state and the imperative need to change the political mindset in order to achieve that change. His departure in 2004 was Kashmir’s loss. He would have been able to find a lasting solution to the Kashmir conundrum.”

The PDP leader is hopeful and keen that the NDA Government at the Centre emulates Vajpayee. “If he swings this successfully by lending every support from the Centre to Srinagar, Prime Minister Modi will be credited with radically re-charting Kashmir’s relationship with India,” the Mufti asserts.

The government formed in Northern Ireland after the 1998 peace agreement was a widely representative one; it even had the Gerry Adams-led Sinn Féin, whose armed wing, the Irish Republican Army, was deeply involved in the prolonged Ulster conflict that had seen decades of violence. And Sinn Féin was avowedly in favour of a united Ireland. Unsurprisingly, the Ireland peace paradigm has also been invoked by Professor Sumantra Bose of the London School of Economics. “There is, in fact, a certain broad similarity in the configuration of the two conflicts,” he has maintained. Both were rift- ridden societies with differing and sharply defined cultural identities and divergent political allegiances. One key lesson to be learnt from Northern Ireland, he said, was the value of initiating a dialogue that’s as inclusive and broadbased as possible so that every group has a stake in the peace process.

Against the backdrop of fast-changing political dynamics the world over, Mufti Mohammad Sayeed is determined to take to the next level what he believes Vajpayee had begun. He is keen to work with the BJP to seize the current opportunity and reverse the Kashmiri mistrust of the Centre that goes back to the days of Sheikh Abdullah and Jawaharlal Nehru, and leave a worthy legacy for Kashmir’s Generation X. “Prime Minister Modi has the mandate necessary to make this work. It is time to turn the page decisively on Kashmir’s narrative of alienation from the mainstream, its recent history of violence, bloodshed, corruption and betrayal,” he says.

With Modi, the Mufti is confident the devil can be banished from the details and belie the cynics once and for all. Aware that this may be his last shot at chief ministership, the Mufti is aiming for a seat in the front row of Kashmir’s history.