Reading the Future in the Ashes of Thursday

A comrade who defies both biology and ideology in Kerala. The triumph of Kancheepuram kitsch in Tamil Nadu. The compelling subaltern-sandesh socialist in Bengal. A Modi wave on the Brahmaputra. And a Family that couldn't provide the sheltering shadow for a withered party...The summer thriller of 2016 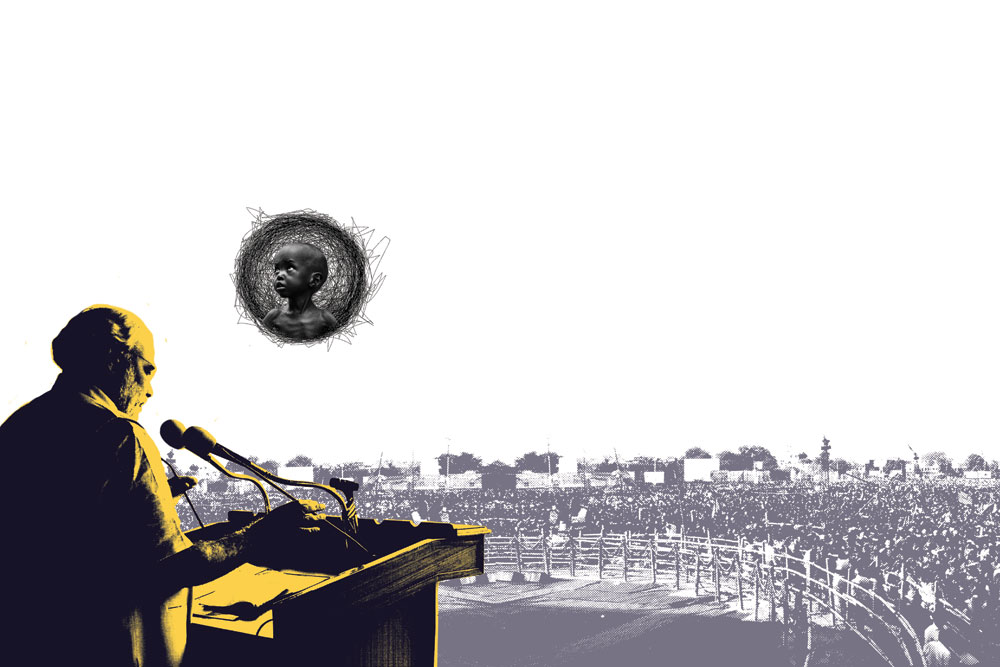 WHAT MAKES AN Indian election really Indian is the dramatic tension it produces on a stage creaking under the weight of characters who are delusionary as well as disruptive, all promising to shift history and redeem geography. What is being played out is something as noisy as India in which merge earthly passions and airy ideologies, salvation theologies and hallucinatory pledges. It is a show in which the elasticity of democracy demands suspension of reason and a free reign of faith. At times, it may resemble the most overstretched political thriller set in a zoological park that is amorally more compelling than Orwell’s animal farm. What remains constant is the raw wisdom, the ruthlessness of realism, of the battered spectator-participant in this interactive production. In the end, when the stage is littered with the remains of all those exaggerated reputations, among them even the psephologists’, when the triumphant promises more, what shines in singularity is the instinct of the Indian voter. By the afternoon of Thursday, 19 May, it was on display once more as victory marches started in Kolkata and Thiruvananthapuram, in Guwahati and Chennai. The verdict only marks a pause in the campaign.

When Narendra Modi disrupted Kerala’s bipolar idyll and compared the state’s welfarism to Somalia’s, it instantly activated the Malayalee’s hurt (or false?) pride

What defines the campaign is the campaigner, and in terms of cultural as well as political variety, this is the place that provides originals and stereotypes in abundance— among them subrural revolutionaries and subnationalist patriarchs, the last divas of kitsch and street fighters in crumpled saris, communalists and commissars—and the India of some of them is smaller than their shrunken constituency. On the stump, they are all poets of change, they are mothers and sisters, leaders of the shirtless and readers of the future, eager to build an emotional covenant with the masses. Part melodrama, part pantomime, part pastiche, every candidate at play in some ways brings out the Indian traits of a campaign that, even in this media age, remains intimate. The performer is up close, always. For the Indian voter, what has been uttered does not require a pundit’s interpretation. Every word gets amplified in the world’s biggest echo chamber of a democracy.

Even as celebrations go on, let us return to the four states and listen to the voices coming from the wreckage of conceits and the rustle of change. The reward of this great Indian polyphony is that the meaning, or the message, is never lost.

VS Achuthanandan in Kerala defies both biology and ideology. Almost as old as the Bolshevik Revolution, he is the last fossil still walking—and winning

IN THE SOUTH, one man—and his mannerism— stood out, defying both biology and ideology. VS Achuthanandan, in his early nineties, is a communist of rare vintage, and almost as old as the Bolshevik Revolution. He is a permanent showman in starched kurta-dhoti, reintroducing himself to a star-struck audience as jester, iconoclast, lampoonist, debunker and satirist as he leaps from one blockbuster rally to another. He is perhaps the last Stalinist with a mass appeal who evokes more laughter than fear. In the sweltering Kerala of the past few weeks, he was one sorceror who played with the mass mind—and it worked. It is always a VS who has the most biting soundbite at the tip of his most mimicked tongue. When Narendra Modi came to Kerala to make possible what was seen to be impossible in ‘secular’ Kerala (and where communalism is not a social evil but an industry), to get the first BJP legislator elected from the state, only VS could match Modi’s eloquence with his repartee. The dispossessed in Kerala are worse off than Somalians, Modi said, which instantly activated the Malayalee’s hurt (or false?) pride. More than rebutting the disruptor of Kerala’s bipolar idyll, the old man was more interested in making use of the Somalian metaphor for more effective, mass friendly results. Oommen Chandy’s UDF government was worse than Somalian pirates in looting Kerala, he said. Prematurely vanquished in the battlefield, Chandy even ran to court for shelter—but in vain.

VS on the stump was a fossil with limitless kinetic energy, a living, explosive contradiction that could not be contained by his opponents within the party or without. Overnight, he became a twitter terror, and was always, at least in the popular arena, two steps ahead of the formidable party czar, the Lord Voldemort of Kerala communism. Another contradiction: progressive Kerala listens more to the harmless Stalinist than to the moderniser who does not smile. We shall see where the garland falls on Coronation Day in Thiruvananthapuram.

Still, I may not be the only one who has missed the siren call in a campaign that was otherwise very male and even geriatric. Saritha Nair, the solar-powered vamp who shook Kerala and set the terms of UDF’s fall, and whose private secret may kill even more Congress careers, was not there. The most popular Malayalee woman’s absence in the arena was, in some ways, the most pervasive presence in Kerala’s Campaign 2016.

TALKING ABOUT OLD men still fighting, in the neighbouring Tamil Nadu, the nonagenarian scriptwriter missed the winning formula, again. Maybe his party, DMK, was as dysfunctional as south India’s most bloated political dynasty. Maybe imagining a plot more bestselling than the Kancheepuram kitsch of Amma was beyond his superannuated mind, and, maybe, Beloved Son Stalin was not worthy of his name. What is least acknowledged is the fact that, beyond the ‘sop’ operatic glory of Jayalalithaa lies the story of a lone woman whose political journey began in the open hearse of MGR, the first superstar of the south, as the uninvited other woman. She endured the pain only to conquer the legacy of her lover and mentor. Power exiled Jaya to a world where accountability or property or political morality was not applicable, and in that respect, her story, marked by supreme power and bathetic falls, reflected the evolutionary story of Dravidianism itself, an idealistic struggle that degenerated into subnationalist vulgarianism. She campaigned with celestial authority, the Tamil Madonna on the stump as Our Lady of Deliverance. As Amma the most Benevolent, as Amma the Unforgiving, as Amma who remembers the slightest and the remotest hurt, Jaya made the scriptwriter’s clan redundant, and suddenly, the future became pitch darker for the patriarch in dark glasses who was denied one last blockbuster. It is as if Tamil makkal are happy to be subjects of Jaya’s imperium. Haven’t all of them been promised a shopping mall each? Everything was larger than wretched life in the Tamil Nadu campaign, and the size of the victory only shows Amma has become the most enduring Tamil state of mind.

IN THE EAST, Sister was as fierce a force as Mother. Mamata Banerjee has not just retained power, her bare foot kicked the last vestiges of a lie to irrelevance. It was desperation verged on the despicable when the princeling from Delhi landed in Kolkata to lend a helping hand to the doddering comrades of the East. Perhaps, in retrospect, the princeling who came to Kolkata was a pastiche of the angry outsider-insider who once went against his own family tradition by ridiculing the Marxists who lived outside time. The comrades had Bengal for more than three decades, and the state was on its way to become a hybrid, a combination of Havana and Pyongyang, though Jyoti Basu was not even remotely the Maximum Leader or the Great Leader. As the ideology calcified, and the leaders began to whither away along with their subrural soviets, someone was energising the same social space that belonged to the Marxists. There cannot be a subaltern-sandesh socialist more compelling than Mamata Banerjee. In power, she was Jayalalitha without her convent school sophistication or imperial temptations. Nevertheless, the aesthetics of her me-alone reign was kitsch. The urban elite may scowl at her inelegant urbanisation—Kolkata by night, for instance—or at a series of scandals, but this woman’s easy access to the mass mind remains intact.

There cannot be a subaltern-sandesh socialist more compelling than Mamata Banerjee, who is Jayalalithaa without her convent-school sophistication or imperial temptations

In the end, as Didi soared, the detritus of a desperate, ugly alliance looked as horrifying as the remains of that flyover on Vivekananda Road in Kolkata.

THE REAL THUNDER from the East came from Guwahati. To some extent, BJP in Assam today is like Trinamool in West Bengal five years ago. Here, till the last humiliating moment, one of the oldest war horses from the Nehru-Gandhi stable believed in his own infallibility, refusing to see the shaky ground beneath his 81-year-old feet. Fifteen years ago, it was an Assam scarred and divided by tribal hatred that brought Tarun Gogoi to power. He played the unifier, at least rhetorically. On the afternoon of 19 May, it was the story of another old man who was too comfortable in his hallucinations to come out with an alternative slogan to the usurper’s ideas of change and unity. Smart leadership (of Sonowal and Sarma) and shrewd calculations added to what was undeniably a Modi wave on the Brahmaputra. The mandate has not only rejected the conventional wisdom of vote bank politics; it has shown that change can be more than the oldest cliché mouthed by the least credible politicians.

IN THE SUMMER of 2016, the Family was not a sheltering shadow for India’s oldest, and unled, party. Follow the ashes of Thursday on the scorched earth.