The minority report on the man is also fairly upbeat. More than half the Muslims and Dalits polled in the survey feel Rahul is batting for them. 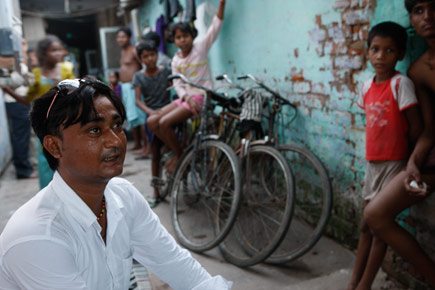 The minority report on the man is also fairly upbeat. More than half the Muslims and Dalits polled in the survey feel Rahul is batting for them.


The minority report on the man is also fairly upbeat. More than half the Muslims and Dalits polled in the survey feel Rahul is batting for them.

On the outskirts of Kanpur city, a few Dalit bastis lie forlorn amidst squalor. Some of the land belongs to the Lal Imli Mills, which now gives employment to only about a thousand among its once 20,000-strong workforce. One of them is the father of a 28-year-old namesake of Rahul Gandhi, Rahul Gautam. His father is still employed with the mill, but gets his meagre salary only once every 2-3 months. As much as Gautam wants to help his father, there is not much he can do in the absence of a job. This, even after he has a Master’s degree in sociology. All around Gautam, there is filth and scum. In the absence of proper toilet facilities, most Dalit dwellers defecate in the fields between the two jhuggi clusters. A drain carrying muck and sewage flows through. A few young men are trying to catch hold of a pig. It squeals and runs all over the place, chased by the men who intend to slaughter it for meat—which is hard to come by in these parts. “I want to trust Rahul Gandhi, but somehow I cannot,” confides Gautam. In his view, the leader’s habitual dining and nightovers in jhuggis with Dalit families is not doing his caste brethren much good in any substantive way. “The educated among Dalits should get jobs, business opportunities. But who will give me a job? I have no backing,” he complains. What’s worse, Gautam expects Rahul to shun Dalits once his party is voted to power, “like Mayawati did”. The way he sees it, “For the first six months after coming to power, she played T20. And then she failed when it came to the Test match.”

In another corner of Kanpur city, however, there’s a man who does not share Rahul Gautam’s pessimism. Shakil Ahmed, 32, is studying in a madrassa to be an aalim (madrassa teacher). Unlike Rahul Gautam, Shakil Ahmed thinks Rahul Gandhi can bring about the change that UP needs. “I don’t think all his acts of spending nights with Dalit families are political stunts,” he says. “And his concern for the upliftment of the Muslim community is also genuine,” he feels. But his worry is that Rahul might “follow the footsteps of senior Congress leaders”, who, he alleges, have done nothing for Muslims. “That is one trap he shouldn’t let himself fall into.”

Some 80 km from Shakil’s madrassa, Dr Lubna Kamal is busy shopping in Lucknow’s bustling Hazratganj market. She also thinks that Rahul Gandhi holds a lot of promise. “That is because youngsters are honest,” she says, “Also, I feel that Rahul Gandhi is a simple guy who is serious about his work.” However, she makes it clear that this doesn’t amount to unqualified loyalty. She is quick to add that he shouldn’t do the sort of things his father did. “His father ordered the opening up of locks at the Babri Masjid,” she specifies. “But we must move forward and give him a chance. At least I will.”

It’s an openly expressed opinion. But yet she refuses to be photographed for this report. “My fiancé will kill me, you know.”