‘Kejriwal is no match for me’

Says BJP’s Chief Ministerial candidate Kiran Bedi, whose victory depends on how well she can get through to the city’s poor and its minorities 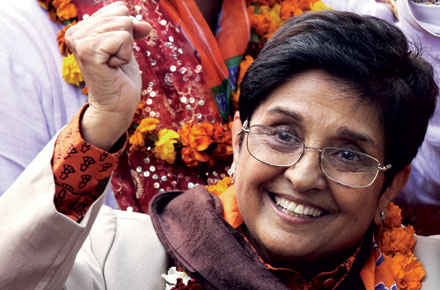 It’s early in the morning and Kiran Bedi is taking a walk in the bylanes of Krishna Nagar, the constituency she is contesting the Delhi elections from. There are around 50 supporters with her, shouting slogans and distributing pamphlets. An elderly lady tries to approach her; Bedi moves instead and touches the lady’s feet. “I am you daughter and need your blessings. Blessings to give you a better and safe Delhi,” she says. The woman assures Bedi of her vote, saying that she voted for the BJP in December last year too. Going forward, the policewoman-turned-politician stops a vegetable vendor, Gokul Nath. “Does anyone trouble you in your business?” she asks. Nath tells her of a policeman who extorts money from him on a daily basis. “Would it be good if I give you a number and you can call anytime if someone troubles you? I am here to end your woes,” replies Bedi. The two-and-a- half hour road show ends with a small speech. By then the crowd has more than doubled with more supporters joining it. “I won’t promise you the moon. I will dedicate myself to resolving your daily life issues. Please give your suggestions freely,” says the BJP leader.

Bedi spends three hours every morning —from 8.30 to 11.30 am—in Krishna Nagar, and the second half of the day campaigning in other parts of Delhi, as requested by the party. “Meeting people on the street is not something I am doing for media attention. I have not invited you,” she says. “I have been doing this for 40 years. It is just an extension of my commitment to serving the people.” Ever since she joined the BJP and was declared its chief ministerial candidate, Bedi’s vote-canvassing has been frenetic. She is also preparing a white paper setting out her priorities should she become Delhi’s CM. At one rally, she announced that she would herself handle the Home and Education portfolios once the government was formed, eliciting sharp criticism from the Aam Aadmi Party (AAP) for behaving as though she were already Chief Minister. “What’s wrong in that? I am informing people about my strategies and work style so that they can make an informed decision,” she says.

AAP has made her the prime target of its election campaign. She claims to be unfazed. “I have dealt with criticism all my life and I welcome constructive criticism based on issues. But I cannot do what others are doing. Rather than talking, I would make my actions speak. I am here to work,” she says.

Bedi’s reputation is what made the BJP pick her as its CM candidate, despite her being an ‘outsider’ to both politics and the party. She was India’s first female IPS officer, and was seen as a tough administrator who believes in delivery. While in charge of Delhi Traffic Police, she earned the nickname ‘Crane Bedi’ for her zeal for having illegally parked vehicles towed (a sub-inspector from her department is said to have even booked the car of then Prime Minister Indira Gandhi for illegal parking). As Inspector General of Police, Chandigarh, Bedi once ordered all nightclubs shut by 10 pm. “I am not here to provide a nightlife to the people. My job is to maintain law and order,” she said at the time. As Inspector General of Prisons, she became known for her reforms in Tihar Jail, converting it into a reform home for prisoners by introducing higher education, yoga and meditation. In 1994, she won the Ramon Magsaysay award for her work. In 2007, she was set to become Delhi’s Police Commissioner, but YS Dadwal, an officer two years her junior, was given the post instead. Bedi resigned in protest. “At that time, it was the UPA Government at the Centre,” she says. “I resigned because I did not want to waste my crucial years. They must be regretting now… but I am happy they set me free to do more meaningful things.”

Bedi was one of the first to join Anna Hazare’s campaign when he began his fast as part of the public agitation over the Lokpal Bill in 2011. Along with Arvind Kejriwal and Prashant Bhushan, Bedi became the face of that anti-corruption movement. In 2012, when Kejriwal and others decided to float a political party, Bedi kept herself out of it. To those who accuse her of betraying Anna by joining politics, she retorts, “I was with Anna till the last moment when Lokpal got passed in Parliament. Even today, I am trying to reach out to him.”

Her decision to join the BJP was not taken overnight. For the past 12 months, she has been a vocal supporter of Narendra Modi. “I am truly inspired by his vision and commitment to work. He is a true leader who meets the aspirations of today’s India,” she claims. “I am in the BJP only because of him. Anyone would feel proud to be part of a team with such a towering leader.” In the same breath she showers praise on BJP President Amit Shah. “He is an excellent manager and taskmaster. You get to learn a lot from him. I am thankful to him for giving me an opportunity to serve the people.”

Meanwhile, an AAP poster that depicts her as a political opportunist is doing the rounds of Delhi. “If you compare, then [Kejriwal] is no match [for] me. I have served the people for the last 40 years and everyone knows it. I have never compromised on my values and left things in the middle. Unless I am not committed and convinced of my dedication, I don’t take any work,” she says.

In Bedi, the BJP found someone to compete against Kejriwal; an answer to the rhetoric that every election is fought under Modi’s brand name. However Modi still remains the rallying point, with the party’s campaigns still singing the tune, ‘Chalo chale Modi ke saath’ (Let’s walk with Modi). After Bedi’s announcement as the chief ministerial candidate, the BJP is now printing new posters with pictures of both her and Modi. “She is the best bet BJP could have put against Kejriwal,” says Sanjay Kumar, director, Centre for the Study of Developing Societies. “She has a good track record, and her image of a fighter puts her in strong contention.”

Her image as a ‘super cop’ has, however, generated some resistance to her in some circles. Some leaders within the BJP feel that she needs to learn how to take others along with her. “As a leader, you should be liberal enough to listen to others and treat them as equals,” says a Delhi BJP leader. Soon after the declaration of her candidacy for Delhi’s polls, voices of dissent emerged from the party’s state unit. After a few strong words from Amit Shah demanding that members toe the party line, no one is ready to air these comments in the open any longer. But behind closed doors, it’s a different matter altogether.

Bedi says there is no resentment against her. “I am new to the party and it will take time for all of us to know each other. In fact, I have to learn from them,” she says. “If you saw the day I filed my nomination, everyone was there. It’s a big family and I am working as a member of the family.”

The big question is whether Bedi can do for the BJP what Dr Harsh Vardhan couldn’t in 2013—win an outright majority. It had won 32 of Delhi’s 70 seats, falling just short of the required 35 to form a government. “I don’t think pitting Bedi is going to help BJP much,” says Sanjay Kumar. “Bedi has a fan following among the middle- class, which already voted strongly for the party in recent elections. This would consolidate its middle-class vote bank. But what about the [other] classes and minorities, [among whom] AAP has gained considerably since the last polls?”

Bedi knows the challenge is to attract that vote bank, which is why she makes it a point to reach out to street vendors and auto-rickshaw drivers during her campaign. “I have been a social worker, and with my two organisations, Navjyoti India Foundation and India Vision Foundation, have tried hard to better the lives of marginalised sections of society,” she says. If she gets through to them and gets their vote, then Delhi may see an able, hardworking and clean Chief Minister.