Yet again settlers from one Indian state have taken over large parts of another’s farmland, altering the farm economy, power equations and social setup. 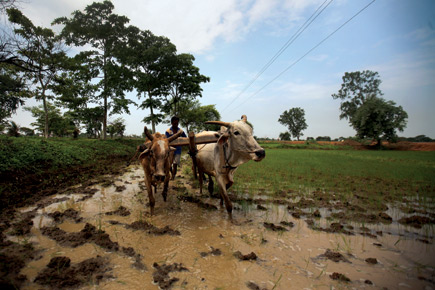 Yet again settlers from one Indian state have taken over large parts of another’s farmland, altering the farm economy, power equations and the social setup.


Bending side-by-side in a straight line, three men and four women, all holding saplings in their hands and working voluntarily, solemnly help Meena Satnami sow paddy in her field. This is a symbol of their defiance, a token of their refusal to give in to the intense scramble for agricultural land in Chhattisgarh by farmers of Haryana, a state more than a thousand kilometres away.

Meena’s six-acre field is among the few plots in Chorbhatti village in Chhattisgarh’s Durg district that are still owned and cultivated by locals, Satnami Dalits mostly. Her patch of land shares restive boundaries with three large farms, all owned by rich farmers of Haryana who took them over some five years ago.

For the first two years after she found herself surrounded, it was her husband, Ramlal Satnami, who resisted attempts by Jat farmers to forcefully buy their land. “Three years back, his body was found on the left side of my field. Though the police are investigating it, we suspect the hand of these farms’ owners,” says the widow. “Since then, I have been cultivating the land with the help of my two sons and members of my community. This is the only source of livelihood for us. In no case will I sell it.”

Welcome to the emerging Jatland in eastern India, where hordes of rugged Haryanvi farmers have descended to buy tracts of fertile alluvial and black soil along and near the banks of the Mahanadi, Shivnath, Jonk, Kharun and many other small rivers. Though most of these farmers are settlers, there are some absentee Jat landlords as well. Durg, where most cultivable land has already been bought over by newcomers, is at the centre of this new Jatland—a vast stretch that makes up almost 60 per cent of the state.

The immigrants say they’re here to do agriculture a good turn, but growing landlessness among locals has put Chhattisgarh’s BJP government in a fix. Differences of opinion within the ruling dispensation at Raipur have reached a point that the state is caught between stemming the influx and letting it be. Chandrashekhar Sahu, the state’s agriculture minister, is clear that Haryanvis are unwelcome. “These settlers have rapidly changed the basic character of rural Chhattisgarh,” he tells Open, “Our government is committed to curtailing this trend.”

Ever since Chhattisgarh won statehood in 2000, as many as ten of its 18 districts have seen large-scale purchases of farmland by new settlers. Over the past five years or so, the trend has accelerated. It started in Durg, Raipur, Bilaspur, Rajnandgaon and Kawardha districts, and has recently enveloped Dhamtari, Mahasamand, Raigarh, Korba and Janjgir-Chanpa. The eight districts spared—Kanker, Jagdalpur Narayanpur, Dantewada and Bijapur in Bastar commissionery and Ambikapur, Korea and Jashpur in Sarguja commissionery—are mostly tribal areas where land purchases by non-tribals are prohibited, a measure to ringfence these tribes from predatory acquisitions and disruptive intrusions.

Swarming in are not only ordinary farmers. Influential Jat leaders of Haryana and western Uttar Pradesh have large holdings that flagrantly flout the Land Ceiling Act in Chhattisgarh. The most famous of these is Choudhary Ajit Singh, Rashtriya Lok Dal chief. He owns an irrigated farm of 115 acres at Bansa village in Berala block of Durg district, far beyond the state’s limit of 36 acres of irrigated and 56 acres of non-irrigated land permitted per family of five. He’s an absentee landlord. ‘The Choudhary Farm’, as its signboard calls it, is being tilled by Surat Singh, resident of Sonepat in Haryana. “We have taken Ajit Singh’s farm at an annual rent of Rs 6.5 lakh,” says Surat Singh’s son Sonu, who manages it with the help of labourers (some local and the rest from UP and Bihar). According to Sonu, Ajit Singh bought the farm nearly five years ago.

Look closely at the arrival of new settlers from Haryana, and you see a distinct pattern. They typically sell smaller but much more expensive land back home, and buy the best available farmland here at much lower prices, thereby enlarging their holdings—manifold in most cases. Also, while long-distance farmers such as Ajit Singh prefer to buy large farms straightaway, farmers who actually farm go about it stage by stage. They often use rented land on a trial basis for a few seasons before acquiring their own land. Surat Singh, for example, migrated with his family around six years ago and took almost 200 acres of farmland on rent. Although the family still works mainly on rented farms, three years ago, Surat Singh sold his 1.5 acre tract in Sonepat and got himself 16 acres of farmland close to Choudhary Farm, which he took on rent only about six months ago.

There are much larger land holdings as well, say locals. Amar Agrawal, whose late father Lakhiram Agrawal had migrated from Haryana long ago and was among the founding members of the BJP in that area, is said to control over 4,000 acres of land in Raigarh and over 1,500 acres in Bilaspur. Agrawal is also Chhattisgarh’s revenue minister; it is safe to assume he considers land productivity a policy priority—conveniently enabled by large farms.

But economies of scale must still be reconciled with matters of ‘roots’. “Here, Haryanvis have become Chhattisgarhis,” asserts Sonu, as he starts his bike for his parents’ house on a nearby farm. But Sahu, who senses local resentment of the influx, is not convinced. “Haryana farmers are very aggressive, both in their attitude towards farming as well as the local village community,” he says, “Often, after settling down, they start aggressively buying up more and more agricultural land, damaging the congenial atmosphere in rural areas. These people are different from the earlier settlers who arrived from Gujarat, UP and other areas 20-25 years back. They never came in such large numbers and got easily assimilated within the local population.”

There are many tales of tension, many of them gory. Ramlal and Meena Satnami’s tragic tale is only one. On 10 September 2005, there was blood spilt in Bhurki village in Durg’s Bemetara block. Kartik Satnami and his elder son Punit were hacked to death by some influential settlers from Haryana. “It all happened because my father and elder brother refused to sell about three acres of our land that lay within a farm purchased by a Haryanvi farmer,” says Kartik’s younger son Ramesh, who now looks after the family. The killings so enraged Bhurki’s Dalit Satnamis that they clashed with Jat settlers, forcing them to flee. “The 200 acres of farmland they vacated remains fallow,” says Ramesh Satnami, “No one dares touch it because it is said the farm has been bought by someone close to (CM) Raman Singh.”

Occasionally, ousted locals have hit back. Three years ago at Jhilka village in Durg, two brothers from Kawaji village in Haryana who had brought 100 acres of farmland—Mahaveer Singh and Tejveer Singh—were found dead inside their farmhouse, which had been set afire.

In most areas, though, land takeovers are smoothened by a network of brokers. It’s a web of sales agents, village persuaders, scruffy thugs and document manipulators. For a recent deal in Monhda village, the surnames of three sellers whose land was being pooled with six others’ to create a 90-acre plot was switched from Gond to Goswami. This is how Ganga Bai, Kunj Ram and Ram Lal, members of a Scheduled Tribe, turned into Brahmins overnight—at least in land records. “For allowing their names to be changed, the three tribals were fined by the community,” says Thakur Ram Dhruv, a local Gond leader, “They did pay the fine, but nothing could be done because they had already sold off their land.”

Sellers mostly end up in misery. Budhlal Satnami, a resident of Sirsa village, sold three of his five acres to a settler about five years ago for about Rs 150,000. Today, he works as a labourer on the same land. “For the first time, we are facing the problem of landlessness on a large scale,” says Sahu, “The money locals get from these settlers gets spent very soon.” Destitution follows.

The scramble for farms has seen barbed wire fencing riddle the landscape. Land that once grew paddy for subsistence now has sugarcane, soyabean and other cash crops for bulk supply. Tractors, bore wells and other mechanised objects—harvesters brought in seasonally from Punjab and Haryana—are common sights. “Local farmers hardly ever used underground water for irrigation. Now that we have started using it, locals have begun to emulate us,” says Karamvir, a settler in Shilghat village who’s originally from Lakhamajra in Rohtak district of Haryana, “It has remarkably increased their output.”

But as proud settlers patrol their fields in noisy tractors, local resentment smoulders. Both the BJP and Congress promised protection for local farmers in their manifestos for the November 2008 Assembly polls. The Raman Singh government that was re-elected even appeared to be serious for a while. But the effort has gone cold since. The State Land Use Board, which met under the CM’s chairmanship on 19 February, put off any legislative action until the Assembly’s ‘next session’. But the session ended on 30 July without any sign of the bill.

Sources say the cabinet is divided over whether the state is experiencing a ‘farm grab’ or ‘development’. Sahu, whose constituency Abhanpur in Raipur district has seen some settler-related turmoil, is keen to keep Haryanvis out. “The bill will come up in the next session not only to stop outsiders from buying farmland in Chhattisgarh,” he says, “but also to prevent diversion of agricultural land for non-agricultural purposes.” Those in the revenue minister’s camp are not so sure.

The migration of farmers is not entirely new in India. After participating in Punjab’s Green Revolution of the 1960s, for example, several Sikh agriculturists settled in the Terai region of Uttar Pradesh and later in some pockets of Rajasthan and the Narmada valley of Madhya Pradesh.

But never have settlers come in such large numbers as in Chhattisgarh, and never has a majority of the land been taken over. In that, Jatland in Chhattisgarh is bound to test mass attitudes towards immigration and settlers within the rural Indian milieu.