Is It BJP’s Mahatma Moment? 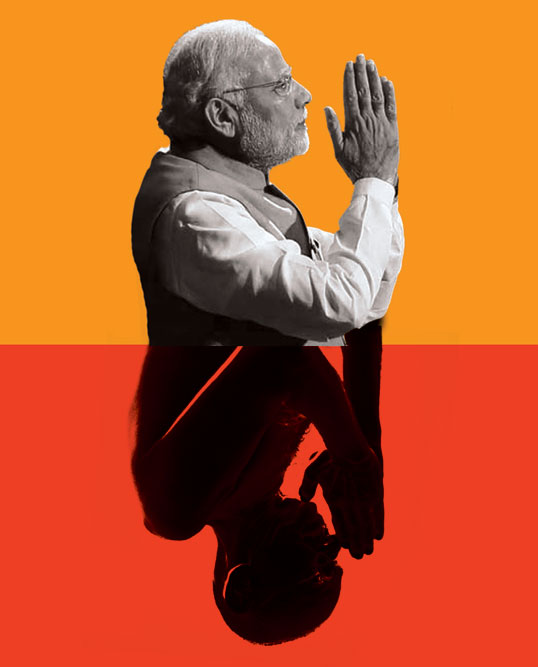 WITH ITS ELECTORAL VICTORY in Assam and a double-digit vote share in Kerala, the Bharatiya Janata Party (BJP) finally seems to be entering those zones of India which were long held out of bounds for it. Lest one consider these mere flashes in the pan, the party’s earlier success in Haryana and its entry to Jammu and Kashmir (J&K) as a coalition partner are indicators that BJP is well on its way to become an ‘all-India’ party.

Is the party finally a force to reckon with across the country? Or is its string of successes since 2014 just a fortuitous outcome of India’s complex electoral landscape? The two positions are rather extreme—one triumphal and the other of denial—and the reality probably differs somewhat from both. Historically speaking, however, the factors behind the BJP’s success over the last two-odd decades are in full view.

This has not escaped scholarly attention. In 2015, the political theorist Michael Walzer came close to blaming Jawaharlal Nehru for not giving ‘communalism’ the kind of fight that it deserved. In Walzer’s view, it was Nehru’s laxity in cementing secular ideas that paved the way for their grave weakening. Two years earlier, the Marxist historian Perry Anderson had sketched a more detailed picture, one that compared Ireland, Israel and India. But in both cases, the delineation was negative: it’s because Nehru did not work hard enough (Anderson suggests he probably didn’t wish to) that India is seeing the BJP’s rise today. In India, these, and other Western authors, have provided cues for local angst (and commentary) on the BJP’s emergence as the country’s predominant political force.

Is there a positive story, one that looks at the how and why of this phenomenon? In historical terms, the Left-liberal narrative of BJP’s emergence and disquieting success stands on weak ground. The truth is that while an idea like ‘secularism’ has great emotive appeal—after all, who wants one set of citizens to go against another, turning the country into a battlefield—it has very little explanatory traction. It is interesting to contrast the BJP’s fate with that of the Congress to try and understand why the BJP has been on an upswing for a while.

A look at the last 100 years of India’s history and a comparison with the Congress as it evolved over the last 130 years is instructive and provides two plausible conjectures.

Consider the Congress’ four avatars. The first one can be dated from 1885 to 1915, when the party followed ‘Constitutional politics,’ eschewed mass mobilisation and was led by a liberal elite at a considerable remove from the Indian masses. The party’s second avatar lasted from 1915 to 1950, which was essentially the Congress of MK Gandhi. This was the phase in which the party displayed considerable organisational acumen and imagination to mobilise disparate groups of people who did not see themselves as constituting a nation yet. The agitation over the Salt Tax led by Gandhi in 1930 was a good example of coalition-building among different creeds and communities.

The Congress party’s third and fourth editions lasted from 1950 to 1970—a period of intense nation-building when party organisation and coalition-building ceased to be of importance— and from 1970 until now, when the party finds itself diminished organisationally, ideologically and politically.

It is interesting to ask if the BJP resembles any of these four versions of the Congress. The question may sound outlandish, but not if one considers the BJP’s achievements over the last 17- odd years. It is not too hard to compare the BJP of today with the Congress of Gandhi’s time (1915-1950) when it was the main force behind Indian nationalism. The BJP’s hard slog in Kerala, where it has managed to cross the 10 per cent vote share mark in the recent Assembly polls, was about forging an alliance of sorts between Ezhavas, Nairs and Dalits. Similarly, its success in Assam can be ascribed to a broad-based coalition between Assamese Hindus and Bodo Tribals. In these aspects—if not more ideologically—the BJP of today is a direct descendent of Gandhi’s Congress of the 1930s.

This aspect of the BJP’s road to success is not a mere accident. In India it takes sustained efforts to build coalitions across communities that are divided by caste, region and religion. Only then can a political party steal a march over its rivals. Gandhi understood that well and the BJP has taken a leaf out of his book.

The other thing to note about BJP’s politics is that it is a centralising force in Indian politics in much the same way that the Congress was from 1950 to roughly 1970. It took the BJP more than a quarter century from 1989 to replace the Congress in that role. This slow transition is not just a story of the older formation’s decay as a party but also of a basic re-ordering of the forces that drive centralisation in India.

In the first two decades of Independence, it was the ‘Centre’—a euphemism for an all-powerful Union Government— that held sway over almost all aspects of national life. From economic decision- making to India’s broad political orientation, everything was pretty much decided in New Delhi. The trouble was that it was a very thin set of actors—basically the Government— that took India in a centralised direction. The business community and the middle-class, among other participants, had little role in shaping India’s destiny. There were ‘national’ business houses with some financial heft, but these were largely concentrated in one corner of the country— Bombay or Calcutta—and had an all-India presence only in name. To use a Marxist term, India lacked a ‘national bourgeoisie’.

Starting in the 1980s, as the Centre began loosening its grip over the economy, two parallel processes have gained momentum. One, the country truly began to acquire a business class that was national in presence as well as outlook. No longer did big businesses watch over a scattering of industrial assets fearing a government take-over. Corporate houses now have assets in multiple states and are concerned about the uniformity of policies across them all. The Goods and Services Tax, which holds the promise of a common tax system across the land, is a good example: the primary demand for this reform comes from the business community. Two, alongside has emerged a mobile middle-class whose members do not necessarily work in the states of their origin.

Unlike the 1950s, when it was Nehru who wanted India to be a strong nation-state, the demand for centralisation now comes from business and the middle-class. While the BJP wants a strong centralised government, support for this comes from a much wider, less elitist, section of Indian society. Here, the contrast with the Nehruvian Congress is stark.

What about the BJP’s future? Will it sustain its success? Milan Vaishnav, a senior associate at the Carnegie Endowment for International Peace in Washington DC, observes that, “Obviously, a central factor is the decline of the Congress. As the [party] recedes, its absence creates a vacuum that can be exploited by the BJP, the only other truly pan-India party to speak of. There is nothing to guarantee that the BJP will consolidate those gains; this depends on building more durable party structures on the ground and perceptions of their performance where they are in power. Furthermore, the popularity of Narendra Modi also helps to reinforce the BJP’s growth into new areas, but this too is contingent on his record in Delhi.” His words find an echo in the work of another scholar who has studied the BJP and explored the tensions in the policymaking process. ‘The BJP’s upper caste supporters, who voted for it in record numbers in 2014, expect their policy interests to be served by the (new) government in ways that may not please poor electorates. Such tensions… surfaced following the Modi government’s suggestion that it might revise India’s Land Acquisition Act to make it easier for private companies to override farmers opposing the acquisition of their land for development projects,’ argues Tariq Thachil, a political scientist at Yale University. The revamping of the 2013 enacted law had to be given up after an ordinance amending it could not pass muster in Parliament. Much of this had to do with the opposition in the Rajya Sabha, but there was some resistance to it within the party as well.

A major enabling condition for the BJP’s ascent lies in the creation of coalitions across communities in India. What matters too is the numerical strength of the middle-class, defined not only in terms of income, but by its acceptance of a certain set ideas, national security among them. As long as it pays attention to these factors, it will rise—barring the occasional electoral setback. Perhaps it won’t be long before the party becomes a ‘new Congress’, albeit one with decidedly conservative antecedents.