How Modi Has Overcome the Inhibitions of History 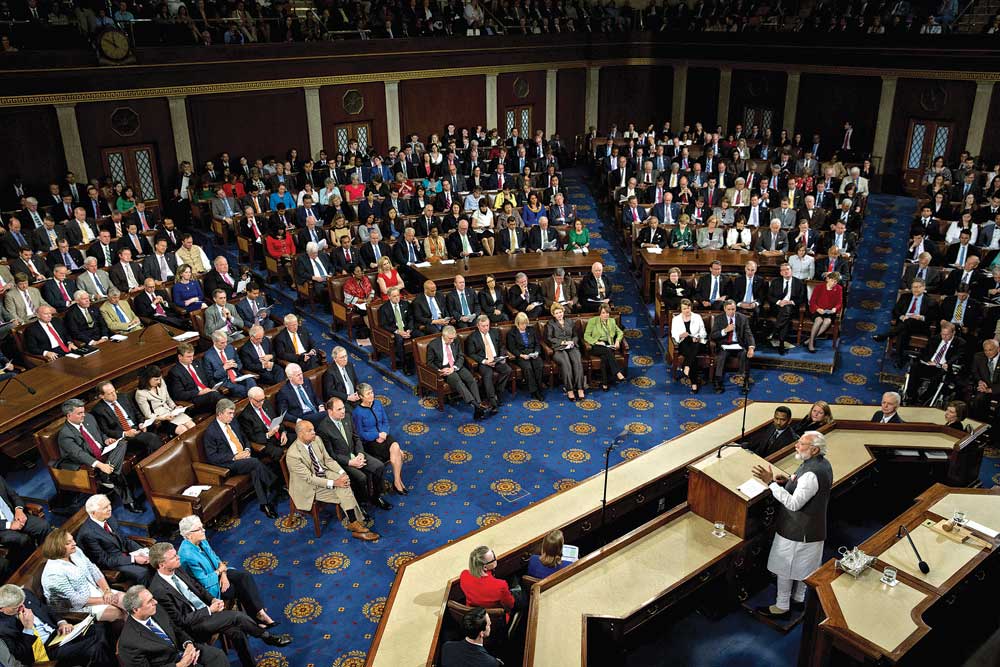 EVEN BY THE fanfare that usually greets Indian prime ministers in Washington DC now, there was something different about Narendra Modi’s recent visit to the US. For example, there was a standard— and lengthy—joint statement issued that dealt with subjects as diverse as military cooperation and climate change, even yoga. Effusive statements of affection between the two countries followed, and to cap the occasion, a much-hailed address by the Prime Minister to a joint meeting of the US Congress.

In India and elsewhere, this has been interpreted as proof of New Delhi’s ‘alliance’ with Washington. Critics point to the recently signed Logistics Exchange Memorandum of Agreement (LEMOA) as a smoking gun that shows India and the US are now ‘neck deep’ in a military pact of some kind. It has also been pointed out that India did not sign the LEMOA for almost a decade under the erstwhile UPA regime for fear of destabilising India’s traditional policy of non-alignment. Has India indeed forged an alliance with the US? Or are these fears overblown?

“Modi is merely continuing the pro-US ‘tilt’ in Indian foreign policy that began under Atal Bihari Vajpayee and was formalised under Manmohan Singh through the defence framework accord and the nuclear deal. Similarly, Modi is continuing with Singh’s China-appeasement policy—seeking better political relations while allowing China to make the bilateral trade increasingly lopsided. Modi’s Pakistan policy, with its periodic U-turns, also mirrors the policy of his predecessor,” says Brahma Chellaney, professor of strategic studies at the Centre for Policy Research, while hinting at a more complex state of affairs.

Another observer of India’s foreign policy-making process, Rajesh Rajagopalan, a professor of international relations at Jawaharlal Nehru University, has a similar interpretation. “Much of this is incremental change,” he says, “There is a lot of talk when leaders go there. But subsequently, there is some pullback when they come back to India. Obviously, there is some exaggeration when such visits take place. But nevertheless, some of the things included in the joint statement, especially on defence matters, are interesting.”

But even if one separates the ‘optics’ of Modi’s successful visit from its substance, something is changing in India-US relations. One, there is far more clarity and openness in forging better relations than in the past. The Logistics agreement is just one example. In recent years, military-to-military ties have grown stronger than ever before. India has not only inked more defence purchase deals with the US in recent years but also increased the tempo of military exchanges—joint and multilateral training exercises and visits—with the country.

Two, unlike other Indian leaders, Modi is much more willing to accept ideas such as climate change mitigation—in exchange for technological help to meet India’s energy needs. This is something to which the US has warmed. The new momentum in building nuclear energy plants—the unfulfilled promise of the 2005 civilian nuclear energy agreement—is a sign of progress on this front. This was evident in the Joint Statement issued on 7 June: ‘The United States and India share common climate and clean energy interests and are close partners in the fight against climate change. Leadership from both countries helped galvanize global action to combat climate change and culminated in the historic Paris Agreement reached last December. Both countries are committed to working together and with others to promote full implementation of the Paris Agreement to address the urgent threats posed by climate change. India and the United States recognize the urgency of climate change and share the goal of enabling entry into force of the Paris Agreement as early as possible.’

Three, and most importantly, India’s outreach to the US assumes another dimension in the context of China’s recent aggressive behaviour on India’s borders and elsewhere (such as the South China Sea). This not only worries New Delhi and Washington, but has also led to alarm across Southeast Asia.

None of these matters—India’s keenness and US reciprocity— should be seen in isolation. Otherwise the contemporary reality will seem more like that of Indian supplication and American benevolence in what is a relationship that has matured over the past half century. Are there deeper forces that are shaping the equation beyond mere transactional dealings? Is India effecting a fundamental shift from its traditional policy of balanced ties with different countries that include US rivals such as Russia and China?

From the Indian perspective, there are two issues to consider: are there inherent risks in deepening relations with the US, and what happens to the idea of non-alignment that has for long been the cornerstone of Indian foreign policy? The two themes are interlinked. “Indian strategic culture is intrinsically anti-American and we haven’t entirely got over it. Even when the US is offering things that are good, such as the Indo-US civilian nuclear agreement, and changing global nuclear rules (the India-specific waiver for nuclear trade at the Nuclear Suppliers Group in 2008), we seem to be suspicious of its intentions,” says Rajagopalan.

here is now far more clarity and openness in forging better relations with the US than in the past.

Much of this has to do with how India imagined its role in the world and crafted its foreign policy soon after it gained Independence. Two related factors ensured that India would continue to view the US and Western countries with suspicion for a long time. On the one hand, Indian leaders had a healthy scepticism of Western economic ideas, shaped in part by a long spell of colonialism. On the other hand, getting the ‘best deal’ in a world divided during the Cold War era between two rival camps—the US and the Soviet Union—required carefully skirting one’s way around the two. In retrospect, India did pretty well at that time by playing one camp against the other. India was not operating alone in this manner. This approach of not being part of one or the other bloc led to the Non-Aligned Movement (NAM). Non- alignment was, in other words, a policy that had risk-reduction at its core.“That idea, non-alignment or its successor— non-alignment 2.0 as some analysts dub it—will not work in this age. For one, the world had changed significantly. For another, bipolarity has disappeared with the disintegration of the Soviet Union. So we can’t play that game [of pitting the two rival camps against each other],” adds Rajagopalan. “Then there is the question of ‘non-alignment to what end?’ Unlike the Cold War, where the two rivals were distant and neither was antagonistic to India, now one is a neighbour (China). It makes no sense to have non-alignment now.”

What India is currently experiencing is a long transition where events have moved ahead of ideas. Successive Indian prime ministers—from PV Narasimha Rao to Narendra Modi—have invested a vast amount of political capital in building closer ties with the US. India’s strategic community, in contrast, has remained wedded to the old—ideological—idea of NAM. It makes great sense to think about risk-management while crafting a foreign policy. What does not make sense is holding on to an idea that is long past its shelf-life. Yet, it is also true that ideology has never really come in the way of clear-sighted thinking in pursuing better relations. This may sound strange given the history of bitterness and suspicion verging on hostility between India and the US. But at least one analyst, who has delved into the archives to understand the twists and turns in bilateral relations, thinks the US has always preferred to build a stronger relationship with India over Pakistan. China and Communism have always loomed large in this story but have not been exclusive factors. There are interesting echoes between what happened in the 1960s and the 21st century developments between the two countries.

Modi is willing to accept ideas such as climate change mitigation in exchange for tech to help meet India’s energy needs.

As Evan Braden Montgomery, a senior fellow at the Center for Strategic and Budgetary Assessments, a think-tank in Washington, tells Open,“The comparison that struck me was a slightly different one—namely, US efforts to build closer ties with India in the early 1960s and the early-to-mid 2000s, which show remarkable similarities. Many of the arguments that were made by US officials in the aftermath of the Sino-India border war in 1962 that India was a rising power with considerable potential, was more important from a geopolitical perspective than Pakistan, and had much in common with the United States, were echoed by US policymakers and commentators a decade ago. And I continue to see strong similarities between the situation in the first half of the 1960s and the situation today. Then, as now, the United States was concerned about China, frustrated with Pakistan, and optimistic about India.” Montgomery, who has studied how great powers behave with emerging powers, has sketched a tantalising history of how India and the US would have become partners way back in the 1960s, but for India’s incomplete ‘power shift’—its inability to hold sway in South Asia—at that time. When that shift did occur in 1971, the US turned antagonistic, basing its decisions on a mix of the risks involved in a conflagration in the region and the oversized role of the personalities involved—Richard Nixon, Henry Kissinger and Indira Gandhi.

What about now? Is the situation any clearer?

“I think it’s important to note that US efforts to forge closer ties with India, whether in the 1960s or more recently, have generally been pursued with a relatively long-term perspective in mind. The goal has not been to find an ally right away, but rather to build a partnership over time. From that perspective, the situation is clearly more favourable now than it was then,” says Montgomery.

Indian and US leaders have repeatedly made it clear that ties between the two countries should not be considered a zero- sum-game vis-à-vis relations with other countries, be it China or Pakistan. This is also clear from how the US has approached the issue, historically and in contemporary terms as well. Today, few remember John Kenneth Galbraith’s role in bringing the US and India closer, especially while he was the US Ambassador in Delhi. Fewer still have heard of Robert Komer and Phillips Talbot—the two officials in the John F Kennedy administration who worked tirelessly behind the scenes to push for Indian primacy in South Asia. Less than a decade later, no less than Henry Kissinger—Secretary of State under the Richard Nixon administration and the villain of many an Indian story—tried to champion the Indian cause. (Soon after India exploded its first nuclear device in 1974, Kissinger ordered that America’s response to India be ‘low key’).

Those efforts, while they did not pay off then—the history of hesitations was in overdrive—did pave the way for much better and closer ties in the 21st century. Modi’s visit and its success have much to do with another hidden—but positive—history that did not display any hesitation.