Hate Wave in the Valley: Return to the Stone Age

in the wake of a killing 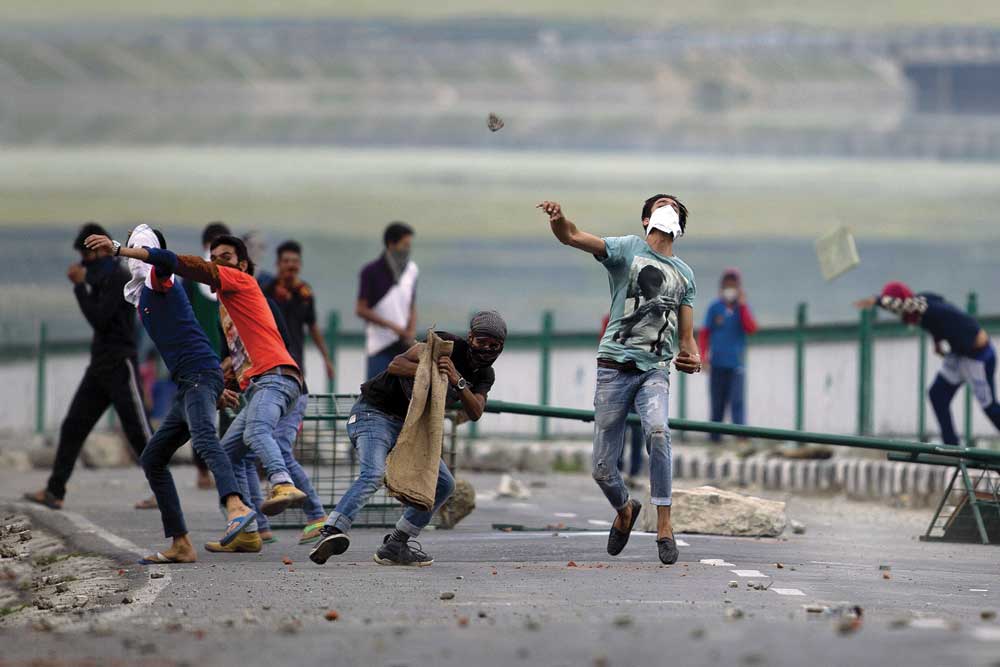 The day before Burhan Muzaffar Wani, a 21-year-old Hizbul Mujahideen commander, was killed, Kashmir marked a joyful Eid. Extended celebrations were still on when news of the encounter began to spread. It was at 4.30 pm on 8 July that he was shot dead and the government made the announcement at 9 that night. Much before that, WhatsApp messages had begun to circulate, citing his ‘shahadat’ or martyrdom. Events moved too fast after that for security forces to react. Even before they could put up barricades in sensitive areas, the youth were on the streets protesting, and in an instant, Kashmir was on the boil once again. Within four days, 33 people had been killed in clashes with security forces. More than 1,500 lie injured in hospitals across the state. Curfew has been imposed on all of South Kashmir and around eight police stations of Srinagar.

Wani was a resident of Tral in South Kashmir’s Pulwama district. Despite a curfew, thousands of people gathered at his home to participate in the funeral. By 9 July, the streets of Tral were jammed, mainly with youths who had come from all over Kashmir. Stone pelting and snatching of arms from security forces gathered momentum after the burial. A vicious cycle had begun in which deaths by police firing drew even more people onto the streets. Appeals for peace by the government were lost on the protestors. “I have never seen such fury among our boys, who are so willing to die,” says Idhries Ahmed, a government official from Court Road near Lal Chowk in Srinagar.

There is heavy police deployment as we take the road from Lal Chowk towards Tengpora. Closed shops, roads deserted barring one or two vehicles, mostly ambulances, are all that are visible. Every 100 metres, there are armoured police vehicles with two guns on top. As we approach the city’s Chatabal area, a protest is going on. Some youths are burning tyres to cut off the road from both ends. The vehicles ahead of us stop and take a U-turn to avoid trouble. We decide to get off our vehicle and move ahead to talk to the protestors. Three youths on a motorbike shout slogans: “Bharat teri maut aayi, Lashkar aayi Lashkar aayi.” (India, your death has come, here comes the Lashkar)’. They speed away towards the highway. We meet 23-year-old Mukhtar Ahmed Bhat, a plumber, who is among the protestors. “We have been exploited for long. Now this battle will last till we get azaadi from India,” he says. “Our brother Burhan started it, and it is our duty to fulfil his dreams.”

We can hear ‘Al Jihad Al Jihad’ on loudspeakers from the nearby mosque. “This is jihadi taqreer we play throughout the day,” says 27-year-old Mehraaj Dinagari. “We download it from the internet and play it in the mosque. It encourages us in the fight for freedom.” The young men readily accept that they throw stones at police and paramilitary forces. “The worst they can do is kill us. We are ready for that,” says 24-year-old Aadil Shah, an embroidery artist whose work has been disrupted by the curfew. “My family’s suffering is nothing compared to what the state is suffering today.”

This is not killing, this is murder. My son was chased from home to the streets and killed. He was the only earning member, what do we do now?

We go through the melee to reach Tengpora, Batamaloo. Shabir Ahmad Mir, a local boy, has been killed in police firing on 10 July. We are stopped a number of times both by the police and protestors. The police ask us to go back, the protestors sometimes turn violent, angry at the national media for its projection of the events in Kashmir. “For you, all of us are terrorists. Please go back and don’t test our patience,” says a protestor on the town’s main road.

At Tengpora, which looks like a village, big boulders and wooden planks block the streets at different places. Often, we get down from our vehicle to remove obstacles and proceed. People gathered at every turn look at us with suspicion. We see huge drums on the sides filled with bricks that can be used to throw at police vehicles if they enter the area. Finally, we reach Shabir Ahmad Mir’s home. “This is not killing, this is murder,” says Abdul Rehman Mir, Shabir’s father, “My son was chased from home to the streets and killed by them.” He shows a bullet and a tear gas shell used by the police. “It was not the CRPF. It was J&K Police. They are harsher to us than Indian security forces. My son was innocent and never engaged in stone pelting. Still they killed him.” Open tried to get a version of the events that led to Mir’s death from the police at Batamaloo, but they refused to comment.

The J&K Police being hated more than the CRPF is a recurring story. Mazid Hussain Wani, a 25-year-old from Pulwama, was on his way to offer namaaz-e-janaza for one of the boys killed in police firing when he was stopped by CRPF men who allowed him to go for the prayers. “When I moved ahead, the J&K Police shot me without asking anything,” he says, lying in the emergency ward of SMHS Hospital, Srinagar, with a bullet in his stomach and lower waist. There are many like him in hospitals across the state. ‘Bullet or pellet?’ is all that people ask each other in the hospital, where more than 200 of the injured have been admitted. Gul Mohiuddin, 25, has severe pellet injuries in his stomach. There is also a four- year-old girl, Zohra, from Kamarwani Chowk with pellet injuries on her head. “When I was coming out of my house, police uncle fired at me,” she says. Taushim Ahmad from Khanyar, whose brother was shot with pellets, says, “The paramilitary forces are not inhuman like our own people in the police.”

THE STORY OF Burhan Wani has an inbuilt appeal to it because of his age and attitude. A bright student who scored more than 90 per cent in his Class X examinations, Wani joined the Hizbul in 2010 when he was just 16 and quickly rose to become a commander in two years. He used modern communication tools, especially social media. Two years ago, he circulated a video in which he posed with other colleagues in combat fatigues holding AK 47 rifles. An icon for disaffected Kashmiri youths, he connected with them through video messages widely circulated on WhatsApp. “Kashmiris had stopped joining the mujahideens in the late 90s and 2000s. The fight here was mostly by terrorists from Pakistan,” says a senior police officer. “But Burhan has definitely encouraged several others to cross the line.” Under Wani’s influence, say the police, more than 50 youngsters from South Kashmir joined militancy in 2015.

For the last 15 years, the fight was mostly by terrorists from Pakistan, but under Burhan Wani’s influence, over 50 youth joined militancy in 2015

In the Court Road area of Lal Chowk, the walls are replete with messages written in homage to Wani. ‘AK 47 Burhan still alive’; ‘Leader of resistance Burhan’; ‘Burhan our hero’; and ‘The lion no more, today we mourn’ are some messages painted on shop shutters. “He took up the gun very early for freedom and was martyred at this young age,” says Dawood Ahmad, 23, an MBA student and one among a group of friends who spray such graffiti at night. “We are holding a peaceful protest here through slogans and posters against the killing of Burhan. He could have been arrested.”

Politicians too are fishing in troubled waters. Former J&K Chief Minister and Leader of the Opposition Omar Abdullah wrote on Twitter soon after Wani’s killing: ‘Mark my words —Burhan’s ability to recruit in to militancy from the grave will far outstrip anything he could have done on social media.’

Attempts are also being made to compare him with Maqbool Bhat, who was hanged in Tihar jail in February 1984 and became an icon after that. Bhat’s hanging came under dramatic circumstances. Jammu & Kashmir Liberation Front members had kidnapped UK-based Indian diplomat Ravindra Mhatre, demanding Bhat’s release as ransom. They subsequently killed Mhatre; five days later, Bhat was hanged. He had not been very popular before his death, but later became a symbol among Kashmiris with a sense of alienation from India. He was buried in Tihar, but a grave in Srinagar has been kept vacant as a mark of respect to him.

But the political situation is different now, and Kashmir is no longer the anarchic terror-ridden state it once was. Most people here say they want peace and development.

What is striking about this episode is how helpless the state government has seemed in handling the situation. No MLA or minister visited any of the violence-affected areas. It took the Central Government to act quickly to restore peace. Home Minister Rajnath Singh made a call to Congress President Sonia Gandhi on 11 July and she immediately appealed for peace in Kashmir. National Security Adviser Ajit Doval cut short his trip to Africa with the Prime Minister and reached Delhi to attend a high-level meeting called by the Home Minister. Modi himself is keeping a close watch on the situation. In some parts of Srinagar, the situation is under control, but far from normal. South Kashmir is still burning. “To say that we didn’t do anything is wrong,” says Naeem Akhtar, education minister and a J&K government spokesperson. “We are trying our best to control the situation with minimum collateral damage. But people should not take agitation to such a level that forces are forced to open fire.” Additional Director General of Police (CID) SM Sahai says that the police are mostly using non-lethal weaponry to prevent loss of lives. “The mob at Damhal Hanjipora police station looted weaponry from that station while putting it to flames. Those weapons were used against our forces. Three of our policemen are still missing,” he says. He says that except for certain pockets, the situation is coming back to normal in the state.

Such street eruptions are not new in Kashmir. The state saw similar civil unrest in 2008 and 2010, outbreaks that left more than 100 people dead. Calm, it is hoped, will return soon. But images of thousands attending the funeral of a terrorist suggest a failure of government machinery. “This call for azaadi, which was earlier limited to certain parts, is now coming from everywhere. This is the most worrying aspect of the current unrest,” says a senior police officer. We could hear songs of jihad and azaadi from the public address system of mosques. Calls were also being made for the donation of blood for ‘Kashmiri brothers’ in hospitals and for food arrangements to help those affected. It is this radicalised solidarity that needs to be looked at. More than a battle on the streets, it is a political battle for the NDA Government in Delhi.