What is it that unites the four states? It’s more than the changing idea of welfarism 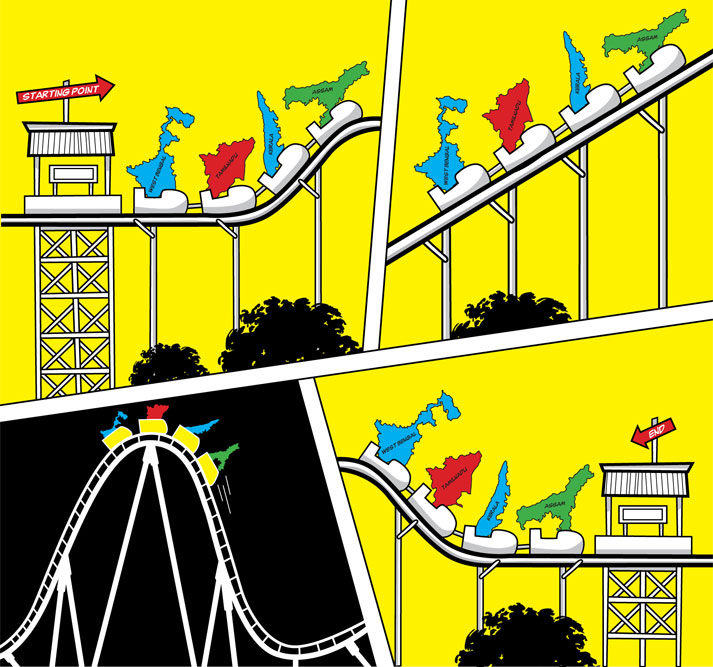 BY ALL APPEARANCES, the elections in Assam, West Bengal, Tamil Nadu, Kerala, and the Union Territory of Puducherry are normal events. Since 1971, when Parliamentary and state Assembly elections went out of sync, there have been elections in some or the other Indian state. For the most part, the mix of states that see elections is random. Located in two extremities of India, with different languages and very different social and economic profiles, it seems nothing more than a matter of chance that these four states (if one leaves Puducherry out) are being bunched together in an electoral arena.

There is much that is common among the four states. Take, for example, poverty. If one leaves out Assam—in many ways an outlier among many Indian states—these states have fewer poor than the all-India figure and among major states, Kerala is one of the better performers on this score. When it comes to inequality, once again the picture is interesting. This time Kerala is an outlier: it has the highest level of rural and urban income inequality among all Indian states. The other three states are bunched close to each other. Kerala’s high income inequality has to do with its rich having more than anything with poverty. Finally, all four states have a degree of commitment to welfarism that has strong historic roots, one that has not been seen in most major states.

Hard as it may seem to believe, the socio-economic profile of these states has much to do with their similar politics. In many ways, these states are pioneers of the politics of ‘social justice’ that is being paved—with uneven success and turbulent politics—in other parts of India.

In the 1990s, soon after India began its journey of economic liberalisation, political scientists began asking questions about the similarities and differences between states when it came to economic performance. Most of these queries were about how and why states had a very different record in reducing poverty. In one answer, John Harriss—a political scientist at Simon Fraser University in Canada—classed key Indian states into four types. Kerala, West Bengal and Tamil Nadu fall in a class where political mobilisation of poor persons and disadvantaged castes is strong and where the Congress party lost its dominance much earlier than in other states. The result was these ‘islands of stability’ where, irrespective of the party in power, the degree of commitment to social sector spending—on education, healthcare and provision of food for the poor—did not waver.

The socio-economic profile of these states has much to do with their similar politics. They are pioneers of the politics of ‘social justice’ that is being paved, with uneven success, in other parts of India

This is particularly true of Kerala and Tamil Nadu in recent years. West Bengal, though ruled by a chief minister of a very populist bent of mind, has been restrained in spending money due to the tough financial position it finds itself in. In the last six months in Tamil Nadu, chief minister J Jayalalithaa has announced scores of schemes totalling thousands of crores of rupees for building houses for the poor, rural roads and help for farmers. This is over and above the well-oiled public distribution system (PDS) in the state that no party—DMK or the AIADMK—allows to go into disrepair. This kind of welfarism— largely handled by government machinery—has now reached a saturation point. Increasingly, even apolitical matters are now attractive for political parties. Last year, under yet another populist scheme, ‘Amma Cement’ was offered on concessional rates for poor people building homes. Priced at Rs 190—Rs 100 cheaper than the market rate—the poor could avail up to 750 subsidised bags of cement. More dubiously, flood relief material meant to aid those suffering from the recent devastating floods in Chennai was branded as ‘aid from AIADMK’.

In all these states, Assam included, cheap rice is a normal fact of life. All four boast an above average performing PDS, something that populous states such as Bihar and Uttar Pradesh can only dream of.

This is one side of the equation; the other side is the state’s own tax revenue—basically its own effort to earn enough to meet its expenditure. Again, all three are in the same boat, with Tamil Nadu—because of its relatively greater industrialisation—faring a bit better. Kerala and West Bengal had barely 5 to 5.5 per cent of their own tax revenue during these years. Market borrowings, loans and assistance from the Union Government made up a big chunk of their spending requirements. And such spending is not solely for ‘developmental’ purposes only. In Kerala, for example, the pensions bill is rising (and will rise further as the demographic profile of the state changes in the years and decades ahead). In other states in the group, too, committed expenditures—ones in which there is no way out except to pay the bills that land on the government’s desk—leave little room for manoeuvre.

This election is a big opportunity for these four states, in particular West Bengal and Kerala, to break their fiscal shackles and invest a greater share of their resources for economic growth

Every Assembly election, and its result, is an opportunity for change for a state. At one level this is no more than a platitude. Unlike previous occasions, there are two factors that put these states on a cusp during this election season. One, beginning last year (2015-16), the Union government began a process of devolving a historically larger share of tax proceeds to states. Based on the recommendations of the 14th Finance Commission for the next five years, until 2019-20, states will get 42 per cent of the divisible pool of taxes. This is ten percentage points higher than what the previous Finance Commission had recommended. This is a big opportunity for these four states— in particular West Bengal and Kerala—to break their fiscal shackles and invest a greater share of resources for economic growth. There is not a moment to be lost.

There is a second factor at work here. Increasingly, states are competing with each other to woo private investors. Unlike the past when the investment burden lay solely on the shoulders of governments, it is private investment that makes all the difference. This process, however, is not magical. States need to be prepared (and primed) to attract investment. The four states that go to elections in the next few months are underprepared in this respect.

In September 2015, the World Bank released a report, Assessment of State Implementation of Business Reforms, that ranked 32 states and Union Territories on the basis of a 98-point action plan. These rankings mirror the Ease of Business rankings at a global level. Based on scores, states were divided into four groups: Leaders (who had scored more than 75 per cent in implementing reforms); aspiring leaders that scored between 50-75 per cent; acceleration required 25-50 per cent and jumpstart needed 0-25 per cent. None of the four states—Assam, Kerala, Tamil Nadu and West Bengal—figured in the top ten ranks. Worse, West Bengal and Tamil Nadu, with respective scores of 46.9 per cent and 44.58 per cent, figured in the bracket of states that require acceleration in reforms. Kerala and Assam, with respective scores of 22.87 per cent and 14.84 per cent, figure in the last slot of states. Assam’s score (and ranking) is probably understandable: it is a special category state in a geographically disadvantaged part of the country. Most Northeastern states are clustered in rank positions from 22 to 32, with Assam the best performing in this lot.

The 14th Finance Commission award and the need to pull up their business reforms rankings gives these states—in particular West Bengal, Tamil Nadu and Kerala—a unique opportunity to break from the long- run equilibrium of an expensive welfare-state orientation that characterises them. Either these states can use the greater fiscal room for building infrastructure and attract potential investors or they can continue welfarism with greater ease before their long-term fiscal trend catches up with them again. It is rare for such opportunities to present themselves in competitive democracies where the temptation to spend ever more is too great to give up.

There can, of course, be no denying that each of these states has its own particular set of problems. In Assam, security and counterinsurgency has been a concern for the Tarun Gogoi government for almost all the 15 years that it has been in power until the surrender of Arabinda Rajkhowa and Anup Chetia—the two top leaders of the United Liberation Front of Asom (ULFA). In Kerala, the problem is one of the increasing ‘hollowing out’ of its much vaunted ‘model’ of development. Now, high costs, excessive reliance on remittances from residents abroad and the lack of an industrial base stare at the state. West Bengal set on a ruinous course a long time ago—the fiscal malaise is just one part of the problem. In Tamil Nadu, it seems business as usual as two antagonistic political parties vie for power (even as they follow broadly similar policy recipes and solutions) based on nothing more than the personalities of their leaders. These problems may make it appear that there is nothing common among these states. But the unique political and economic circumstances they find themselves in suggests that solutions to these problems lie in a far-sighted, belt-tightening, politics. If only for that reason, it will be interesting to watch the coming elections.