Dalits: Stand up and Be Counted 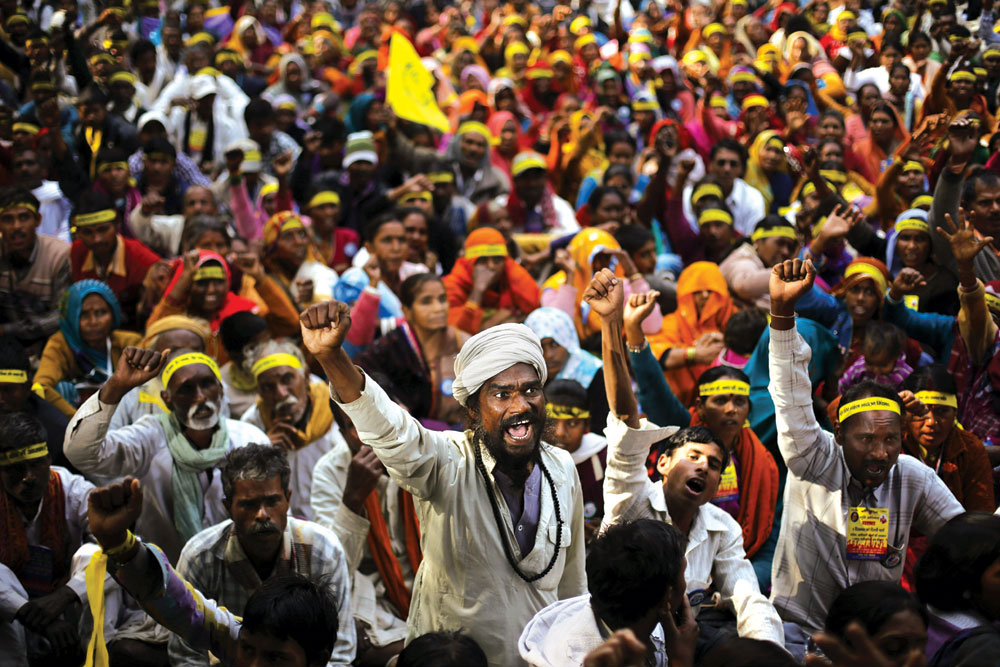 ON 16 JANUARY this year, a huge rally was held at the heart of Kolkata. It was organised by Matua Mahasangha, a religious-cum-political organisation of the Matua community, also called Namasudras, with a sizeable presence in districts bordering Bangladesh. Called Ubastu Samabesh (Refugee Meet), the rally saw large numbers come from different districts. Its timing, with Assembly elections on the anvil, was telling. Matua Maha Sangh has been a guarantor of Dalit votes in West Bengal the last few elections and claims to be able to influence 80 constituencies. Their leader, Notun Ma or Mamata Bala Thakur, a Trinamool Congress MP from Bangaon, says, “In 34 years of the Left rule, we were largely ignored and struggled for basic amenities. Thankfully political parties realise our united strength today and we have been able to assert ourselves to some extent.”

In Tamil Nadu, Viduthalai Chiruthaigal Katchi (VCK), a political party for Dalits, is getting media attention like never before. VCK had aligned with both the leading Dravidian parties DMK and AIADMK in the past but it was largely driven by their opposition towards PMK, a political party dominated by the Vaniyar caste. There has always been caste rivalry between the Vaniyars and Dalits. VCK’s fortune was dependent on who PMK allied with because they were bound to go against it. But their success was limited. In 2011, they contested on 10 seats with not a single win and just 1.5 per cent of the vote share.

This time, VCK under its leader Thol Thirumavalavan is charting its own course. It has joined the People’s Welfare Alliance (PWA), led by MDMK leader Vaiko, along with Left parties. Similar voices are coming out of states like Kerala where mainstream coalitions took Dalits for granted with a use-and-throw policy. Dalit groups across the states going to polls seem to be rethinking their traditional strategies for these elections. They are either leading or becoming part of new political formations for a better say in the scheme of things.

“Dalits have been regularly used by the main political parties for their vested interests. But what we have got in return is for everyone to see. The main parties used to force us to put up candidates on their party symbols. It confused our voters and we couldn’t get the desired results,” says D Ravi Kumar former MLA and VCK general secretary. He says they are getting a huge response, especially from Dalit youths, in the wake of recent incidents of caste atrocities such as the killings of Dalit boys in Haryana and Tamil Nadu and the suicide of Rohith Vemula in Hyderabad University. Kumar claims the VCK will be able to influence more than 84 constituencies out of 234 in Tamil Nadu where the Dalit population ranges from 24 per cent to 44 per cent.

Some political observers believe such expectations from VCK is over-optimistic. Dalit votes often don’t come consolidated to anyone. There is infighting among different Dalit castes. Also AIADMK and DMK indulge heavily in buying votes which impacts Dalit voting patterns.

“It is true that Dalits are trying to affirm themselves in a big way. But the mobilisation is still happening. The problem is that parties like VCK are able to transfer their votes to other alliance partners. But other parties’ votes don’t come to them,” says AR Venkatachalapathy, professor at Madras Institute of Development Studies.

Praskanva Sinharay, a doctoral candidate at the Centre for Studies in Social Sciences Kolkata, believes that in the last decade, the politics of West Bengal has changed. “Apart from the decline of the Left Front, an important emerging trend is the political assertion of oppressed and minorities groups such as Dalits, Muslims and others.” They are challenging the state’s upper-caste dominated Bhadralok politics.

The main contest this time is between TMC and a Congress-Left alliance. In addition there is BJP trying to repeat their 2014 Lok Sabha performance where they saw the vote share jump to 17 per cent, from 4 per cent in the 2011 Assembly elections. West Bengal’s Chief Minister Mamata Banerjee presents her party TMC as a champion of Dalits and is helped in this by the Matua Mahasangha. After the suicide of Vemula in January, she immediately sent a two-member TMC delegation under Rajya Sabha MP Derek O’ Brien to Hyderabad University.

Mamata Thakur has organised several protests on behalf of TMC to highlight Dalit atrocities by the Narendra Modi Government at the Centre. On 5 April, a huge gathering is planned in Thakurnagar, a town 70 km northeast of Kolkata, to mark the birth of Harichand Thakur who started the Matua sect and is almost like a God to them.

They, however, received a setback earlier this year when Manjul Krishna Thakur, a state Cabinet minister and brother-in-law of Mamata Thakur, quit the TMC to join BJP. “Trinamool Congress has done nothing for our community. We will be able to flourish only under the leadership of Narendra Modi. Those who claim to have the complete support of our community would be surprised after the election results,” he says.

BJP could also do well in western districts with a high tribal population. “The issue of local goddesses in the western districts over the traditional gods has always been there. It is only now that BJP is strongly backing them and which might see a tide in the party’s favour,” says Maidul Islam, assistant professor of Political Science at Centre for Studies in Social Sciences, Kolkata.

Islam still feels that the BJP’s impact will be limited in the election. In the 2014 Lok Sabha election, BJP got a large share of anti-Left and anti-TMC votes. He thinks the anti-TMC vote this time will go to Congress and the Left. “We are not fighting on caste lines. People from all sections are fed up of the politics of both Left and TMC. Our agenda is development of the state,” says Siddharth Nath Singh, BJP secretary in-charge of West Bengal.

There is growing unrest about the TMC government’s corruption and BJP hopes to capitalise on the sentiment.

In Kerala, another state that is going to the polls, Dalits are mainly allied with the Left Front but ground realities are changing fast. “Dalits largely feel betrayed by earlier Left Front governments and their political choices are changing. Also, Dalits count for around 11 per cent of the total votes and that is a reason mainstream parties don’t pay attention to them at the cost of other powerful sections of the society,” says Robbin Jeffrey, visiting professor, Institute of South Asian Studies, Singapore, who has been a long time observer of Kerala politics.

Elections in Kerala traditionally revolve between two major fronts headed by Congress and Left but BJP is trying hard to gain ground here too. This time round, they are not looking to win, just to mark a presence in a state where they are yet to open an account. Immediately after the Lok Sabha polls, its national leadership began working to bring little-known Hindu caste organisations under its umbrella, promising them the political recognition that had eluded them so far. Some of these BJP new allies include Bhartiya Dharma Jana Sena (BDJS), stemming from Sree Narayana Dharma Paripalana Yogam, an association of the influential Ezhava community. A collaboration with Dalit outfit Kerala Pulayar Maha Sabha (KPMS) is also on the cards. “These are marginalised groups no one has bothered about. We are trying to bring them to the mainstream and offer a partnership in nation building. If you see these are the people who have no land, no jobs and are still struggling for livelihood,” says K Rajashekharan, state BJP president. The Pulaya community has so far been a strong Left supporter. “BJP is really trying hard and it would be interesting to see if they get real success in attracting them,” says Jeffrey.

The churning before these elections is expected to help Dalits in making their presence felt. “The empowerment may not happen like UP or Bihar where they have popular leadership and sizeable vote shares, There is still a long walk for them in southern states. But definitely they are moving in the right direction,” says Badri Narayan, professor at School of Social Sciences, Jawaharlal Nehru University.