After Bihar: Be the Master and Skip the House 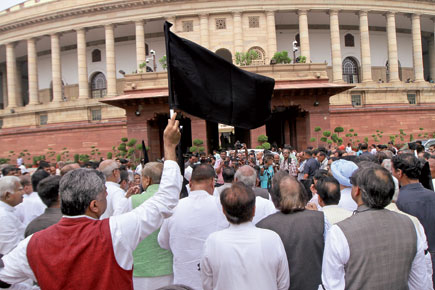 Two days before his party’s electoral disaster in Bihar, Prime Minister Narendra Modi told an audience of economists and policymakers at the Delhi Economics Conclave that, “reforms are not the end, they are just a small path on the long road. Our aim is reforming to transform. Reforms are a marathon and not a sprint.”

Barely 48 hours later, there is plenty of scepticism that the marathon the PM hinted at may turn into a hobbled walk, derailing India’s economic prospects for the coming years. It is not hard to guess why this is so. For one, in all likelihood, an emboldened opposition will not let any important economic legislation pass in the Rajya Sabha. The Goods and Services Tax (GST)—which aims at creating a single national market in the country—is an example. The GST requires a Constitutional amendment and that is unlikely in the political atmosphere that will only get charged further. The contentious Bill to undo the damage caused by the 2013 land law is another example. After repeated promulgation of ordinances, the Union Government finally relented and now the ball is in the court of states where individual laws may be passed.

Is this the end of the reforms agenda of this government and will India go back to the path of muddling along seen some years ago?

Opinion among private sector economists is divided on the matter. Two days before the results were declared, the Asia chief economist of Deutsche Bank, Taimur Beg, almost declared the Bihar result as ‘irrelevant.’ In a note he wrote that, ‘The central Government already has control over a large number of India’s prosperous, business friendly states, its agenda for promoting investment and reforms have not been, and will not be, hampered by the outcome of the state assembly elections. In the coming months and years, the government will have ample space to attract investment and demonstrate its reform orientation; no credit or blame can be attributed to Bihar as far as such endeavors are concerned.’

Beg also noted that Bihar accounts for less than seven per cent of the seats in the Rajya Sabha and the impact of the election on the composition of the upper house will be marginal.

This, however, is a long-term political economy issue. Since 1971, the de-synchronisation of Lok Sabha and state assembly elections has, over time, led to a mismatch between the composition of the Lok Sabha and the Rajya Sabha. Very often, the lower house is dominated by one party and the upper house by another. The problem has, however, become acute in the last 15-odd years and the 2014 general election has ensured probably the sharpest gap in the strength of the ruling party between the two houses.

“Holding elections to the state assemblies and the Lok Sabha simultaneously or within a six-month window would be very beneficial for the country. But that is a long-term reform,” says V Anantha Nageswaran, a co-founder of Takshishila Institution, a think tank that looks at public policy issues closely.

So in the absence of an appropriate legislative environment, is all lost for the National Democratic Alliance (NDA) government’s economic reforms drive? Not quite.

“I think there has been excessive focus on the legislative side and too much attention has been paid to the government’s failures to push the land Bill and the Constitutional amendment required to get GST going. The government can do plenty on its own without recourse to Parliament. For example, the banking sector needs a lot of attention to get it back on the rails,” a fund manager with a foreign institutional investor (FII) told Open.

There are two broad areas where the Government can do a lot to impart a strong impetus to the economy without worrying about parliamentary approval. One, improving service delivery and changing the architecture of social sector spending; Two, fix the mess in the banking sector. This may sound as setting the bar too low. But the fact is that if problem one is fixed, the danger of mounting, and leaky, expenditures leading to galloping fiscal deficits can be tamed. In the second term of the United Progressive Alliance (UPA), this problem acquired such a dimension that it led to acute macroeconomic imbalances. On the one hand, the government could not reduce spending for political reasons and on the other hand, the Reserve Bank of India could not reduce interest rates due to continuous inflationary pressures.

So, far, this has been a mixed bag, with the Government making a promising start in the first while taking only incremental steps in the second. It is the mess in the banking system that the Government ought to devote attention to. Unless this is done, India’s medium-term growth prospect will remain where it is: promising.

At the end of March this year, the stressed assets ratio—gross non-performing assets plus restructured standard advances to gross advances—for the entire Indian banking system stood at 11.1 per cent, rising from 10 per cent in financial year 2013-14. This figure is expected to reduce only slowly and in a 2 November report Fitch ratings expected this to come down marginally to 10.9 per cent by the end of March 2016. At 13.5 per cent, this ratio is alarmingly higher for government-owned banks. This is three times that of the private banks’ average of 4.6 per cent. This is a huge drag on the Indian economy. In 2014 -15, Indian banks’ loans grew by 9.7 per cent in contrast to 15 per cent as compared with 15 per cent in 2013-14, the slowest increase in a decade. That is not all, government-owned banks account for 90 per cent of the stressed assets. The process of recovering non-performing loans and cleaning up banks’ books is always slow and painful. But unless this is speeded up, bank lending is unlikely to pick up to the level required for faster economic growth.

One way to get out of this logjam is for banks to undertake debt restructuring schemes. While this route was used wantonly to restructure debt in the past, the process slowed down drastically after March 2015 due to a tightening of regulatory screws. There is, however, a strong case for a government-regulated, sector-by-sector, cleaning up. The process, however, is fraught with danger. For example, there is ample scope for cronyism creeping during the clean-up. If big companies in a sector have borrowed carelessly, they should not be bailed out. Similarly, government-owned banks ought to be graded according to their financial health and the weaker ones being slowly wound up. So far, not much has been done in spite of the promises made in the Budget.

In one sector at least, the government has made a partial move towards cleaning the Augean Stables. On 5 November, the Union Cabinet cleared a plan for the financial turnaround of power distribution companies (DISCOMs) in different states. The power sector is probably one of the most stressed in the group that includes infrastructure and steel. At the end of March this year, the losses and the debt of DISCOMs stood at Rs 8.1 lakh crore, much of which is owed to various banks in the country. Under the revival plan, state governments will take over 75 per cent of DISCOM debts by 2016-17. More controversially, the Union Government will not include the debt taken over by the states in computing their fiscal deficit. In effect, the debt take over will, for this purpose, be considered off the books of states that do so. In turn, states will issue bolds in the market or issue them to banks or financial institutions that hold the debt of the DISCOMs.

The success of the scheme, however, depends on state governments increasing power tariffs to ensure that the gap between the cost of generating power and the cost of its supply is minimized. Unless this is done, this will be just another power sector bailout scheme that has to be repeated—at the cost of banks and the taxpayer—every now and then when DISCOMs run out of money. But such is the state of the DISCOMs—and the banking sector in general—that the Government has to begin somewhere. The open question, however, is how the Union Government will ensure that states’ don’t go back to their financially reckless ways.

The one area where the Government is on the right track— in spite of opposition from activists of various stripes and some setbacks in the apex court—is the rolling out of the trinity of Jan Dhan Yojna, Aadhar and Mobile (JAM). Combining these three not only promises to deliver benefits directly to those they are meant for but also potentially reduce government expenditure to a level where it is not economically ruinous. It will also free up the fiscal space for other, more pressing, expenditures such as public investment in agriculture and elsewhere.

All this is well-known. What has changed now is that India has the ecosystem that is ready for JAM to take-off. For one, more than 900 million Indians have been enrolled under Aadhar, creating sufficient ‘depth’; for another the number of Indians with bank accounts and mobile phones has gone up dramatically over time, making it possible for cutting out the fat layer of intermediaries who cream-off a whole lot of government money in any social sector scheme. And private sector economists concur.

“The Government seems focused on using the JAM trinity platform for improving service delivery. The beauty of this reform is that it dwells on the strengths of the Bharatiya Janata Party Government. It does not need a Rajya Sabha majority per se. In fact it is largely independent of the legislative system. Most ground work has been done and we have reached critical mass. Around 930 million Aadhar numbers have already been given and likely to reach the one billion mark by mid-2016, 190 million new bank accounts with Rupay debit cards have been opened over last 1.5 years, 700 million mobile connections are live and India is likely to have 500 million smart phone users over the next four years. It needs state buy-in, and is getting that as more and more states are realizing its importance—AP, Chhattisgarh, Maharashtra and others are experimenting with Aadhar linked food, LPG, NREGA and pension payments. Lastly, the private sector is using the same platform on the banking front where exciting innovations are taking place,” says Pranjul Bhandari, the chief India economist of HSBC Securities and Capital Markets (India) Private Limited.

A lot depends on how the Government executes these important reforms. Take the issue of the banking system. Unless the bad debts are resolved, bank lending won’t pick up in a significant way, making investment growth by the private sector illusory. But fixing bad debts in a system that is in such a dire shape requires a sector-by-sector resolution. This requires political will and care to ensure that no corrupt practices seep in. Similarly, the JAM plan is a far-reaching reform that has the potential to change the political economy of development in India that will deliver political and policy benefits. Such matters always require care and attention to detail. It is time this Government woke up to the potential of these non-parliamentary reforms. The legislative road can be taken when the climate for that is more suitable.