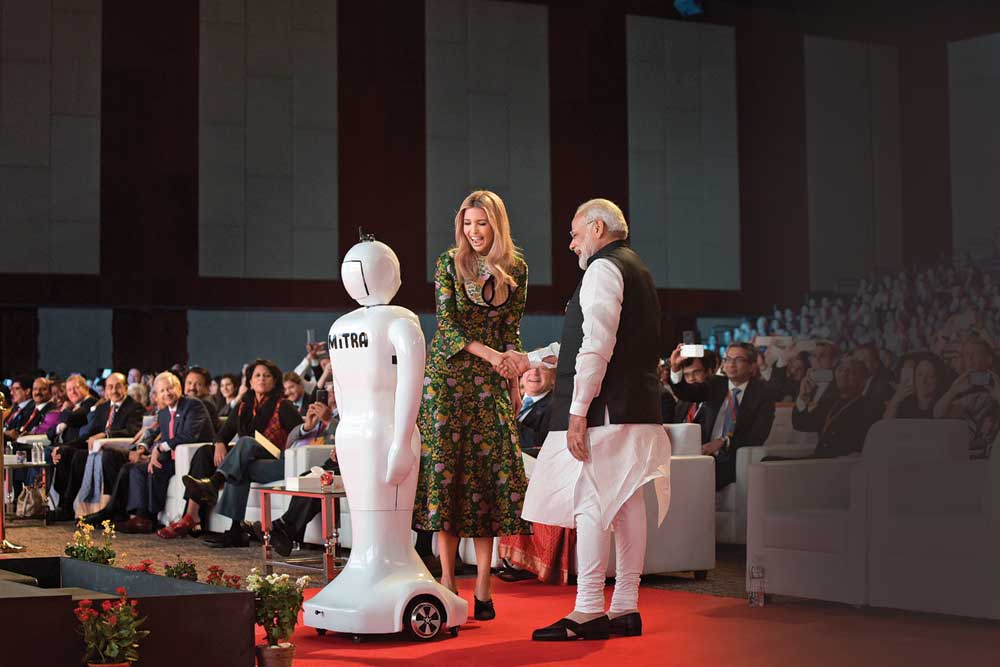 THE CITY OF Hyderabad has always had a thing for strong young women. In the 17th century, it was one such woman who ruled the Qutb Shahi empire without ever ascending the throne. Hayat Bakshi Begum, daughter of Mohammad Quli Qutb Shah, the founder of Hyderabad, and queen regent of the Golconda kingdom after her husband’s untimely death, commissioned monuments, turned family events into big festivals, brokered peace with invading armies, and commanded great respect as Ma Sahiba. Today, another sahiba, albeit a visitor from a foreign land, has stoked Hyderabad’s love of opulence and fantasy. As Ivanka Trump, daughter of and advisor to the President of the United States, waved to Hyderabad in her sensible shoes and a monstrosity of a green dress, before inaugurating the Global Entrepreneurship Summit, she was treated to a welcome befitting Hayat Begum, Empress Cixi, Cersei Lannister and all the powerful women who knew they did not have to be crowned queen to act like one.

Showering Ivanka with gifts of praise and oily veneration was a retinue of nobles, inheritors of the legacy of such high rollers as Mohammad Quli who built the Char Minar and the great city on the southern bank of the Musi river, and a Nizam whose pearls alone could reportedly fill an Olympic-sized swimming pool. The rulers of Hyderabad, it must be said, have never settled for anything less, Telangana Chief Minister K Chandrasekhara Rao’s palatial new bulletproof home in Begumpet being a case in point. And they know how to throw a party. The now-restored Falaknuma Palace, which has wined and dined King George V and Queen Mary, Tsar Nicholas II and King Edward VIII in the past, was the obvious choice for the gala dinner hosted in Ivanka’s honour by Prime Minister Narendra Modi. In the days leading up to her visit, the road to the ‘Mirror of the Sky’, the former home of Mehboob Ali Pasha, the sixth Nizam of Hyderabad, became the most-photographed place in Hyderabad. Fairy lights and LEDs in rainbow colours were wrapped around trees in Christmassy randomness. Dying saplings lining the street magically came back to life. Sidewalks were painted and beggars carted off to newly-sanctioned shelters. A cellular network tower and CCTV cameras were reportedly installed around the property.

“I don’t know who she is, but she is the daughter of an important person, coming from a land so far away. And she is lovely as the moon. We should, of course, welcome her with open hearts, that’s Hyderabadi culture,” says Fari Sultan, 65, a resident of Vattepalli, a neighbourhood near the palace. On the morning of Ivanka’s arrival in the city, Sultan sits outside her two-room shack, deep inside a bylane off the main road, feeding breakfast to her two grandchildren. Some days ago, police searched the homes in this area, she says, for “hushaar logaan (sly characters)”. But she bears no grudges. “If the glory of India can shine as bright as these lights just for these few days, it is worth all the trouble.”

EARLY IN NOVEMBER, when Ivanka delivered a speech at the World Assembly for Women in Japan, The New York Times reported that the turnout was disappointing. She was accompanying her father on his Asia trip. In choosing to go solo in India, Ivanka Trump could not have picked a more felicitous place for her international debut as stateswoman. Like the erstwhile nobles of Hyderabad who had an unbridled passion for all things Western—the Falaknuma Palace was a repository of the finest Italian marble, Florentian leatherwork, Victorian statuary and French champagne—the average Indian today continues to be enamoured of the West. When Bill Clinton visited Hyderabad as President of the United States in 2000, the city, propelled by pride and optimism, had leapt to its feet to tidy up and prepare for the occasion. In young Ivanka, Hyderabad has now found an alluring muse. “She is glamorous and confident. A great face for Indo-US relations,” says Vanita K, a 24-year-old student of Indian history at Osmania University. “Her father may be seen as brash and cruel, but she seems balanced. We need youth like her in Indian business and politics.”

In choosing to go solo in India, Ivanka Trump could not have picked a more felicitous place for her international debut as stateswoman. In Ivanka, Hyderabad has now found an alluring muse

“I wish Ivanka would cast her glance this way,” says Sehda Zehrunnisa, the caretaker of a small shrine named after Bibi Ka Chashma, a holy stream near Falaknuma. Citizens have been chanting this refrain on social media in a parody of the frenzied touch-ups in areas Ivanka is expected to pass by. A visit by Ivanka, they jest, is the one sure way to get the Telangana government to fix potholes in Hyderabad. It is more than a joke to Zehrunnisa, an incredulous spectator in a city en fete. Bibi Ka Chashma lies west of Falaknuma and even shares a wall with the palace grounds. It was supposedly built by Hayat Begum to honour the spring of fertility that had become the centre of an annual fair drawing thousands of pilgrims. It gets few visitors today. “Just yesterday morning, two loads of garbage were cleared from these grounds. The main road, which was riddled with broken dividers, now looks as though made of glass. The clock tower on the western tower of the palace has started to ring in the hours after years. The 5,000-odd people who live in the vicinity never thought all this was possible,” Zehrunnisa says. As night falls, many of them make their way down gullies lit with white and green lanterns ahead of Milad-un-Nabi, and throng the even brighter main road hoping to catch a glimpse of her, a fleeting spark of hope in their dour lives, as her cavalcade whizzes past. They know full well that old Hyderabad, with its oil merchants, paan mahals, tea stalls and keema-roti eateries, cannot be sanitised, not even for Ivanka. But they will do everything in their power to charm her.

Back at the Hyderabad International Conventional Centre on the hilly fringes of the city, Ivanka, too, made an effort to charm the crowd. Visiting India in the full flush of the era of capital at the invitation of Prime Minister Modi, she addressed the women entrepreneurs seated in the hall—over 50 per cent of the 1,500 delegates were women—and acknowledged their struggles. She doffed her hat at Modi for proving that “transformational change” is possible and reiterated that India had a true friend in the White House. She brought up US policies to fuel entrepreneurship in America, which earned her a kudos from Donald Trump on Twitter. Despite the scripted speech, she appeared a woman more complicated than her caricature. It was an amazingly smooth launch, at an event where, like her, everyone—including the state and Central governments, Modi, delegates and the media— had a little at stake beyond promoting entrepreneurship.

Prime Minister Modi had reportedly persuaded former US President Barack Obama to conduct the GES in India this year, and President Trump, upon assuming office, readily agreed. The decision to have his daughter co-host the eighth edition of GES is significant, says Michael Kugelman, the Asia Program Deputy Director and Senior Associate for South Asia at the Woodrow Wilson Center, a Washington-based think-tank. “Unlike most American First Daughters in the past, Ivanka Trump has major clout in the administration. She is not attending the GES as a mere representative of the administration; she is attending as a top advisor. Much of what she sees and hears will likely be reported back to the commander- in-chief,” Kugelman says. “Ivanka is a mysterious mix of charm and power—someone who looks fragile and privileged but shoulders enormous responsibility. The Prime Minister’s presence has added to her aura; she is seen as an aide to POTUS directly impacting policy,” says Meena Kumar, a co-founder of a software firm in Tamil Nadu, on the sidelines of the event, shouting to be heard over the din of a cultural programme in progress.

“I think one should separate the personality and the baggage he or she brings from the cause. The GES will build momentum around promising startups headed by women and that’s what matters,” says Lakshmi Pratury, who co-hosted a two-day conference as a prelude to the GES on November 26-27th in Hyderabad. “GES 2017 is a huge stamp of approval for India, considering the 2016 edition was held in Silicon Valley. It is an opportunity to plug into the global entrepreneurship circuit,” Pratury says. ‘Road to GES’, conducted in Hitex, Hyderabad, along with NITI Aayog and T-HUB, India’s largest startup accelerator, featured over a hundred speakers including Vishal Gondal, CEO and founder of GOQii, a wearable tech company, actors Rana Daggubati and R Madhavan, IBM India Chairperson Vanitha Narayanan, and Karthik Reddy, partner, Blume Ventures. The theme was transformative technology— something that Ivanka underlined in her speech, citing examples from India. “Surprisingly, Ivanka, with her background in real estate, diamonds and fashion, has a good grasp of the start- up ecosystem,” says a venture capitalist who does not want to be named. “Do not judge a book by the cover.”

In her book, The Trump Card: Playing to Win in Work and Life, Ivanka warns readers not to write her off as a celebrity child bankrolled by a billionaire. ‘I’ve chosen to build my career on a foundation built by my father and grandfather, so I can certainly see why an outsider might dismiss my success in our family business as yet another example of nepotism,’ she writes, in a passage that acquires new meaning with her foray into politics. ‘… though those who believe that my success is a result of nepotism might be right, they might also be wrong.’ She is on a journey to prove them wrong.