Old-timers in BSP are disillusioned with Kanshi Ram’s protégé. Do Dalits share their sentiment? Rahul Pandita travels in poll-bound Uttar Pradesh to gauge the depth of dissent against Mayawati 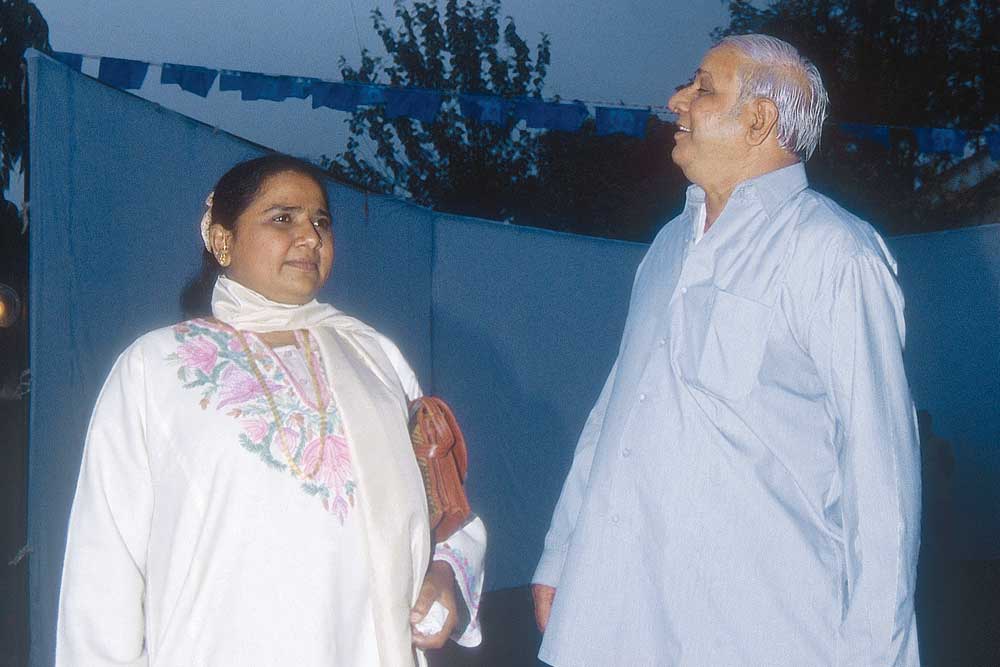 IT WAS MORE than 36 years ago, on April 22th, 1980, that Netrapal Singh Brijwasi met the late Dalit leader Kanshi Ram for the first time. “We knew nothing about him except that people would say ‘another Ambedkar has taken birth’,” he recalls. Kanshi Ram (1934-2006) had come to Mathura, Uttar Pradesh, for “Ambedkar mela on wheels”, an exhibition aimed at creating a visual memory of Dalit icons like BR Ambedkar, Jyotirao Phule and EVR Periyar, and to spread awareness of atrocities committed on Dalits.

From the railway station, Brijwasi remembers, Kanshi Ram and one of his associates called Raame walked up to their local office with a heavy trunk each on their heads that contained the exhibition material. The rickshaw pullers at the station had asked for Rs 20 to carry the travellers and their luggage. Kanshi Ram had so little money that he chose to carry the trunks himself.

The incident left a deep impression on Brijwasi, then in his early twenties. He had been writing since his school days, and made his first speech— replete with his poems—on the occasion. Brijwasi, 59, belongs to the Jatav community, like Kanshi Ram, who had set up an organisation nine years earlier called the SC/ST/OBC Minorities Communities Association (SMCEA) in Pune. By December 1978, the party had 200,000 members and was formally called the Backward and Minority Communities Employees Federation (BAMCEF). According to political analyst Badri Narayan, who has written a biography of the Dalit leader, he created BAMCEF keeping in mind what Ambedkar had said at a conference in Agra in April 1956: “These people for whom I have struggled lifelong are now only concerned in filling up their stomachs.” The Federation’s motto was: ‘Become educated, become consolidated, and struggle.’

For this struggle, Kanshi Ram was always looking for young Dalits like Brijwasi. On the leader’s encouragement, Brijwasi associated himself with BAMCEF. “From that day onwards, I became a permanent fixture at Saheb’s (Kanshi Ram’s) rallies. Whenever he was scheduled to make a speech, I would take the stage before him and galvanise the crowd with my poetry,” he says.

By the time Kanshi Ram launched the Bahujan Samaj Party (BSP) in 1984 to contest elections, Brijwasi had travelled with the leader to hundreds of rallies across the north in Delhi, Punjab, Haryana and UP. Since BAMCEF’s office was in Delhi, Brijwasi too shifted to the capital. “I used to stay with a friend and work as a security guard at a company called Sita Travels,” he says.

Brijwasi moved to Mathura in 1986 where he worked as a court official until he took voluntary retirement in 2013. “From the day I met Kanshi Ram till the 2014 Lok Sabha elections, I did everything for the party, from serving tea to developing poll strategies,” he says. But now he has given up. He says the BSP’s current motto of ‘Sarvajan hitay’ as opposed to Kanshi Ram’s ‘Bahujan hitay’ has defeated the purpose for which the party was created. Not only that, he believes the deviation has been disastrous for the BSP. “If everyone accepted Behenji’s (Mayawati’s) sarvajan (‘every person’) message, then the BSP should have gotten bigger. But now it is not even bahujan (of the ‘masses’). So what good has the new formula done to the party?” he asks.

The Dalit churn after Vemula’s death in Hyderabad and the Una agitation in Gujarat have hurled the community back towards Mayawati. The new Dalit-Muslim axis could also turn in the BSP chief’s favour

Kanshi Ram first came across Mayawati in 1977. She was 21 and taught at a government primary school. She was also studying Law and preparing for the Civil Services. In one of her interviews compiled in 2008 by the Dalit publishing house, Anand Sahitya Sadan, Mayawati recalls that Kanshi Ram had come to hear of her fiery speeches from his BAMCEF associates, and, one late night, he dropped in with a few companions at her house in Budh Nagar in Delhi’s Inderpuri, which had no electricity. It was here that the leader dissuaded her from appearing for the Civil Services and asked her to lead the Dalit community instead.

From that day onwards, Mayawati was groomed for political leadership by Kanshi Ram. By the late 80s, she had become a close confidante of his and her taking over the party’s mantle from him had become certain. She was first elected to the Lok Sabha from Bijnor, Uttar Pradesh, in 1989. The BSP won two other parliament seats as well, getting 2.07 per cent of the national vote.

It was around 1989 that the Bharatiya Janata Party (BJP) also began to assert itself in its resurgent avatar. The party was mobilising lower castes in the name of the Ram temple movement. The first stone of the shilanyas ceremony on November 9th, 1989, for this temple in Ayodhya was laid by a Dalit. Badri Narayan writes that the BJP leader LK Advani’s rath yatra was ‘a clever and successful move since many among the backward castes, including the OBCs and Dalits, were converted to the BJP’s cause and volunteered to help in the construction of the temple.’

As a result of the BJP resurgence, the BSP’s electoral fortunes suffered in the 1991 state elections. In 1993, the BSP formed an alliance with Mulayam Singh Yadav’s Samajwadi Party. But it was to prove short-lived. From 1995 to 2002, the BSP would have three tie-ups with the BJP, each time gaining more politically than its partner.

But it was in 2007, just a few months after Kanshi Ram’s death, that the BSP under Mayawati scored a huge victory in UP after persuading Brahmins and other upper castes to vote for her on the slogan of ‘Sarvajan hitay’. As the slogan of ‘Brahmin shankh bajaayega, haathi (BSP’s symbol) badhta jaayega’ reverberated all over the state, the party secured a single-party majority in the state—the first for any party since 1991.

The BSP’s social engineering and its bid to woo upper castes did not go down well with many Dalit intellectuals. In an article in the Economic and Political Weekly, Anand Teltumbde wrote that ‘there is an intrinsic conceptual error in assuming the BSP as a Dalit party.’ ‘How could there be a Dalit struggle without the definition of its friends and foes? By pushing such issues under the carpet, it actually negates the Dalit struggle itself,’ he opined.

After assuming power in India’s most populous state, Mayawati restricted the filing of cases under SC/ST Prevention of Atrocities Act to rape and murder. According to a survey by the Centre for the Study of Developing Societies (CSDS), the BSP lost 18 per cent of the state’s Dalit votes between 2007 and 2009. In the 2012 Assembly elections, the party lost power to the SP; it fared badly even in constituencies reserved for Dalits, winning only 15 of the 85 such seats.

If everyone accepted Behenji’s sarvajan message, then the BSP should have gotten bigger. But now it is not even bahujan. So what good has the new formula done to the party?

ANANT RAO AKELA was at a meeting where a journalist had asked Kanshi Ram why the BSP wouldn’t take upper castes into its fold. The Dalit leader replied that such an opening up would halt the process of social change. He said that Brahmins and other castes could join at some point, but they could not anchor the party.

Akela was born in Pahadipur village, 22 km away from Aligarh in UP. In 1979, a Yadav friend, Budeo Prasad, took him to a temple where a 72-hour recital of the Ram Charit Manas was taking place. Akela had a good voice and Prasad asked the temple priest, a Yadav himself, to let his friend recite a few pages. “The priest whisperingly asked Prasad about my caste. Upon learning that I was a Jatav, he said I could not read it. When I asked why, he said there was no answer to why and that I just couldn’t be allowed to recite,” says Akela.

A few months later, a minstrel happened to pass through his village, singing songs on Ambedkar and his life. “I had no idea who Ambedkar was, but the story of his struggle brought tears to my eyes. I asked the minstrel where I could find literature on Ambedkar, and he directed me to Lucknow,” says Akela. So he collected Rs 120 from his friends and bought a whole collection of literature on Ambedkar.

It was later that Akela, like Brijwasi, came in touch with Kanshi Ram. The BSP supremo was leading an agitation for prohibition in Bareilly when Akela heard him for the first time. “I was so impressed that I joined him immediately.” Akela decided to devote his life to serving the party’s interests. In 1992, he was placed in charge of the Agra and Aligarh blocks, which had 42 Assembly constituencies. In 2002 and 2007, he served as party president for Koil, a constituency in Aligarh.

The BSP’s complete wipeout in the 2014 General Elections has left many old-timers like Akela convinced that Mayawati has taken the party down a losing path. According to National Election Studies (NES) data, the BSP lost 16 per cent Jatav and 35 per cent other-Dalit votes in 2014 as compared to 2009. In 2014, Mayawati gave 21 Lok Sabha tickets to Brahmins; this was one-third of all tickets, her critics noted, not counting the 17 reserved seats. “The glitter of the diamond in her nose has blinded her,” says Akela.

But BSP watchers say that ‘Sarvajan hitay’ is a practical reality that no Dalit leader can do without. “I think if Kanshi Ram were alive, even he would have done something similar. Or Ambedkar, for that matter. These are compulsions of electoral politics, especially in the context of Uttar Pradesh,” says Badri Narayan.

One factor in Mayawati’s 2014 defeat that analysts point to is the middle-class aspirations of Dalits. “There is a new urban middle- class among Dalits that got influenced by Narendra Modi’s new language. They realised that except turning Uttar Pradesh into a soft, favourable state and installing Ambedkar statues, there was not much Mayawati did for them. So these votes went to the BJP, even from her own caste,” says Narayan. In 2014, 18 per cent of Mayawati’s Jatav caste voted BJP.

But this time, notwithstanding old-timers like Brijwasi and Akela, Narayan feels that Mayawati has managed to cohesively mobilise Dalits once again in UP. The Dalit churn after Rohit Vemula’s death in Hyderabad and the Una agitation in Gujarat have hurled the community back towards Mayawati. The other thing in Mayawati’s favour could be the new Dalit-Muslim axis. After the Muzaffarnagar riots, the state’s Muslims are wary of the Samajwadi Party. The BSP’s strategy, analysts say, is to consolidate the votes of Dalits (21.6 per cent) and Muslims (20 per cent) to secure a victory in the forthcoming state polls. That will not be easy, though. As Narayan puts it: “The BJP will also make efforts to create a big alliance of the remaining Hindu majority against BSP.”

For Akela, however, the battle has to start from scratch. “I never thought that I will have to start this struggle all over again,” he says. But for now, the best bet for Dalits in UP appears to be Behenji.