Between Trump and Xi 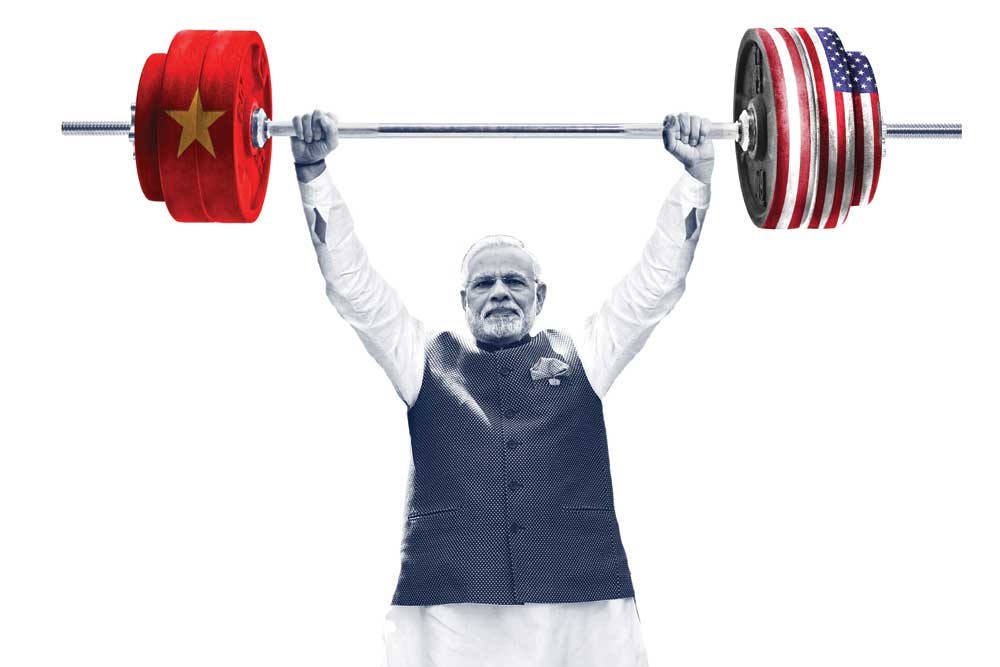 IT DOES NOT take much thought to see that the world is in a flux. An increasingly isolationist US under Donald Trump and an aggressively assertive China under Xi Jinping now mark the two poles of the global order—or disorder if you prefer—with powers like India caught in the middle. In the year ahead, this situation is likely to persist, if not deepen in intensity.

For India, there is no shortage of challenges. In addition to worrying about its place in the world, it has a slew of problems in its neighbourhood. Two lists can be drawn up. One, in which relations with India are now part of the domestic squabbles of the countries in question; and two, those countries with which ties are trapped in a timeless warp. In the first category fall Bangladesh, Sri Lanka and the Maldives. In the second lies Pakistan. Nepal, it can be safely assumed, is moving from the first list to the second in a manner that should be of concern to New Delhi. That leaves Bhutan, a country of much strategic importance that now wants more than mere aid from India.

Every leader who assumes power in Delhi tries very hard to improve relations with Islamabad. By now, it is obvious that in each case, the outcome has been a failure. The gulf that separates what Pakistan wants and what India can offer is so vast that there’s no common ground on which give- and-take can occur. In one line: Pakistan wants Kashmir. India cannot part with it. Period.

Given this situation, it makes little sense to devote precious time and political capital to ‘build relations’ with Islamabad, the noise from Delhi’s voluble ‘strategic community’ notwithstanding. The real cure lies in India’s rising economic power over time. This may appear naïve as Pakistan has spent more than 70 years chasing its dream. But is that really so?

What India ought to devote far greater energy to is its management of ties with countries where domestic politics has assumed a ‘with India or against it’ flavour. Two countries in particular merit careful attention. In the Maldives, the defeat of former President Abdulla Yameen has been greeted with some satisfaction in Delhi. Greater circumspection is called for. This is just one cycle where ‘anti-India’ politicians have been eased out of power; the structural problem of wild swings has not ended. In any case, the government of President Ibrahim Mohamed Solih—who won the country’s presidential election in September— can hardly afford to antagonise China or act overtly against Chinese interests in the Maldives.

In Sri Lanka, India finds itself at the adverse end of its domestic political cycle. Prime Minister Ranil Wickremesinghe has just survived an ouster attempt at the hands of President Maithripala Sirisena after a protracted legal and parliamentary struggle. The old strongman, former President Mahinda Rajapaksa, was sworn in as prime minister and was only ousted after Sri Lankan parliamentarians managed to overcome divisive tactics and blandishments. Had Rajapaksa managed to cling to power, China would have gained an upper hand—if it already does not—in this island nation.

Clearly then, India and China are caught in a zero -sum game of domestic politics in these countries. To be sure, there was always an element of anti- India feeling in local politics in these countries. The entry of China has given it a qualitatively different hue in the past decade or so. In Sri Lanka’s case, the problem is grave: the country’s elite recognises that it is caught in a Chinese debt trap that risks eroding its sovereignty, but for a complex mix of electoral politics and the political power of the Rajapaksa clan, it is unable to take substantial steps to come out of it.

The gulf that separates what Pakistan wants and what India can offer is so vast that there’s no common ground on which give-and-take can occur. Pakistan wants Kashmir. India cannot part with it. Period

India cannot simply play a matching game where the relevant factions in these countries are kept happy by political subsidies and payments for prestige projects. China’s pockets at the moment are so deep that this is bound to be a losing game. It is still not clear what India should do to escape these cycles of adversity in its neighbourhood. The usual answer of ‘managing’ local politics remains one option that has been tried and even worked to an extent, but fresh thinking is called for on this vital question. These countries are an important priority for India.

These are specific regional and global issues that Indian leaders and diplomats are adept at handling. The matter that should concern everyone is the current churn in the global system. Since 1947, India has faced two major foreign policy challenges. The first one in 1962, when the country was caught napping as China attacked and Indian defences crumbled. The country lost its foreign policy bearings for a while. The second emerged in 1991, when the Soviet Union collapsed and India was left without a major backer. Attacks at the United Nations Security Council and UN Human Rights Council on Kashmir became frequent and vicious. But at the time, Prime Minister PV Narasimha Rao deftly managed a major re-orientation in foreign policy away from non-alignment to a closer relationship with the US. Russia remained a key partner, but the alignment with the West—one that included the opening of the Indian economy—was carried out deftly. Engagement with the West and a much more open economy has remained the cornerstone of India’s engagement with the world.

A quarter century later, that period is coming to a close and another major transition is at hand. Unsurprisingly, it involves China, once again. Three features can be discerned. One, the world is likely to get more chaotic before it settles down again. Two, unlike the liberal order that prevailed in the last 25 years and benefited India greatly in terms of capital flows, technological options and closer integration with the world, the new order is unlikely to be liberal in any sense of the word. Three, the chances of conflict are probably greater now than, say, in the last decade. China has gained from the liberal trade regime that emerged after the World Trade Organization was created in 1995. But unlike the US, for example, it runs mercantilist policies that are meant to enrich itself at the expense of others. From a tightly run exchange-rate regime to its Belt and Road initiative, which is supposed to be a new edition of a Marshall Plan but is in fact an imperial venture, China does not provide the global public goods that characterised US dominance of the world after 1945. If anything, it has eroded global security considerably and economically, it is now the ‘buyer of last resort’ that keeps the global economy afloat. On both counts, it is the polar opposite of what the US is. Some of the brightest foreign policy minds in China see nothing wrong in a hierarchical global order with China at its helm. No one can dispute this and say the US was no different. But take a closer look and the differences are clear: from global trade to multilateral institutions that maintained global order—from key UN organs to the Bretton Woods institutions and others—the US offered a far more benign environment. China offers none of that.

For India, this is doubly problematic. For one, even in the days of ‘cold peace’ with the US, Delhi did not have to bother much: the US was located in a different hemisphere. For another, it never had a militarised conflict with the US. With China, both problems are acute. The adversary is right across the border. Not only that, it is propping up a tottering neighbour to the west that refuses to settle for peaceful relations with India. To top it all, the military and economic disparities between India and China are vast and widening in the military sphere.

So far, India’s response in dealing with China has been that of hedging its bets. It has not ‘offended’ Beijing by entering any of those alliances the latter may construe as militarily offensive. The example of the much-maligned QUAD, the group that includes India, Japan, Australia and the US, is relevant here. Originally an informal consultative arrangement between the four countries, the group has never moved beyond a closed-door talk shop format. This is primarily because India does not want to irk Beijing. But this kind of hedging is unlikely to be of any use with China. The latter does not hesitate to take offensive measures when it thinks necessary. There is, of course, no need to get into military entanglements with China, but India needs to rethink at the ideological, political and economic levels how it should deal with the country, the key external challenge that India will continue to face for years to come.

The key to managing many of these challenges sounds almost tautological: keep the economy speeding up. India’s ability to counter China in its neighbourhood where many countries are playing off the two countries requires larger financial resources than what India has. One major reason for India’s attractiveness as a partner for many countries in the West is its strong economic growth. Apart from vital domestic reasons—reducing poverty— the abovementioned reasons make it very important that it does not lose sight of economic performance. As it moves to a higher growth trajectory, many of the problems that appear daunting now will become much easier to handle.