The year of the most feared batsman 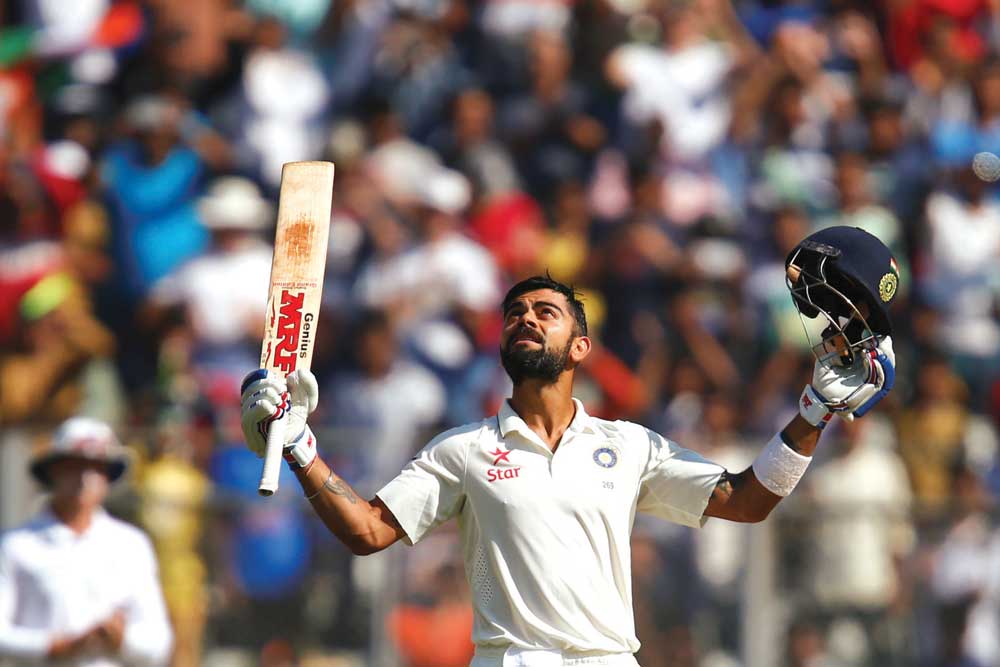 FOR MOST OF its history, Indian cricket has displayed a collective mediocrity brightened only occasionally by the sparkle of individual genius. As with modern India itself, the whole of India’s cricket has been immeasurably smaller than the sum of its parts.

Some Indian players have been exceptional—Sunil Gavaskar, Kapil Dev, Sachin Tendulkar, Rahul Dravid, Virender Sehwag, Anil Kumble, Virat Kohli and Ravichandran Ashwin; but Indian teams have too often been unbalanced, uncompetitive and soft. It was only with the arrival of Gavaskar that India could boast of a player who would stroll into the World XI of his time. Before him, there was none who might expect to be picked for such a hypothetical team in all conditions; but Gavaskar would have opened the batting against Mars at bouncy Perth, spinning Colombo, or seaming Leeds. (So wonderful was his batting for India that it earned him the right to bore us forever after in the commentary box.)

What has sustained India in the global cricketing imagination has been the size of its crowds, the fervour of its cricket fans, and, in the last decade, the vast volume of money generated by the richest cricket ecosystem on earth. Indian cricketers—even those of modest talent—are feted like gods, and this widespread worship has also served to aggrandise Indian cricket, to plump it up to a stature that it hasn’t quite merited… until now.

This last year—2016—has been a year like few others in Indian cricket. The years that stand out have been 1932, when India made its debut as a Test-playing nation; 1971, when we beat a relatively modest West Indies and a very strong England away, making us briefly—and chiefly in our own eyes—world-beaters; 1983, when we first lifted the World Cup on an insane day at Lord’s, an act of giant-killing unmatched in cricket history; and 2009, when India went to the top of the International Cricket Council’s Test rankings for the first time.

The year 2016 enters the cricket pantheon not because India is back at No 1 in the Test rankings, nor even purely because it is the year in which it equalled its own record of being unbeaten for 17 consecutive Tests (done first in the stretch between September 1985 and March 1987). I should pause here to point out that it’s an equalling of the record only in strictly numerical terms. In truth, it’s a huge improvement. Look behind the number—17 Tests—and you’ll find that only four of those unbeaten Tests were victories when the record was set in 1987. Twelve were draws, and one Test was memorably tied. Yet in the latest case, as many as 13 of the run of 17 unbeaten Tests have ended in Indian wins. Being unvanquished now means winning Tests (and series), not merely the avoidance of defeat.

In truth, 2016 is seminal because it’s the year intelligence came to Indian cricket and dreary obscurantism was banished— the year in which a lot of crap was swept away. The Board of Control for Cricket in India (BCCI) finally accepted the use of the Decision Review System (DRS) in Test cricket, dragging India out of Palaeolithic darkness into modernity and light. It was Indian cricket’s equivalent of the abolition of sati. This is the doing of Virat Kohli, India’s new captain, whose rational and forthright cosmopolitanism has helped India put behind it the mofussil mulishness of MS Dhoni.

Ashwin is cerebral, though not always coolly so: like Kohli, he has an aggression that is all the more invaluable for its being implanted in a fine mind

The resistance to DRS was a result of the innate cultural conservatism (and smallness of vision) of both Dhoni and Tendulkar, the demigod who blocked the use of technology as tenaciously as he did those many yorkers from Brett Lee. It was a pinched, middle-class view of the world—Ranchi meets Bandra (East)—abetted by the pot- bellied panjandrums at the BCCI, an organisation with no love for cricket and a boundless lust for lucre. The Indian objection to DRS was embarrassing and irrational—‘We won’t use it because it isn’t perfect.’ (So why use condoms?) They felt burned after their disheartening series in Sri Lanka in 2008, when they succumbed to the mysteries of Ajantha Mendis and found in DRS a scapegoat for the team’s technical ineptitude. And so for eight long years India refused to use DRS, even though every other side in world cricket did. Inevitably, India suffered: in Test after Test, it received more rough decisions than the other team, as if by a cosmic fatwa to punish the BCCI for stupidity.

This has been the year of Kohli, the most feared batsman in cricket—more feared by opponents than Tendulkar was. In truth, Tendulkar wasn’t so much feared as coddled, and almost more as an artefact than as a cricketer, for he was a lopsidedly developed man-child who batted with a technical perfection that was always somewhat encyclopaedic, never entirely intimidating. Kohli is different: opponents fear him, and look for ways to rattle him. And when they do, he rattles them right back, not just with his blade but also with his tongue. James Anderson’s charmless attempt to devalue the worth of Kohli’s double-century in the midst of the last Mumbai Test was a perverse compliment to the powers of Kohli. And Kohli knew that.

Kohli is a man who is combative on-field and articulate off it. He speaks his mind and is not averse to needling the opposition; other teams do that, too, most notably the Aussies, but Kohli does it with some finesse, and without that jarring Antipodean hypocrisy. He is always interesting when he talks about the game, and has none of the mind-numbing verbosity of Dhoni, a man who tends to say in five sentences what can (and should) be said in two.

India’s Test captain has ushered his team into a new mental and moral era. “One thing that I really wanted the team to do,” he said after India won the Mumbai Test, “was express themselves in Test matches and not think about personal performances.” Describing an ailment that has afflicted Indian cricket since its earliest days, he continued: “… a lot of times, you have an hour in the Test match where you can take the game away and are still not willing to go for it because you are close to your milestone or things like that. These are things that we have gotten out of our system completely.” (Readers with long memories will recall the Test match in Multan, in 2004, when Dravid declared India’s first innings closed with Tendulkar not out on 194. The great batsman had been dawdling in search of his 200, wasting precious time that India could have used to bowl at the Pakistanis. An exasperated Dravid declared, India was aghast at his lèse-majesté… and Tendulkar has yet to forgive him for it!)

No account of 2016 would be complete without a salute to Ashwin, perhaps the brainiest cricketer ever to play for India. He is cerebral, though not always coolly so: like Kohli, he has an aggression that is all the more invaluable for its being implanted in a fine mind. Kohli and Ashwin could form an irresistible strategic partnership alongside coach Kumble, making the Era of Kohli the finest of Indian cricket, an age in which our cricketers keep Test cricket alive in India by playing with panache, athleticism and courage, unencumbered by the many tedious complexes of Indian teams past—and unencumbered, at long last, by mediocrity.