It may retard an economic recovery, but halting currency speculation is critical too 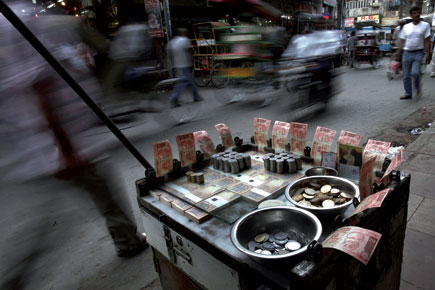 It may retard an economic recovery, but halting currency speculation is critical too


Is India set for a big issue of forex bonds? With dollars leaving Indian shores, the rupee in a slump, foreign loan repayments looming (mostly private sector ECBs) and forex reserves under threat, it would seem so. But first, policymakers have had the urgent task of arresting the currency’s free-fall (down 12 per cent since April). To attract inward dollars, the Government has declared that FDI limits in several sectors shall be raised: in telecom, for example, to 100 per cent. To curb speculation on the dollar-rupee exchange rate, the RBI has undertaken a surgical strike. It has pushed up overnight interest rates—by clamping the cash it lends banks via its liquidity adjustment facility—in the domestic money market. Here, a quick buck could be made by borrowing rupees cheaply to buy dollars and rebuy rupees as the currency fell further. With a spike in overnight rates, this game gets harder to play. As expected, Indian bond prices have fallen, making them more attractive (vis-à-vis US bonds) to foreign investors and others who had offloaded these earlier as the rupee shook.

Easy-money seeking businesses are upset by the surgical strike, arguing that it spells tighter money overall, which could delay an economic recovery. This is a valid worry. But it could also stabilise the rupee, the gains of which may be felt sooner. Would a global sovereign bond issue help?

“Sovereign bonds sound like a good option,” says Reena Rohit, a currency expert at Angel Broking, “especially when we’ve had an encouraging response each time such bonds were launched in the past.” Since India declared its economy open, it has exercised this option only thrice, to mop up about $10 billion, mostly from NRIs. India needs dollars again. According to Raghvendra Nath, managing director, Ladderup Wealth Management Pvt Ltd, a bond issue could “offset any potential outflows of foreign capital from [India]” but will work well “only if the quantum of the issuance is really large and its maturity extends to a longer term”.

One-off issues, others say, are a sign of India’s closed mindset of the past. It is time that the country had long-term dollar/euro bonds participate in global markets, being traded the same way US Treasury bills are. Yet, offering a hefty coupon rate on a huge $25 billion issue, India may be tempted to sell it as a rare opportunity. It would make more sense, says Rohit, to keep the issue “open to a broad set of investors” instead of just NRIs. It would help if the sums to be repaid on maturity of the sovereign bonds are in dollars/euros too.