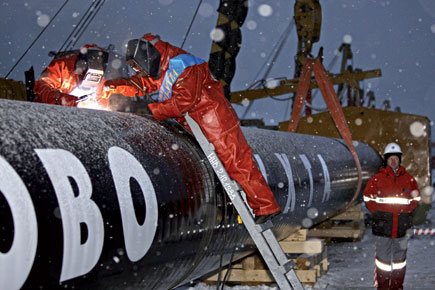 International diplomacy of late has centred on ‘sanctions’ against two countries. While Russia has invited them for its adventurism in Crimea, Iran has been in talks with the West to have those imposed on it eased. The other thing common to both is that they hold huge hydrocarbon reservoirs, which explains why global markets are watching events so closely: any shift in the status quo could impact energy prices.

The significance of Russia can be gauged by the fact that it is the third largest producer of oil and its top exporter (rivalling Saudi Arabia). It is also the second largest producer of natural gas. Nearly three-fourths of its oil and gas is consumed by Western Europe. “Russia is a major and irreplaceable (in the short term) supplier of Germany and Europe’s oil and gas,” says Robert McNally, president of Rapidan Group, a US-based energy consultancy. “An oil cut-off or sanctions on Russian hydrocarbon exports is unlikely because it would be damaging for all the parties involved,” he adds. According to Lydia Powell of Observer Research Foundation, “Russian gas, exported to Europe, is mostly pipelined gas, and such contracts are considered more stable and dependable and cannot be so easily replaced [by LNG].” Since Western Europe appreciates the consistency of Russian gas supply, it may create fissures within the EU on how far the West ought to punish Russia for Crimea’s annexation.

Iran is especially significant for its oil supply. The oil market is heartened by the very fact that earnest negotiations are underway between the West and the Islamic Republic. This upholds the spirit of the November round of talks, under which Iran agreed to cap its nuclear ambitions in exchange for an easing of trade sanctions that have hurt its economy by choking its crude oil exports.

Yet, on the whole, uncertainty prevails. McNally feels that the Crimean Crisis could have an adverse fallout on the world energy scenario if hostilities escalate; an Iran emboldened by Russia’s defiance of the West, for example, may be tempted to extract bigger concessions from the US, which could unsettle a power balance in the Middle East. Also, a protracted loss of Russian gas would prove disruptive not only for Europe, but for Asia too. If Europe takes to LNG, this demand would pressure Asian gas prices up as well, says Powell. Russian revenues would suffer, perhaps granting the US a chance to export gas to Western Europe.