Narendra Modi and the Stockmarket 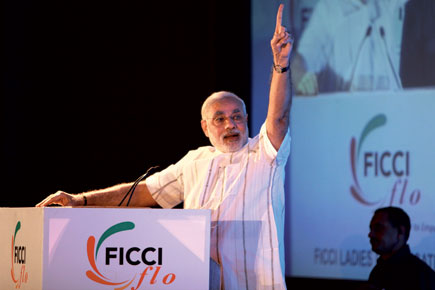 There is a word that Indian stockmarkets appear to be in the grip of: ‘decisive’. It describes a form of political leadership that many market analysts hope—and increasingly expect—will lead India out of its economic slump. It also explains the BSE Sensex’s gains on 5 December after exit polls for four state elections pointed to a strong showing by the opposition BJP, and then again on 9 December, the first day of trading after the actual results confirmed the Congress’ rout. It was a sign of “angst against bad economic governance” says Phani Sekhar, a fund manager with Angel Broking.

The results have largely been read as a shift in voter preference for ‘decisive’ leadership, which is what some vocal FIIs are betting on as a way to revive the reforms they are keen on. Observers expect the market mood to stay buoyant. As an Angel Broking reports puts it: ‘The expectations of a stronger reform-led mandate are likely to gain even more traction.’ Deepak Kapoor, financial consultant with ADC Legal Services Pvt Ltd, says that the recent gains in stock value will not be given up, even if market indices dip on periodic rounds of profit-booking. “But,” cautions Sekhar, “extrapolating this verdict to a saffron victory in the General Election next year might actually be a misreading [of poll results] and might well disappoint the bourses.”

While Narendra Modi of the BJP is seen as the frontrunner in the race for prime ministership, the Lok Sabha polls of 2014 would have a novel contender in the Aam Aadmi Party, which, after its stellar show in Delhi, could yet upset the saffron party’s expectations of a mandate in its favour. Plus, indices could decline on weak corporate results and worsening macroeconomic conditions if the Congress abandons fiscal responsibility in a fit of populism. Now that a loose fiscal policy of earlier years has already resulted in inflation, the party may be tempted to spend even more in desperation. If an incoming government signals fiscal restraint, says Sekhar, then the economy’s prospects would brighten and “the market may well propel itself to a trajectory which might go beyond [current] expectations”.

But then, candidate Modi’s fiscal proposals remain unknown, even if his position on other issues is seen as ‘decisive’ by his supporters. Also, not everyone is convinced that addressing what ails India’s economy is a simple matter of a single leader’s will. Yet, if money can be made on political speculation, punters will try to make it.