It is not just about Lalit Modi and some greedy businessmen and politicians. If the IPL mess is not contained quickly, the entire world cricket economy could be staring at disaster. 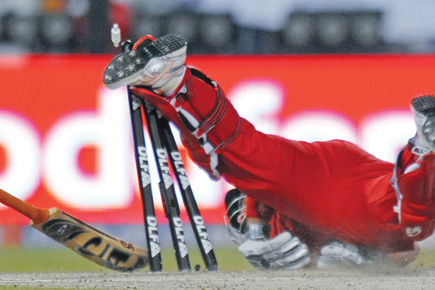 If the IPL mess is not contained quickly, the entire world cricket economy could be staring at disaster.


If the IPL mess is not contained quickly, the entire world cricket economy could be staring at disaster.

Forget about clichés about hindsight, foresight and perfect vision. Just think about it: IPL is India’s domestic Twenty20 cricket league with a few overseas professionals in tow, but the number of oligarchs the Indian Premier League (IPL) has spawned, the dubious deals struck on the anvil of a brazen nexus of business and politics, and the continuing clamour for a chunk of its riches all make Indian cricket look like Russia’s energy reserves. Tough to snuggle into, easy to siphon out. And valuable as hell.

Just as well-connected Russian entrepreneurs became unbelievably rich overnight, buying up dirt cheap stakes in hitherto state-owned corporations as the country lurched towards a free market economy, India’s cricket entrepreneurs, such as Lalit Modi, too have benefitted beyond imagination thanks to the ‘privatisation’ of what is perhaps the country’s biggest media and consumer business, cricket.

Now, as a tidal wave of financial controversies threaten the very foundations of IPL in just its third year of existence, it is perhaps the surest indication that IPL is an ill-thought-out business model, one that seeks to combine the worst attributes of Wall Street-style capitalism and Russian oligopoly. (Will a beleaguered Modi become India’s own Mikhail Khodorkovsky, once the wealthiest man in Russia, now serving time in prison for fraud?)

Franchise owners and the Board for Control of Cricket in India (BCCI), much like an ill-fated bank with the same initials, are perhaps underestimating the crisis of credibility that IPL now faces. Cricket itself has endured several crises—from bodyline to Kerry Packer’s rebellion to match-fixing—but the rot this time round runs too deep and the financial stakes are far too high for cricket fans to shrug and keep watching Dhoni hit ‘DLF Maximums’ (sixes, that is).

Given that IPL is BCCI’s new cash cow, and India the centre of the global cricket economy, the current mess could fast turn out to be the game’s equivalent of the global financial crisis. “On the eve of the first IPL, I said on TV that the league would experience a massive corruption scandal within five years—I was being conservative. And really, how could it be otherwise? Opaque finances, inflated valuations, related-party transactions, political influence… hello Enron!” says Gideon Haigh, the noted Australian cricket writer. “But, if even half the allegations are proven, this affair is a great deal worse than Stanford (an alleged $8-billion Ponzi fraud perpetrated by a US firm). The whole of the world cricket economy is leveraged to India. A crisis of credibility impacts everyone, Australia included, who have been huge beneficiaries of broadcasting and sponsorship monies from the Subcontinent.”

America’s subprime mortage crisis that led to the Great Recession of 2008 was partly the result of greedy Wall Street bankers devising highly complex yet hugely profitable derivatives and other deals ostensibly to fulfill the home ownership dream of poor Americans. With IPL too, Lalit Modi, for the sake of taking a slow and intellectually taxing game to the masses, enlivening the average Indian’s evenings, and widening the grassroots pool of cricket skill, made a few compromises that would come to haunt him.

It’s another matter that Indian cricket hasn’t gained anything significant after IPL’s advent. Inflated salaries and easy fame mean players often fail to live up to expectations at the highest level. If you set aside the successes in Test cricket, often fashioned by those who aren’t star IPL players, India’s performance in T20 internationals and ODIs has been in decline.

By the time you read this, Modi would perhaps have been axed as Commissioner and Chairman of IPL, despite his current show of defiance. Once the blue-eyed boy of the BCCI and Union Agriculture Minister Sharad Pawar, Modi is fast running out of friends. But if he does end up as the scapegoat, he would only have himself to blame. His ruthless ambition, abrasive manner and an ego as bloated as the MRF blimp have earned him many powerful enemies.

“Look,” says a BCCI veteran, “at the end of the day, Modi is an outsider who gatecrashed the system. And he doesn’t have friends powerful enough and thick enough to really stick their neck out for him, either in the BJP or Congress. Modi’s friends are fair-weather friends.”

But it’s evident that Modi did flourish thanks to his friendship with Pawar, and with Vasundhara Raje Scindia when she was Chief Minister of Rajasthan. He proved his mettle very quickly by selling BCCI’s domestic TV rights to Nimbus for $612 million, a tenfold increase over the previous round of rights sold. During the Rajasthan Assembly election in 2008, one of the opposition’s key charges was that Scindia had allowed Modi such a free run that he was almost a de facto executive of the state. There are now several cases in courts against him relating to irregularities in real estate deals that Modi cut during her tenure. Now as the ruling Congress goes investigating Modi’s IPL role with extra gusto, given his perceived closeness to the BJP, it’s interesting to note that in his early BCCI days (with Pawar its power centre), he wasn’t very popular within the BJP either. During the last BCCI election, the BJP’s Arun Jaitley, also president of the Delhi and District Cricket Association, had cast his lot with Jagmohan Dalmiya, who was taking on the Pawar-Modi-Srinivasan combine.

If the Congress-versus-BJP aspect of the story is not very clear cut, nor is the Tharoor-versus-Modi part, which threw up details of the current scandal. Why, for example, did Modi bring this upon himself, like Bhasmasura the demon, by getting into a tweet spat with former Minister of State for External Affairs Shashi Tharoor in the first place?

The seismic bouncer that has brought on the tidal wave was Modi’s disclosure of names behind the Rendezvous-led mystery consortium that won the Kochi franchise under Tharoor’s ‘mentorship’. It included a certain Sunanda Pushkar, a close friend of Tharoor who it turns out indirectly owns a twentieth of the franchise as ‘sweat equity’ granted to her free as a reward for marketing consultancy services in the future. As business practices go, such a sizeable award is dubious—an admission of which can be seen in Pushkar’s later offer to forfeit it, even if it came too late to save Tharoor his job.

With Tharoor having resigned as minister and Modi likely to exit as IPL chief, what about the other lead actors? What about Pawar himself who had presided over the creation of a corrupt league? Other franchises’ shareholding patterns, as revealed by Modi and sundry declarations made to the Registrar of Companies, are likely to be incomplete and dated. Opacity is likely to reign in other ways too. As IPL players’ three-year contracts expire, several teams are trying to retain coveted players and poach others with the lure of sweat equity to get around the league’s salary caps. And there could be aftershocks in the making; Modi now wants to play the clean guy and reveal all the owners’ names to clear the air. BCCI President Shashank Manohar and half the franchise owners are jittery about the idea, and seem vehemently opposed to it at the moment.

What’s more, there are suspicions that the Kochi bid was put together with help not just from Tharoor, but also a legendary cricketer on the IPL’s governing council and a current ‘icon player’ in one of the original eight teams—flouting conflict-of-interest norms with impunity. If true, this could deal a body blow to the IPL.

If the IPL were run like the corporation that Lalit Modi touts it to be, regulators would have hauled its top honchos over the coals for an unending series of conflict-of-interest issues. Be it BCCI treasurer N Srinivasan winning a franchise bid, or Modi facilitating franchise ownerships for several of his relatives. And despite working more than 18 hours a day for IPL, Modi is its honorary chairman who does not take a single rupee as salary or commission on profits. Now at last, he might get some much needed rest—and the time to look after his own ventures.

The IPL is essentially a transplant of a model that’s a mix of America’s NBA and the English Premier League (EPL). With private ownership in place, entrepreneurs are afflicted by valuation mania—the constant need to know how much more their franchise could fetch in a sale (of shares if not the whole). That’s why when the EPL was formed in the early 1990s, the British football writer Brian Glanville presciently called it the “greed-is-good league”, referring to the motto of crooked financial trader Gordon Gekko in Oliver Stone’s film Wall Street. Today, while EPL is the world’s most widely followed football league, none of the 18 EPL sides, bar Arsenal, makes any profits, and several are bankrupt.

The EPL is no longer a model of efficiency. German Bundesliga’s TV revenues pale in comparison with EPL’s, but much of its buoyancy comes from its keenness to listen to fans on how to run the league. To ensure that clubs stay true to their game and keep slush money out, no individual can own more than 49 per cent of a German club, and large companies like Volkswagen and Bayer that own clubs can do so only after staying involved on a non-profit basis for at least 20 years.

Can the IPL survive the current mess? “It’s probably a little early to be asking such questions,” says Haigh. “One thing is reassuring: the public’s enthusiasm for IPL is unfeigned. Proof that the players themselves are corrupt would be devastating. But I suspect—I fear, in fact—that Indians are resigned to corruption in their institutions, and that they will simply shake their heads sadly, and say, ‘Oh well, that’s just the way it is’.”

Sure sentimentality is another Indian trait, but any industry that harnesses the passion of millions of cricket fans for profit cannot afford to care so little for its consumers. The BCCI is a private body. Franchises are privately owned. There is nobody for fans to complain to. This only places a bigger burden on the BCCI. Despite its patchy—to use a euphemism—record on matters of pelf and power in cricket, it must bear the responsibility of the clean-up act.

As T20 cricket faces its great moment of shame and truth, one can only hope that greed will exact its price in the long run. And that too much greed will blow up in your face. Think of that so-called ‘great innovator’ of energy trading that once ‘saw the future’. Think Enron.