And Gujarat Chief Minister Vijay Rupani feels most secure there 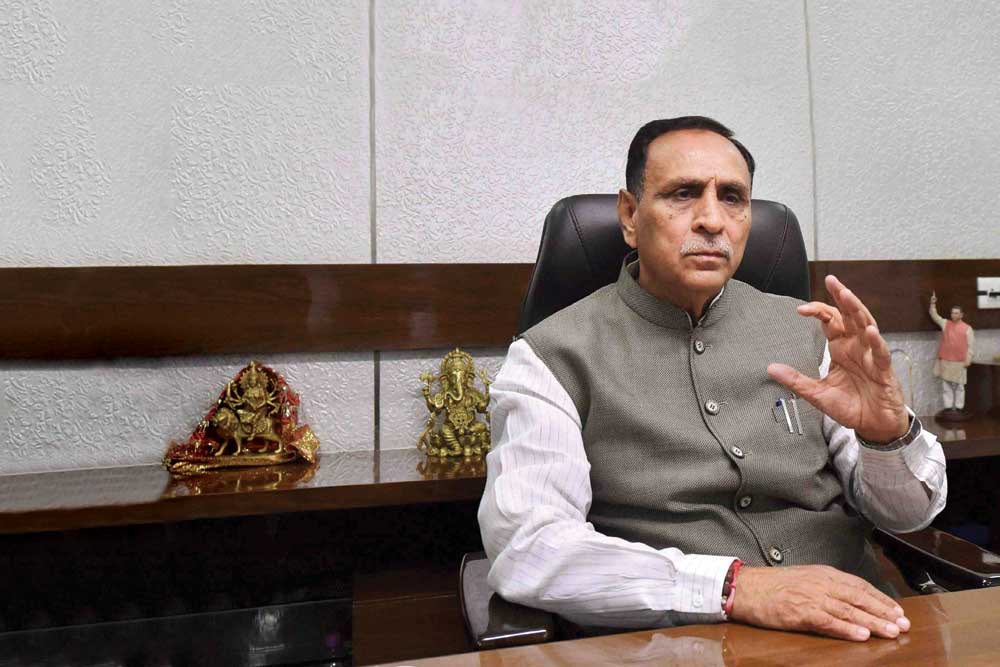 AS BJP PRESIDENT Amit Shah’s convoy leaves Chief Minister Vijay Rupani’s residence in Gandhinagar, the latter prepares for a string of interviews. Sitting in the office that Narendra Modi had occupied for 13 years, Rupani reels out by-now-familiar answers to predictable questions. It has been over three years since Modi vacated this space to become Prime Minister, but almost nothing in sight has been re- arranged. “When I used to come here during the time when Modiji was Chief Minister, this room was the same, except for some of these things which I got as gifts,” says Rupani, a BJP leader from the Saurashtra region, pointing to artefacts on a shelf behind his seat. “The Buddha statue and this picture of [the proposed] Statue of Unity have been there since [Modi’s] time.”

The five-foot Buddha carved in sheesham just outside the door and the Statue of Unity image modelled on Sardar Patel inside the office were both installed in 2013, when Modi was Chief Minister. They speak of Modi’s two big dream projects for the state: building a grand Buddha monument and the world’s tallest statue. In September, the Prime Minister had visited the site for the statue at Sadhu Bet, near the Sardar Sarovar Dam, with Union Minister Nitin Gadkari, the Chief Minister and his predecessor Anandiben Patel in tow. In June, Modi had spoken of putting up the Buddha monument in north Gujarat’s Dev Ni Mori village, where ruins were found of an ancient Buddhist monastery.

The Prime Minister also looms large over the BJP re-election campaign, his rallies having taken centre-stage in the final week. Since this is his home turf, he sets the agenda and tone. This is a cause for comfort, if anything, for Rupani. “So far, for ten years, UPA governments in Delhi went against Gujarat. It hurt the state. Now Gujarat’s son is in Delhi, so the state is benefiting,” he says, “With BJP in the state and at the Centre, Gujarat’s development process will move forward very fast. So the distance only has a positive impact.” Each time he is asked about the ‘absence’ of Modi, who was at the helm in the state for the past three Assembly elections, the soft-spoken leader repeats the party’s hope of making gains this December— that under Modi as Chief Minister, the BJP got 127 seats, and now with him as Prime Minister, it will get 150-plus.

Appointed Chief Minister 15 months ago to replace Anandiben Patel, Rupani has tried to pick up the threads from where Modi left. “I have said earlier too that this is Vikramaditya’s throne. Whoever sits here will do justice,” he says, “Modiji went through a lot of struggle for 13 years. Today, it is not like that. I feel proud that I could do what Modiji was doing. I will continue in his footsteps.”

Neither Rupani nor political pundits in the state expect the vacuum left by Modi to be filled. If it’s not the Prime Minister, then it’s the BJP chief from whom the Chief Minister takes advice on “crucial matters relating to the state”, as he puts it. “Modi is here every other day,” observes Achyut Yagnik, honorary secretary of the Centre for Social Knowledge and Action in Ahmedabad, “He and Shah call the shots. Rupani was a Rajkot leader who was superimposed on Gujarat after Anandiben quit. He is banking on Modi’s appeal [to retain power].”

Political analyst Shirish Kashikar, however, says in the year-and-a-quarter that Rupani has had in office, he took around 100 decisions on development schemes and reforms. “He took forward the programmes that Modiji had initiated,” he says, “If a soft image is considered negative, that is his only negative.” While Rupani balances the equation between the party and the government, he adds, his deputy Nitin Patel handles administrative nitty-gritties. In Kashikar’s analysis, having a Chief Minister who started as a grassroots worker in Rajkot would help shore up BJP support in Saurashtra, where it has been relatively weak. Rupani is said to be popular among the region’s Leuva and Kadava Patidars, among others. As a member of the Jain community that forms less than 1 per cent of Gujarat’s population, Rupani is seen as a caste-neutral leader in a state which is witnessing a Patidar agitation for OBC status to get reservations in college admissions and government jobs. “He got Gujarat’s throne as a fallout of that agitation,” says sociologist Gaurang Jani, a lecturer at Gujarat University, Ahmedabad.

Rupani dubs as Congress agents the three young caste leaders who have been rallying opposition to BJP rule within their respective groups—Hardik Patel of Patidars, Alpesh Thakur of OBCs and Jignesh Mewani of Dalits. “We have been saying it was a Congress conspiracy and today all three have come out openly [for that party],” says Rupani, “Their movements are in the name of the people, but they are cheating people. Hardik promised Patidars reservations, but Congress has no constitutionally tenable formula. Alpesh had said he will not join politics and will work for society; he also went to Congress and exposed himself. Jignesh carried out an agitation in the name of Dalits till the UP elections. Afterwards, he also went off. So all of them are exposed.”

I believe people will rise above caste and vote on the basis of development. It is the golden period for the state. In the next five years, the state will witness a lot of it

The Chief Minister’s throat is sore, but this does not stop him from lashing out at the Congress, particularly its new chief Rahul Gandhi. Asked if the Grand Old Party is trying to replicate its old ‘KHAM’ formula—which won it 149 of the state’s 182 seats in 1985—by wooing Kshatriyas, Harijans, Adivasis and Muslims, Rupani is dismissive, saying the people of Gujarat realise that the Congress is indulging in caste politics as a short cut. “Times have changed,” he says, “Even Muslims are angry with Congress, which has looked at them only from the prism of a vote bank. They got left behind because of Congress. Election results of the past three years, like in UP where the media is saying Muslims have also voted BJP, show they are angry with Congress.”

He brushes off Rahul Gandhi’s temple hopping in the state as an election show: “Narendrabhai came to Akshardham and he followed him. But in Delhi, just 5 km away from his office is an Akshardham temple, but he has never gone there. People know that because of elections here, he is going from one temple to another. It has no meaning.”

Modi and Shah, the BJP’s lead campaigners, have also made Gandhi the target of their anti-Congress tirade. At a rally in Dharampur, Modi referred to Gandhi’s elevation as Congress chief as “Aurangzeb raj”, a barb that followed a comment by Congress leader Mani Shankar Aiyar, who had asked, “When Aurangzeb came in place of Shah Jahan, did any election happen?” At a gathering in Veraval in Gir-Somnath, Shah highlighted the BJP’s local poll wins in Amethi, the Gandhi pocketborough in Uttar Pradesh.

Rupani speaks animatedly of Modi’s connect with people at large. “I learnt from him never to allow anti-incumbency to set in. He used to say one should look at things from all angles. ‘Sab ka Saath, Sab ka Vikas’ means [we have to] think about everyone, all sections of society.” Recently, he says, Modi told him Gujaratis wanted value-based politics and that aspiration had to be met.

The BJP slogan of ‘Hu Vikas Chhu, Hu Chhu Gujarat’ (I am development, I am Gujarat) gives Rupani the confidence that its development story will trump narrow appeals. “I believe that people will rise above caste and vote on the basis of development. It is the golden period for the state,” he says, “In the next five years, the state will witness a lot of it.”

Rupani contends that traders, who account for a large proportion of the electorate, are no longer disgruntled with the BJP over the Goods and Services Tax (GST) regime. “The last GST Council has addressed their concerns. All the chambers [of commerce] have welcomed decisions taken by the Council,” he says. “Whenever a new system comes in, it takes four-five months for implementation. There are teething problems.”

He also refutes claims of Dalit anger against the BJP in the wake of the flogging in Una of Dalit men for skinning a dead cow. “In December end, after Una, there were elections in over 10,000 gram panchayats. We won 80 per cent of the elections and we won in Samatiyaragaun, where Una is located,” he says, “Those who were involved in the crime are in jail and the state government has taken tough measures.”

While Rupani is fighting a faceless foe, with the Congress refraining from projecting a chief ministerial candidate, in Rajkot West, a seat once held by Modi, he is up against the rival party’s Indranil Rajyaguru, who shifted from Rajkot East to take him on. His poll posters in this constituency, however, are dominated by images of Modi and Shah.

If he retains office, Rupani’s priorities would be to double farmer incomes in five years, ensure they get minimum support prices for their produce, and get Narmada water to Saurashtra, Kutch and North Gujarat. He has laid the foundation stone to lay a pipeline from Macchu dam to fill Aji dam with the river’s water. At a rally in Morbi, Modi recently hailed the Narmada project as a major BJP achievement, while criticising the Congress for taking credit for schemes like providing hand pumps.

The Chief Minister has had to face Congress allegations of wrongdoing after the stockmarket regulator SEBI imposed a penalty on his Hindu Undivided Family for allegedly manipulative share trading in a firm called Sarang Chemicals. “Congress has no real issues, either against BJP or me, which is why it is making false allegations,” says Rupani, “I bought a single stock of Rs 63,000 from this company in 2009. I took delivery through the stock exchange. It came into my demat account. For 18 months I kept the share and then sold it at a loss of Rs 28,000. In that, what speculation and what profit? The entire thing was scrapped… but Rahul Gandhi doesn’t understand what is turnover, profit, loss.” He also wants the Congress leader to explain how he arrived at a figure of 3 million people jobless in the state.

The Chief Minister, who had stopped a speech midway for the aazaan from a local mosque during his Gujarat Gaurav Yatra earlier this year, says the BJP believes in ‘sarva dharma samabhav’ (equal regard for all faiths) and justice for all. The rival’s Muslim outreach is appeasement politics, he holds. As with his policies, the contrast he makes is well in line with the views of the man in the spotlight, Narendra Modi. 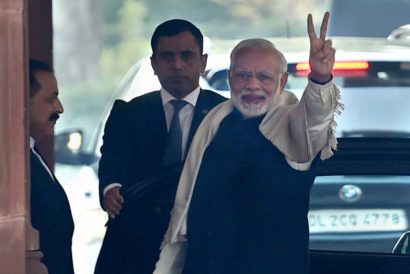 In spite of a hard fought electoral battle, the Congress has not been able to dislodge the BJP from Gujarat 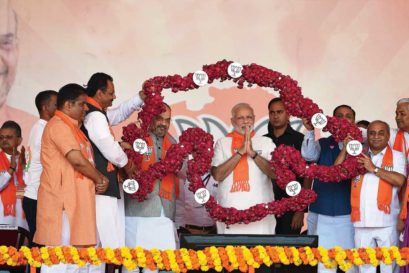 The Moment of Reckoning