He understood that democratic politics is algebra, where various parts of the electoral equation are held together by governance, not deposits in vote banks 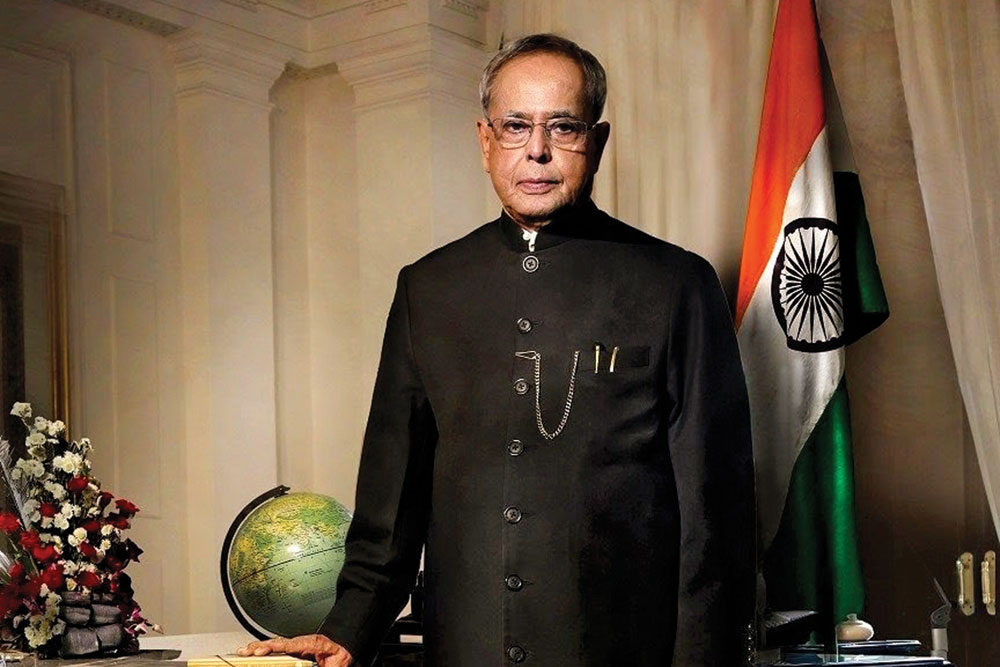 
A pandemic’s sense of pervasive death has diminished the funeral. Is that necessarily a loss?

Funerals are so often crowded with people come to lay a calling card on a bier. Death becomes another excuse for an hour’s hypocrisy, particularly in a town embalmed in power, where the next political transaction weighs so much heavier than the past, which is quickly reduced to light whiffs of conversation. The funeral prayer of Delhi is the cliché turned flaccid by overuse. Those who stood in the shadows wielding arsenic scalpels when there was life, suddenly discover virtues in statements released to the press as quickly as they are drafted. Those who had no time for the living race to the front of the queue at the funeral with solemn faces tilted towards cameras.

Genuine grief is a companion of solitude, for those moments of lonely reminiscence when the ledger of the world is empty on both sides: you gain nothing and you lose nothing in the public eye for you are not on display.

The human being is not a natural hermit. He is gregarious. Life brings us together. We call it friendship on the intimate level, association in an expanded context, and society on the macro scale. But we die alone. Maybe we should mourn alone, too.

Even writing a eulogy seems invasive of something precious: of long conversations that gradually increased in veracity with time, since confidence is the culmination of a difficult process which evolves through so many stages of time. I came to know Pranab Mukherjee, or Pranabda, when I was editor of a young but ebullient daily newspaper in Calcutta, and he was a senior star in Indira Gandhi’s firmament. We kept aside political differences—or, more accurately, he did—and continued to bond through the inimitable intimacy of the Bengali language.

The test came when, after 1985, Pranabda lost the confidence of the new Prime Minister Rajiv Gandhi, and with it his Cabinet position and the big bungalow in the capital that is the one unrivalled perk of India’s national politics. He moved to a small flat, which included a tiny room for puja. Very few people knew how religious, and indeed Brahminical in the best sense of the term, Pranabda was. Every day would begin with a puja, and each year he would go to his birthplace-village in Bengal to preside over puja ceremonies. I would call on him with even more frequency during those fallow years; years which must have strengthened his study of astrology, which attempts an explanation for the devastating descent or the rapid ascent of fortune. Destiny is not coherent.

Very few people came to visit him then. He never forgot them.

Our mentor-student relationship had many facets, from books to speeches to animated discussion of vital political decisions, but everything was safely stored in that custody of trust which can be irreparably damaged by even a single instance of leakage. What was confidential in his presence, must remain closeted in his absence. His public life, however, to state the obvious, was public. For me what is interesting is not where he reached on the slippery slopes of politics, but what he should have achieved.

Pranab Mukherjee was the third Bengali icon who was denied a legitimate place as Prime Minister of India in the modern annals of our country.

The first was Subhas Chandra Bose, who was finessed out of leadership by Mahatma Gandhi in the late 1930s for reasons that do not stand up to historical scrutiny. Bose left the Congress and found his own way towards the common objective of India’s freedom from British imperialism, raising the Indian National Army in alliance with Japan. Bose survived World War II, but was lost to the nation in the uncertain aftermath. There has been much controversy about what precisely happened. However, of this we can be certain: if the charismatic Bose had returned to India, he might have led the nation after the 1962 elections, and certainly would have become Prime Minister after 1967. Bose was born in 1897, so would have been only 70 in 1967.


The second Bengali was sabotaged by the communists. This is almost unbelievably ironic since Jyoti Basu was a founder of his party, the CPM, or the Communist Party of India (Marxist). He was Chief Minister of Bengal from 1977, and nationally renowned by the time of the hung Parliament of 1996, in which a non-Congress coalition was ready to form the Union Government. This coalition solved its most difficult problem without fuss, choosing Jyoti Basu as potential Prime Minister. One newspaper headline proclaimed that a red star had risen over Delhi, while coalition partners awaited the formality of party approval. Instead, the CPM politburo, in a ghastly mistake, decided not to join government and thereby prevented Basu from becoming the first communist and Bengali Prime Minister.

Jyoti Basu might also have become the wittiest Prime Minister. Once, travelling first class from Calcutta to London on British Airways for his annual holiday, he was asked by a bumptious fellow passenger what a communist was doing in the first-class cabin. Replied Basu: “I am a first-class communist.” Jyoti Basu was also the only communist who could have renamed the road on which the American consulate in Calcutta stood Ho Chi Minh Sarani and then gone to America to seek investment.
Later, in an interview to this writer, Jyoti Basu called the decision “a historic blunder”. He was right. Indian communism never recovered. In 2000, Basu retired. His successors not only lost the communist fortress of Bengal, but whittled down the red movement to insignificance.

In 2004, Pranab Mukherjee could have become the first Congress Prime Minister from Bengal. By any measure of ministerial experience, parliamentary sagacity or political savvy, he was the pre-eminent figure in the Congress, way ahead of Manmohan Singh. But Sonia Gandhi would not trust him

IN 2004, Pranab Mukherjee could have become the first Congress Prime Minister from Bengal. By any measure of ministerial experience, parliamentary sagacity or political savvy, he was the pre-eminent figure in the Congress, way ahead of Manmohan Singh. But Sonia Gandhi would not trust him. Indeed, he did not even get the finance ministry, which was his second choice. The same barely disguised antagonism was evident in 2012, when Pranab Mukherjee wanted to become President of India. That was when he brought a lifetime’s craft and personal relationships into play, and outmanoeuvred the Congress.

Pranab Mukherjee was finance minister when he came to Bengal to do the sort of thing that politicians are required to do: change the name of a street with a speech before mohalla elders. Except that this was the lane in which I had grown up, in the small working-class settlement outside Victoria Jute Mill on the banks of the Hooghly called Telinipara, a two-hour drive from Calcutta through difficult traffic and pockmarked roads. Previously known as the rather grandiloquent Sir Alexander Murray Lane, it was being renamed in memory of my father. There were no political rewards in this gesture; it was personal and typical of the inherent generosity of the man. The boys on the lane were half-bemused and half-awed when he arrived, but suddenly while we were at lunch they gathered in front of our home and raised lusty cries of “Pranab Mukherjee Zindabad!” They cheered him on his way back to Calcutta and Delhi.

Our last one-to-one conversation was in December last year; the shadow of uncertainty occasionally flickered across his face when he spoke of his health. But his political analysis was as frank and astute as ever. He had no vested interest left in any party, sharpening his objectivity.

We met for the last time in January this year, when he released my book on the lawns of his home in Delhi. He was frail. But his speech had all the familiar verve, punctuated periodically by the trademark quiet smile as he made an off-the-script comment or recalled something from the silken folds of memory. It was an unforgettable privilege and an honour for me and for everyone who came to hear him

We met for the last time in January this year, when he released my book Gandhi’s Hinduism: The Struggle Against Jinnah’s Islam on the lawns of his home in Delhi. He was frail, for his body had been further weakened. But his speech had all the familiar verve, punctuated periodically by the trademark quiet smile as he made an off-the-script comment or recalled something from the silken folds of memory. It was an unforgettable privilege and an honour for me and for everyone who came to hear him. Then February darkened with the pall of Covid-19 and a pandemic put us into isolation by March.

One perennial topic between us was Bengal. Pranabda was the quintessential Bengali: warm, erudite, involved, and a perfect gentleman. He knew Bengal better than anyone else, but his real passion was national politics, which he learnt at the invaluable school dominated by Indira Gandhi. He was devoted to her, and she understood his worth far better than her successors did. His loyalty did not flinch during Indira Gandhi’s most difficult days, after she lost the elections in 1977 and had to face the Shah Commission, set up to inquire into the multiple excesses of the infamous Emergency. Indira Gandhi and he were the only two leaders to boycott the commission, although he did so with legal finesse rather than political confrontation. She was clear-minded enough to foresee defeat once the 1977 campaign began, and told him so, although her colleagues were optimistic, and her opponents were unable to believe they could ever win. Pranab Mukherjee was always confident of Indira Gandhi’s revival, because he knew that her connect with the base was her primary strength. She drew her political chart from the people’s eyes.

The Congress has first steadily and then sharply declined after Indira Gandhi because it narrowed its concentration from the people to just its presumed voters. Pranab Mukherjee understood that democratic politics is algebra, where various parts of the electoral equation are held together by governance, not deposits in vote banks. He would have always kept this much in mind if he had become Prime Minister of India.