We Are What You Are

Being Muslim means something to others. It is also much more than stifling labels 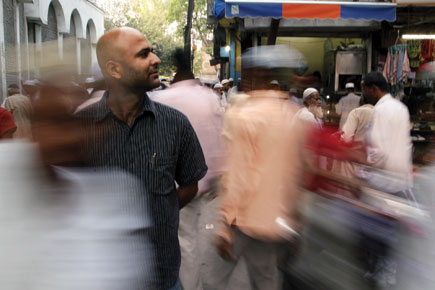 Being Muslim means something to others. It is also much more than stifling labels


My great-grandfather was nine years old when the 1857 uprising was crushed by the iron fist of the British Empire. Bahadur Shah Zafar was presented with the heads of his sons on a platter, and Muslims were banned from the city of Delhi. British civil servants churned out tracts with titles such as, ‘Are Mohammeddans Compelled by their Religion to Rebel?’ Unlike many of the Muslim shurfa who turned in on themselves in defeat, my great-grandfather took the decision to swallow his pride, and become a clerk in a new order, climbing up slowly to the position of deputy collector and sadr of the Waqf Board in Gorakhpur.

One of his sons, my grandfather, became a doctor. He finished his degree at King’s College in London and went on to serve on the Burma front as a major in the Royal Medical Corps during the Second World War. I have a book that his friends gave him after he finished his stint in medical school. It is inscribed, ‘To Moses, on his initiation. 1936.’ The empire which he defended couldn’t even pronounce his name, changing Moezzuddin to the name of an Old Testament prophet.

My father was seven years old when Independence came, and with it a drive towards socialisation and the redistribution of land. The izzat that had slowly been accumulated was swept aside and my father became an engineer, working with the Oil and Natural Gas Corporation. Ours was the only Muslim family in the ONGC compound in Ahmedabad. My sister tells me that the children on the floor above us would spit upon my parents if they sat in the porch to have tea.

But this was all before my time, or at least before the time of my memory. To be a Muslim in today’s world involves a life of different challenges. The empires have changed, the wars as well, but Gujarat, that much-conquered land, maybe not so much.

The first intimation of being Muslim for me was, of course, with the Ayodhya agitation and Mr Advani’s rath yatra. It seemed a silly, superficial thing at that time, riding on the popularity of a Doordarshan serial on the Ramayana, but then I was in boarding school, and what did I know? It was my larger family that suffered. A cousin was knifed to death in Hyderabad by a mob while returning from Friday prayers, leaving behind a one-year-old daughter who would not have been able to comprehend death, much less the why of it.

And then another cousin, the dearest friend of my childhood, went to war. This time in Bosnia-Herzegovina, as a Muslim who could not bear to stand by and do nothing when other Muslims were ethnically cleansed for the crime of being Muslims, when concentration camps were set up in the heart of Europe, and the West, which had declared so boldly, “Never again” after the Holocaust, managed to look away. Amir fought for the oppressed. I, whose name is the same as that of the first Muslim to die on the battlefields of Islam, did nothing.

Sympathising and doing nothing… that must surely rank as one of the most important facets of being a Muslim in today’s world.

And of course, being sympathetic to Muslims is suspect. I remember when a member of Akhil Bharatiya Vidyarthi Parishad (ABVP) yelled at me that as a Muslim I was not an Indian, and that I probably cheered for the Pakistani cricket team. There is at least one cousin of mine who did cheer for Pakistan. During the curfew days of the 90s in Kanpur, he and his brother answered the doorbell only to find some men from the Police Armed Constabulary (PAC) there. The PAC asked them to step outside and promptly arrested them for ‘breaking curfew’. It took more than 24 hours for us to locate them, and have them released. After that, my cousin would always support the Pakistani team. Despite my tight-lipped anger, despite the fact that one of my great-uncles was the Major General who set up the National Defence Academy and trained the soldiers who keep our borders secure, despite the fact that another is a Major General who has spent his life fighting wars and conducting counter-insurgency operations from Bangladesh to Sri Lanka to Siachen, I had no ready argument.

And anyway, what could I have explained to my cousin or the foolish young man from the ABVP? You cannot explain integrity, nor can you argue for respect. These things are already lost if you have to fight for them.

Throughout my childhood, my mother would point to a picture of my grandfather’s brother that hangs in our living room. It is a small B&W photograph and all that remains stuck in my memory is the well-kept moustache. “That is who you should aspire to follow,” I was told. A lawyer and judge, Dadaabba’s last assignment was to serve as the Pakistani High Commissioner to India, a position he took on the condition that he not have to accept Pakistani citizenship and be separated from his larger family at the end of his life. He was one of the key figures behind the Nehru-Liaquat pact, which halted our slow slide towards war after Independence.

A tough act for me to follow, even without the moustache.

And yet my cousin’s act is easy to follow. A few months ago, two boys were picked up from my neighbourhood in Gorakhpur. They had been walking down the street in the evening when one of them spotted a bag. When he reached for it to see what was inside, he and his friend were promptly arrested by undercover policemen. By the time representatives from the neighbourhood managed to get them out, it was close to two in the morning, and one of them had been listed in the police records as a Bangladeshi national, while the other was designated a Pakistani.

I would have thought that it was possible to be a Muslim in India. In fact, I helped prepare the British Foreign & Commonwealth Office’s report on ‘Islam in India’, and later, I briefed the incoming British High Commissioner on the same issue. Breaking down the statistics that our government provides through both the Census and the National Crime Records Bureau, I managed to make all sorts of charts and graphs. All of them though, led to the same conclusion: Indian Muslims share almost exactly the same socio-economic indicators as their neighbours in the areas and regions that they live in. The green of Muslims is not the one on our flag: a single separate stripe, but instead is as ubiquitous as the grass: in some places trampled, in some places standing upright; in all places as thin or rich as the soil will allow. In the end all I could say was, “The one defining thing about Indian Muslims, is that they are Indians.”

Yes, there is. However private my faith, however common my fears or aspirations, I am a Muslim and that means something. What precisely it means changes from person to person; to them I may be a believer, a non-vegetarian, a terrorist, or somebody intent on marrying four times and covering each wife in a tent of black cloth. My faith exists in the eye of the beholder.

I remember when I needed to have my papers signed to sit for the entrance tests for Jawaharlal Nehru University’s International Studies programme. The principal from my college (we had had twelve different ones that year, in a long-running battle between the governing board and the staff) was impossible to locate. Since any gazetted officer could sign the papers, I decided to go to the magistrate’s office. The sub-divisional magistrate looked at the paperwork and then asked me a question, “You live in Abu Bazaar. Are you a Muslim?”

I pointed out that mine was a decidedly Muslim name. He handed me back the papers and said, “I cannot sign these.”

It took me a little while to understand what had happened, but by the time my fury had caught up with me, I was already out of his office. Luckily, there was no lack of other gazetted officers who were willing to sign the papers. I ranked seventh across India in that exam, and I am deeply proud of that achievement because I was judged on my capabilities and nothing else.

To focus on my Muslim identity is almost like the travesty of the SDM’s question. Such a question leads inevitably to times of stress and becomes a conversation of complaints. My life has been richer than that. Can we change the subject, please?