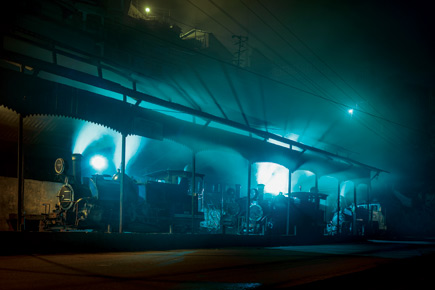 That night, around 2 am, we drove to Garstin Bastion Road in two cars, one trailing the other. The streets were almost deserted, except the trucks that moaned as they made their way to wherever they were headed.

In its concentric circles, Delhi is a city that is trapped. Within its folds, there are stories that change with the movement of the clock. The city becomes a magical place at night, Gavin Evans whispers.

Besides, it is only in the dark that you see certain things. Like the stars. You are in between dreams. Delhi goes to sleep very briefly, he tells me. “Maybe two hours.”

He knows the sleep patterns of cities— Kolkata, Delhi, Darjeeling, Kanpur, etcetera. Evans says he is sentenced to walk the cities and villages in the night. Because the daylight is for everyone. It is only in the night that he begins to make sense of chaotic cities, with his camera. A photographer, tripod in hand, roaming the streets in search of images.

We stand near an old railway coach yard, looking at the windows from where prostitutes are gazing at the streets. After 3 am, visitors don’t walk up the stairs anymore. Those who want to stay the remainder of the night are already there, price paid, and those who aren’t with anybody are seen through the mesh of windows.

Evans crosses the street, and walks up and down, a cigarette dangling from his lips. His partner Michaela Murken and I stand this side, warding off the men who beckon. She is brave. There’s a torch in her hand, and she points it at their faces as if she were shooing away ghosts. She got it in Rajasthan when they visited an accursed palace. Night is a strange time.

The 49-year-old photographer and filmmaker from Europe walks the night, taming it, using it to make sense of cities in their nocturnal hours, without their guard on.

Wires crisscross the lonely streets, bulging somewhere like a beehive, leaning out and becoming almost like serpents, slithering through alleys and climbing buildings. They almost look beautiful, and recur in his images, part of a series he calls Nightscapes. A portrait photographer who has shot David Bowie among others, he says it is his portrait of the country.

“In the night, all is revealed; the fabric of the cities and countryside are bared and exposed. Sidewalks are clear and, from the ground up, the view is uninterrupted. The veins of electricity cables and the flyovers are the lifelines that connect and give rhythm to the images; these are nocturnes. Night is when the other world awakes. The light paints a different picture and the dark hides a different story. It is these unseen and untold stories that fascinate me,” he says.

“The cities are captured every second of every day on mobile phones and cameras. There is nothing I can say or contribute that hasn’t already been done by daylight,” he says. “Nightscapes is a piece of the cultural jigsaw—it occupies a space in the photographic archive of India. Every image tells a story, the narrative is composed of layers upon layers of visual.”

Like the electric cables. He is fascinated by them.

“I can’t avoid the cables. We don’t have them in Europe,” he says.

The series is about the night, and its picturesque solitude. In 2005, he shot another series, Tales of Resurrection, in his hometown in the north of England. He would drive around the industrial wastelands at night, and one night, he came upon a concrete wartime bunker set against a burning skyline of flame stacks.

“The scene was surreal and foreboding,” Evans says. “I got out of the car and ventured inside the bunker. There, I found a dead fox. Someone had purposely placed its body there surrounded by stones—in a kind of ceremonial sacrifice.”

Secrets of the night, for him to find.

“India at night is seductive, evocative and deeply mysterious,” says Evans. “It is also a contradiction.”

Evans landed in Kolkata with Murken one morning in February. Jet lagged after a 14-hour flight, he gawked at the crowded city from his taxi.

“At midnight I rose and ventured out,” he says. “To my amazement the streets were deserted. I was presented with an uninterrupted scene; no traffic or people to obscure my view. Many cities around the world never rest. India by day moves at breakneck speed and, exhausted, it takes a breath for four or five hours before starting all over again.”

Kolkata revealed itself, night by night. Evans slept through the days and walked the streets at night, a camera slung over his shoulder, looking for wires, people sleeping on the streets or precariously positioned on their rickshaws, or those who were awake like him. Murken would be with him, helping out when he sought her. Or she would stand by the side, watching.

“Despite constant warnings, especially while venturing into slums, I have never felt unsafe in India,” says Evans. “The folk I come across are often as curious as I am when they see me.” Besides, he says, Murken is there to protect him.

“India is possibly the most photographed country on earth and trying to do something different or unique is a major, almost impossible task,” he says. “The deserted slums at night reveal a profound beauty hidden in the daytime by the throng of inhabitants; just one example which makes Nightscapes different from other nocturnal documentations.”

He has the curiosity of an outsider, a wonderment that makes him trap layers in his photos. He wonders why a man doesn’t fall off as he snores while asleep with his head perched on the handlebars and his body on the rest of the cart.

There is a jarring collapse of private and public spaces. A photo from his collection frames dogs and humans, huddled together, perhaps whispering their dreams or fears to each other. In another, a lone ragpicker injects himself with heroin, or some other drug, slumped against the walls of New Delhi in the wee hours of the morning. Creatures of the night.

“There is a lot to see,” he says. “There is an incredible tapestry. The camera is able to record so many details, so many things.”

In the slums he visits, like Nehru Colony, he says he is amazed to see such a range of emotions. And then, at night, the slums look forlorn, different.

Although his images are of the streets, Evans says he is not fascinated by poverty like most foreigners who have captured India’s deprivation. Emptied out streets and the transition of a city as it diffuses into the night— those interest him. The nakedness of a city after sundown, undressing almost, while the lover explores its body through his lens.

“It is pornography,” he says.

That night in Delhi, Evans asked me to look for a shrunken garden in a hotel; that’s where he would be waiting. At around 11.30 pm, it was still too early to go out.

Delhi is a confusing city, unlike Kolkata, Darjeeling and the other cities in which he has ventured out at night so far. It is a circle, and there are villages and lost cities within it, cities of memory and nostalgia, and all of these manifest themselves at night.

“Language on sign hoardings varies; even the colour of Ambassadors changes from state to state. Every city is unique; its people, architecture and habits all differ,” Evans says. He hopes that, through his work, “viewers see their world in a new and revealing light.”

We eat tarts and go through his work. Like when he shot a night club called Tropicana in Havana, Cuba. There are the gay and the transexual and the fabulous. There are feathers and sequins and a sense of freedom, which will remain closeted when they go out in the streets.

Then there is the Touch project, in which one of his hands is offered to a subject to do whatever it is one chooses to do with it, while the other aims the camera at the subject’s face and two hands. The project explores the concept of personal space. There is reluctance, joy, hostility.

“It is intense,” he says. “It is about breaking down barriers.”

He has been working on Touch for nine years.

Evans picked up the camera at the age of thirteen. “I came across the portfolio of a neighbour, a forensic photographer whose abstract images of crimes in Bermuda changed everything for me. I understood at once that photography had the power to provoke investigation and the power to change,” he says.

He had a brief stint at Harrow College of Higher Education outside London. Then, he says, he got into the real thing.

“There is nothing I like about taking photographs. The process is painful and deeply introspective. I must know why I point the camera in what direction before I fire the button.”

The ‘in between time’ stretches slowly. At GB Road, it is never so quiet. He waits patiently. Only he knows what he’s looking for, Murken says.

Strains of mujra float in the air, barely audible, but it breaks the silence of that elongated phase.

Just then, he finds it. He turns around, gets inside a yard and fixes the tripod. Then he takes a flash and stands under a banyan tree, lighting up its leaves. Beyond and under it, there is a hutment built on a wall, propped against the tree. Perhaps someone is sleeping there. Perhaps Evans is trying to capture their dreams.