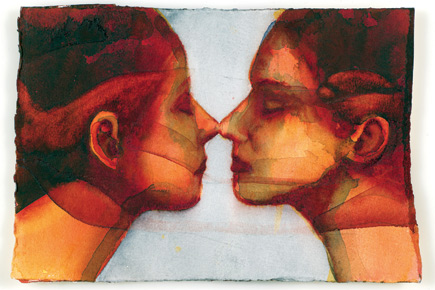 Giving up mirrors for 31 days gave Sonali Kokra the time and space to reflect upon and reclaim her life.

It started in October last year. I’d spent months preparing for those dreaded three months—the Indian shaadi season; that time of the year when you’re supposed to paste million- watt smiles on your face and feign excitement over the impending nuptials of your third cousin, whose ‘friend’ request you accidentally on purpose ‘not now’ed. Nevertheless, you’ll resignedly scrawl ‘sangeet practice’ in your planner across all weekends until the end of December.

New appointments with old dieticians are hastily booked. Yoga pants that were hitherto being used as nightwear finally see the inside of the yoga studio you have a lifelong membership at. Which is great; if the fear of the zipper of your wee-bit tight lehenga giving way mid-dance is what it takes for you to adopt a healthier lifestyle for a quarter of the year, it’s probably worth the heartache.

What’s not worth it is the never- ending scrutiny that girls like me have learnt to accept. It’s easy to identify the culprit when it’s an outsider. Every man who sees you as disembodied parts—full breasts, never-ending legs or a hot piece of ass—is a jerk, undoubtedly; but who do you blame if you’re the one looking at yourself not as a weird and wonderful mix of ideas, eccentricities and imagination, but as a pair of dimpling thighs, a too-wide smile or a frustratingly flabby tummy? Who is going to protect us from our own scorchingly critical gaze? For a long time I thought of this gaze as one of the constructs of my gender— I didn’t question or dispute its existence because I don’t remember a time when things weren’t this way. I’ve always thought of my body as this oddly- misshapen clay vessel that needs just a little more time on the wheel to achieve its perfect shape. Someday, I was going to love my body. Just not now, not today, not while it looked like this. Instinct tells me I’m not the only one who plays this waiting game with the body.

But something changed during Wedding No 3 of Month No 2 of the 2013 shaadi season. It was my second straight week on the wretched GM diet. Before that had been one week of near-starvation. And before that, obsessive amounts of cardio for two weeks. That’s over 30 days of hunger, weakness and exhaustion. My body was unhappy, but I refused to listen to it. And then, a ‘compliment’ and an overheard conversation did me in. An aunt waddled over to chat, “Haaye, you have reduced quite a bit. Very good, beta.” After that, I floated on a cloud reserved for those who’ve been awarded the mother of all honours: ‘Thou hast lost weight, thou art now healthy.’

Healthy. That was the other big word I was forced to confront that night. I overheard a long-lost aunt selling the idea of me as an ideal daughter-in-law to the highly sought-after species that is the proudly smirking mother of an IIT-IIM son. IIT and IIM. In the Indian parental stakes, that’s the equivalent of Sachin’s ton of tons.

“Colour is wheatish fair only… But she is really very intelligent. Achchhi jodi rahegi.”

“Thodi healthy hai,” she admitted apologetically. (What is it they say about eavesdroppers never hearing anything good about themselves?)

That night, as I stood in front of my mirror, the two conversations kept playing in my head. That’s when I realised what was wrong with those two narratives. At what point had I become okay with the glory of ‘reducing quite a bit’ eclipsing everything else that had happened in my life in the past twelve months—an impending book launch, a double promotion, an invitation to teach a Master’s programme at a reputed college, a three-month life-changing travel sabbatical? It was true; I had reduced quite a bit: I had reduced the value of my life and all its wonderful experiences by allowing a number on the weighing scale to become the talking point of my year.

Theoretically, I knew I needed to stop obsessing over what I saw in the mirror, but practically, each time I looked, I only saw more flaws. Dissatisfaction with my physical being was so deeply ingrained that I didn’t know who I’d be if that feeling deserted me. It was like being in an unhealthy- but-addictive relationship— you know you’re better off without it, but you somehow can’t walk away. And when you finally do, you wonder what took so long. That’s exactly what happened with me—I went cold turkey on my mirror for a full 31 days. It was just one month of my life, but it felt, and still feels, like my most radical act of self-love so far.

The first week was unalloyed agony. When I started the experiment, the full import of what it meant to not look at yourself had not quite registered. It didn’t mean not looking at just mirrors, it meant no stopping at glass doors, no selfies, no peering at cutlery. It meant trusting my judgement because there was no way to conclusively know if the outfit I had assembled in my head really worked once I had put it on. And most terrifyingly, it meant being okay with the vulnerability that comes with not being able to control every variable in your obsession. I had to re-programme my thinking to accept the possibility that I might appear phenomenally stupid in public. And even if that happened, it wouldn’t change who I really was.

As I got more comfortable with myself, I began to see just how much I had aligned my world to fulfil this need for self vigilance. I realised I knew exactly how many jewellery stores in the vicinity of my home had mirrors that faced the road. Once, while sitting on a sofa in my own living room, it occurred to me that despite all my wealth, physical comfort remained a luxury I enjoyed only sparingly because each time I’d catch myself in an awkward posture, I’d rearrange my limbs to adopt a more visually appealing pose. It was as if I was living life one Facebook photograph at a time. In the second week of my mirror detox, I realigned my world with my natural state of being. My life wasn’t a stage where I must play a part.

By week three, I realised that if I could attend family functions, show up for dates and make it to investor meetings without caving in, I really was going to come through on my promise to myself. Because I couldn’t see myself anymore, I started believing in others more. When I asked people if I looked okay and they said ‘yes’, I took their word for it without double and triple-checking to make sure. I trusted people to tell the truth. And even if their version of it differed from mine, I learnt to recognise it as a perceptual gap and not an attempt to mislead me. Since I wasn’t hung up about my appearance anymore, I stopped looking at others through that lens as well. I lost the urge to bitch about an attractive woman because I was no longer feeling inadequate in contrast. In small imperceptible ways, my relationship with the people closest to me improved. Not looking at myself helped me reclaim all those forgotten bits of my life that I had trampled upon while chasing an idea of perfection that didn’t exist. Nothing could stop this cheese from moving.

As clichéd as it sounds, I was literally looking at trees and noticing flowers. I could recall details and pay attention to conversations because I was no longer distracted by myself. What’s more, I read more books in that one month than I had in the three before it. But my biggest act of reclamation was the relationship with my body. I finally stopped treating it like a work-in- progress. During work-outs, I focused on how it made me feel instead of how it made me look. The act of eating was relieved of the trauma of counting calories. I bought clothes I liked instead of covering myself in colours and silhouettes that had a slimming effect. For the first time, I was happy with my body, despite its many flaws as decreed by the fashion gods.

Of course, at the end of 31 days, I did look at myself. I’d expected to feel an intense mix of emotions— dread, excitement, perhaps even pride; but all I felt was curiosity. Were all the studies true? Did the feel-good-to-look- good affirmation really work? When I finally looked into the mirror, I didn’t see anything spectacularly different. I looked happier, for sure, and the lines on my forehead didn’t crumple like a walnut at the sight of my midriff, but physically, I looked more or less the same. That was a relief because it made me realise that body-love didn’t mean being sucked into a whirlpool of unhealthy behaviour; it simply meant I had decided to treat my body like a partner I was in a respectful relationship with. And that if I really want my body to change, for whatever reason, being blissfully happy with it is not going to cut it. I’m going to have to work at it.

A few days ago, I met well-meaning aunt No 1, and she said, “Aur thoda reduce kiya hai beta, very good.” She’s right this time too. But this time, only weight reduce kiya hai, not my sense of self.