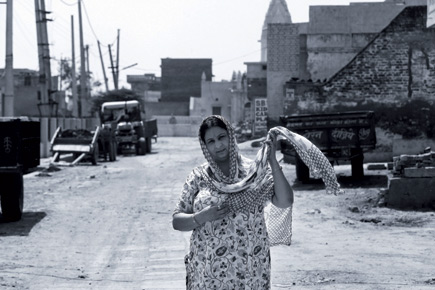 Deep inside Khap land, we are trailing behind a dark grey Innova in a boxy little car. On the front seat of the SUV, sitting next to the driver, her dark glasses glinting in the sun, her phone in her hand, and seeming very much in control of her surroundings, is Sudesh Choudhary, the head of the newly-formed women’s wing of the Satrol Khap in Haryana. She is leading us to Narnaund.

Narnaund in Haryana’s Hisar district is a place that is caught between two worlds. Sandwiched between the towns of Hansi and Jind, it is not a city, but not quite a village either; it is somewhere in between, an ‘emerging city’, according to a Wikipedia entry. Its biggest draw is a centuries-old anaj mandi (grain exchange) that attracts traders from the cluster of surrounding villages, and as if to counter this tradition is Narnaund’s other attraction, a car rental service of BMWs to cater to “the successful and prosperous businessman and businesswoman”.These last two months, Narnaund was in the news on two occasions. A suspected case of honour killing where Mohini, a 16-year-old girl was allegedly killed (strangulated by her own dupatta) and cremated by her parents after she reportedly eloped with a minor boy from a nearby village. She sought legal protection fearing for her life, but it was not enough to save her. So inured are we to extreme news from the khap-ruled villages of Haryana, that the story caused hardly any outrage.

We did take notice, however, when Narnaund was at the centre of something completely out of the ordinary. In April, it hosted a khap mahapanchayat to announce the formation of a women’s wing in conjunction with the lifting of a 650-year-old ban on inter- caste marriages. For an institution beset with patriarchy and known for its feudal mindset—the most derided of khap ordinances have all been against women, banning them from wearing jeans, carrying mobile phones and for suggesting the lowering of the legal age for marriage to avoid rape— it does seem like a turnaround. Expectedly, this sudden claim of inclusion and emancipation by khaps, seen by many as an attempt to whitewash their battered public image, has drawn media attention, and for once, it is not in relation with horrifying accounts of honour killings, discrimination against women, female foeticide and caste-based crimes. In the few weeks since she was picked out for the job, Choudhary has turned into a media stalwart, giving interviews to television and print journalists scrounging for a positive spin on the tired old khap narrative. Already, her answers have taken on a prepared quality.

Dressed in a printed salwar-kurta with dangling earrings and a light trace of makeup, Sudesh Choudhary looks like most middle-aged Jat women do. It is her shoes that give a hint of the power she wields, as she takes long strides in the heeled ankle boots that make for a striking contrast with the rest of her appearance. She belongs to the village of Badli in Jhajjar district, not far from Hisar. Though she has hardly any experience in activism or social work, her family is powerful and well-connected. That has definitely helped in winning the mandate.

Almost like a tour guide pointing out something historic and wondrous, she ushers us with a flourish to a rather unremarkable structure in the middle of Narnaund. As she walks up the steps, she excitedly says, “This is where it happened. This is the chaupal where the decision was taken and I became the first woman in over 600 years to walk these very steps.” According to khap diktats, women are not allowed to set foot inside a chaupal—a common meeting place for village elders and leaders. Inside, a group of aged men are smoking hookahs. The all-male council sits here everyday to address the needs of the villagers. As she swoops down to touch their feet, unhurriedly they stir to life. It is a slow day, with the sun blazing down, and there is not one supplicant in sight. The men go back to snoozing and smoking as we walk away.

We are taken to the house of Ranbir Singh Lohan, who belongs to a prominent local family. In the front hall, a group of elderly men are idling about, playing cards and watching TV. For over five decades, this has been an unbroken tradition—the baithak of village elders that is hosted in this house everyday. There is not one woman about. Soon, more than 20 women troop in, the older ones all in ghoonghat (veil). They have interrupted their day’s work to turn up for the interview, something they are used to doing by now. Living in the shadow of the khap, the older women are not too positive about any radical change. They perceive this for the sideshow that it probably is. The younger ones, not so resigned yet, believe that their lives can change if khaps change, and they can change.

Anisha Lohan is a shy 22-year-old who is studying at the local government college in Narnaund. Like most young women of her age in the village, she can’t wait to be free, to be independent, to start working. For most of these women, the only viable job is to teach in a school. With so many candidates and so few jobs, it helps if your family is networked or can pay a bribe. She is dressed in a pink salwar-kurta with short sleeves. I ask her if she’s allowed to wear jeans. “I would love to. But, people would stare at me if I do. Mahaul theek nahin hai (the environment is not right). Maybe if I live in a city like my brother, I can wear jeans.” Every evening she goes to a park in the village. She enjoys movies but is not allowed to go to Hisar, where the nearest theatre is located. Her mother Roshni gets tongue-tied when I ask her what she wants for her daughter and her expectations of the women’s wing of the khap. After some thought, she replies, “I want her to be married soon. And, maybe if change comes, her life can be better.”

Choudhary intervenes, “Give her two years. There’s a lifetime ahead to be married. Look at me, I’m a village woman but I sent my daughter to study in Australia and now she’s living there by herself. I’m very proud of her. Promise me you’ll give her some time.” The mother nods along helplessly, then says, “But marriage is important too.”

Parvez, an outspoken 20-year-old, chips in. “We’re not allowed to go out much, not even to the market. I wish that would change. I think young women here are changing, but the men are not keeping pace. I will volunteer and support the women’s wing.” She studies in a college in Hisar. When she applied for a police job last year, her uncles stopped her. She will try to find a job as a teacher, even as she dreams of escaping to a big city one day. Like any youngster these days, all the young women here are hooked to their mobile phones, which they use for chatting, texting and Facebook. They laugh at the khap ordinance to take away their phones.

The khaps have found many ways to disenfranchise women. Depriving them of property is one of them. But, when quizzed about women’s right to inherit paternal property, the women tend to close ranks in support of the system. Choudhary says, “If a girl asks for her share of the property, it is not considered a good thing. I don’t support it either, as it creates disbalance. She has a right on her husband’s property; how can she inherit from her parents then? What about the rights of her brothers?”

It is early days for the one-member women’s wing. With 42 villages under it, Satrol is the biggest khap in Haryana. Inder Singh, the sarpanch of Satrol and the man credited with this canny PR move, says, “Just like no house can run without the advice of a woman, the same way, our society cannot function without the advice of women.” But, before we get carried away and truly start believing that khaps support women’s rights, he warns, “I have told [Choudhary] that she can do what she wants when women’s issues crop up, as long as we are consulted on every decision.” I ask him why then did he even bother with forming a women’s wing if the men will take all the decisions, and he replies,“We are the core committee and we have experience which women do not have.” He has given Choudhary instructions to involve more women, as long as they realise that the power of decision-making rests with the men.

Campaigners for women’s rights have raised serious questions about this move. Ranjana Kumari, a women’s rights activist who has written extensively on khaps, is wary of this ‘gimmick’. “Khaps are institutions for men and by men, and they rule over women’s lives. I suspect involving a woman is just a cosmetic change. It will not change the nature and character of these institutions that are deeply patriarchal and casteist. How can women play a role in khaps when they are hardly represented even in democratically- elected institutions?”she asks.

Choudhary, meanwhile, is poised between converting herself into a product for media consumption—she says she is inspired by Medha Patkar and Kiran Bedi; on her Facebook wall she shows me links to all the media coverage she has got—and fighting the good fight. “I plan to cover every village and spread awareness about women’s rights, talk about female foeticide and education for our girls and the freedom to marry whom they want. You can do it smartly, without offending people.”

Civil society groups and the media are often accused of overlooking affirmative stories about the much- maligned khaps even when they stand up against female foeticide or take steps to support female education. While it is natural to look at Choudhary’s story with a degree of scepticism, we might also read it as a small sign of change.