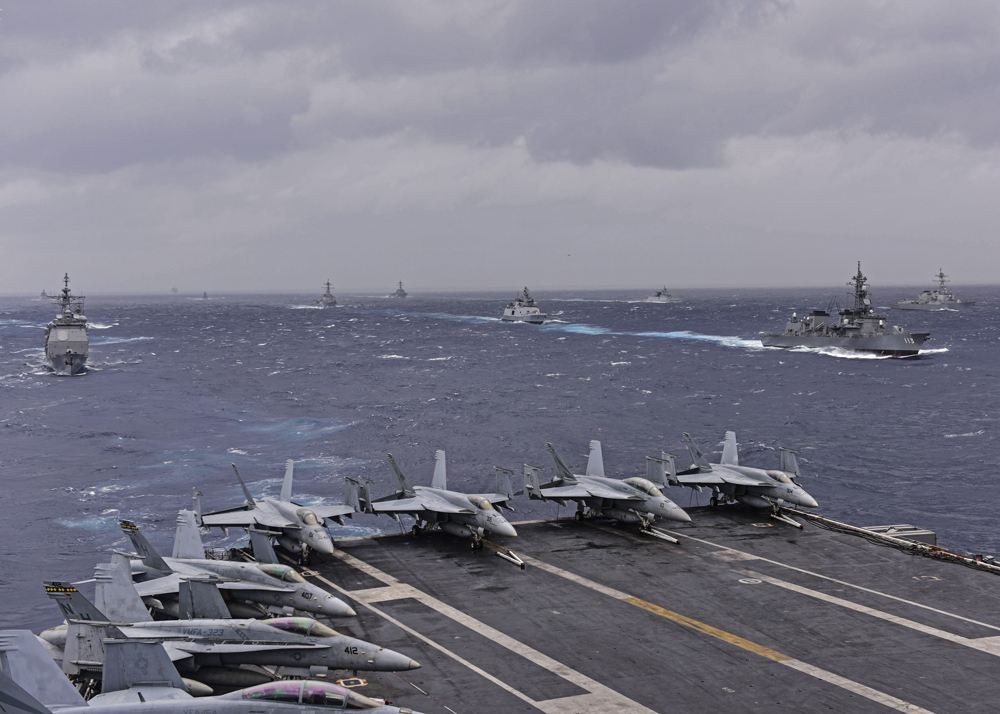 Indian Navy, Japan Maritime Self-Defense Force (JMSDF) and the US Navy during a joint-exercise in Bay of Bengal, 2017 (Photo Courtesy: US Navy)


Governments that run large absolute and relative trade deficits with China and which want to decouple their economies from its vicious stranglehold on them have realised that they are caught in a Catch-22. Businesses in the deficit countries thrive on selling cheap Chinese imports in their domestic markets at very high margins. These margins generate employment, indirect taxes and large welfare payouts that buy assured votes during elections. Therefore, no one wants to end the party because this whole cycle is based on the ruthless exploitation of Chinese labour, which provides the opportunity for the entire world to thrive and prosper. No other labour market in any part of the world can replicate the terms of trade that define the ruthless and exploitative Chinese labour market. Therefore, if the party has to continue, the caterers have to change.

In real terms, this could mean there is a consensus among the leaders of the quadrilateral of democracies, namely Donald Trump, Narendra Modi, Shinzo Abe and Scott Morrison, that Xi Jinping and his supporters have to be removed. They need to be replaced by a less ambitious and more moderate leadership that will continue to maintain the current structure of the Chinese labour market and yet agree to absorb a change in the terms of trade with the debtor nations. This implies that the goods and services supplied by the debtor nations to China will yield higher prices so that their trade deficits with China can start to come down and yield these leaders political dividends within their respective electorates. The loss in this shift of sales that will accrue to the Chinese economy will be borne by the Chinese government by running down its enormous foreign balances and assets to begin with. The rate of future accrual of these assets will also be lowered thereof.

But this is easier said than done. Regime change requires a resolve and a cost that a nation cannot bear by itself. It requires an active consensus-based coalition that functions as a ruthless and decisive cartel does. It appears that Trump has been successful in convincing his other fellow ‘quaddies’ that not only will the US lead this coalition from the front but that it will provide a ready supply of tactical and strategic combat specialists, weapons, ammunition and continuing real-time intelligence and analysis for this massive exercise. The evidence that this cartel of quaddies is in place was provided by Modi’s insouciance vis-a-vis China during his monumental broadcast to the nation on June 30th. The fact that China has amassed troops along the entire length of the Indian border and that India has mirrored this deployment after the June 15th clash and the resulting combat deaths thereof, reveals that Modi’s silence actually means discreet mobilisation is under way. Further, when US Secretary of State Mike Pompeo explained the redeployment of US troops from Germany to other newer theatres where quaddies face PLA troops, he was giving a hint of what lies ahead. The final action of signalling the placement of the icing on the cake was the recently conducted joint naval exercise at the Strait of Malacca by the Indian and Japanese navies.

Wars boost demand, spur industrial production, encourage consumer activity, reduce inventories and if the added bonus is a change in the terms of trade for the victors, then they are the right panacea for the times. In my essay of June 17th (The Chinese Endgame), I had predicted that the countdown for global war would start by June 30th. Readers will observe the unusually tough line that the Indian army is taking with the PLA at the ongoing talks near Chushul in Ladakh. The PLA is mystified at this unusual toughness that is being displayed by the Indian army. There does not appear to be any accommodation offered by the Indian army as its political masters are bolstered by tangible and demonstrative US commitments this time round. Last time in 2017 at Doklam, there was a drawdown and vacation of positions by the Indian troops as summit diplomacy was proposed as the panacea. However, the summit diplomacy turned out to be coercive as Modi discovered what Neville Chamberlain felt when the latter shared face-to-face moments with Hitler. This was followed by the Covid-19 pandemic and the consequent global slowdown and the emergence of Joe Biden as the frontrunner for the November presidential election in the US.

Trump emerges as the wild card variable in this complex matrix. He has to rally the independent US voters with a tangible victory over Xi’s China very soon. Will Xi attack the vital 13 microprocessor foundries of the Taiwan Semiconductor Manufacturing Company in Taiwan with a precision-guided missile surgical strike? Will the three US navy carrier groups then take out all mainland China’s microprocessor foundries followed by a quad-implemented naval blockade of the Malacca Straits and the Lombok Straits? Will the PLA launch successive waves of rocket attacks against the Indian army in Ladakh followed by crippling cyber attacks against key quad installations?

Interestingly, all the four members’ of the quad—the US, India, Japan and Australia—were members of the eight-nation force that fought against China in 1900. That action, known as the Boxer War, ultimately led to regime change in China a few years later. The fight was over trade and trading rights. Is history set to repeat itself in 2020?