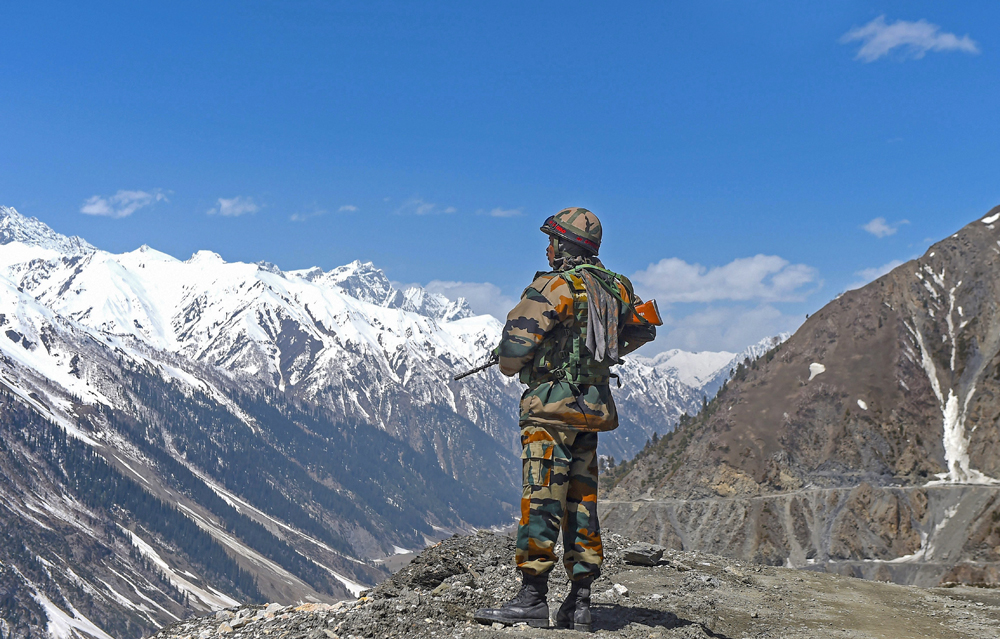 From the hazy opium dens of Beijing’s Zhongnanhai district where the leadership of the Communist Party of China (CPC) resides, a new weapon of war has emerged. This weapon, derived from the period of the Eastern Zhou Empire (770-256 BC) when the concept of ‘world domination’ was first conceived by China, is now being used by the People’s Liberation Army (PLA) in Pangong Tso and the Galwan Valley. This is the primitive ‘club’ ringed with barbed wire and used to bludgeon to death one’s enemy in the new age of ‘cyber, space and algorithm warfare’.

But why use the club? Chinese strategy is to first ‘warn’, then ‘threaten’, then ‘intimidate’, then ‘attack’ and finally ‘dominate’ the enemy. The warning was issued last year in October 2019 at Mamallapuram by Xi Jinping when he told Prime Minister Narendra Modi to speedily resolve the Jammu and Kashmir issue trilaterally among India, Pakistan and China. Modi ignored the warning. The threat was issued when the PLA started crossing the Line of Actual Control (LAC) in large numbers in early April this year. The Indian bureaucracy found false comfort in dubious Russian reassurances that it was merely a PLA military exercise and things would soon go back to normal. The next step was the intimidation at Patrol Point 14 on the Galwan Heights on the night of Monday, June 15th when the PLA executed a pre-meditated attack on an unsuspecting Indian patrol out to verify the withdrawal of the PLA back to its base several kilometres behind the LAC. So far, official figures place 20 Indian soldiers brutally killed by Chinese treachery.

It is my assessment that the fourth stage of the five-point Chinese strategy, which is the attack, will occur anytime between June 30th and September 30th if India does not agree to trilateral talks.

What is the Chinese endgame?

The Chinese fear that what they did to India by building multiple runs of the river hydro projects on the Brahmaputra, so as to control the flow of water at will, India will do to them, too, on the Indus river and its key tributaries, namely the Shyok, the Nubra and the Chang Chemo rivers. This strategy, if adopted by India, will put in jeopardy the Chinese dams in PoK, namely the Bunji, Diamer Bhasha, Dasu Dam, Patan and Thakot dams. They wish to secure all these rivers in Ladakh and push India west of the Indus.

Further, by taking control of the Siachen Glacier in 1984, India negated the terms of the Sino-Pak border agreement of 1963. The Chinese wish to negotiate afresh and to their advantage the boundary between the Karakoram Pass and Indira Col which is in India’s legal and rightful possession since 1984.

What will be the next Chinese move?

The next Chinese move will be coordinated with the Pakistan Army.

As a first step, the Chinese will make a thrust towards securing Daulat Beg Oldie.

The second Chinese attack will come from the Shaksgam Valley to the Urdok Glacier and then onto Indira Col.

The Pakistanis will attack the Siachen Glacier and create diversionary fronts along the Line of Control (LoC) and all the way down the International Border (IB).

What are the options for India?

There are military, political and economic options available for India.

– Start with talking to the Chinese and then acquiesce in trilateral talks with Pakistan and agree to surrender sovereign Indian territory to both these nations without a fight. Or

– Abrogate the 1954 Panchsheel Treaty, the 1993 Border Peace and Tranquillity Agreement (BPTA) and the Sino-Indian Memorandum of 2003 signed by Prime Minister Atal Bihari Vajpayee in 2003

– Recognise the Tibetan government in exile in Dharamsala and unshackle the political chains that have bound the Dalai Lama. Let him address Tibet from the pulpit of India.

– Push the case for autonomy of Hong Kong at international forums.

– Push the case for the Uyghur Muslims at international forums.

– Step up the political and military nature of the Quad.

Let the Indian armed forces do their job and place a parliamentary all-party committee for oversight so that the loyal opposition of the Indian republic is on board.

– Freeze all Chinese investments in Indian unicorns and put on hold all voting rights and cross-border reporting relationships.

– Open up opium exports from India.

Modi faces his true tryst with destiny at this hour of trial. His China policy of appeasement is in shambles. He should remember his public reaction when two Indian soldiers were beheaded by Pakistan at the LoC in 2013. Destiny has placed a karmic challenge before him. Is he going to follow Churchill and restore India’s glory to where it deserves to be or is he going to slip into Chamberlin’s cloak and acquiesce before Emperor Xi?