The Closing of the Muslim Mind 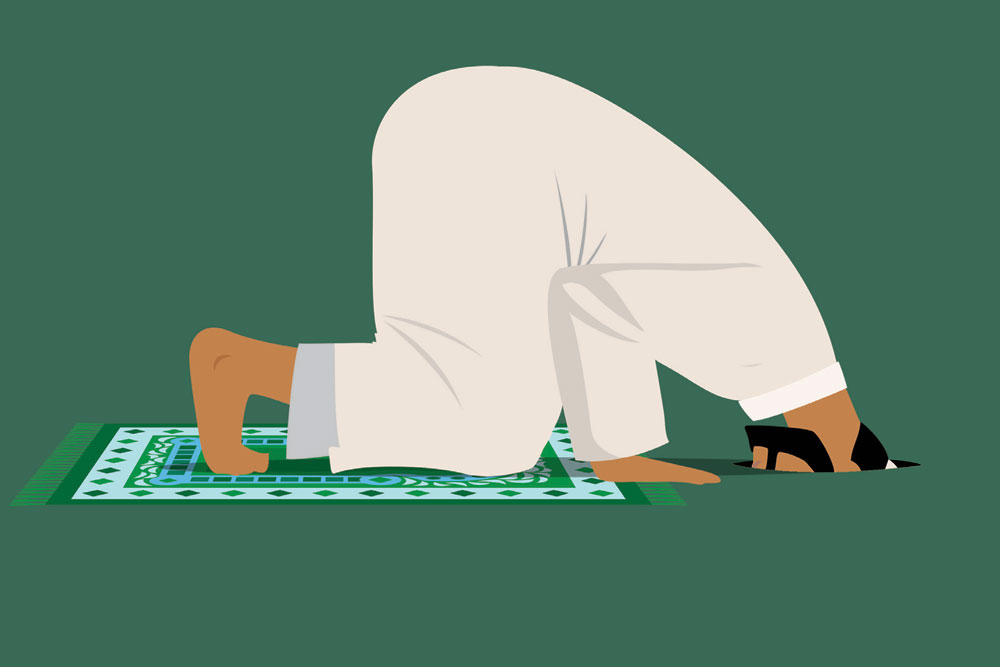 
A FEW MONTHS AGO, The New York Times carried an article by Turkish writer and academic Mustafa Akyol titled ‘The Creeping Liberalism in American Islam’, in which he pointed out an interesting irony. While the American Right, he wrote, was paranoid about ‘creeping Shariah’, which it feared threatened the American way of life (‘put all women in burqas and all adulterers to death’), conservative Muslims, on the other hand, were worried about a ‘creeping liberalism within American Islam’ as they watched a young generation of American Muslims move away from traditional Islamic view on social issues.

No such worries for conservative custodians of Indian Islam though who continue to set much of what passes for ‘Muslim agenda’. On major issues of concern to the community, it is they who set the tone while the liberal rump struggles to be heard. Indeed, it is often asked if there is at all such a thing as a liberal Muslim. In my book, India’s Muslim Spring: Why Nobody Is Talking About It?, published five years ago, I quoted a Hindu friend saying that the idea of a liberal Muslim was an ‘oxymoron’.

“I have yet to meet a devout Muslim who doesn’t have fundamentalist views. And mind you, I’m 70-plus and have known at least three generations of Muslims,” he said.

His remarks sounded too much like a sweeping generalisation about a 180 million-strong diverse community. And had I not known him as well as I did—a progressive and a Muslim well-wisher—I would have suspected him of anti-Muslim prejudice and stereotyping. Some readers accused me of providing a platform to Islamophobic voices; a few suggested I had made up the quote to spice up the text.

The truth is that barring a few caveats, he was not too far off the mark. A liberal Indian Muslim is a rarity, judged by the generally accepted definition of liberalism—open mindedness, respect for human rights, free speech, right to dissent, tolerance of individual freedoms and lifestyle choices, gender equality, etcetera.

Of course, all Muslims are not fundamentalists (the majority remains moderate) but the opposite of fundamentalism and not subscribing to extremism is not liberalism. In critical areas, such as sharia reform, women’s equality, individual freedoms, free speech, openness to other interpretations of Islam, even comparative moderate Muslims struggle to take a liberal stance.

Remember the uniformly hysterical Muslim reaction to Salman Rushdie’s The Satanic Verses? It has been 30 years since its publication but Muslims have still not forgiven him for ‘insulting’ Prophet Mohammad; Rushdie remains the most hated figure among Muslims of all stripes.

One key touchstone of liberalism is how you respond to the persecution of ethnic and religious minorities, particularly if they are persecuted by members of your own faith. Liberal Hindus consistently stand up for Muslim victims of Hindu fanatics but it is rare to see Muslims raise their voice against the plight of non-Muslim minorities—Shias or Christians in Pakistan; Christians and Yazidis in the Middle East; or Kashmiri Pandits nearer home. We spring into action when fellow Muslims are in trouble but shrug off the plight of non-Muslim minorities in Islamic countries. It is an astonishing attitude to take for a community that itself is a victim of religious prejudice and rightly expects others to stand up for it.

“In my view, a liberal Muslim is one who is open to not just other interpretations of Islam but also other religious views as well. He or she is not someone who praises liberal Western leaders, such as Jacinda Ardern, for the exemplary solidarity with Muslims, yet does not utter even a whimper of protest when Christians, Hindus, or Muslims belonging to other sects are persecuted in Muslim countries. Unfortunately, there aren’t many liberal Muslims of this kind today,” says Faizur Rahman, an Islamic researcher who runs the Chennai-based Islamic Forum for the Promotion of Moderate Thought.

The irony is that even as Muslims have become more educated and acquired a modern lifestyle (there’s now a significant aspirational and professionally successful Muslim middle class), they have become less—rather than more—liberal contradicting the the idea that ignorance and educational backwardness cause illiberalism.

Indian Islam has a long and well-documented history of liberalism but the past 70 years, in particular, have seen a steady erosion of its liberal roots. According to Delhi-based historian Irfan Habib, the liberal core within the Indian Muslim community has “shrunk over the years”.

“Even during the nineteenth century, we had a large section which could debate and discuss in writing issues related to Islam. They were allowed the space to say what they felt like saying. Today, that seems to be not so easy.”

We’re witnessing the closing of the Muslim mind which has created a huge intellectual vacuum allowing “discrepant dogmas”—as Maulana Abul Kalam Azad put it—to go unscrutinised. There are few influential Indian Muslim public intellectuals, or Muslim thinktanks promoting liberal ideas. The argument I frequently heard while researching my new book, Who Killed Liberal Islam?, was that you need “right conditions” for liberalism to flourish, and the current climate is not conducive to liberalism. To which my response is: Islam, regarded as the most liberal faith at the time of its inception, was founded in conditions of extreme illiberalism—a period known as jahiliyah (the Age of Ignorance) because of its association with widespread illiteracy, narrow-mindedness and prejudice. If Prophet Muhammad had waited for the “right conditions”, Islam might have never been born. Waiting for the “right conditions” is like waiting for Godot who, of course, never comes.

A familiar Muslim refrain is that the problem is not a dearth of liberal voices but that they’re deliberately suppressed to create a perception that they don’t exist. The media in particular is seen as the chief villain with its penchant for playing up fundamentalist views to produce headlines.

There’s also much quibbling over the definition of liberal

ism. For my book I had a big problem getting a straight answer to the question: Who is a liberal Muslim? It makes most Muslims suspicious; they see it as an attempt to box them into binaries of liberal/illiberal and good/bad Muslims. Several prominent self-proclaimed liberal Muslims declined to be interviewed.

Some object to ‘hyphenating’ liberal and Muslim and reject the term ‘liberal Muslim’ altogether separating their faith from their broader worldview. “I am a liberal and a Muslim; and a Muslim and a liberal, in no particular lexical order,” says JNU academic Amir Ali.

By the way, has anyone noticed that the Muslims touted as the liberal and progressive face of the community have as little to do with Islam as the so-called ‘champagne socialists’ with socialism? It’s a small English-speaking urban elite of mostly left-wing, non-practising Muslims (many chest-thumping atheists) with the most tenuous of links with the mainstream community. And zero grounding in Islam or understanding of Islamic issues. Jean-Paul Sartre would have called them ‘inauthentic’ Muslims, a term he used to describe this kind of liberal Jews.

By the way, has anyone noticed that the Muslims touted as the liberal and progressive face of the community have as little to do with Islam as the so-called ‘champagne socialists’ with socialism? It’s a small English-speaking urban elite of mostly Left-wing, non-practising Muslims (many chest-thumping atheists)

Towards the wider Muslim community, particularly practising Muslims, their attitude is one of a mixture of condescension and contempt. The community, in turn, has no love lost for them and regards them as “outsiders”, not to be trusted as honest brokers. Their aggressive secularism and sweeping criticism of Muslims who are not like them has alienated even moderates. The cause of Muslim liberalism and reforming Indian Islam would be better served by leaving it to those who are better equipped and better placed to do it— namely, the moderates within the community. Instead of dismissing them as ‘soft fundamentalists’, we should support them in the very difficult task they are trying to do in a challenging environment. India has a long history of Muslim reformers who were deeply religious (the sort our left-liberal set would have turned their noses at), and in fact used religion to sell their reforms—Sir Syed Ahmed Khan, Zakir Hussain and Abul Kalam Azad, just to mention a few household names. I devote a whole chapter to these pioneering homegrown reformists who didn’t allow their religiosity to stand in the way of progress.

Finally, many reasons are given for a lack of Muslim liberalism but few ever mention the biggest elephant in the room: Islam’s own long history of conservatism. Contrary to the popular narrative that a historically tolerant Islam has been suddenly ‘hijacked’ by extremists, the reality is that liberal Islam lost out to extremists very early in its history (in fact, in the very first century of its founding). Although it has had sporadic comebacks, notably under the Ottomans, it has mostly struggled in the face of challenges from its right-wing dissidents though the sort of violent extremism we are seeing now is new.

Today’s Saudi-funded Wahhabis come from a long line of an anti-liberal, anti-reform and intolerant strain in Islam introduced by Kharijites, a militant sect that believed in the most austere form of Islam premised on a literalist reading of the Quran and Sunnah—teachings and practices of Prophet Mohammad—which together form Sharia. Sharia, or rather its popular interpretation that it’s immutable, is the biggest stumbling block to any serious reform. But all is not lost.

Tunisia is a good example of how Islam can be adapted to modern times without undermining its essence and fundamental teachings. Although governed by an Islamist party with a legal system based on Sharia, it has the most progressive laws on women’s rights and freedom than any other Islamic country. This contradicts claims that Sharia is ‘immutable’. If Tunisian Muslims can do it, there’s no reason why other Muslims can’t.

I will end this essay with a ‘liberalism test’ for Indian Muslims: if they’re stranded on a desert island with no prospect of being rescued and faced with the task of building a new society from scratch, what kind of society will they seek to build? A liberal and secular one? Or, one shaped by the idea of Muslim ‘identity’? And if they were to stumble upon some non-Muslim native settlers, how would they treat them? As equal partners in building a diverse community? Or, as infidels?

Which way they swing —choose faith as the building block of a new Muslim-majority community, or take the liberal and secular path—will be a measure of their liberalism. On the basis of historical precedents, our fictional island is likely to end up as a Muslim Republic of some kind. Remember, Pakistan was not founded by raving mullahs but by a Western-educated liberal elite promising a secular and multicultural state. Even more egregious is the case of Bangladesh, a child of a secular revolution gone rogue.

But don’t blame it all on Muslims. A lot of it is down to the inherent illiberalism of Islam as it has evolved and is practised, and the often hostile political environment in which they live doesn’t help.