What will Syama Prasad Mookerjee make of his home state today? 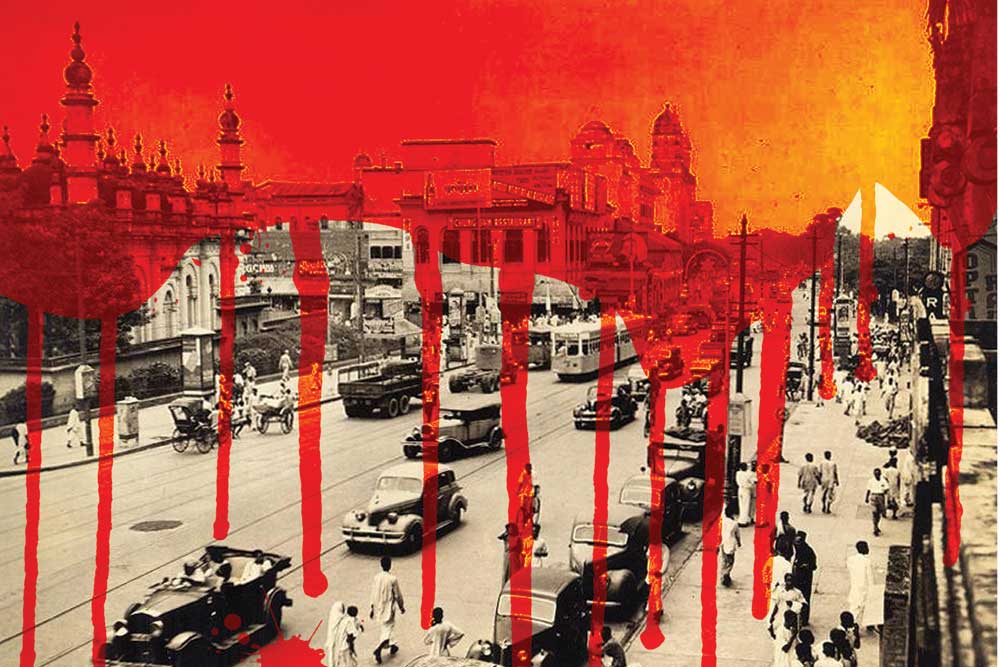 
IF AN IDEA FROM BENGAL, even an obnoxious one, sweeps the land, can Bengal be said to have won or lost? Does the triumph of the seed Syama Prasad Mookerjee sowed when he founded the Bharatiya Jana Sangh be regarded as the victory or defeat of his philosophy for his beloved motherland?

I hear echoes of Syama Prasad’s resonant “Ek desh mein do vidhan, do pradhan aur do nishan nahi chalenge” (A single country can’t have two constitutions, two prime ministers, and two national emblems) when Narendra Modi opposes Article 370 for Jammu and Kashmir. I also know that every Indian province had a prime minister until the republican Constitution came into force. In no way did this celebration of India’s multiple identity damage national unity. I know too that the rise of the Jana Sangh’s lineal descendant, the Bharatiya Janata Party, has meant an upsurge of ghar wapsi, love jihad vigilantism, gau rakshak lynchings and other forms of populist violence even in previously non-communal Bengal. Judging by Syama Prasad’s principled opposition to the Quit India Movement because it would create public disorder, it is clear he would deeply have deplored the Sangh Parivar’s turbulence.

Many shades of grey divide black-and-white. In adversity Mamata Banerjee may wonder who are her friends and who, her foes. Bengal’s chief minister gloats that the chair needs her more than she needs the chair. But which chair? She has sat in so many that one is never sure which she prizes most. If she wants to return to the National Democratic Alliance (and nothing is impossible in politics), she must reinvent her Brahminical credentials. If she still nurses hopes of one day assuming the kursi in South Block, at the head of a victorious Mahagathbandhan that includes some variant of the United Progressive Alliance (be it ever so disunited and unprogressive), she must first unite Bengal’s 91 million people (2011 Census) behind (or under) her.

Every politician needs a base. Hers has been crumbling under her sandalled feet almost ever since a packed Indian Chamber of Commerce meeting in Kolkata applauded her as she roundly abused Jyoti Basu. Many of those tycoons still financed Basu’s Marxists in return for the sanctions on which big business thrives in a country that the Index of Economic Freedom calls ‘mostly unfree’ and places 129th out of 186 in the freedom list. But she was the shining hope of the future. That didn’t happen. As a consequence, big business has as little affection for Banerjee and her Trinamool Congress as it did for Basu and the CPM.

Kolkata has always been a comprador city. Huseyn Shaheed Suhrawardy, undivided Bengal’s last premier, who dreamt of an independent Bengal governed from Kolkata, wasn’t even Bengali. He traced his name to Suhraward in Iraq and his lineage to the Prophet. Suhrawardy thought Kolkata had been “built up largely by the resources of foreigners, inhabited largely by people from other provinces who have no roots in the soil and who come here to earn their livelihood, designated in another context as exploitation.” For Lord Curzon, Kolkata was “a European city set down upon Asiatic soil”. A local newspaper, The Englishman, declared more bluntly, ‘Calcutta is a purely English city’ that ‘belongs and has always belonged to the English, and the native community in it is simply a foreign and parasitical community which would cease to exist if the English were to abandon it.’


Kolkata has always been a comprador city, Huseyn Shaheed Suhrawardy, undivided Bengal’s last premier, who dreamt of an independent Bengal governed from Kolkata, wasn’t even Bengali

Although two local grandees, Maharajadhiraja Sir Bijay Chand Mahtab of Burdwan and Nawab Sir Khwaja Salimullah of Dacca, joked that “Marwari” was “More-worry” as their numbers spiralled by 400 per cent between 1890 and 1920, neither was Bengali. The first Mahtab was a Punjabi Hindu businessman. Dacca’s nawabs were Kashmiri Muslim traders. Leslie Claudius and Leander Paes, Usha Uthup and Jangal Santhal, Banerjee’s own valued aide, Derek O’Brien—plucking out names at random—are not natives either. Kolkata is the only Indian city with a Chinatown. Some 60 per cent of Darjeeling’s population is ethnic Nepali. Bengal’s Bhutiyas, Lepchas and Santhals have no other home. Michael Carritt of the Indian Civil Service who had a second string to his bow as the Communist Party of Great Britain’s secret emissary to the Communist Party of India and hob-nobbed with the likes of PC Joshi, “could speak or understand no Bengali at all”.

As the BJP raced neck and neck with the Trinamool Congress, Banerjee may have regretted the cosmopolitan liberalism that allows Bengal to embrace outsiders as favourite sons. Everything is up for grabs in that freebooting tradition. About 25 per cent of Bengal’s population is Muslim. I am surprised that even 5 per cent of them reportedly voted for the BJP. At least 15 per cent of Bengal isn’t Bengali at all. This non-Bengali, mainly Hindi-speaking, share goes up to 40 per cent in Kolkata. Amra Bangali, an organisation that tried to replicate Shiv Sena exclusiveness, was soon squeezed into silence. Saroj Mukherjee, for eight years the ruling Left Front’s chairman, was deeply pained at my suggestion that revolution forgotten, the CPM was reduced to Amra Bangali wielding Hammer and Sickle.

Zhou Enlai’s comment after his education in Japan that language is an instrument of colonialism resonates in both Bengals. Visiting Comilla in the 1960s, I was struck by the contempt that East Pakistan’s emerging upper middle class affected for West Bengalis. “We gave our lives for Bengali,” Civil Service of Pakistan cadets told me over dinner in the circuit house, “but you left it to Tamils to resist Hindi imperialism!” More loyal than the king, Dilip Ghosh, Bengal’s BJP chief, proclaims his cow-belt affiliation by chattering away in Hindi on national television. Yet, Syama Prasad was Calcutta University’s vice-chancellor when Rabindranath Tagore delivered the convocation address in Bengali for the first time. Tagore also let loose “a volley of Sanskrit” to Oxford’s Latin citation when it honoured him with an honorary doctorate. Perhaps he was influenced by the first Lord Sinha, Britain’s only non-White hereditary peer, who must have caused eyebrows to rise in 1919 by introducing his Sanskrit motto Jata Dharma Stata Jaya to the College of Heralds and House of Lords.

If Mamata Banerjee still nurses hopes of one day assuming the kursi in South Block, she must first unite Bengal’s 91 million people (2011 Census) behind (or under) her

Expecting a saffron-robed Pragya Singh Thakur to loom over him in Bhopal, Kamal Nath dismissed the BJP’s appeal as “just Hindutva, nothing else”. With ancestral links in Kolkata, Madhya Pradesh’s chief minister knows that many Bengalis accuse Banerjee of histrionically appeasing Muslims with her hijab, namaz and khuda hafiz. Her latest offence was to appoint Firhad (Bobby) Hakim, with no municipal experience, mayor of Kolkata. Before that she announced stipends of Rs 2,500 and land for house construction to 30,000 imams and muezzins. Trying to repair the damage, she got Hakim to promise Rs 380 to Brahmin priests per corpse at the cremation ghat but this was too little too late. Given the tension, Amit Shah was probably applauded for calling Bangladeshi immigrants “termites”.

But the enlightened Bengali’s ingrained aversion to Sangh Parivar would not have evaporated so easily if it hadn’t been for gnawing economic discontent. Banerjee succeeded in ousting the Marxists after 34 years mainly because their land reforms and minimum agricultural wages had created a revolution of expectations the Left Front just didn’t understand. Watching Indian society’s avid upward spiral, I found this blindness unbelievable. More than 50 years ago, I spent a few days in the Punjab Agricultural University in Ludhiana. The students were all sons of farmers selected because they showed promise and on the understanding that they would take back to the field their university-acquired skills and enrich Indian agriculture. Not one boy was willing to return to farming. Everyone wanted a clerical job in the Block Development Office, which was the highest their gaze rose in the 1960s.

Today, they would probably aspire to Customs or Excise which, I am told, are more prized than the IAS and IFS for their earning capacity. Whatever the target, it should be clear to politicians and planners that village boys with a smattering of education yearn for white-collar jobs and middle-class respectability. Having driven Tatas out of West Bengal, Banerjee found herself hoist with her own petard. Bengal voters who ditched her have yet to discover that the BJP hasn’t created too many jobs either.

It’s said that when the Second World War ended, the French foreign office, the Quai d’Orsay in Paris, received a frantic cable from Monaco asking for the immediate despatch of two Communists. Impoverished during the war, the tiny principality didn’t qualify for aid under America’s generous Marshall Plan unless it was seen to be battling communism. A wise New Delhi could be to teeming South Asia what the US was to ravaged post-war Europe. India is the world’s largest democracy although, surprisingly, the Prime Minister is uncharacteristically coy about the ‘wonder that was India’, to borrow AL Basham’s memorable phrase. He has said nary a word about membership of the CoD—Community of Democrats—since 2000 or his own previous Government’s $32 million gift to the UN Democracy Fund. A curious reticence seems to prevent Modi from broadcasting to the world that compared to Vaishali, which was the world’s first republic in the 6th century BCE, Greece is a mere bacchha so far as democracy is concerned. Vaishali being in Bihar, perhaps he fears that too much attention might go to Nitish Kumar’s head.

Expectedly, electors in this sanctuary of faith and hope spurned all other contestants to select the BJP’s Veena Devi for the Lok Sabha. Veena Devi embodies the pride that cutting across political frontiers, unites Modi with Indira Gandhi. Apparently, Pakistan’s General Zia-ul Haq was somewhat shy of meeting Gandhi at the 1983 non-aligned summit in Delhi because his critical remarks about her had been reported in the press. Fearing she had taken umbrage, Zia began with a stammered apology about being misquoted when she cut in sweetly, “Don’t worry, General sahib, I never believe the newspapers. They are calling me a dictator and you a democrat!”

Bengal’s move from Red to Green to Saffron has been likened to the Vatican turning into the Kremlin in the old Soviet Union. Had Syama Prasad been around, he might have quoted Gopal Krishna Gokhale’s “What Bengal thinks today, India thinks tomorrow”. The problem is that while Bengal thinks, cow belt India acts. Sarvepalli Radhakrishnan thought Syama Prasad “was catholic in his sympathies and broad- minded in his outlook”. Patriotism is not merely love of the land in which we are born, he said; it is respect for the ideals that sustain us. He understood that man’s spiritual dimension can develop in many ways that are “Indian and not merely Hindu”. The Jana Sangh’s founder recognised and respected that cardinal feature of India’s heritage. Can that also be said of those who claim some share of his political mantle?